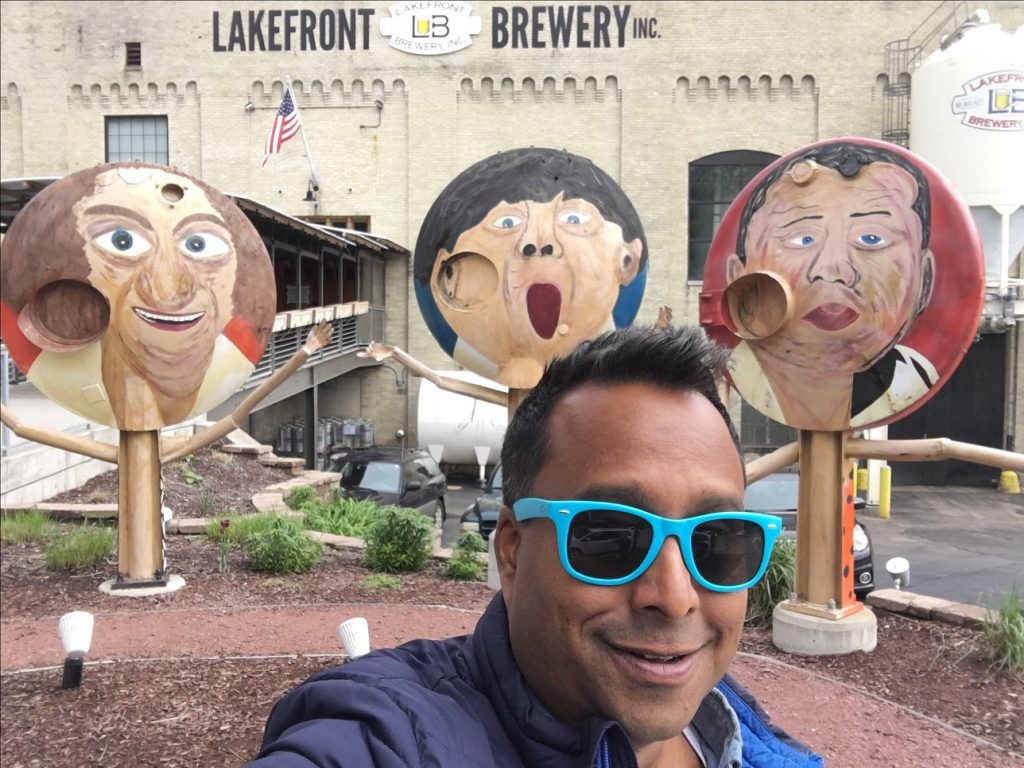 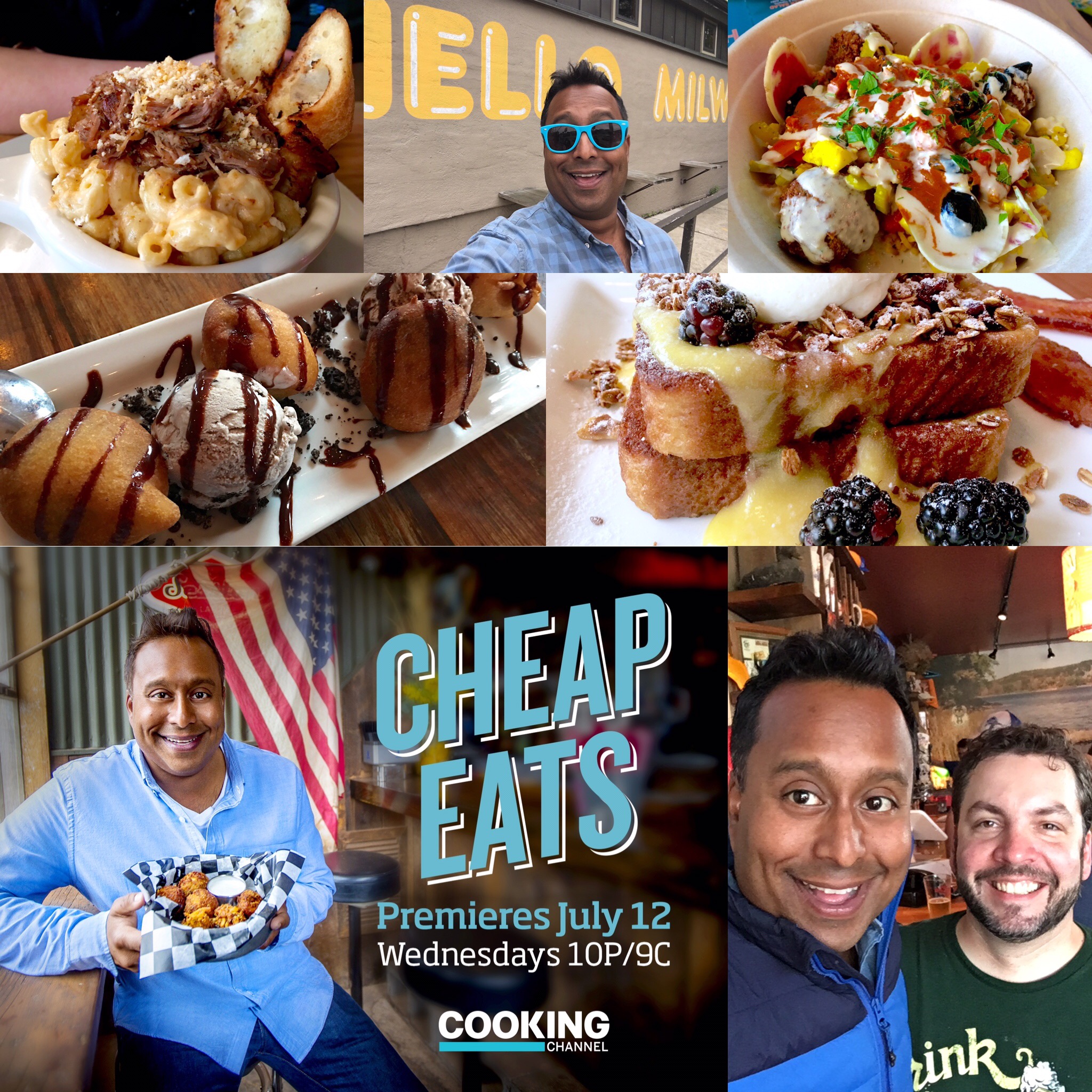 Oh Milwaukee, you easy going blue collar Midwestern city you. Visiting a town like this makes me feel proud to have been reared in the Midwest. For all my adventuring on the left coast, I smile bright when I get to sing the praises of a Midwest city that could make a well heeled San Franciscan a little envious, at least on the food front. But the Bay Area is all about being pricey these days and you and me are all about that Cheap Eats life. Well let me tell you, in Milwaukee you can have your chef driven falafel, deep fried Oreos, pulled pork adorned Mac ‘n Cheese and cheesecake smuggled in French Toast and make it through the day for under $35. Is your mouth watering yet? Well alrighty then; let’s take a big bite into Cheap Eats Milwaukee!! 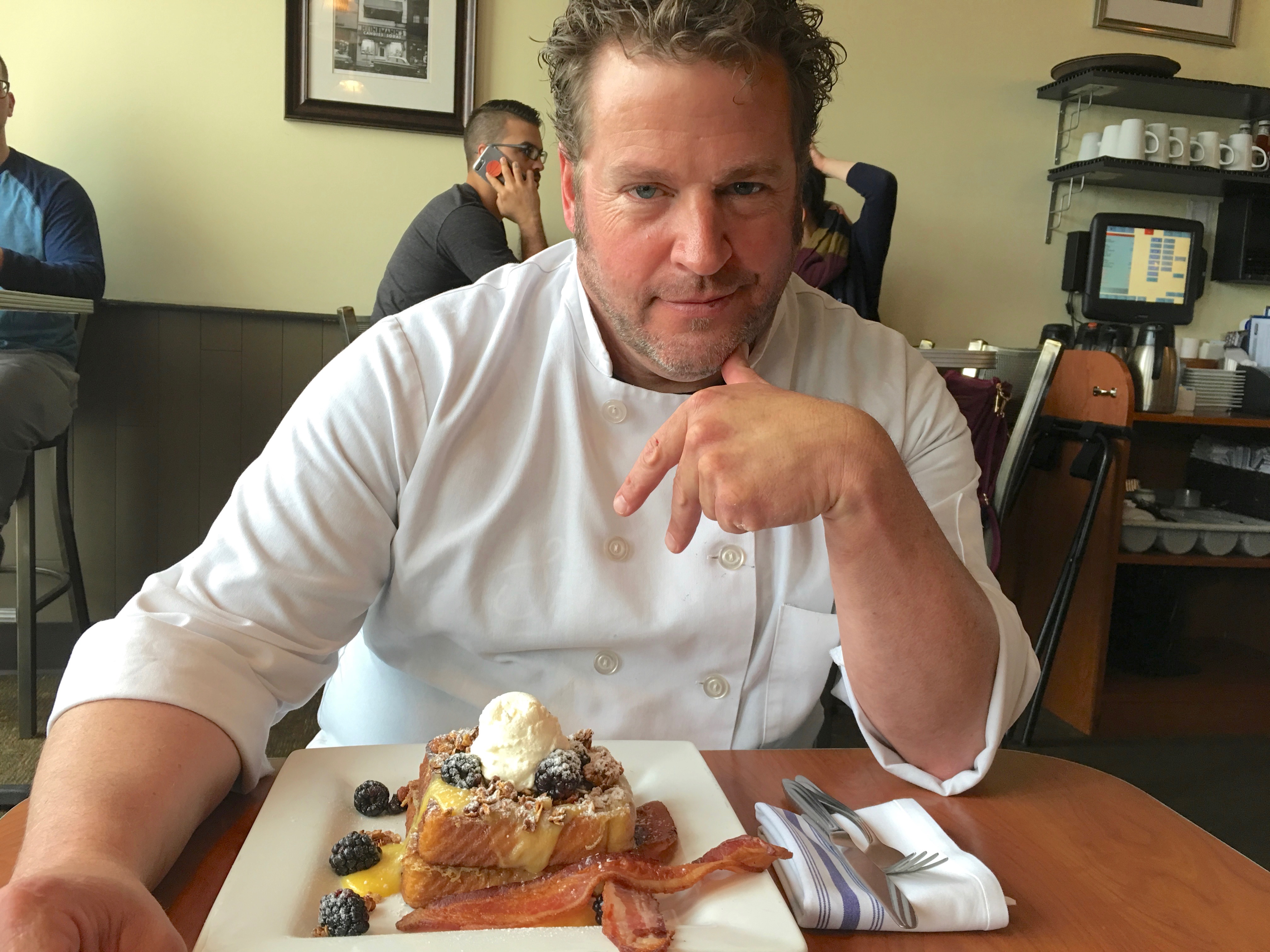 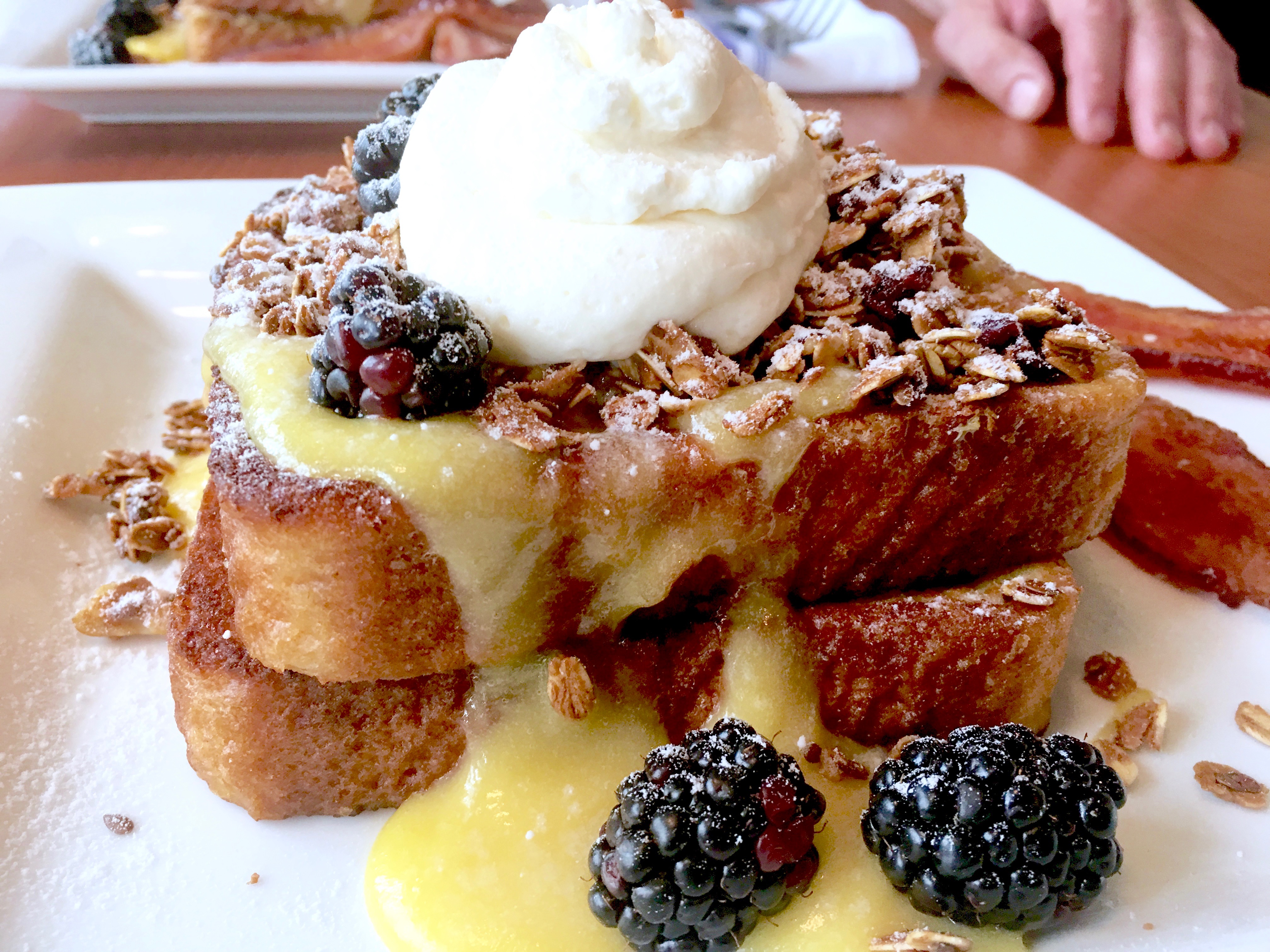 The Vitals:
the spot: Blue’s Egg 317 N. 76th st Milwaukee WI 53213
the eats: Lemon Cheesecake French Toast
the bucks: $11.50
the full nelson: cheesecake for breakfast is no longer a sin

Slowly but surely Cheap Eats at breakfast is converting me into an AM sweet tooth kinda guy. I love me some steak ‘n eggs but the more memorable versions are never cheap. However, when one tussles with a few extra bucks and a talented chef armed with weapons of dessert for breakfast, you might find yourself becoming a savory eater starting at lunch. On the chef front, lets talk about Chef Joe Muench who spent decades in Milwaukee’s fine dining scene, manning the stoves at Grenadiere’s and Eddie Martins before setting his sights on breakfast. This man understands the fundamentals of cooking but I know what you really care about: a breakfast spot worth waiting an hour or two for. Blue’s Egg ain’t hurting for business and you will feel that while you anxiously awaiting for your table. But the wait is for good reason: this place is crowded with loyal fans.  A gentlemen waiting for his breakfast scoffed at me that Blue’s Egg ain’t cheap. But folks, I mean look at that French Toast above and tell me you wouldn’t drop $12 for it. The blackberries were in season, the bacon of top quality and locally sourced and that French Toast could pass for a new flavor at Ben and Jerry’s. Yes, the lemon cheesecake French Toast at Blue’s Egg was indeed “worth it”. Now let’s see how I made up for my cheesecake breakfast sins at lunch. 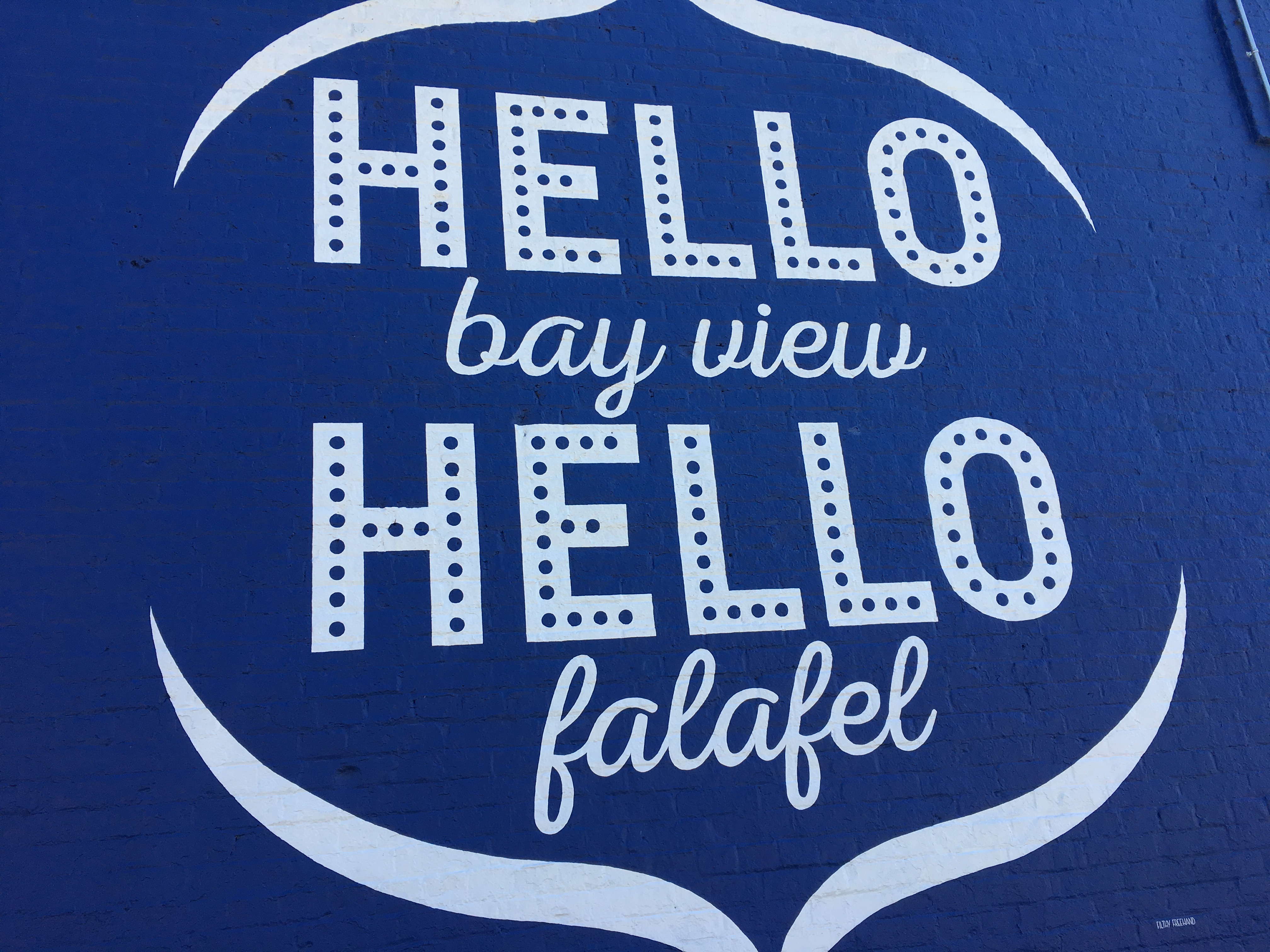 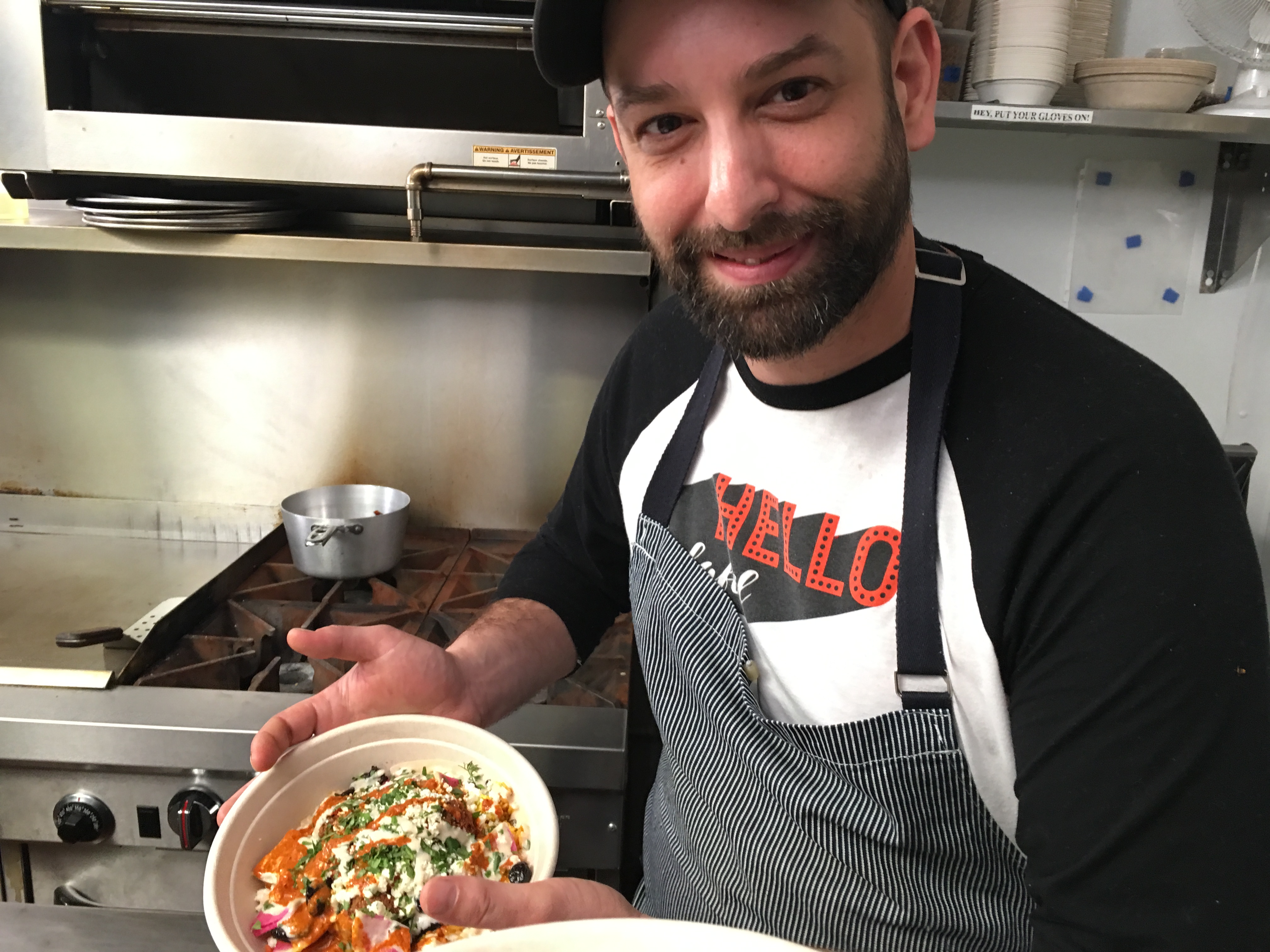 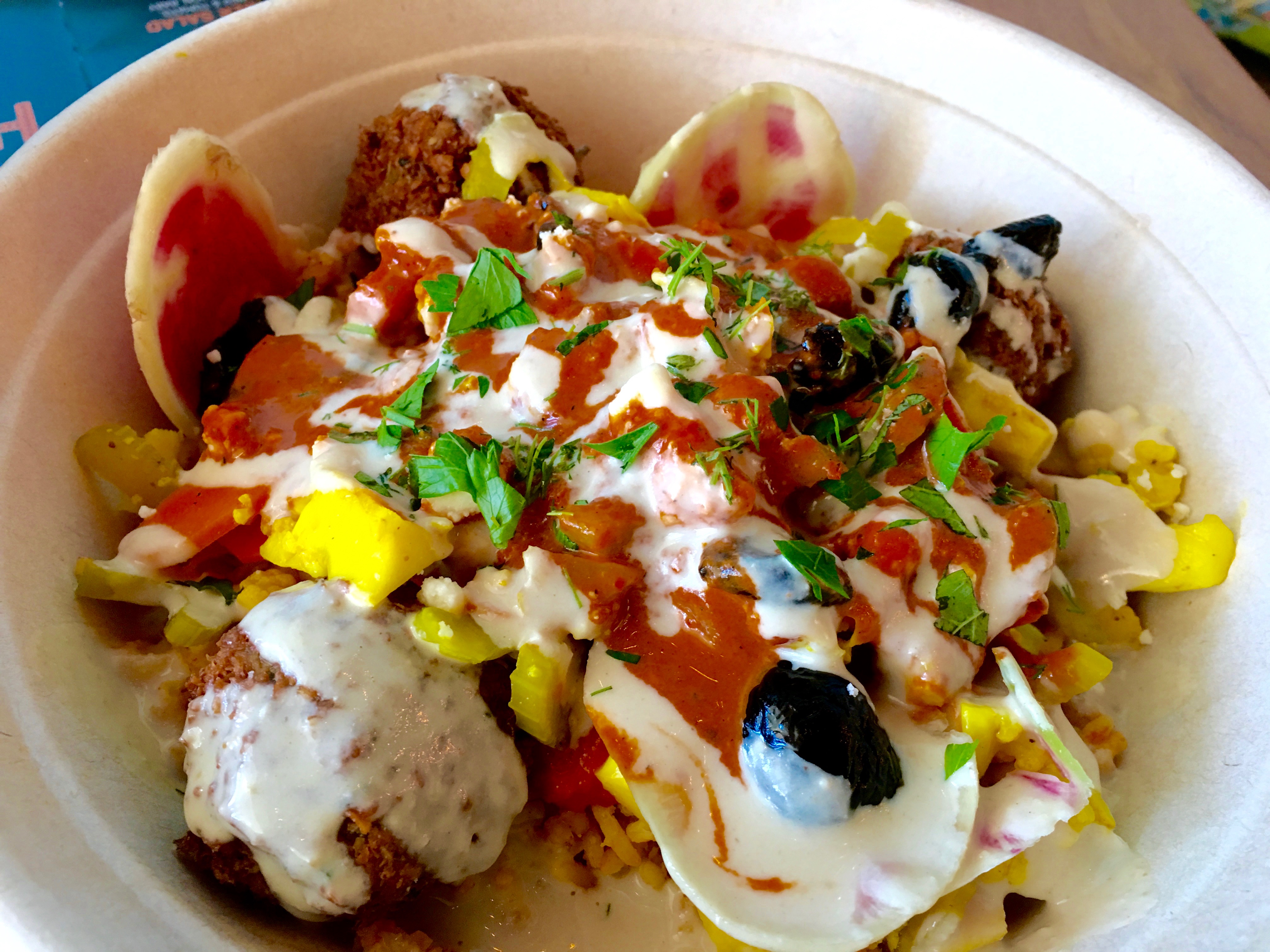 After you finish your first meal at Hello Falafel you will walk away saying “they had me at hello”. Actually it will probably hit after your first bite; it’s just that good. Now Milwaukee may not scream falafel like say NYC, LA or Detroit, but make no mistake; Hello Falafel can throw down with a Mamoun’s(NYC) or Dune(LA) because they cook their falafels to order. They may not be traditional but it doesn’t matter when a guy like Chef Ross Bachhuber is working in the kitchen. A fine dining chef who recently introduced Milwaukee to locally sourced, chef driven small plates; his second venture, Hello Falafel, is an outlet for his creative side. And creative he does get like spiking the Moroccan sauce harissa with chiles typically found in Mexican salsas like Guajillo and Arbol. Did I mention that the harissa is just one sauce on this dish? Don’t forget the green lemon tahini or the slightly meatier piquillo pepper puree. Need some acidity? Here comes some pickled cauliflower, carrot and celery. This falafel dish being a “bowl” you would expect some rice, but saffron carrot rice? Oh and Chef Ross throws in olives and feta, and suddenly my Middle Eastern falafel treat just went Mediterranean.  Like I said, not exactly traditional but exactly the type of flavor forward vegetarian cooking that can keep me sated and for $8 bucks, also keep my budget intact. 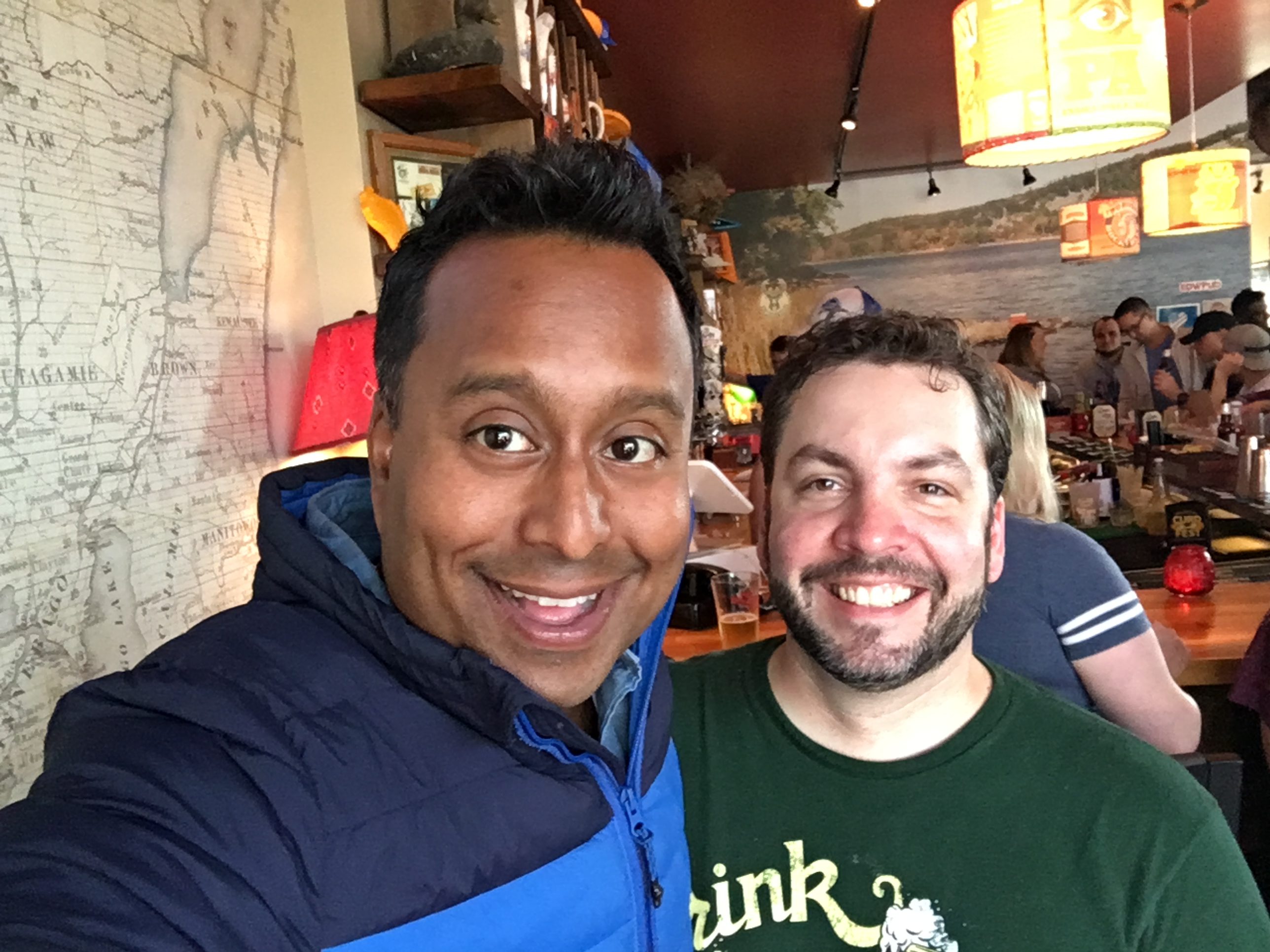 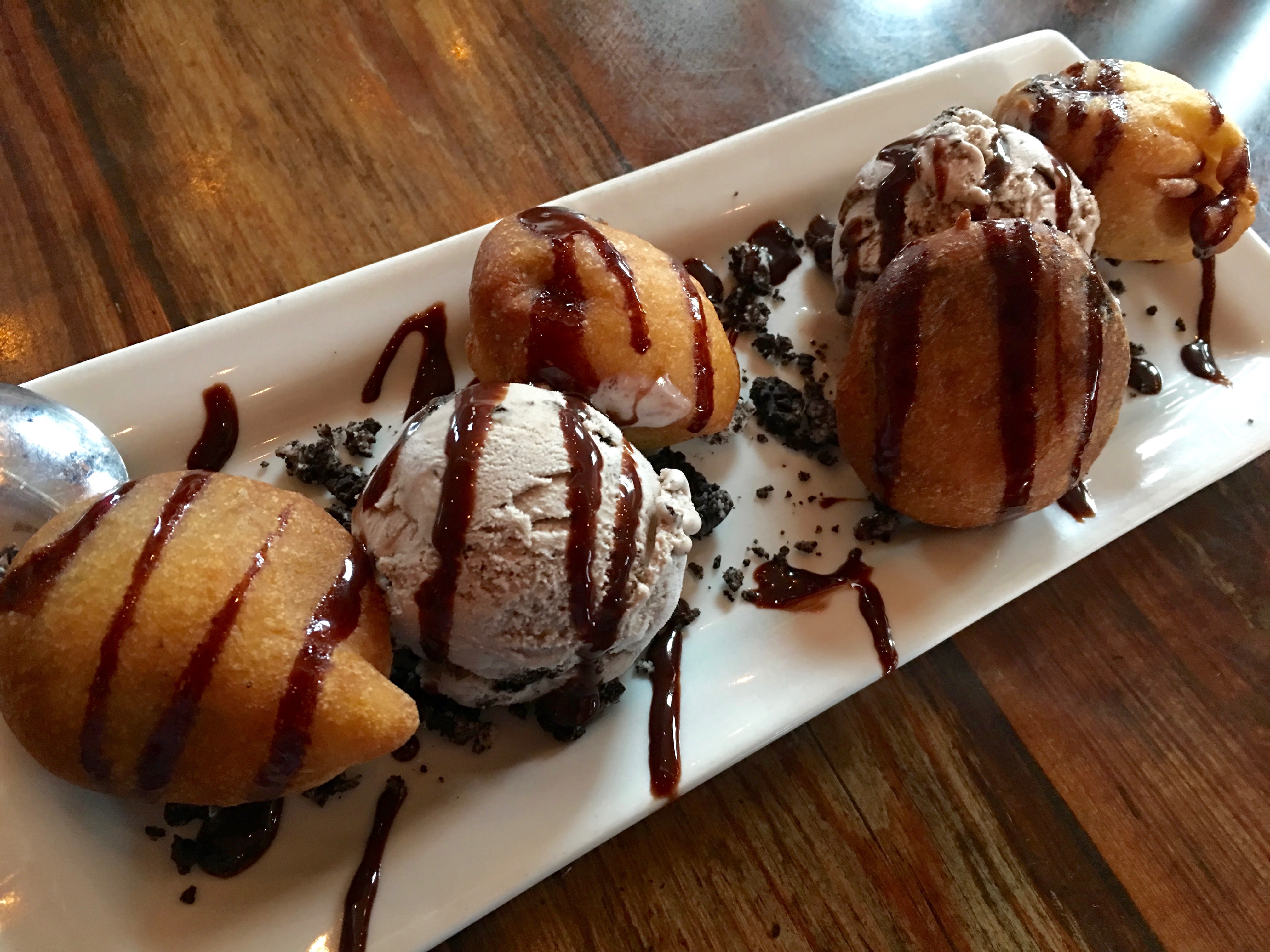 When a dish is named State Fair, you would almost expect my colleague Noah Cappe of Carnival Eats to step in and take the reins but this deep fried Oreo was meant to be all Ali Khan baby. As strange as it may sound, I am unversed in the ways of deep fried snack foods. I mean, the deep friend Twinkie has certainly caught my eye but usually the giant turkey leg snags my hard earned bucks at the county fair. Well unlike your typical county fair, the deep fried oreos at Drink Wisconsinbly pop like a plated dessert. Not surprisingly, Chef David Sapps cut his culinary teeth in the fine dining world of Chicago but that point fades quickly after you sink your teeth into one of these deep fried Oreos. I mean, pretty plating and the ice cream chaser aside; eating a deep fried Oreo is like eating a brownie and a donut at the same time. I’d pay $5 bucks for that any day of the week. 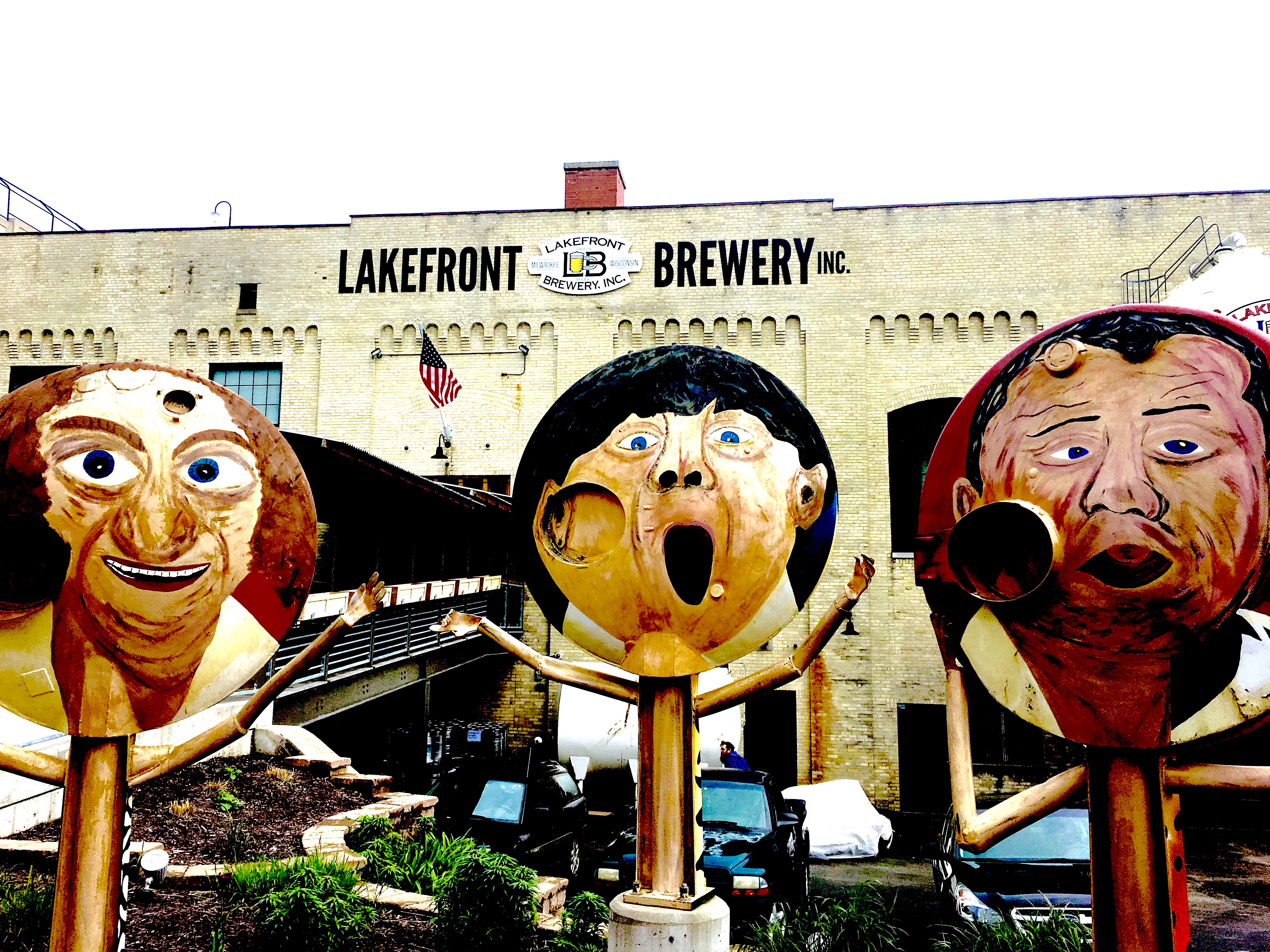 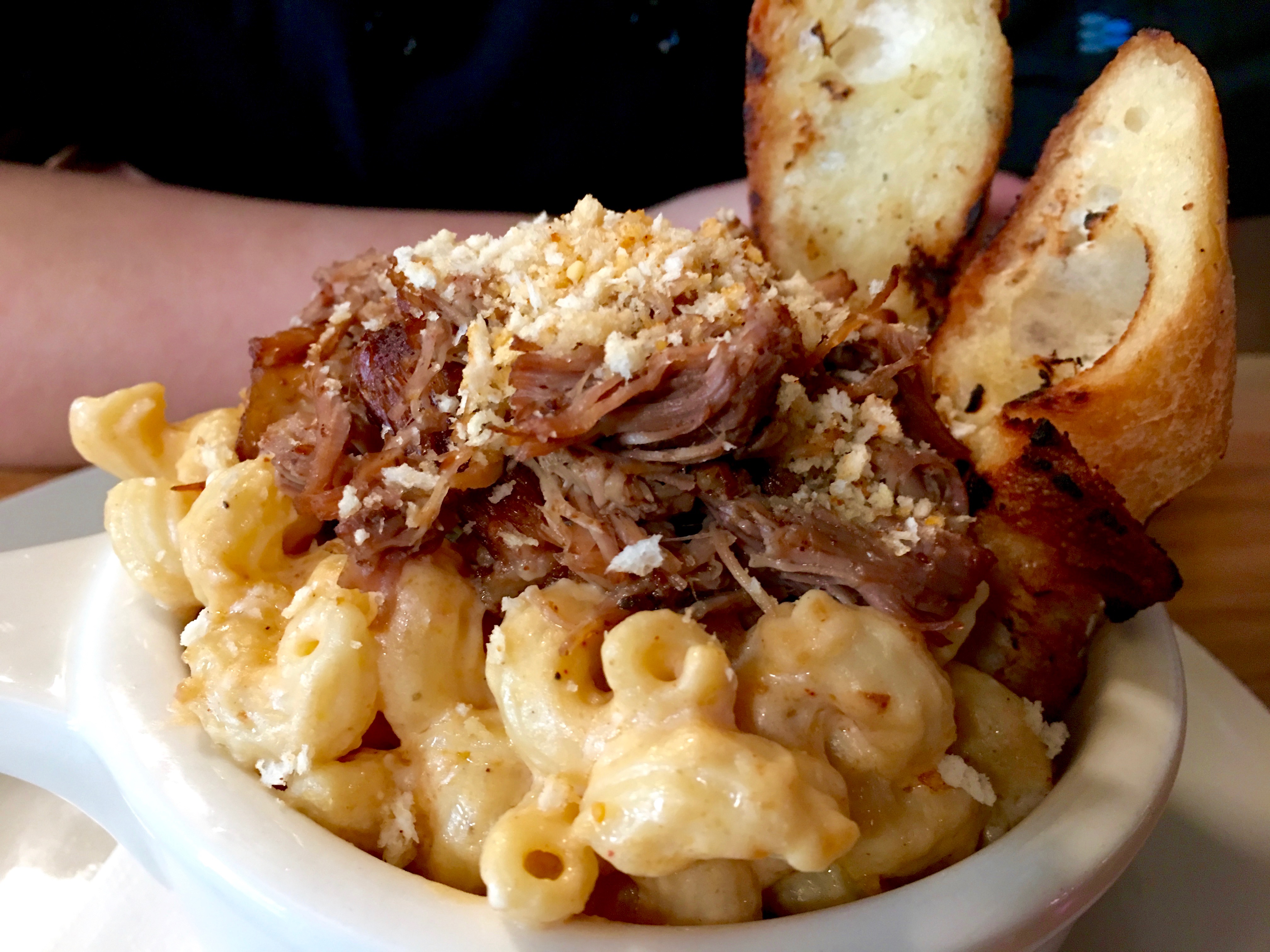 The Vitals:
the spot: Lakefront Brewery 1872 N. Commerce st Milwaukee WI 53212
the eats: WI Mac & Cheese
the bucks: $8
the full nelson: How could I come to Wisconsin and not get my cheese fix?

After my thoughts turn from the Fonz and Laverne and Shirley, I usually think of cheese when I think of Wisconsin. And I don’t just mean Green Bay Packers fans rocking the cheesehead hats either. So it was inevitable that I score a cheesy meal at some point in Brew Town, and what better place than a brewery. Beyond the big beer names like Miller and Pabts, the craft beer scene is alive and well here. And where there is beer, there is bound to be some good food too, so we went to Lakefront Brewery. Now Cheap Eats has seen its fair share of enriched Mac n Cheese meals(Luella’s Southern Kitchen in Chicago) but chef Kristin Hueneke’s cheese sauce was something else. First off we are talking about a five cheese sauce here consisting of two aged cheddars, gruyere, gouda and parmesan. The parmesan just might be the most compelling of them all as it is chock full of glutamates giving that signature “umami” or intense savory flavor. If this sounds a little overwhelming, its because it is and I found the bites of pulled pork to be a refreshing distraction from the intense cheese blend. P.S. that pulled pork was rubbed in cocoa and braised in two beers, the darker of which imparted a wonderful bitter bite. The pork reminded me of Mexican Molé, the Mac ‘n Cheese, of a childhood I should have had if I was raised by cheesemongers and I got out the door for only $10 bucks. 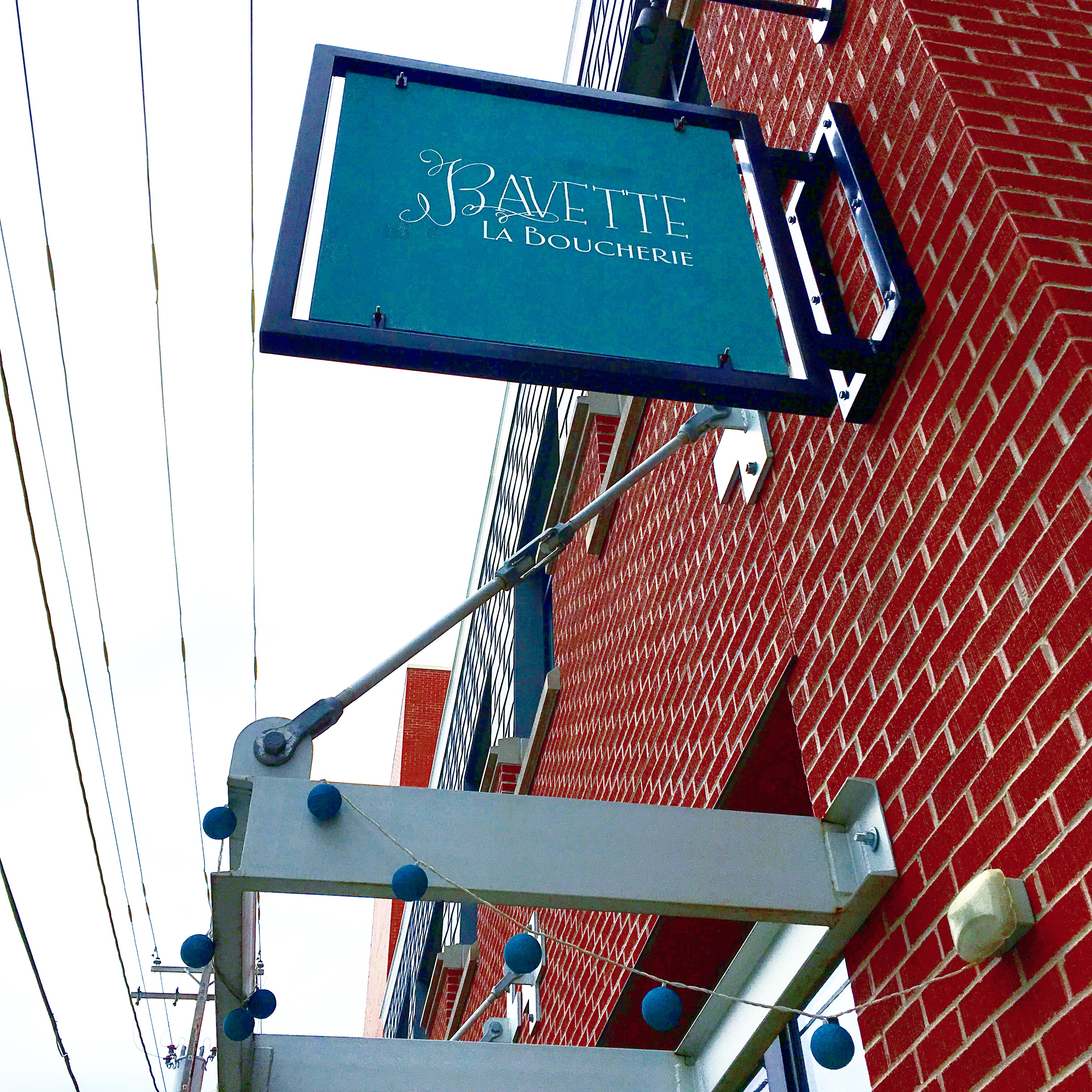 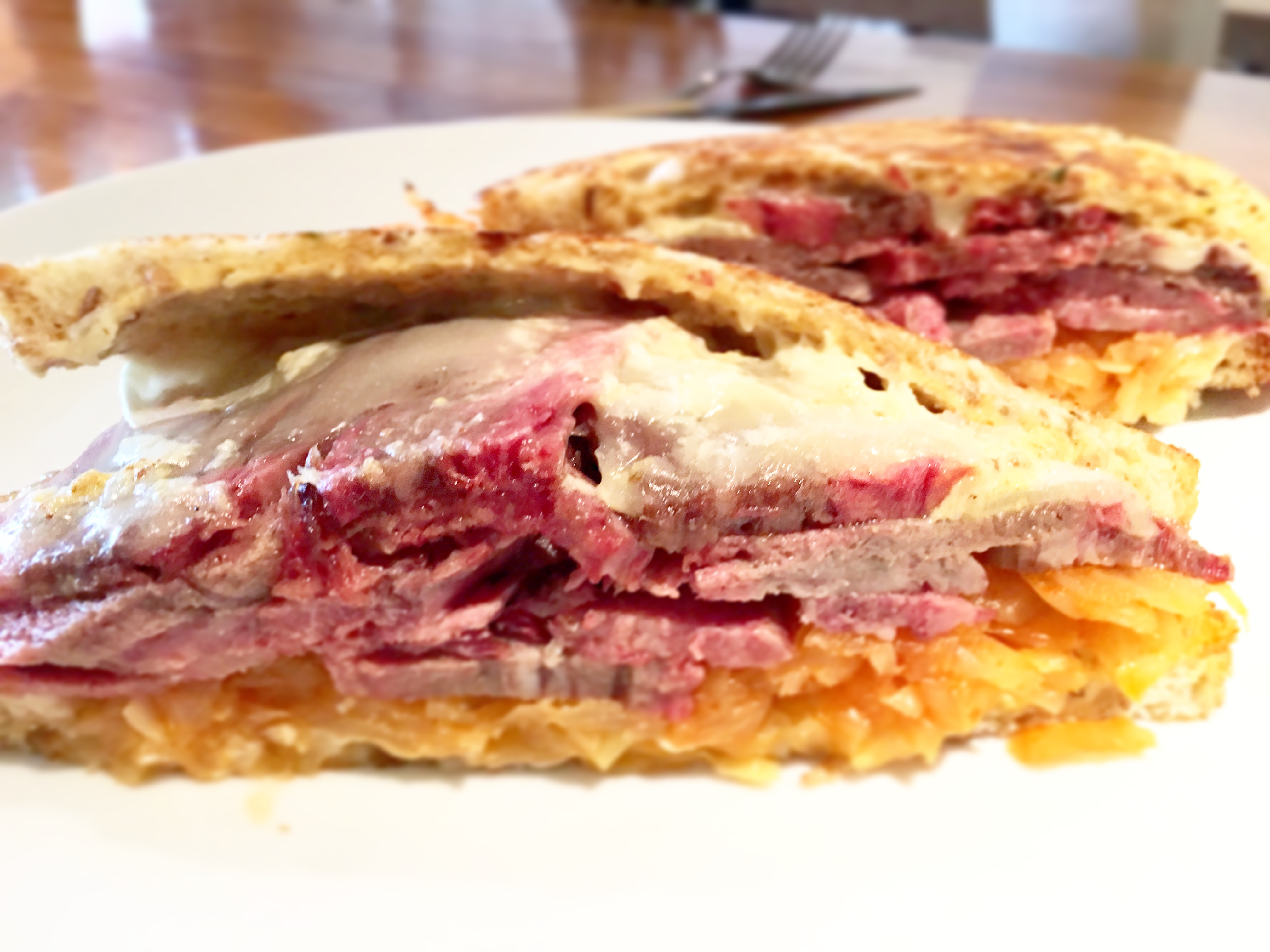 When I wasn’t off trying to score my day of Cheap Eats, I took a day off to discover the best reuben I have ever had in my life. Of course, like many great discoveries, this was purely accidental, unintentional and of course life changing. Bavette is an artisanal butcher shop that also is a café; a perfect storm for a guy like me. Top quality meats sourced from local farms and a menu of sandwiches, sausages and occasional burger nights. The day I rolled into Bavette, I was feeling particularly famished. This was one of the rare times where I had skipped breakfast and needed brunch between the buns to sate my formidable belly. Now I do love me a good corned beef sandwich and frankly, top quality corned beef don’t need no stinkin’ cheese but we ain’t talking corned beef, we are talking corned beef tongue. Yes friends, the rules of engagement have changed. Beyond a perfectly griddled slice of rye and a mustard seed aioli, the reuben at Bavette features a spicy sauerkraut, reminiscent of kimchi that suited perfectly to the buttery beef tongue’s irony after taste. I know offal is not for everyone but believe me this is a superbly cooked beef tongue and the sandwich by design makes more sense than any other reuben I have had. Literally one of the best things I have ever ate. 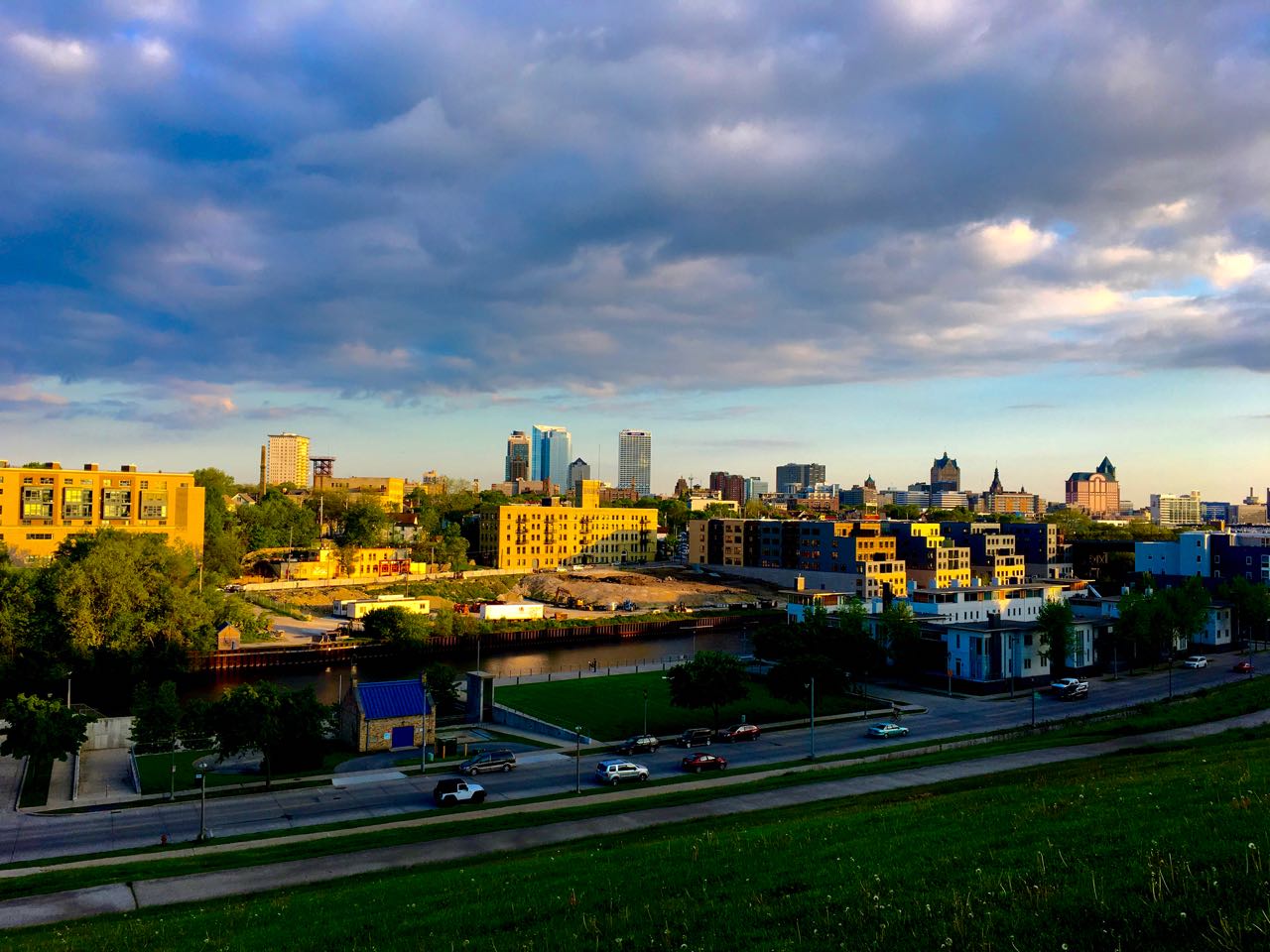 And that is Milwaukee folks. A fine blue color Midwestern city with an active foodie culture that is well tuned to our current food renaissance. You might think this place is all about cheese, brats and beer and you wouldn’t be wrong. But it is also a city in 2017 that cherishes diverse flavors as much as stick to your ribs foods. And they are darn fair about the prices too, don’t ya know. Yeah, you knew I had to throw at least ONE in there.

2 responses to “Milwaukee in requiem”