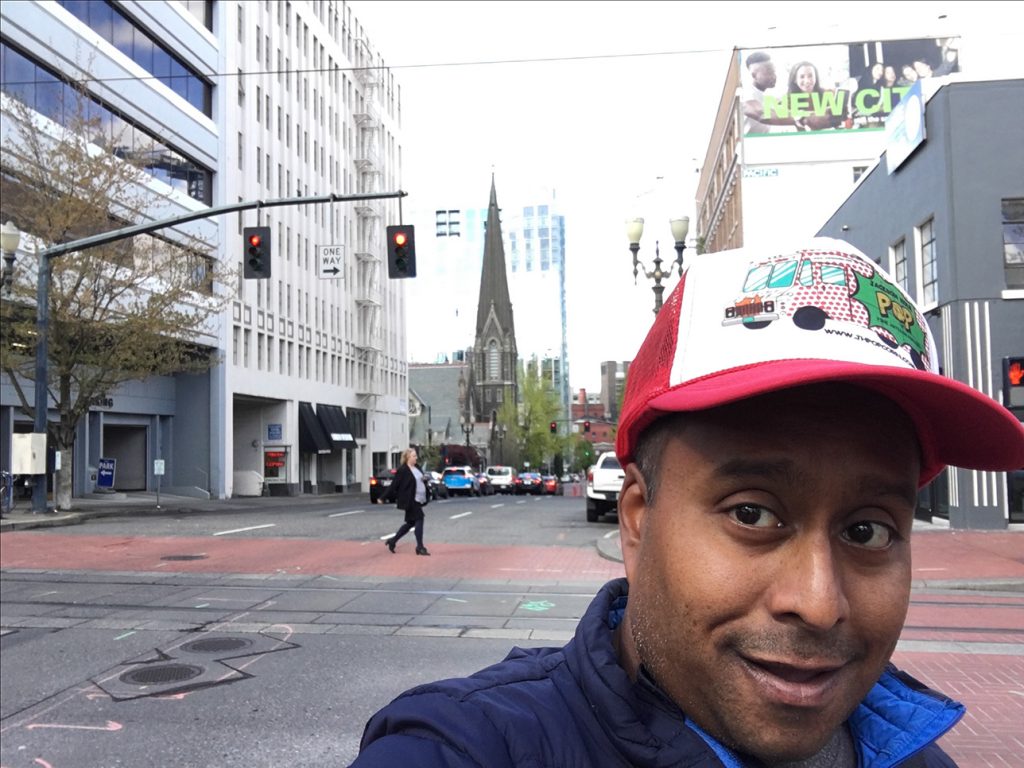 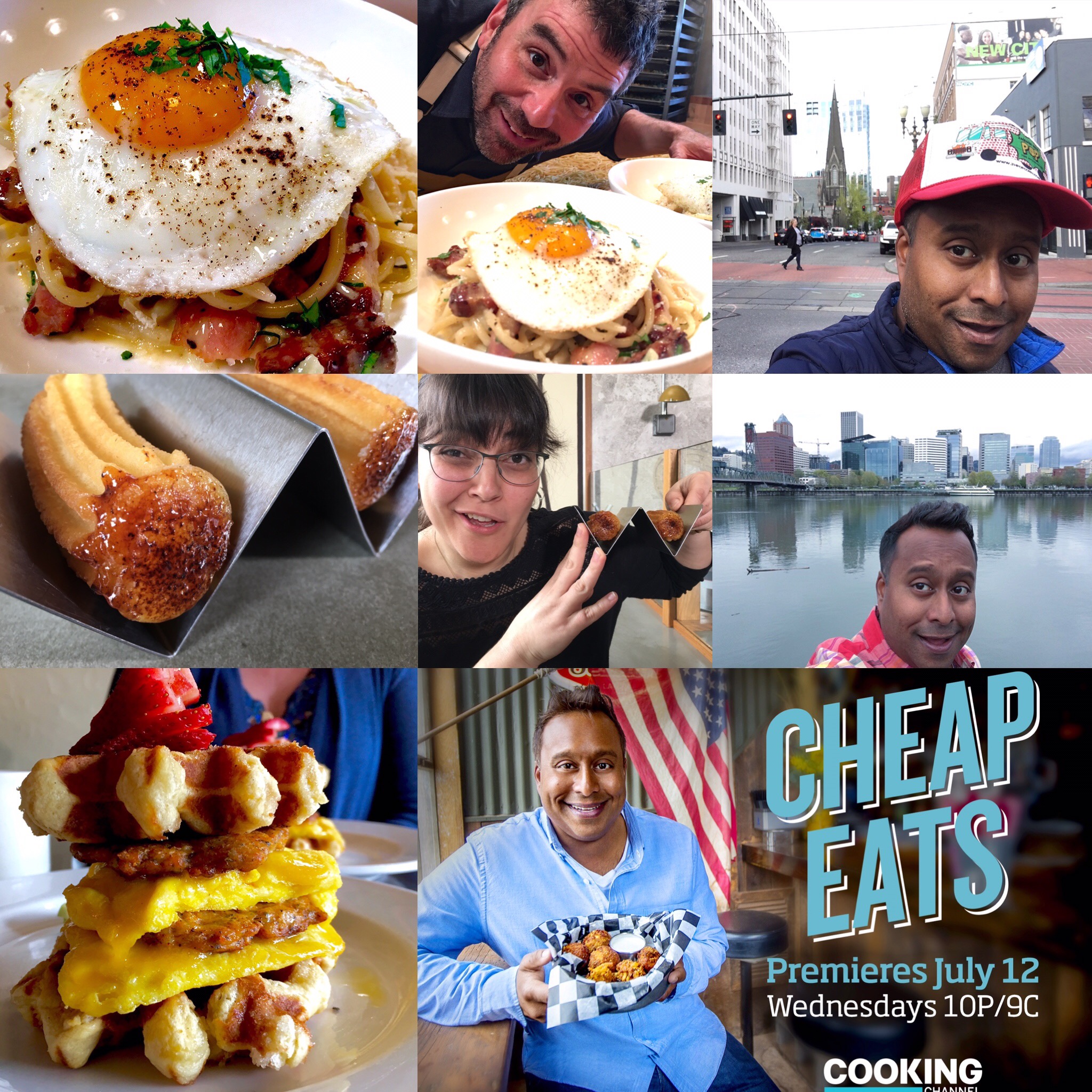 Portlandia. PDX. Or just plain Portland, Oregon. Whatever you call it, we all know this city has a rep for food, style and weather. This was not my first visit to the PDX. In 2014 I was sent all along with an army of food vloggers) armed with the now defunct Tastemade app to shoot and eat the heck out of this venerable food town. I discovered loads of young chefs taking fried chicken seriously, farm to table tacos, plenty of killer hip Asian eateries and of course food carts. In 2017 not a lot had changed. The food carts were very much a part of Portland’s food culture and the chefs I met were as energized as they were in 2014 and their dining rooms packed with happy customers with insatiable appetites. If you don’t know, it takes three days to shoot an episode of Cheap Eats and frankly that just ain’t even close to enough time to check out the bounty that exists here. Still we found some damn fine grub so let’s just sink some teeth right into it! 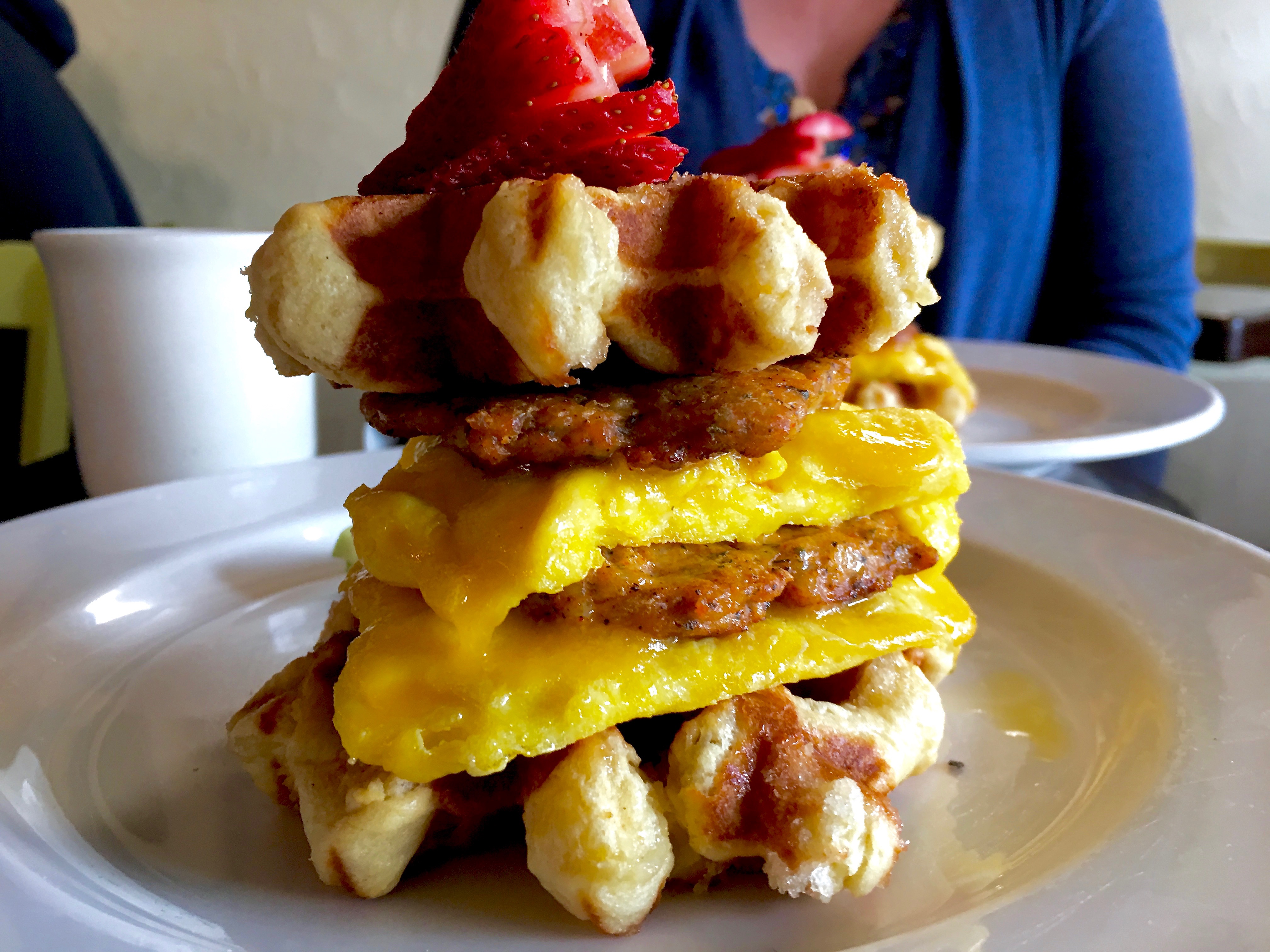 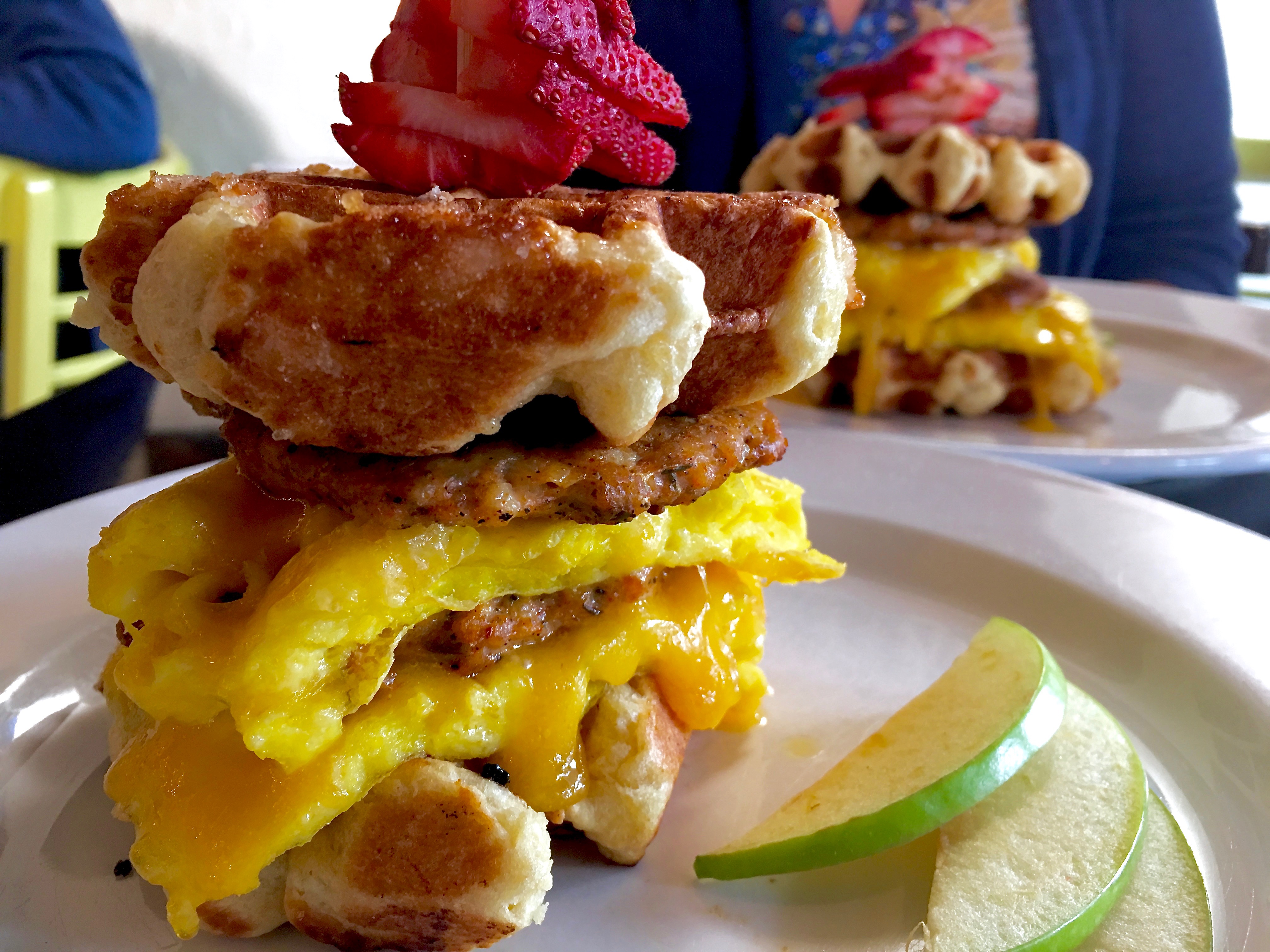 Gigi’s Cafe started out as, surprise surprise, a food cart specializing in – wait for it . . . waffles! Of course this place was destined to go brick and mortar. Owner Charlene Wesler is indeed certifiably waffle obsessed. After watching a food show which showcased a Liege Waffle, a particular style of Belgian waffle, Charlene had to start making them, professionally. So here is a little waffle 101 for ya: Belgian waffles are actually Brussles waffles. See in Belgium there are many types of waffles and the shape of the iron is just one piece of the puzzle. Dough counts, and how about a little pearl sugar in the mix? If you watch Cheap Eats religiously(and if you don’t maybe you should) you might remember a Pearl Sugar Sourdough Waffle from our Indianapolis episode, at a place called Milktooth. Well the Pearl returns once again, now in Portland, only this time the dough is brioche versus sourdough, but the results were equally divine. Backing up the authentic Belgian waffle effort is a house made chicken breakfast sausage patty plus some scrambled eggs and cheddar for good measure. This baby took man sized hands to hold, but I will say that the sandwich held together, despite being a Dagwood in nature. All in all $9 will score you a handheld full plate of breakfast, you could eat in the car. Just don’t try and drive with this bad boy in your hand. You might cause an accident. Or worse, drop the sandwich while changing lanes. 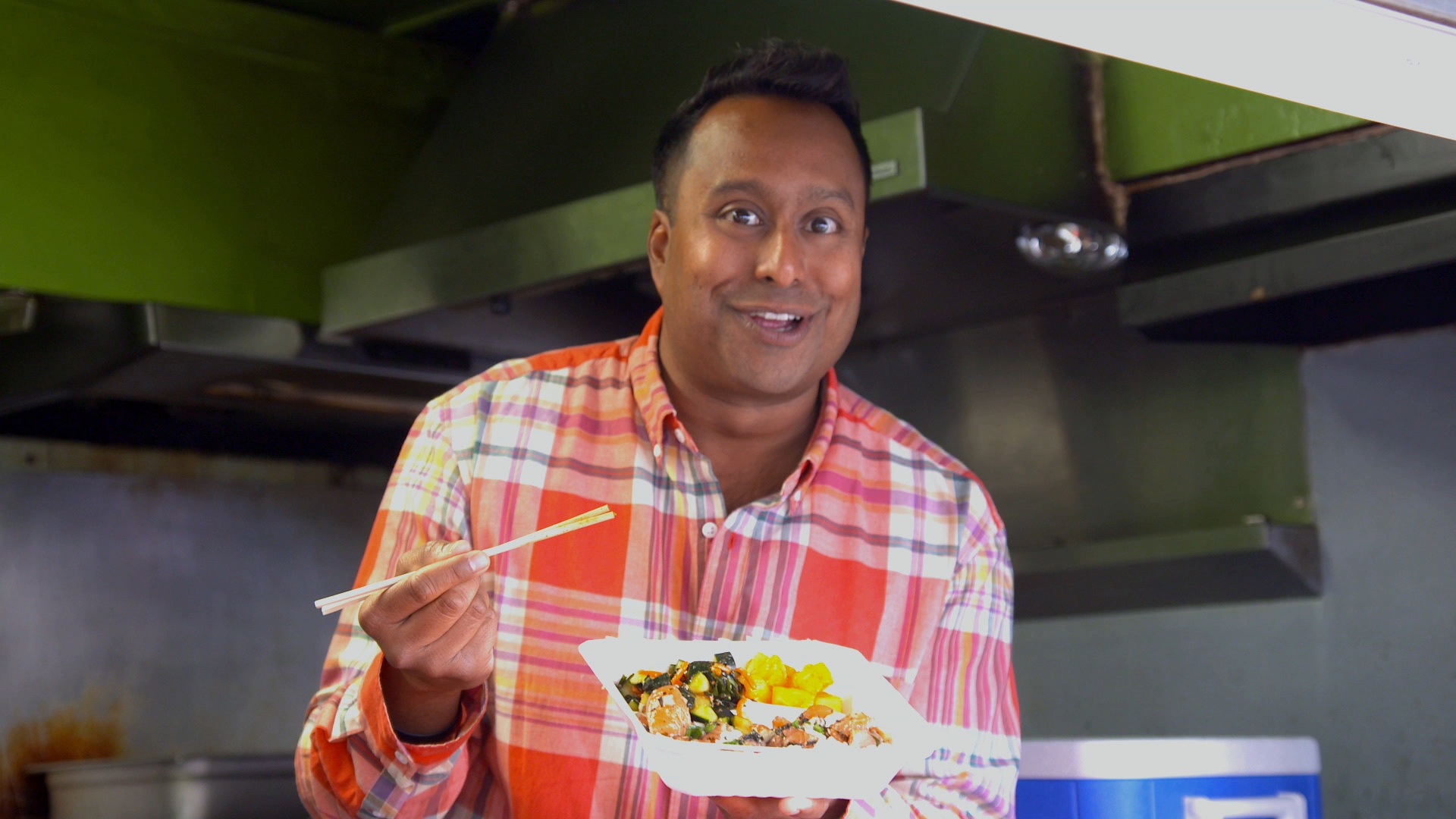 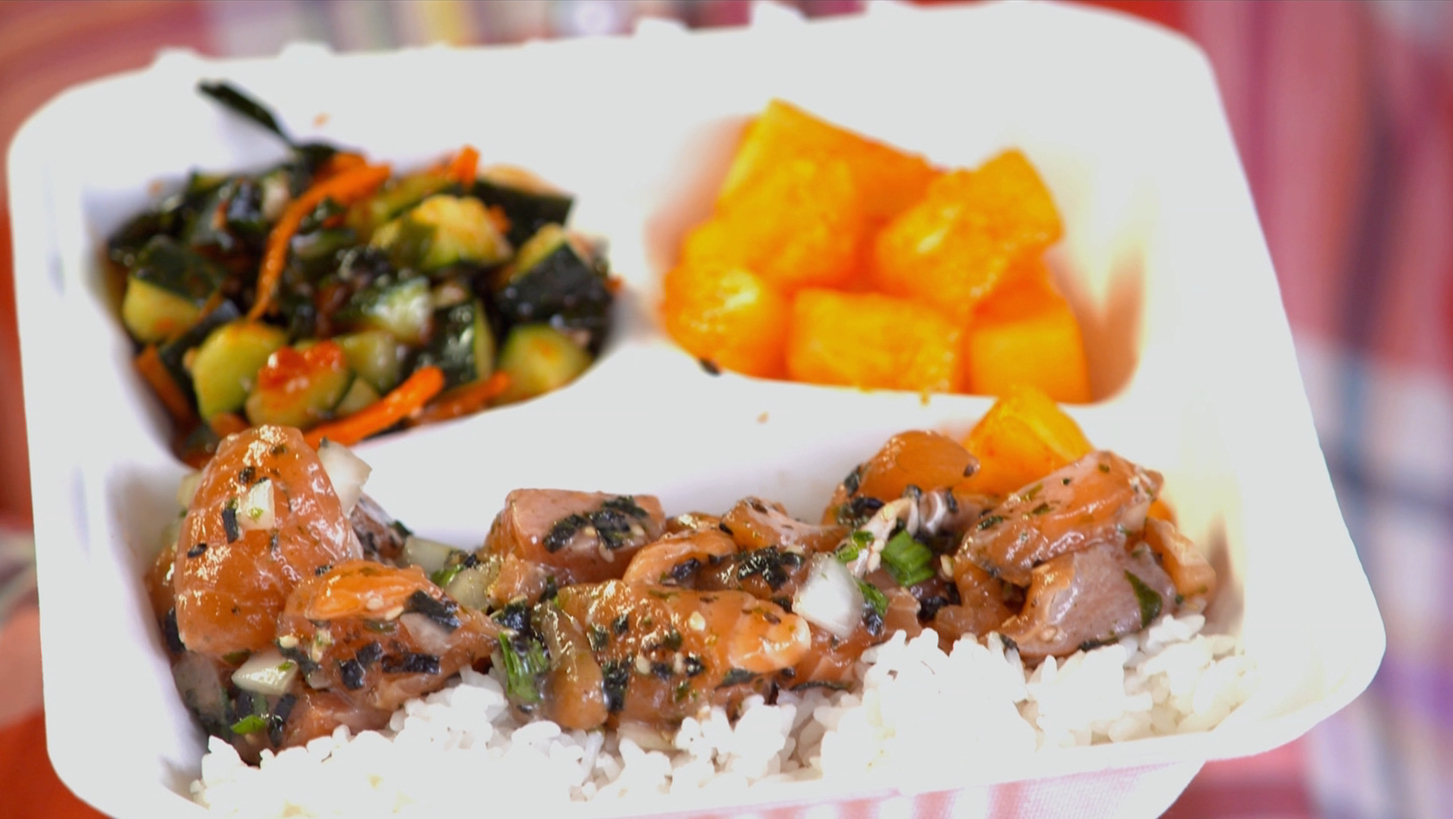 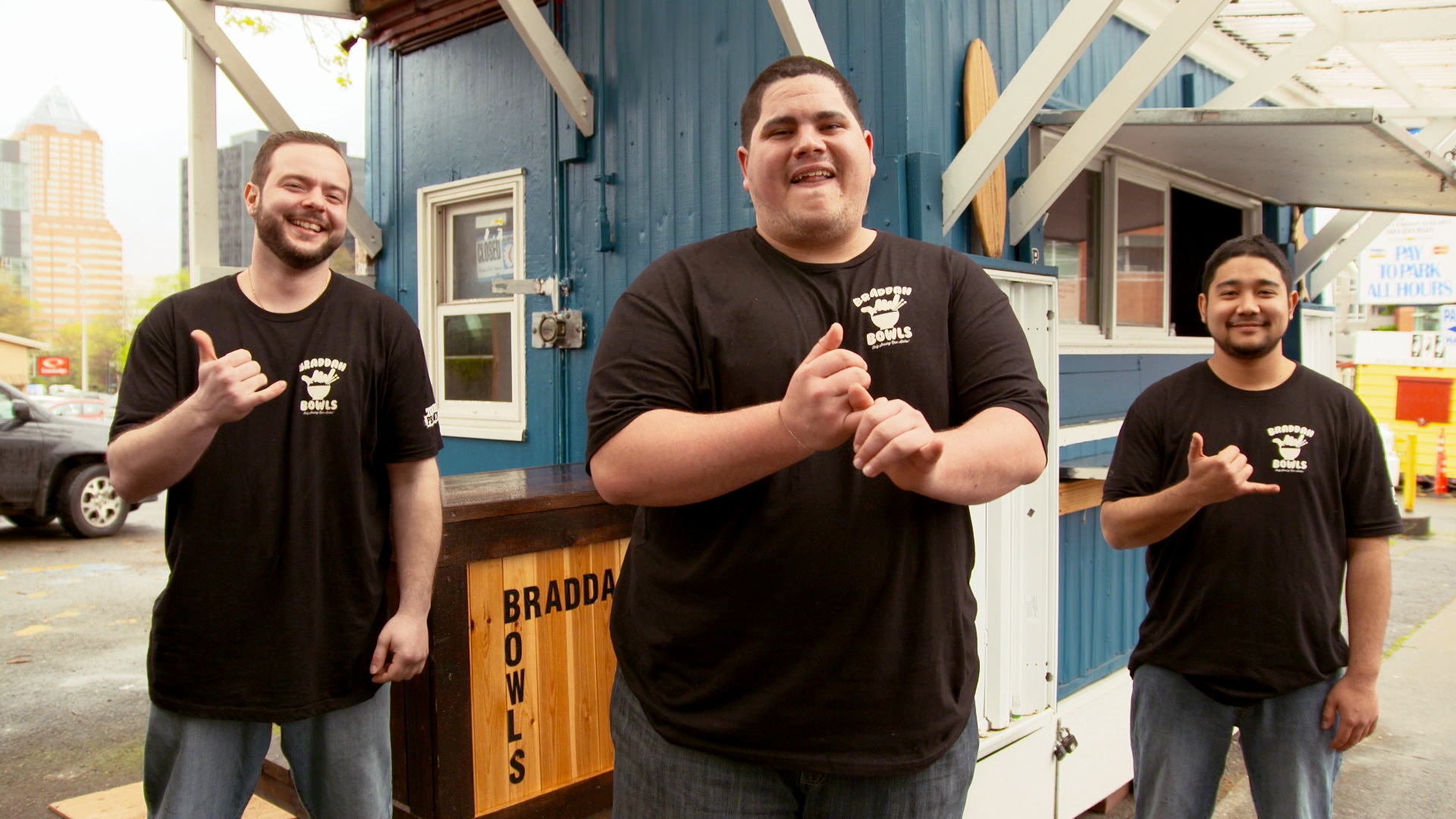 The Vitals:
the spot: Braddah Bowls 420 SW College st. Portland OR 97201
the eats: Furikake Salmon Poke
the bucks: $9
the full nelson: the poke craze is something worth being crazy for

My braddahs from another maddah. Me and the braddahs clicked pretty quick and it all started with my FaceTime with Zach Atagi where I got to hear about his journey into starting his own PDX food cart. The nature of a food cart screams fun for chefs and foodies alike but Zach’s journey was a little different. Hailing from Hawaii(the land of poke so you know his is legit), Zach lost his dad when he was only 18, derailing his dream of going to college and playing football. Instead of leaving for the mainland to attend college like his classmates, he had to start working, stepping into his dad’s shoes as “man of the house”. Speaking of men, in Samoan culture, the men cook. And I’m down with that. So Zach took a food related job: working at the local fish market. It was here that he learned not only the art of butchering fish but also food pairing and food safety handling. Throw in some family poke recipes and starting Braddah Bowls was simply a matter of time. Like sushi, a good poke joint relies on turn over and believe me there are lines for Braddah Bowl, but Portlandia being a food obsessed town that it is, people deal with lines – they certainly do down here in Austin. Frankly, $9 for this much quality poke with two sides was a steal. If I was a Portlander, this would no doubt be a regular stop of mine. And then there are of course my braddahs from another maddah. Three young fun loving guys who are slinging a hot food trend that is also personal; it is a food that is deeply connected to their culture. In the brief time I spoke with Zach I could tell his Dad must have been a presence to behold. A young man still, Zach was taught well in the ways of Samoan culture and being an all around responsible person. Yeah, I think there is a proud Samoan papi way up there looking down on Zach. And he is proud. I know I would be. 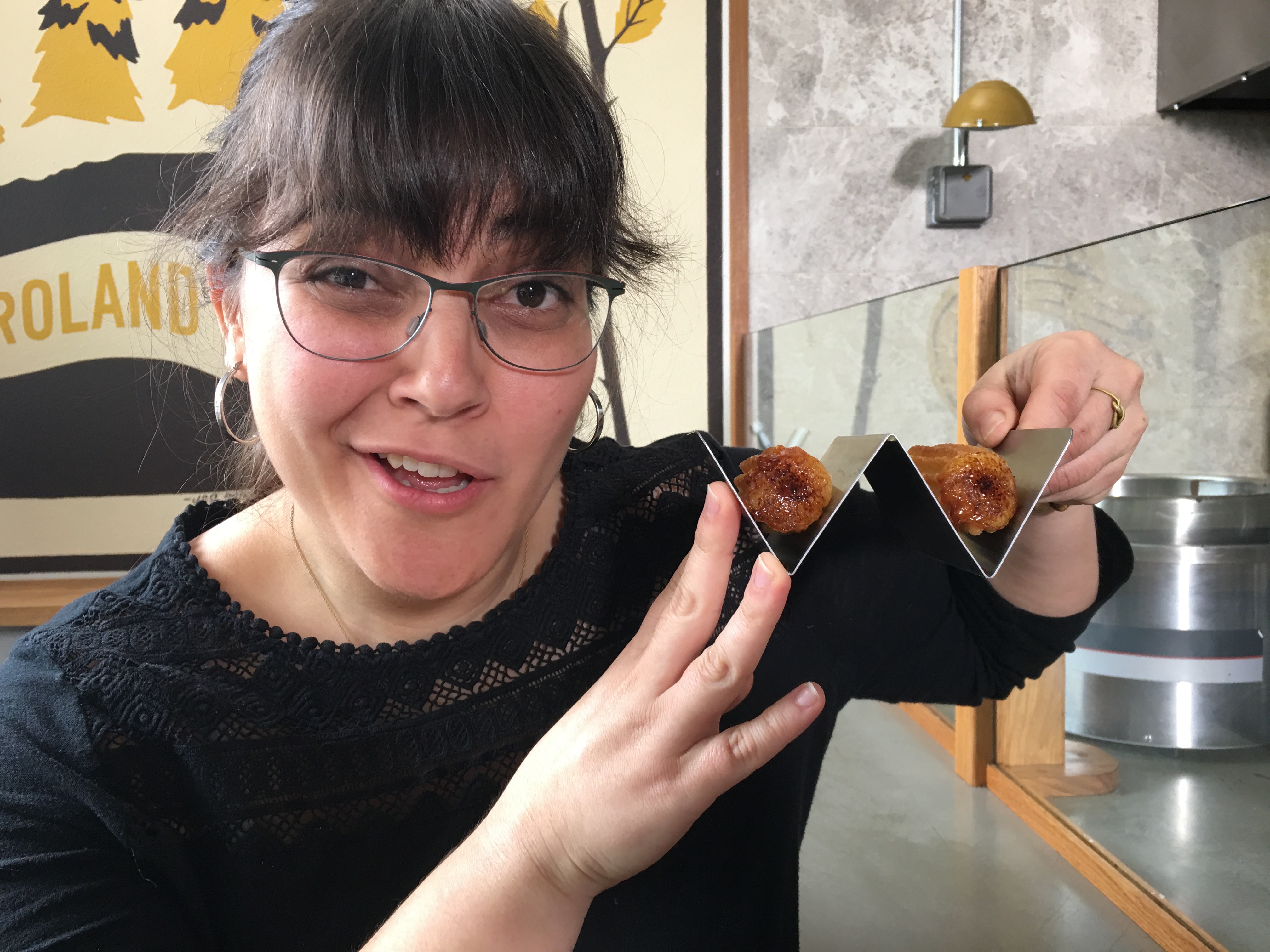 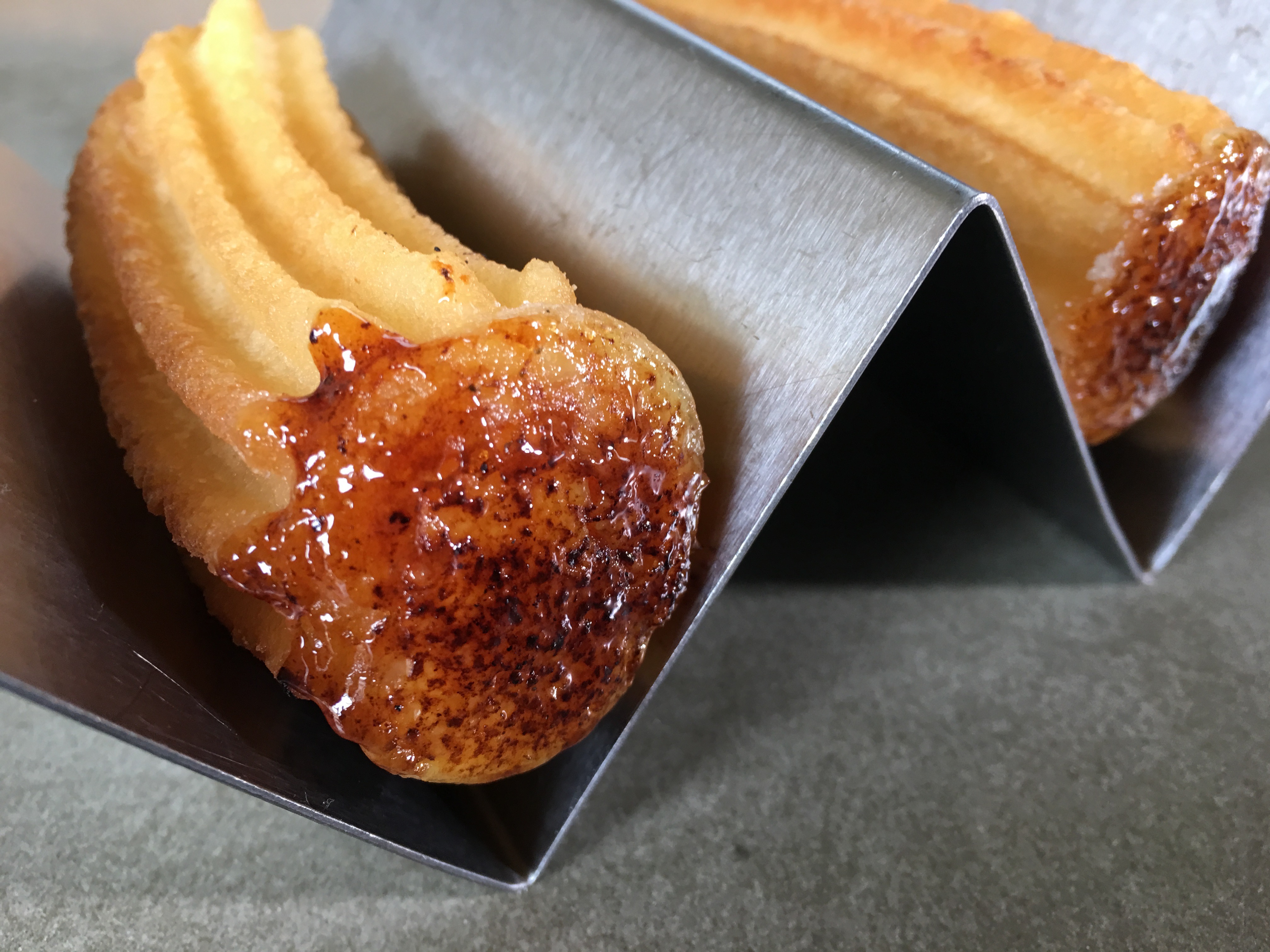 Chef Cristina Baez is a culinary force in Portland. Not only has she brought authentic Spanish Xurros to PDX but she also brought legit paella and tapas with her other restaurants Chesa and Ataula. I’ve said it before and I’ll say it again, Spanish food is woefully underrepresented in the US compared to their fellow European counterparts. I went to Ataula on my first night in Porltand(more on that below) and they are doing serious food there. But we are talking snack time for Cheap Eats which isn’t exactly serious. And really nothing about a good churro or xurro should be serious. But authentic? Plenty of room for that at snack time on Cheap Eats. So here’s the dilly on Xurros. In Spain they are a breakfast thang as critical to the AM routine as espresso(Spaniards prefer espresso to coffee). What’s critical to Xurro 180 is that they are fried to order and let me tell you the gizmo Chef Cristina imported from Spain to cook these babies up might be more powerful than the computer I had in college. But don’t you go thinking your hard earned $3 is going to a fancy machine that does it all; Xurro 180 has a squad of chefs with pastry backgrounds backing up Cristina and this HAL 9000 of a frier. I guess I didn’t have to reference Stanley Kurbick to upsell these Xurros. At $3 an order for made to order delicious fried dough that can be stuffed with cream, topped with premium melted chocolate or dusted with cinnamon and sugar, this snack sells itself. 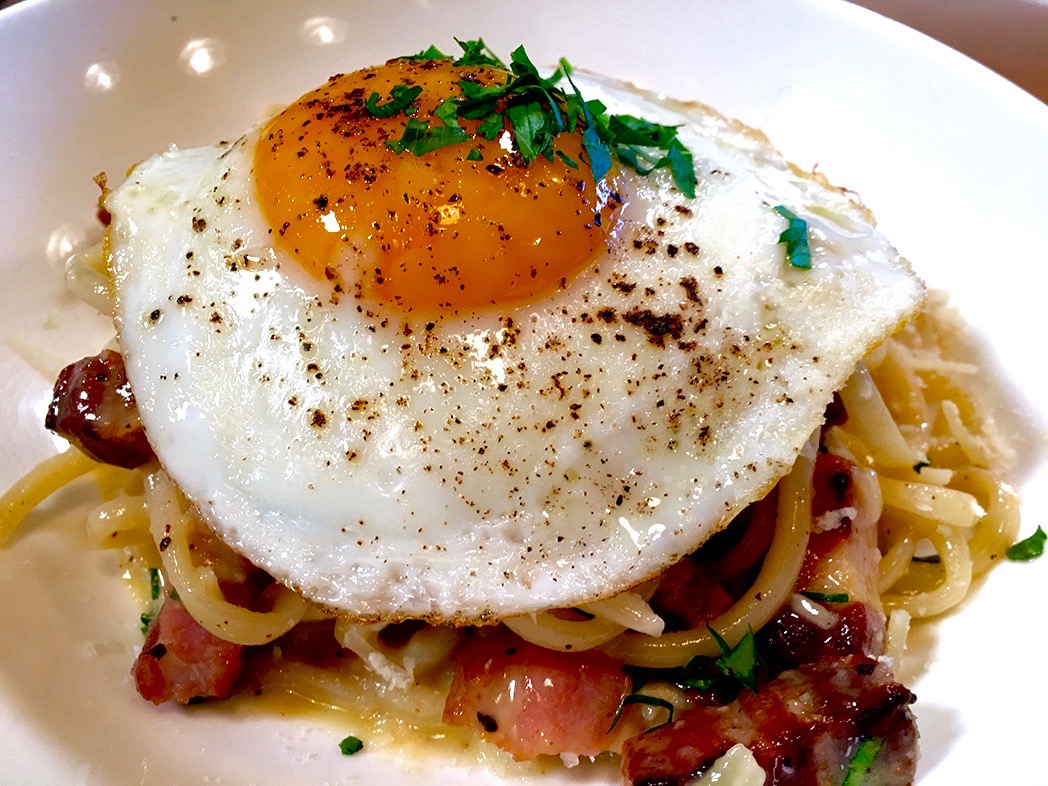 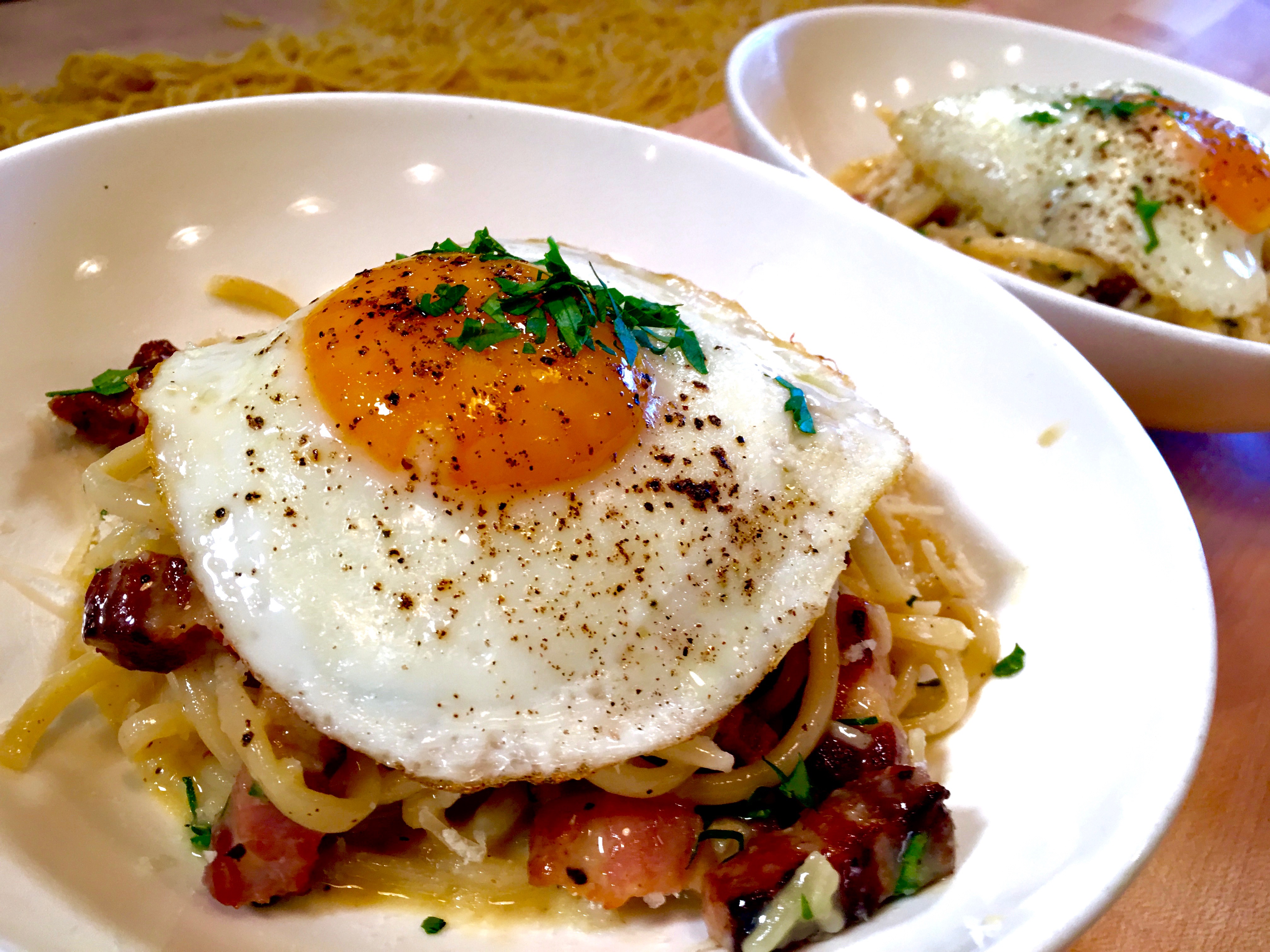 The Vitals:
the spot: Grassa 1506 NW 23rd ave Portland OR 97210
the eats: Pasta Carbonara
the bucks: $11
the full nelson: pasta good enough to be served in NYC or Philly for $5 more and half the portion

The Pasta Carbonara at Grassa is good enough to fetch $15 a plate at a solid NYC or Philly restaurant, and would weigh in at half the portion size. Not that there is some conspiracy that Italian restaurants in either of those magnificent food havens are hard at work trying to pry your hard earned dollars from you. It’s just that pasta of this quality tends to be found at straight up Italian Italian restaurants, where pasta is served primi or first course, meant to followed by the secondi, or entrée. It is a wonderful and authentic way to eat Italian food but also requires a greater investment not just in dollars but in time. Grassa is a joint I can take my 5 year old too. He can score his spaghetti while daddy can get serious with something like the Carbonara or the Rigatoni with Sunday Gravy(or Ragu if you’re not a Sopranos/Goodfellas fan). In case you didn’t catch it while the episode aired or, like me, you didn’t grow up eating this Roman delicacy, let me break down what Pasta Carbonara entails. First you start with the pasta, which is usually spaghetti(Grassa uses Bucatini which is basically a thicker spaghetti) that is tossed with cooked pancetta, raw egg and a hard cheese like pecorino. No red sauce here folks, this is hard core rich and rich food is kinda my favorite food. But the price tag is far from it. Spaghetti might have a reputation for being a cheap eat, but this Cheap Eat was a gourmet find. Real deal Pasta Carbonara at Cheap Eats prices. Yeah, Portland, I like how you roll. 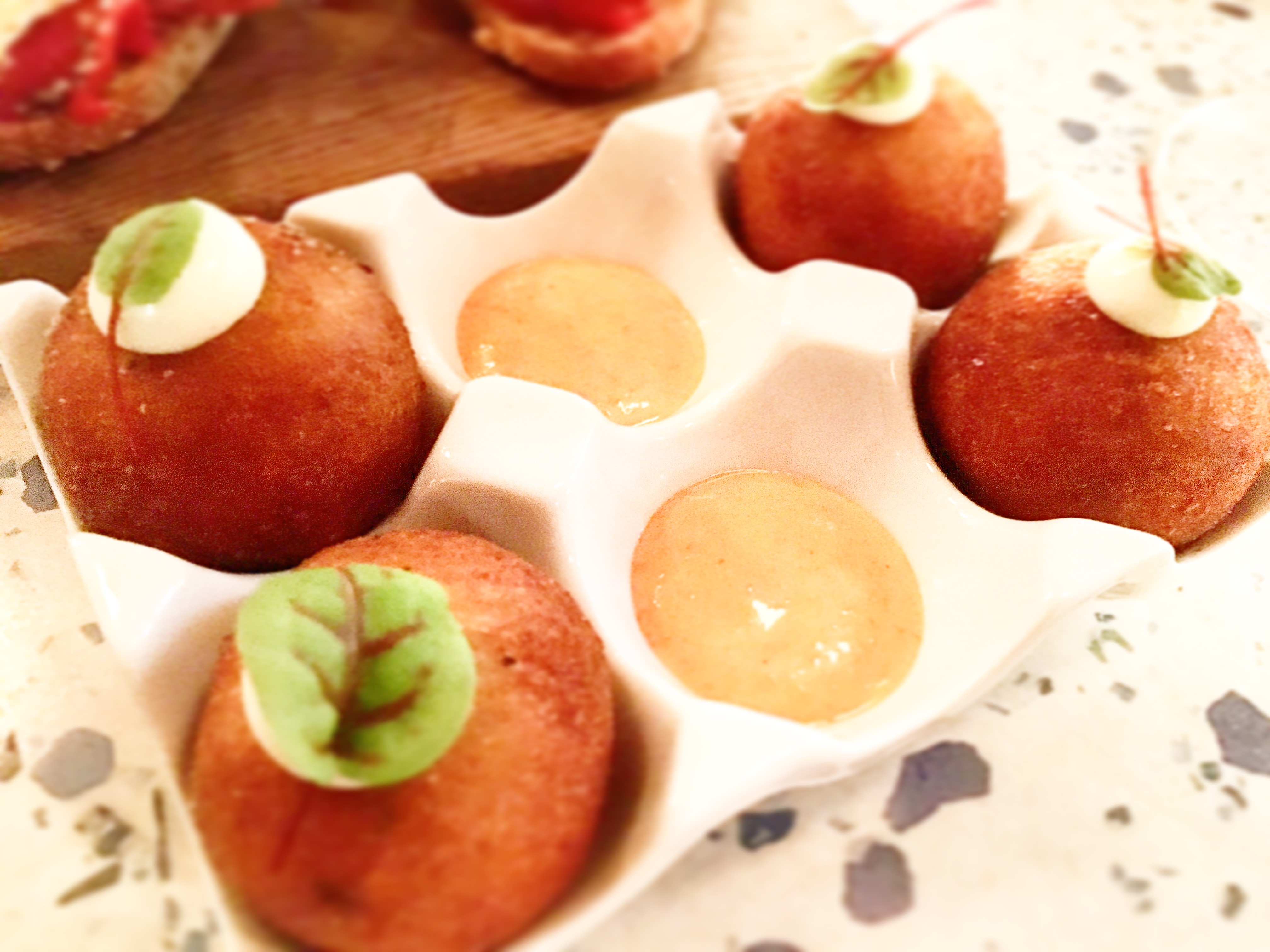 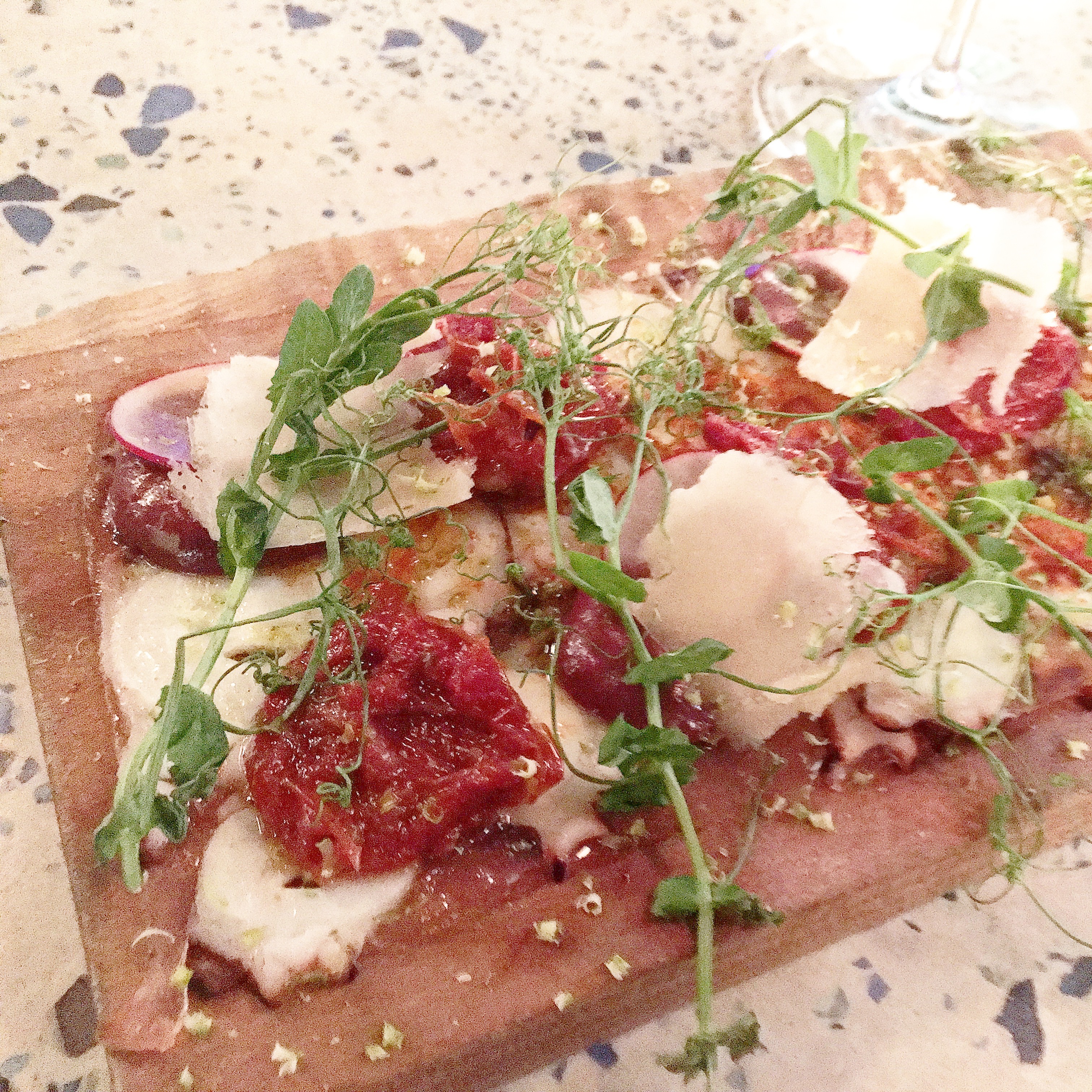 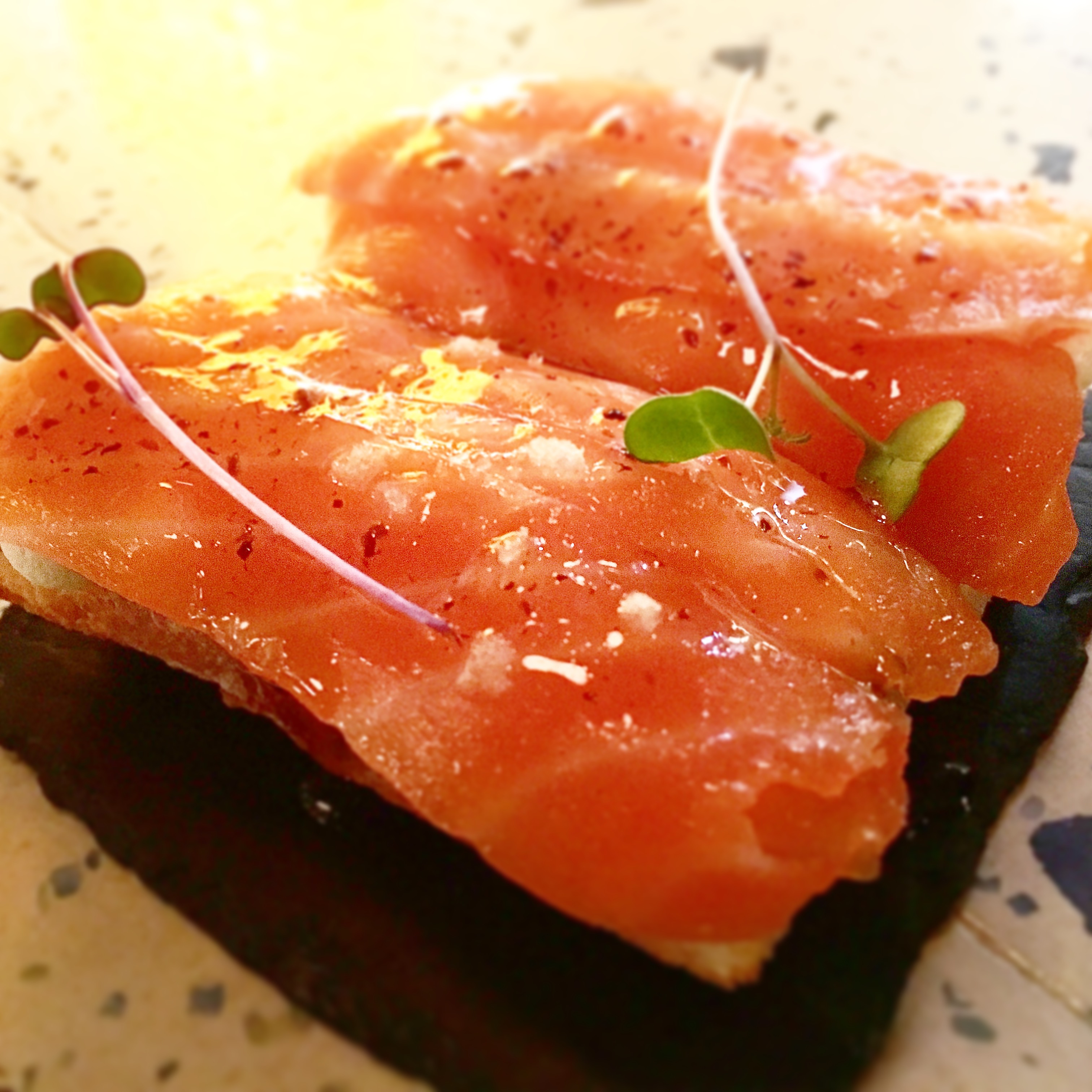 The Vitals:
the spot: Ataula 1818 NW 23rd pl Portland OR 97210
the eats: croquettas(salt cod fritters), pulpo carpaccio(octopus carpaccio), Ataula montadito(smoked salmon on coca bread)
the bucks: $9, $14, $9 respectively
the full nelson: Until you get to Barcelona, get your Spanish tapas fix sorted at Ataula

Did I mention that Chef Cristina Baez was a culinary force in Portland? Well she isn’t alone. Her husband, Jose Chesa is a force as well. Hailing from Spain, it should be nor surprise that Ataula’s menu has plenty of Iberico this and salt cod that. Speaking of salt cod, those croquettes alone are reason to go here. The trouble is then you get curious. You start to ask questions like “how is the octopus carpaccio?” What are your favorites?” “Maybe I will have a second glass of Rioja” Look, you only live once but I gotta tell you that Ataula ain’t exactly Cheap Eats. Plan on spending a $80 a person here if you like to drink. But I will tell you that the food here was good enough for me to buckle down on that dream vacation to Spain. If the memories are half as good as that octopus was, it will be worth the airfare alone. 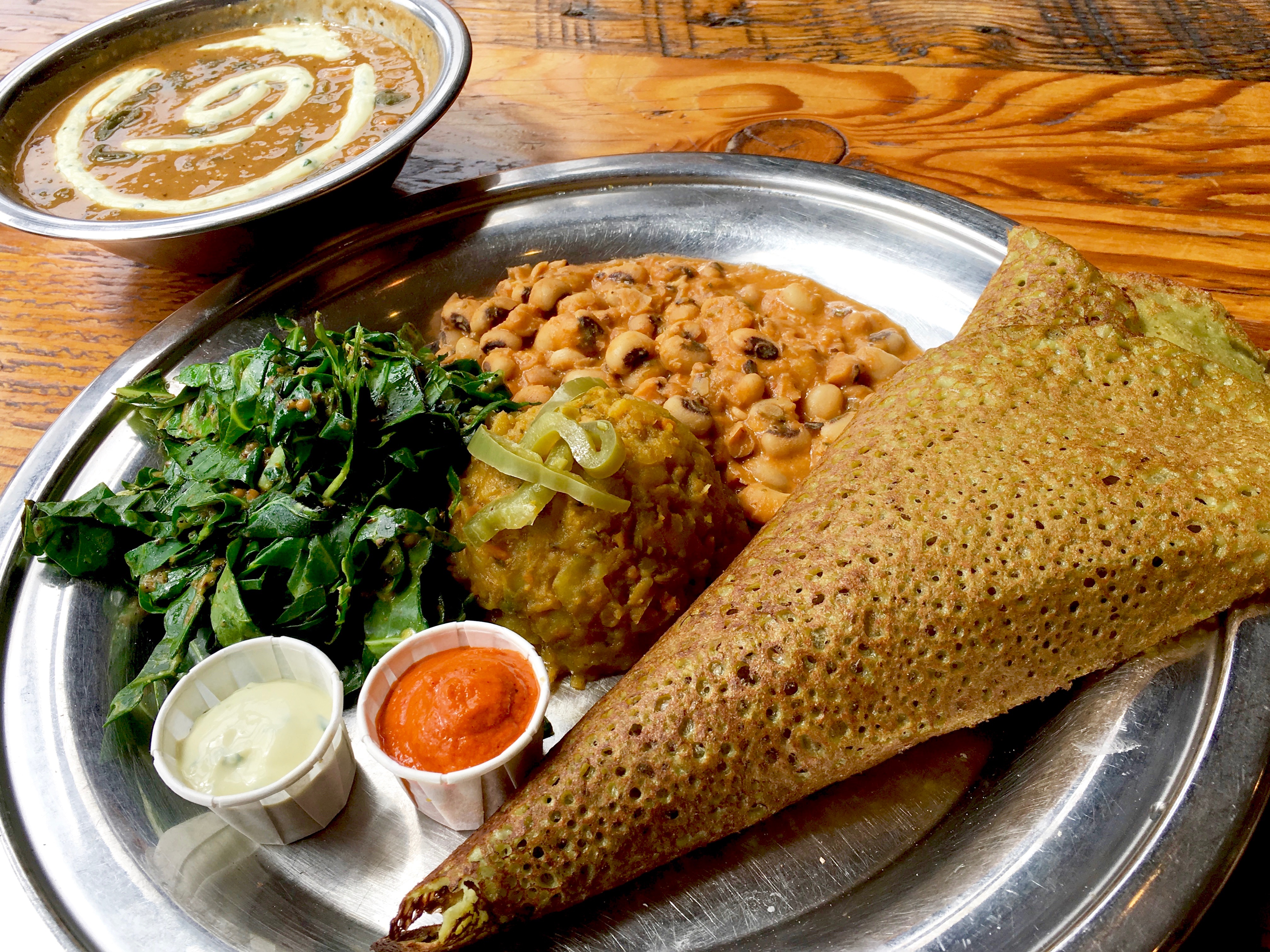 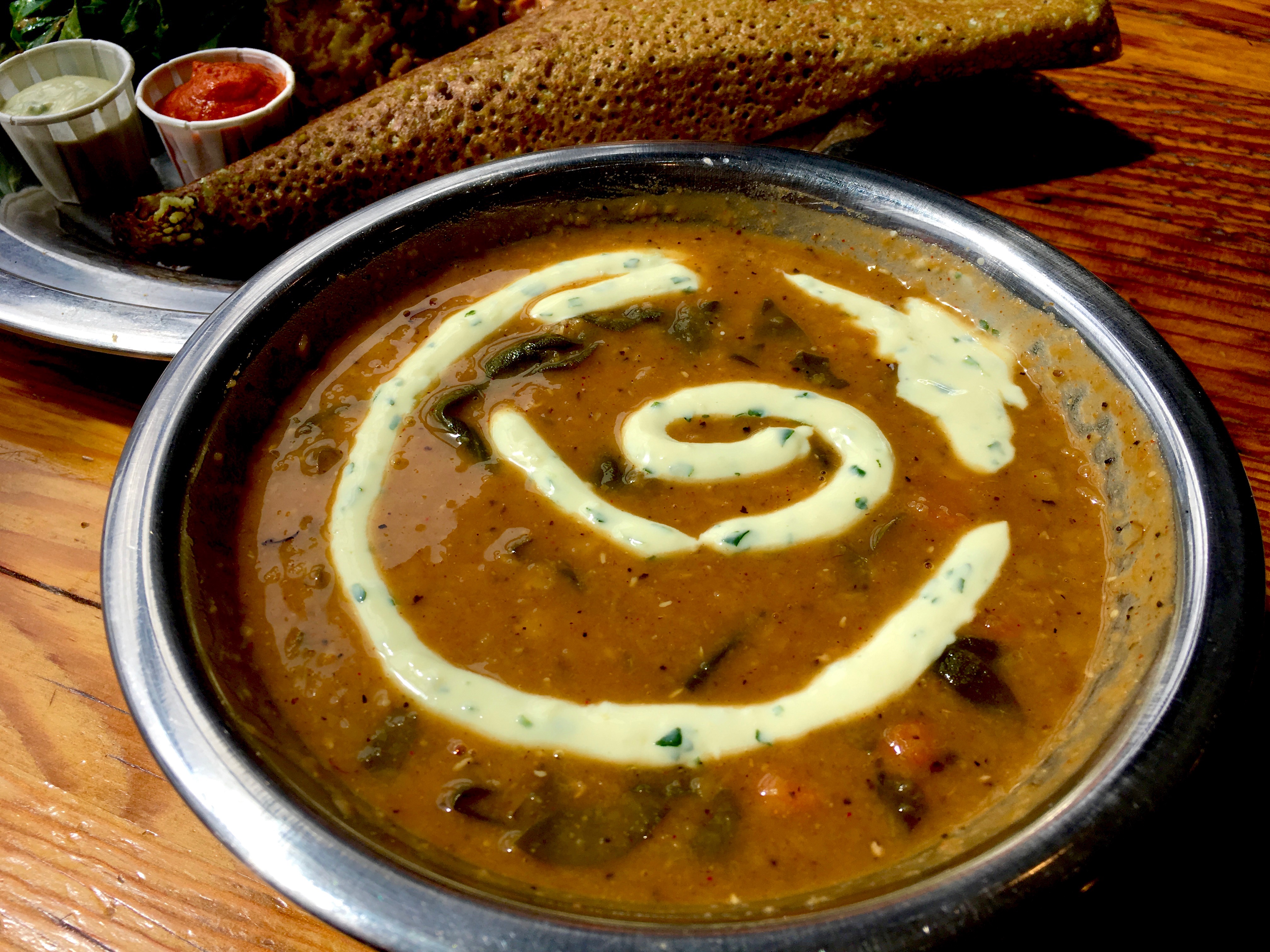 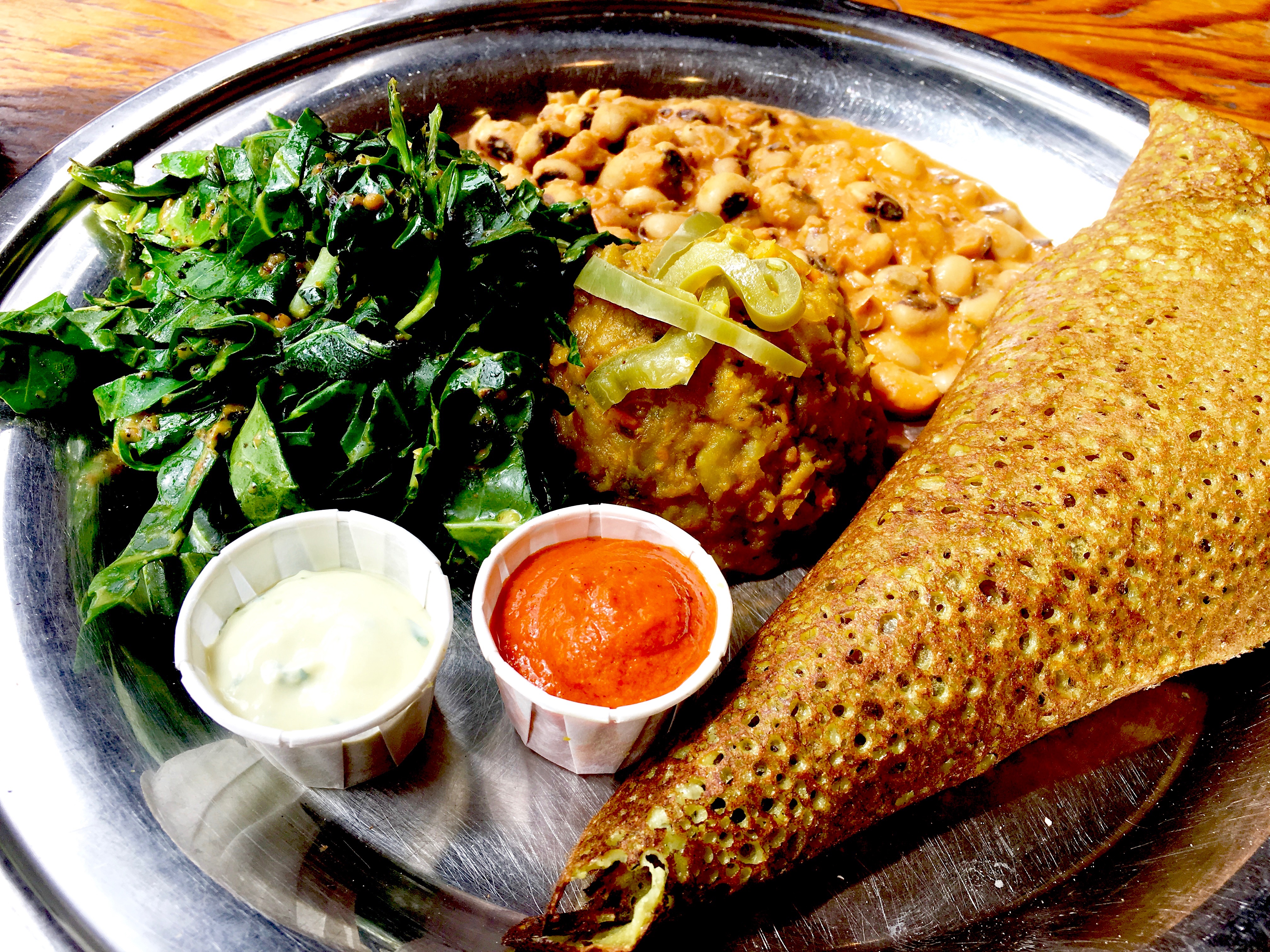 Even though you can quote me like two paragraphs ago as someone who “loves rich foods” I also love savory foods and vegan Indian food is very much that. It is amazing how much a good bean, pea or lentil curry can sway a meat eater who loves the smell of garam masala in the morning. Ok, maybe that was extreme but I do like spiced aromatic foods – blame it on my DNA. Even if you aren’t a vegan, if you enjoy Indian food then you will enjoy The Sudra. I know I did as this was my second visit here. I first visited Sudra in 2014 and frankly I was skeptical till I had my first taste of the red lentil stew and a hoppy IPA. A perfect blend of the Pacific Northwest and the Indian Sub Continent. And the best part of about going to a Veg/Vegan Indian restaurant is that odds are you will encounter a dosa. For the uninitiated, dosa is a type of pancake made from rice flour that scoops up curries as efficiently as injera does to Ethiopian stews. It is a staple in South Indian cuisine which tend to be veg heavy which tends to be a cuisine I avoid far too much. I might not be a Dosa connoisseur as I rarely have them, but suffice to say I drilled the dosa along with the black eyed pea Korma and the collard greens. If there was a ‘Portland/chef driven” touch to the meal I would say it was the collard greens. Typically I find greens to be cooked to death in Indian recipes. At Sudra the collards were cooked gently, possessing a great deal more texture to collards in their raw state yet were still quite tender. I love me my lamb curry and goat biriyani but I can honestly say that I lived by the Sudra, I would be eating Vegan at least once a month.

Yes my friends, that was Portland Oregon and frankly I just scratched the surface. If I wasn’t so accustomed to plenty of sunshine after living in Los Angeles for 20 years, I could move there just for the food culture. And I do mean food culture because it is certainly something that is talked about, celebrated and part of the city’s identity.  Portlandia jokes aside, the food movement here is an important one and thankfully it is carrying on with Cheap Eats in mind.