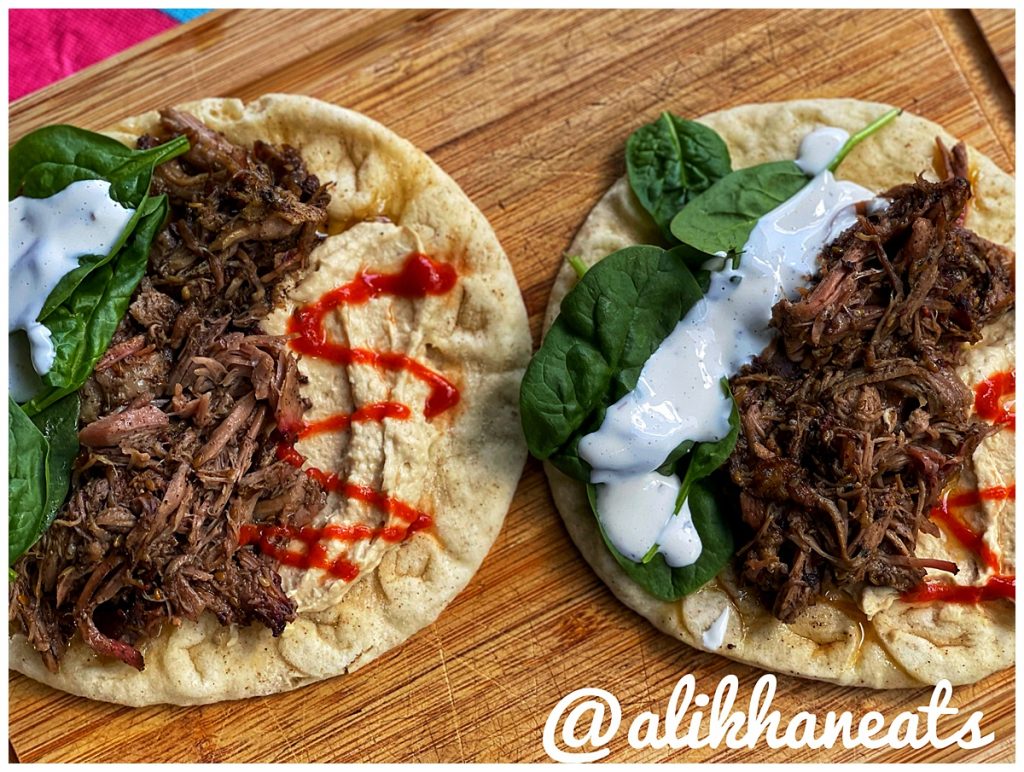 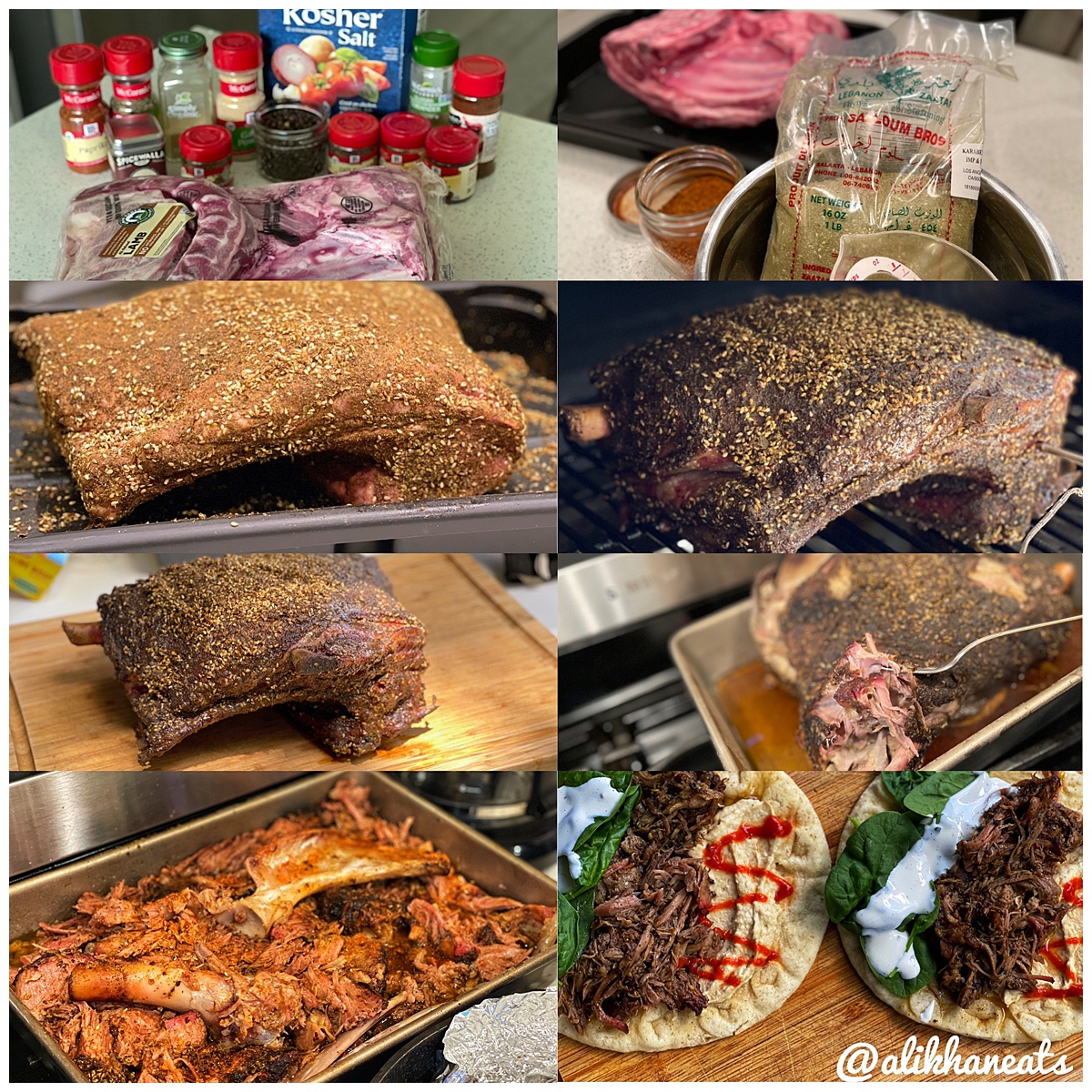 Recently I was treated to some spectacular lamb from my friends at the American Lamb Board. I was also a guest for a cooking demo with Chef Matt Abdoo from Pig Beach BBQ in NYC. Matt is half Lebanese so barbecues growing up meant eating lots of lamb. I also share a fondness for childhood barbecues with lamb and back in the day I was known for cooking whole legs of lamb, bone and all, at barbecues or a really any party where I could sneak into a kitchen.

Unlike yours truly, Chef Abdoo is a serious chef, having worked in some of the fanciest kitchens around like Del Posto in NYC. He also heeded the call to the smoke, opening up Pig Beach BBQ in NYC. In turns out he found his stride in barbecue as Pig Beach has now three locations, including one in Florida. 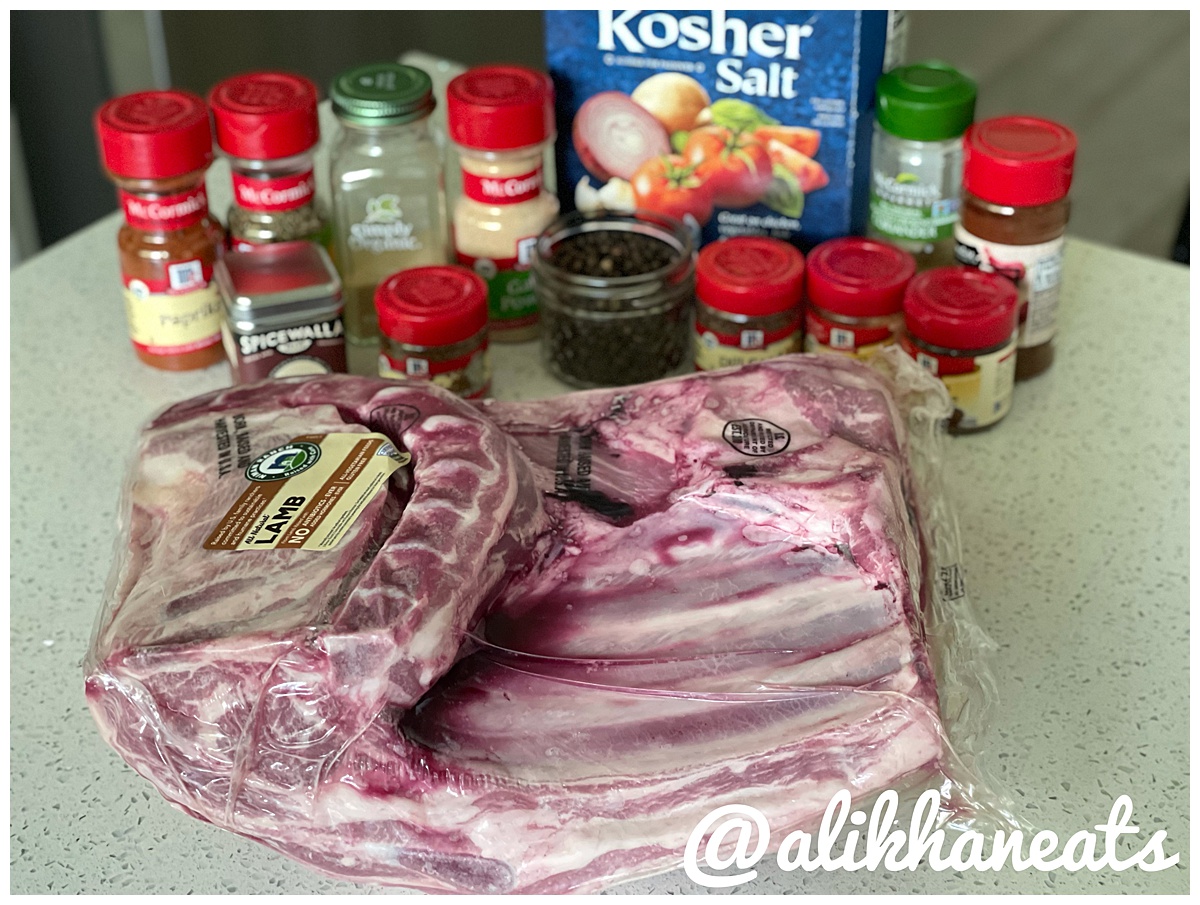 With this level of chef at the helm, I had to make his recipe demo for myself. Chef Abdoo starts the process off by making a special rub for the lamb. If all the above spices are too much for you then buy yourself some Cavender’s seasoning, which is basically what the above spices become. But you know I had to make it right. 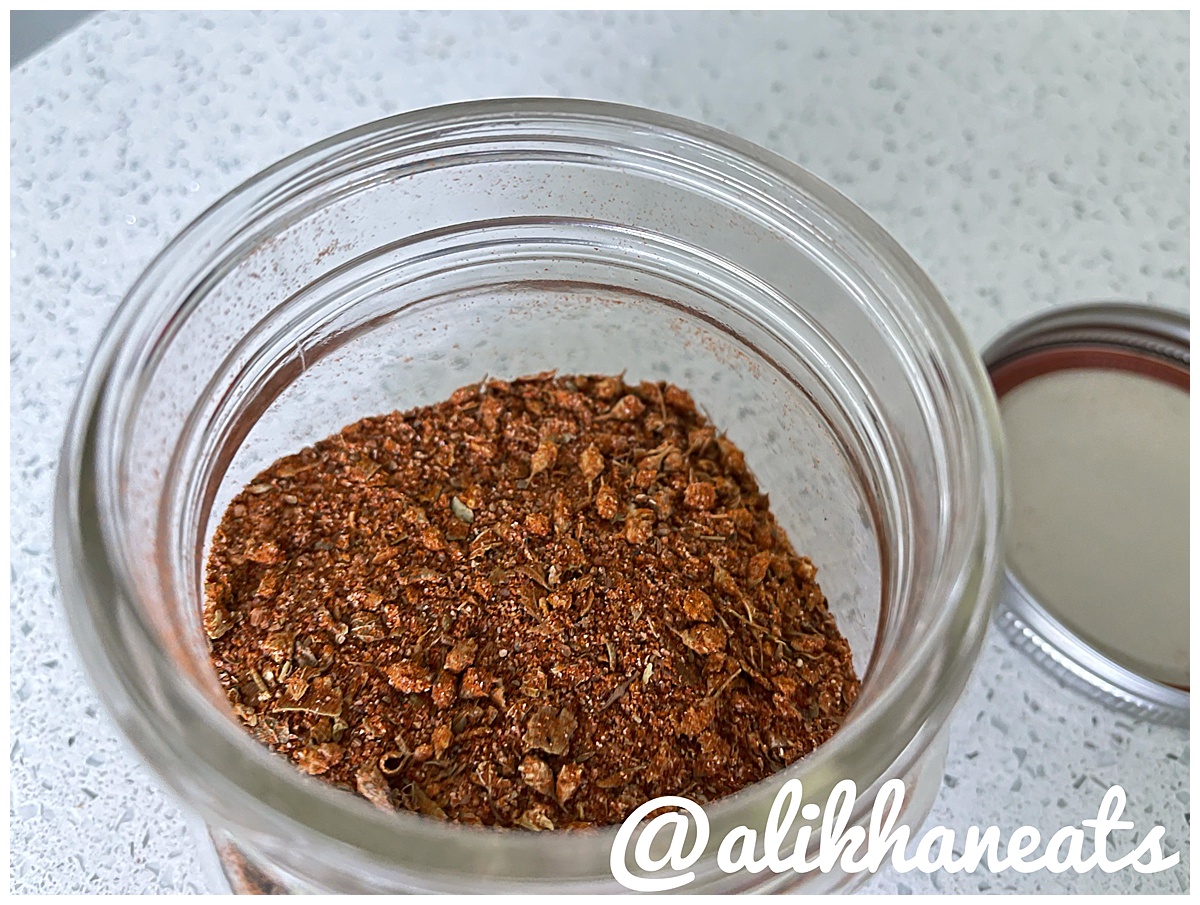 Mix all ingredients well and reserve in jar. I omitted a seasoning, Accent, which I haven’t even thought of since the 1980s. Also I reached for an Italian herb blend in lieu of the thyme, oregano(1/4 tsp), and rosemary. You’ll see coriander on their twice, the first refers to a coarse ground version. I just used what I had. For the 1/4 cup crushed oregano I subbed Mexican Oregano. 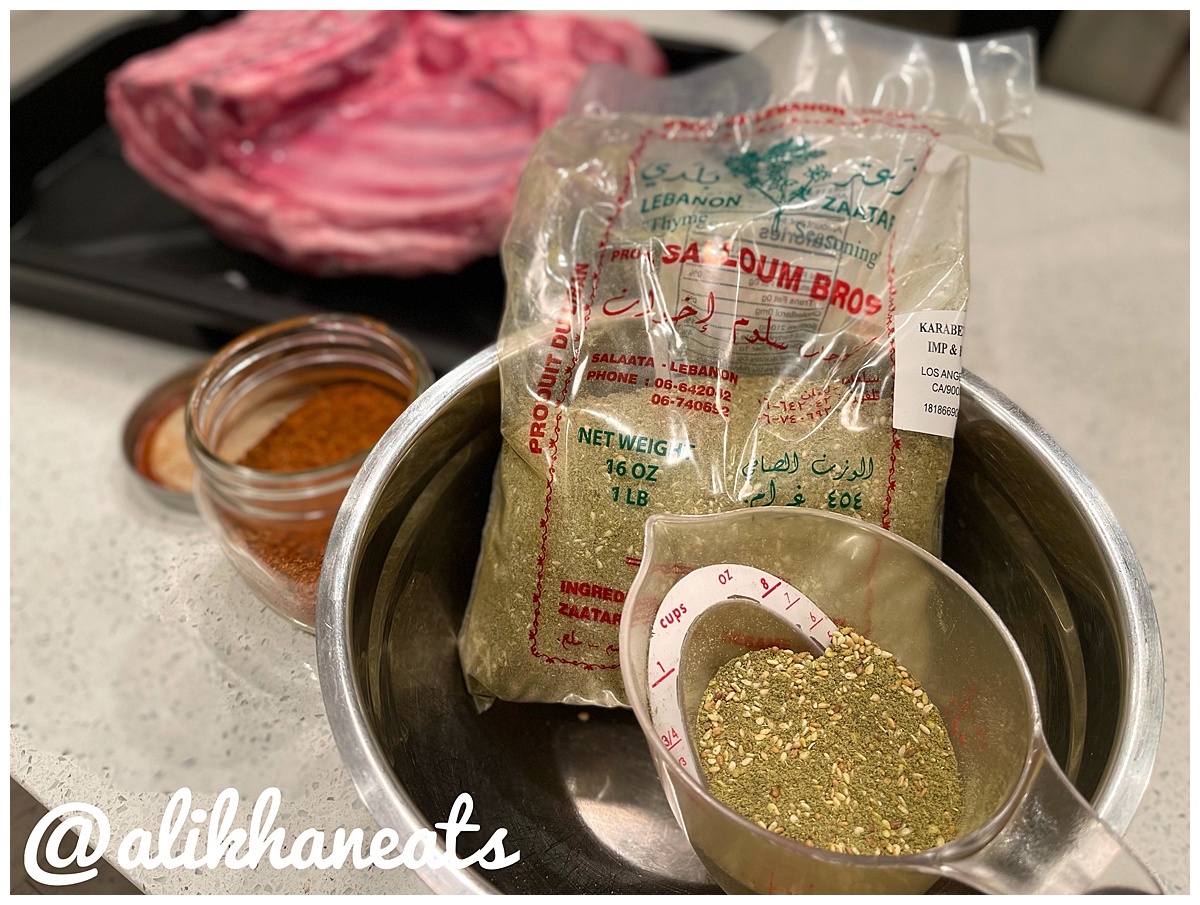 The Greek rub is just the half of it. You’ll also need Za’Atar, a Middle Eastern herb mix which contains Sumac, Sesame seeds, Cumin and a variety of other herbs depending on the particular region. I picked up a Lebanese version from a local Middle Eastern market. It was my first time using the stuff and you know what? I’m hooked. It’s a great addition to hummus and does wonders on chicken. 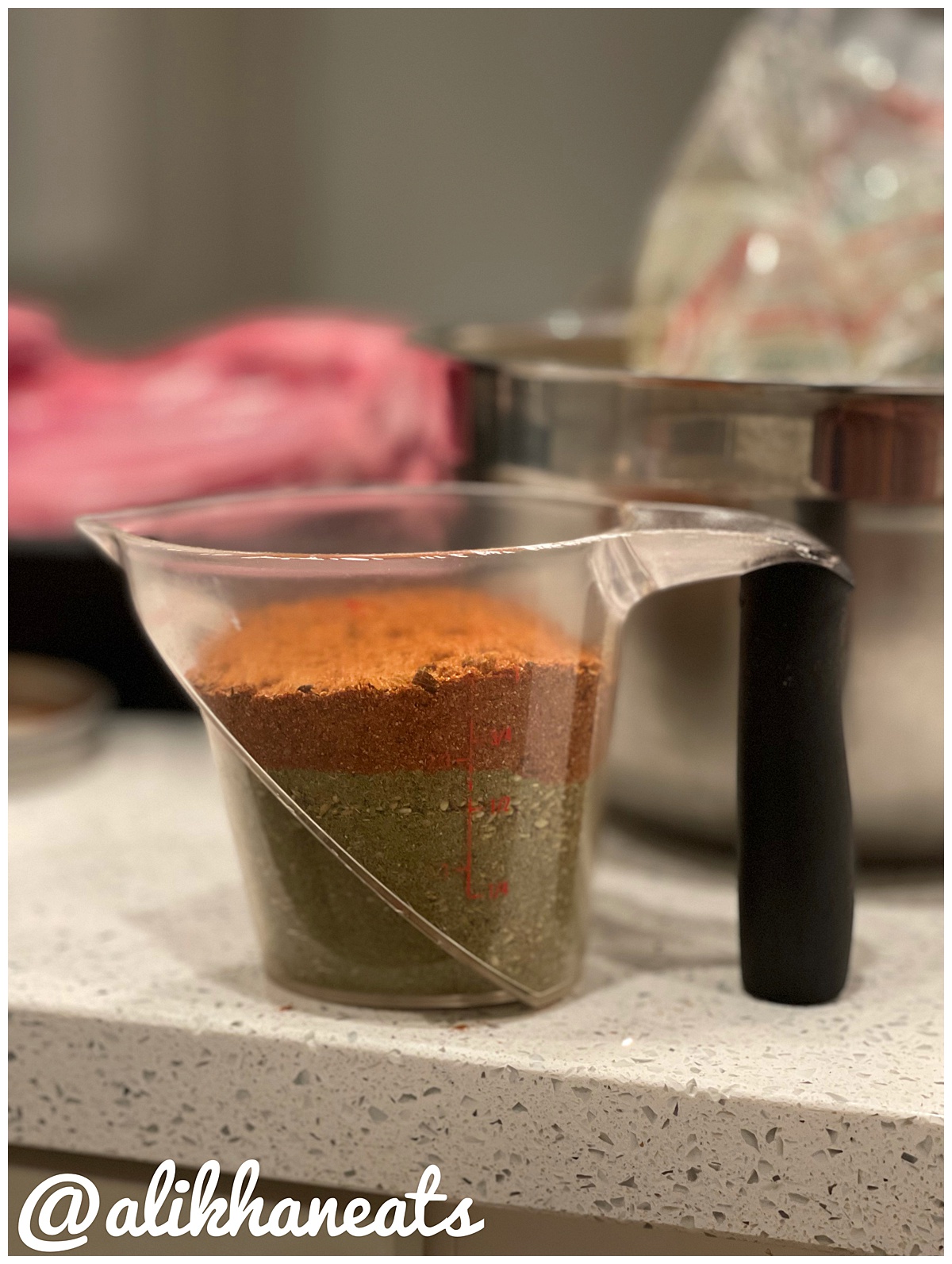 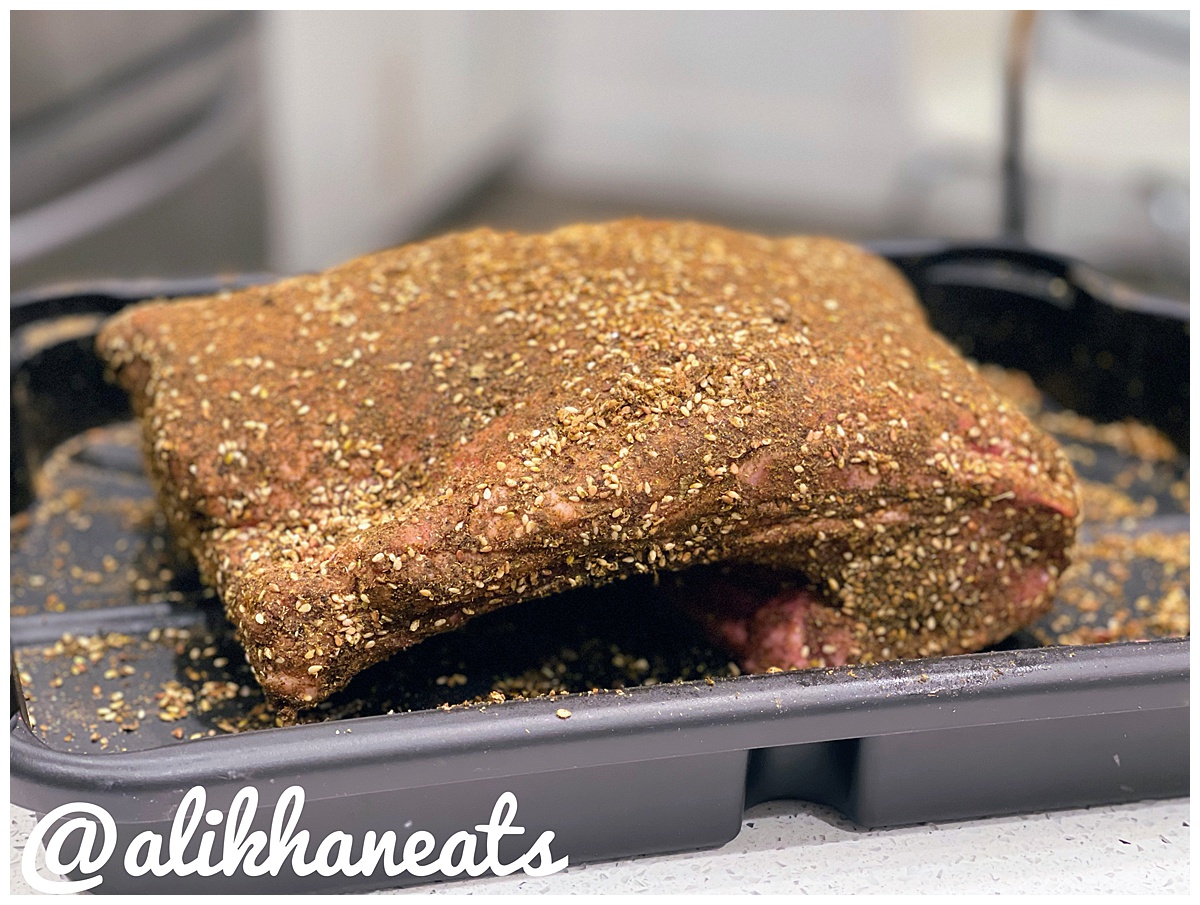 If you’ve made that rub than you have a lot, even for a 10+ pound lamb shoulder. TBH I don’t know what my shoulder weighed as it was sent as a gift but expect a hefty cut if you get a bone in one. Regardless be generous with both the rubs. Spices only go flat with time so make it rain. I did my rub overnight but Chef Abdoo said even as little as 15 minutes will do the trick. 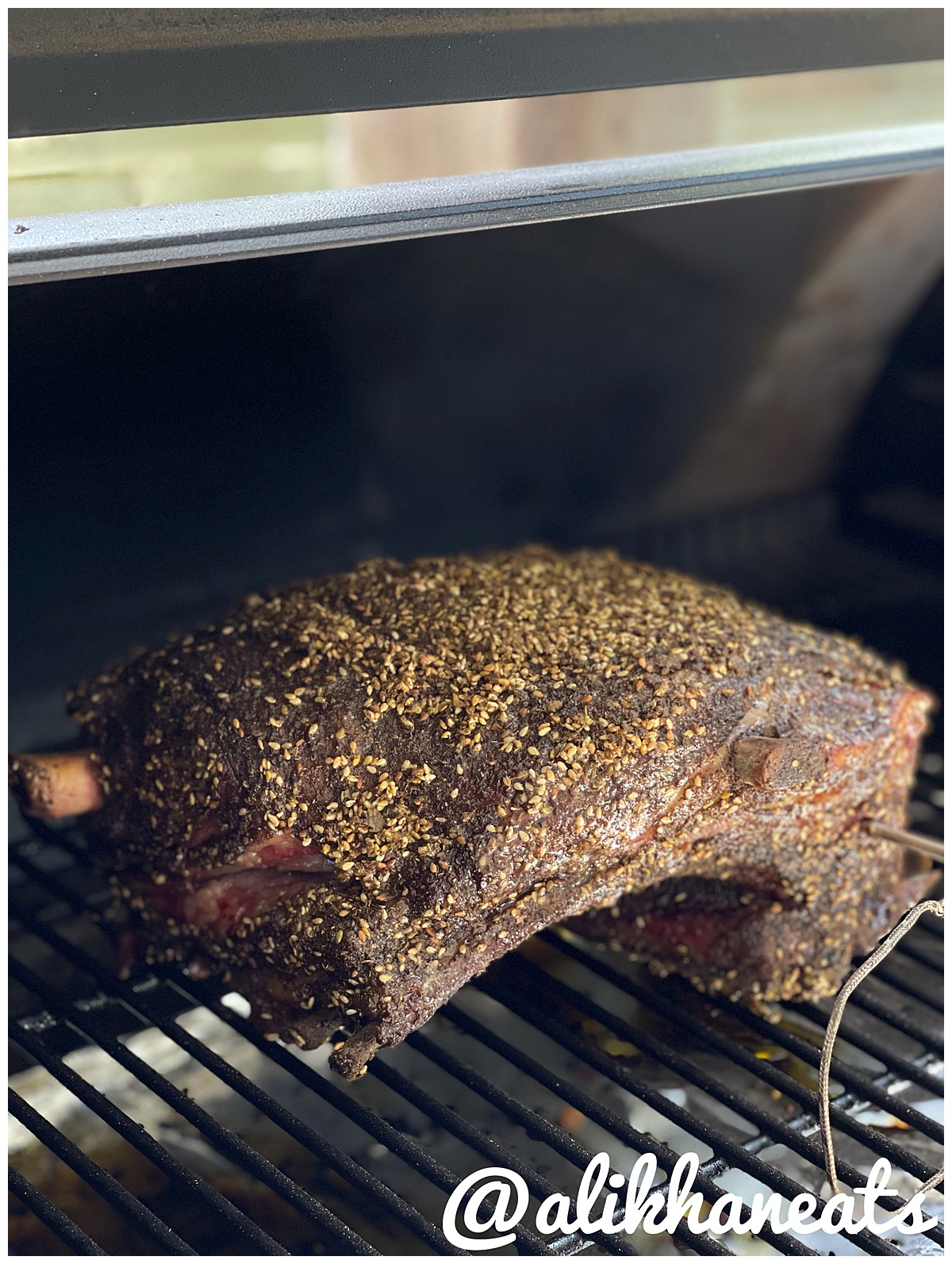 So get your smoker or oven set to 250 degrees. I placed my shoulder in my Traeger, stuck a probe in and let it cook till it hit an internal temp of 170 degrees. That took about 3.5 hours. After that it’s time to wrap. 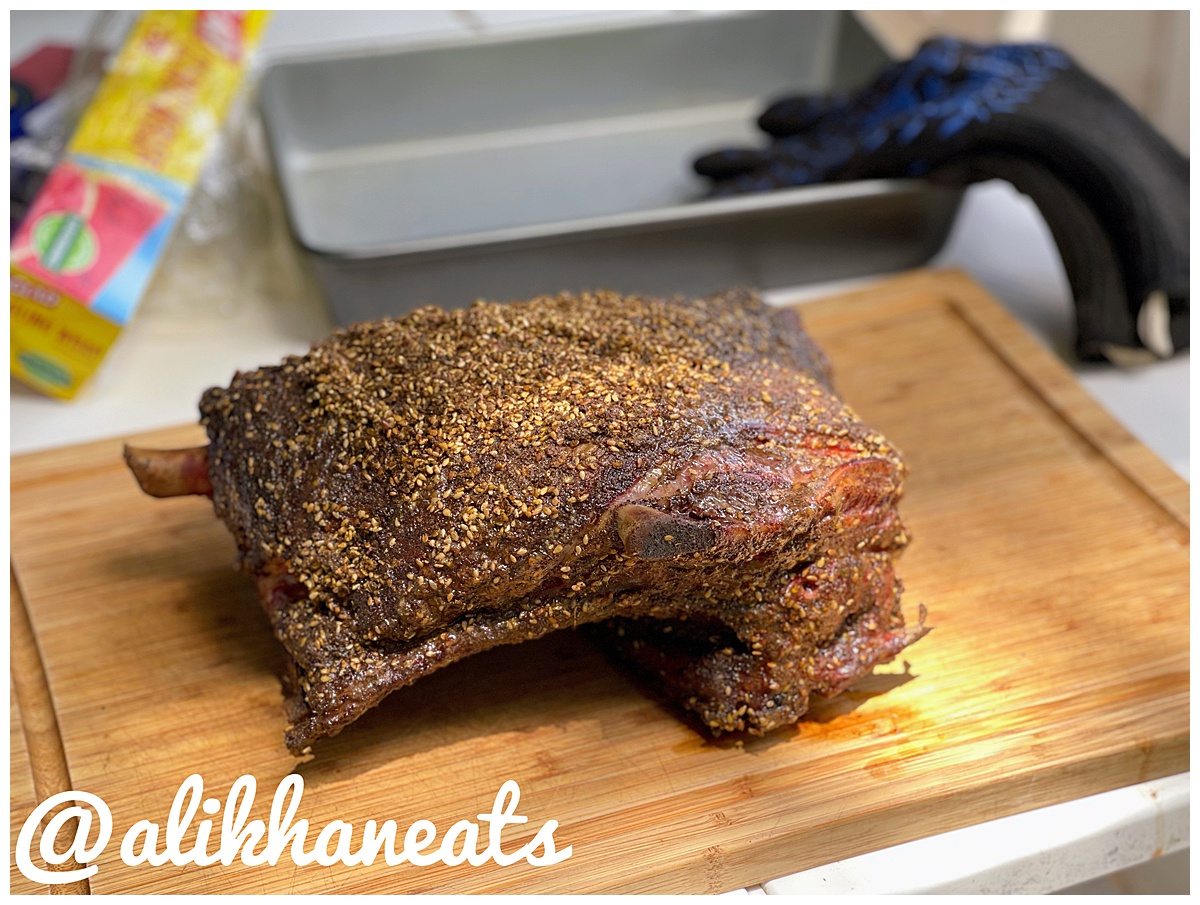 Chef Abdoo instructed us to wrap the shoulder in plastic wrap and then heavy duty aluminum foil. Now plastic wrap in an oven or grill sounds like a bad idea but it’s not the first time I’ve had professional chefs advocate for it. Suzanne Goin does so when braising a brisket in an enameled oven.

I took the leap of faith and did the same, though I texted Chef Abdoo to double confirm. Also after I wrapped the lamb shoulder in plastic wrap, I wrapped the lamb up in foil several times as the bones began to punch through the foil. Also I placed the whole thing in a baking pan to make sure I captured all the juices.

Back into the Traeger the lamb went till I hit an internal temp of 203 degrees, about another 3.5 hours. 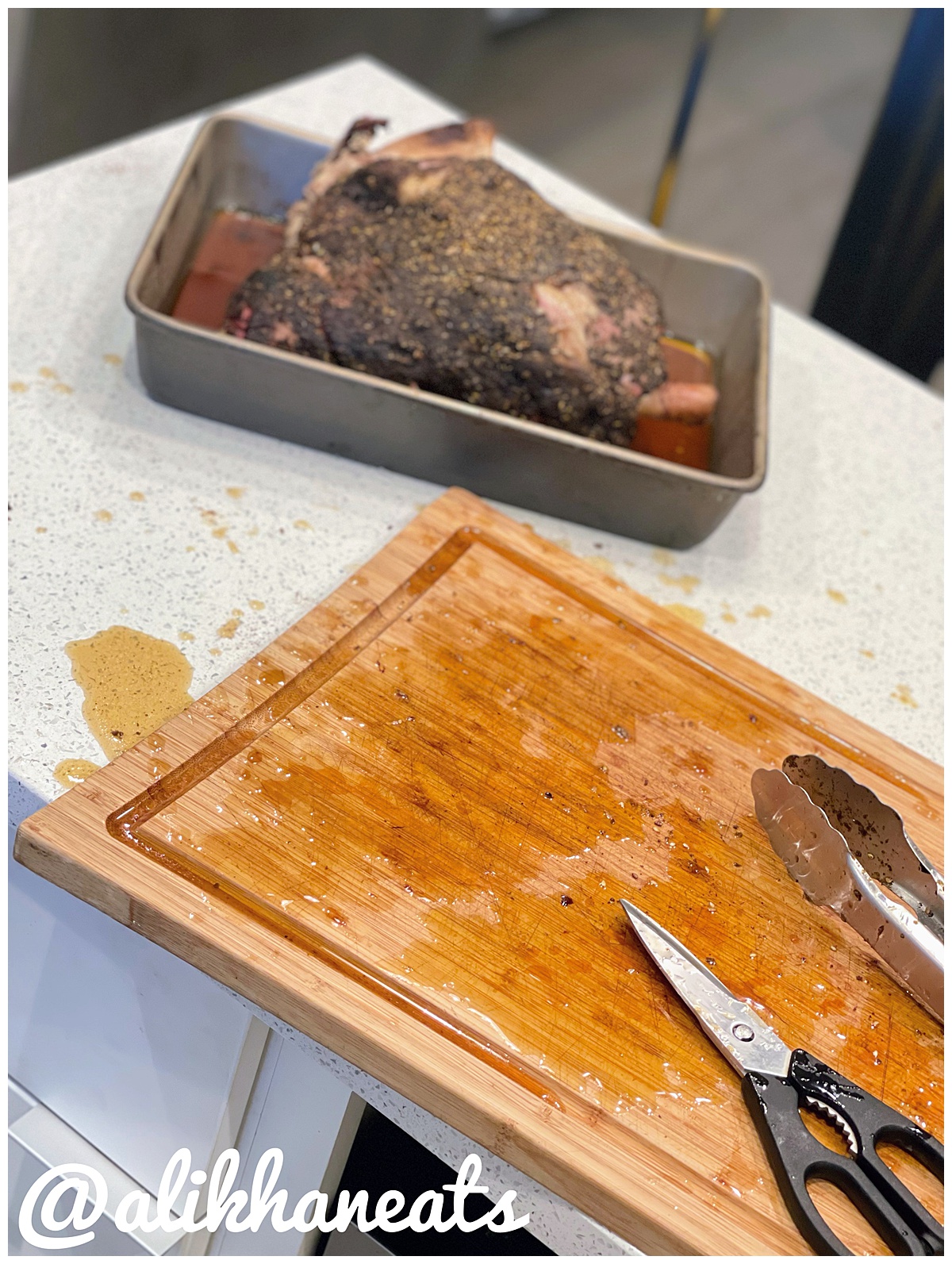 It’s gonna be a juicy

The plastic wrap didn’t melt, thank goodness. And it did the job because there was plenty of juice. To be honest, getting the wrap and the foil off was a little tricky + messy. I may reach for the peach paper next time. Regardless I freed the roast and let it rest in all it’s juicy glory. 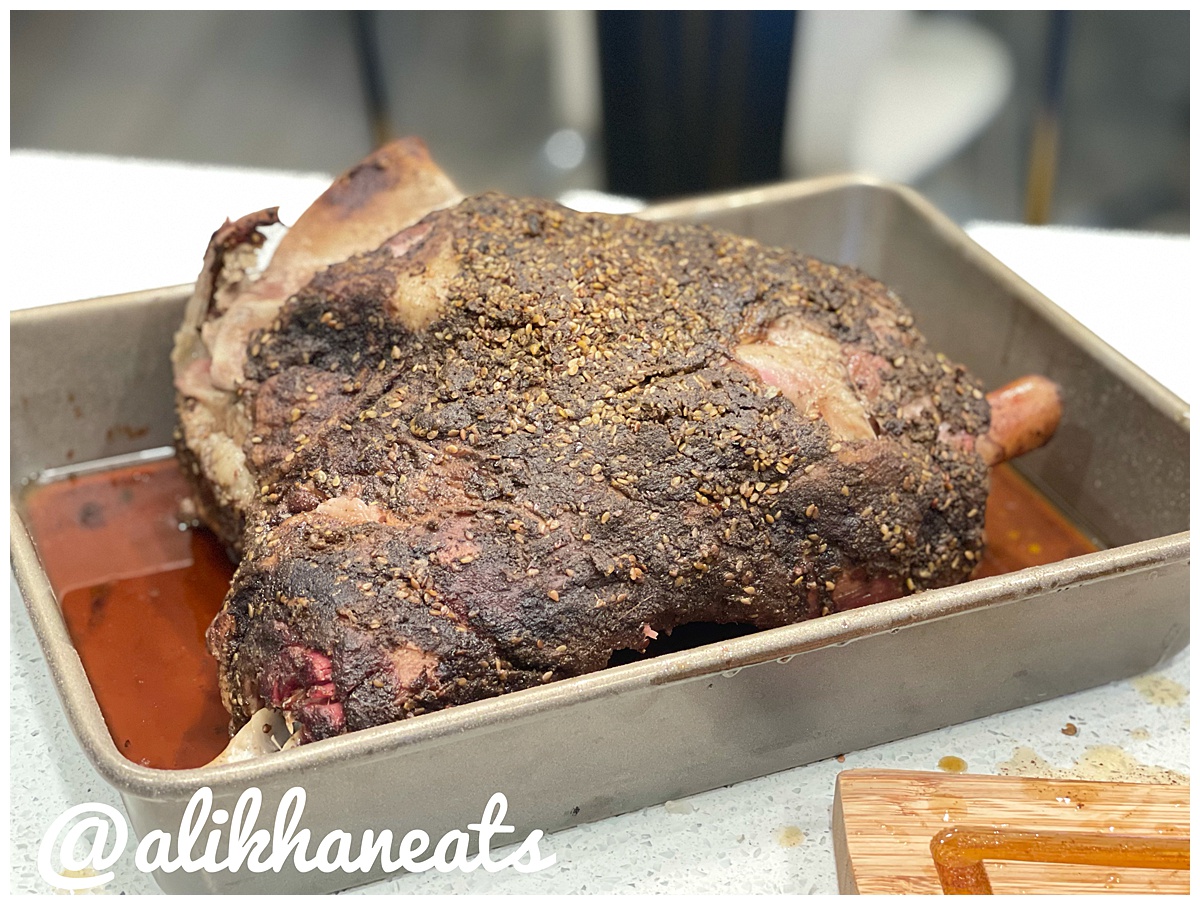 And on the seventh day, let the lamb rest

I should add that I let the lamb rest for a good 30 minutes before I unwrapped it. This is critical for the meat stay juicy after you pull it. Keep some paper towels handy. 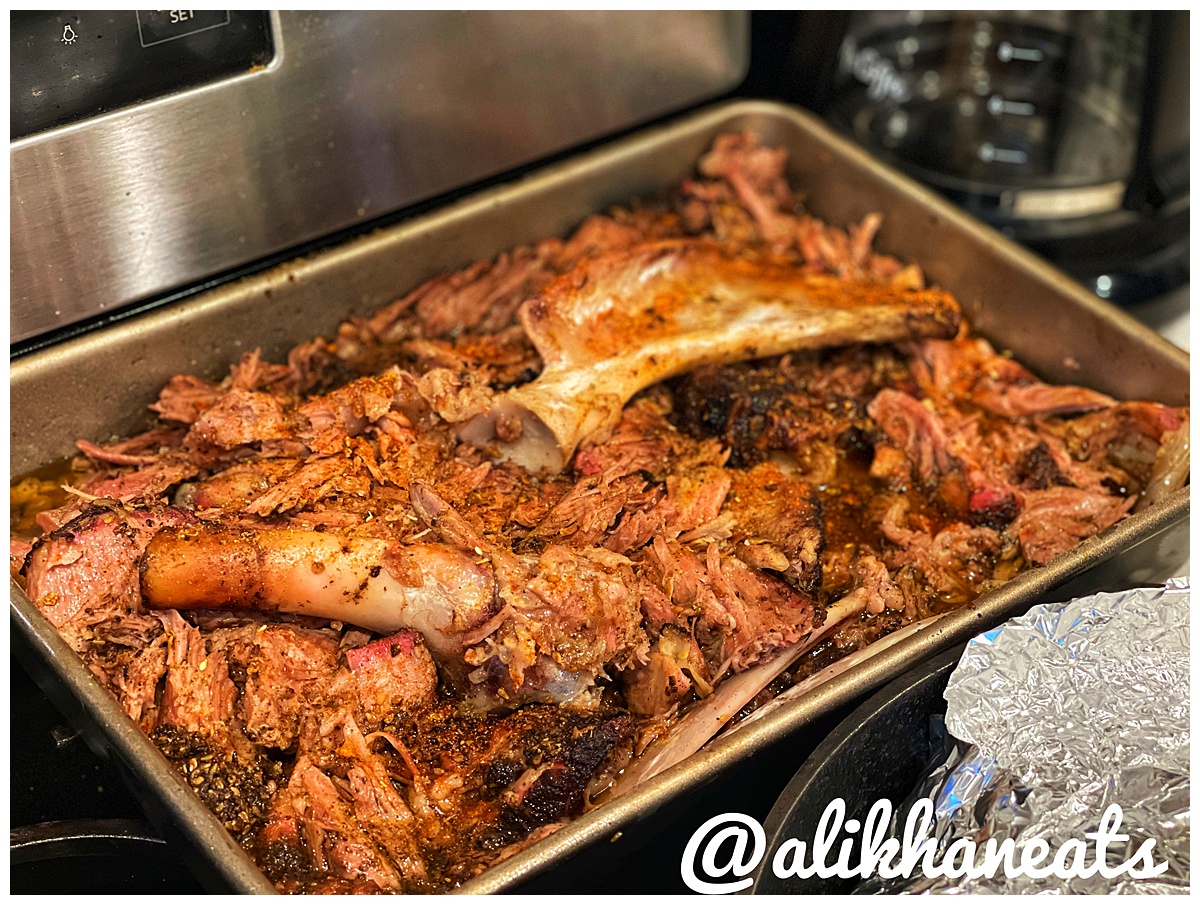 It was glorious whenI pulled the lamb apart. So tender, the bones came off without effort and event the fatty sinewy parts broke up well. There’s a section in a bone in lamb shoulder with the neck that one could remove because it’s super chewy but I left it in. My inner Bengali said “eat it all”. 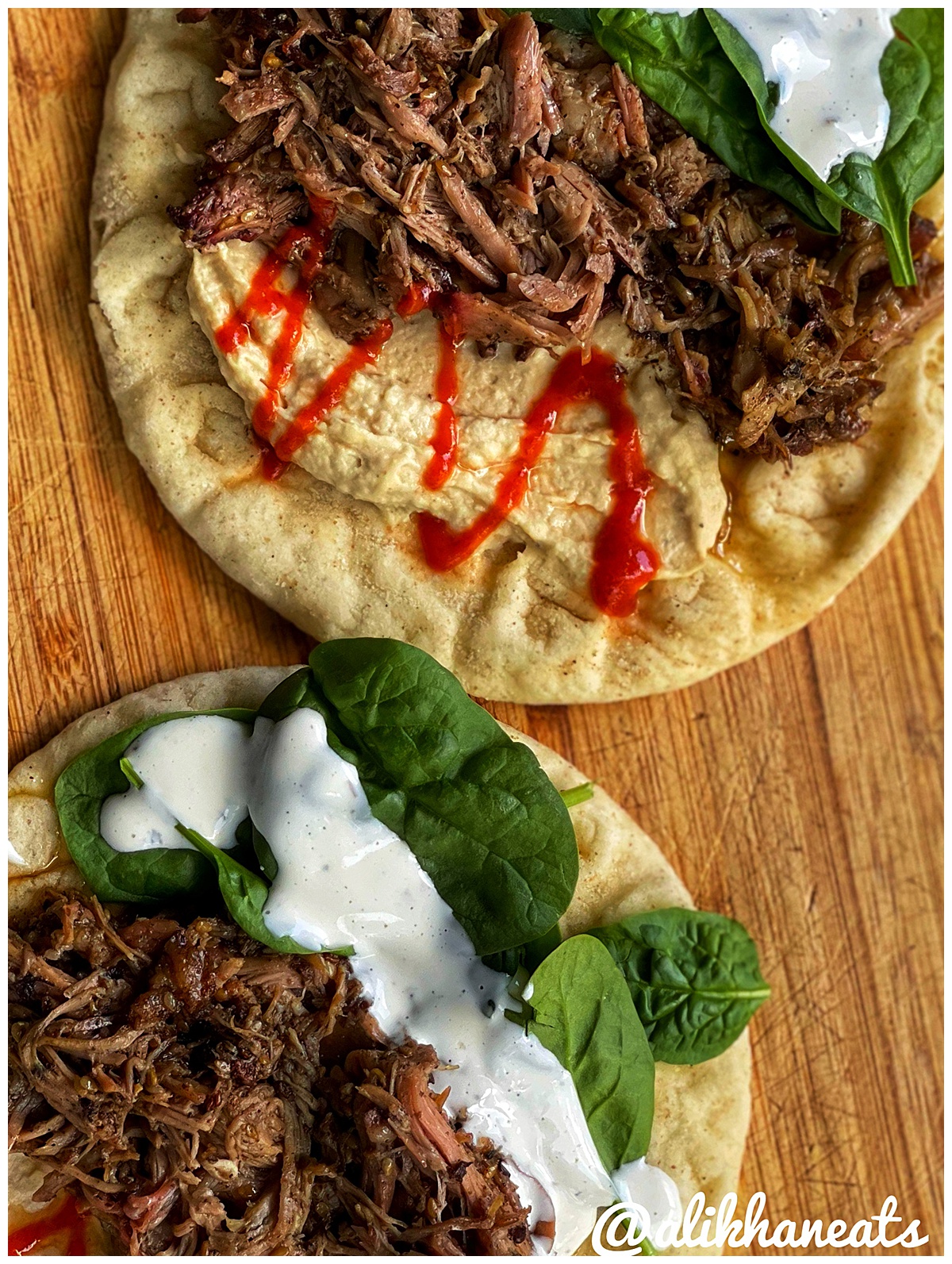 So of course one should eat this in a pita or lavash bread. Like having pulled pork in a bun, the right bread helps further the appreciation of such juicy and tender meat. I made some hummus to smear on the pita from a recipe I shared last year. I also made Chef Abdoo’s NYC White Halal cart sauce. That is a mix of mayo, yogurt, lemon juice, white vinegar, garlic powder plus some salt and pepper. Chef Abdoo likes to add dried dill, I opted for a dash of this: Cherchies Lemon and Dill seasoning. This is a recipe I prefer to drain my spice cabinet vs add to it.

PS – I hit that pita with a little sriracha like the Halal Carts in NYC do. One of those things that isn’t 100% traditional back in the day but it damn sure makes sense. 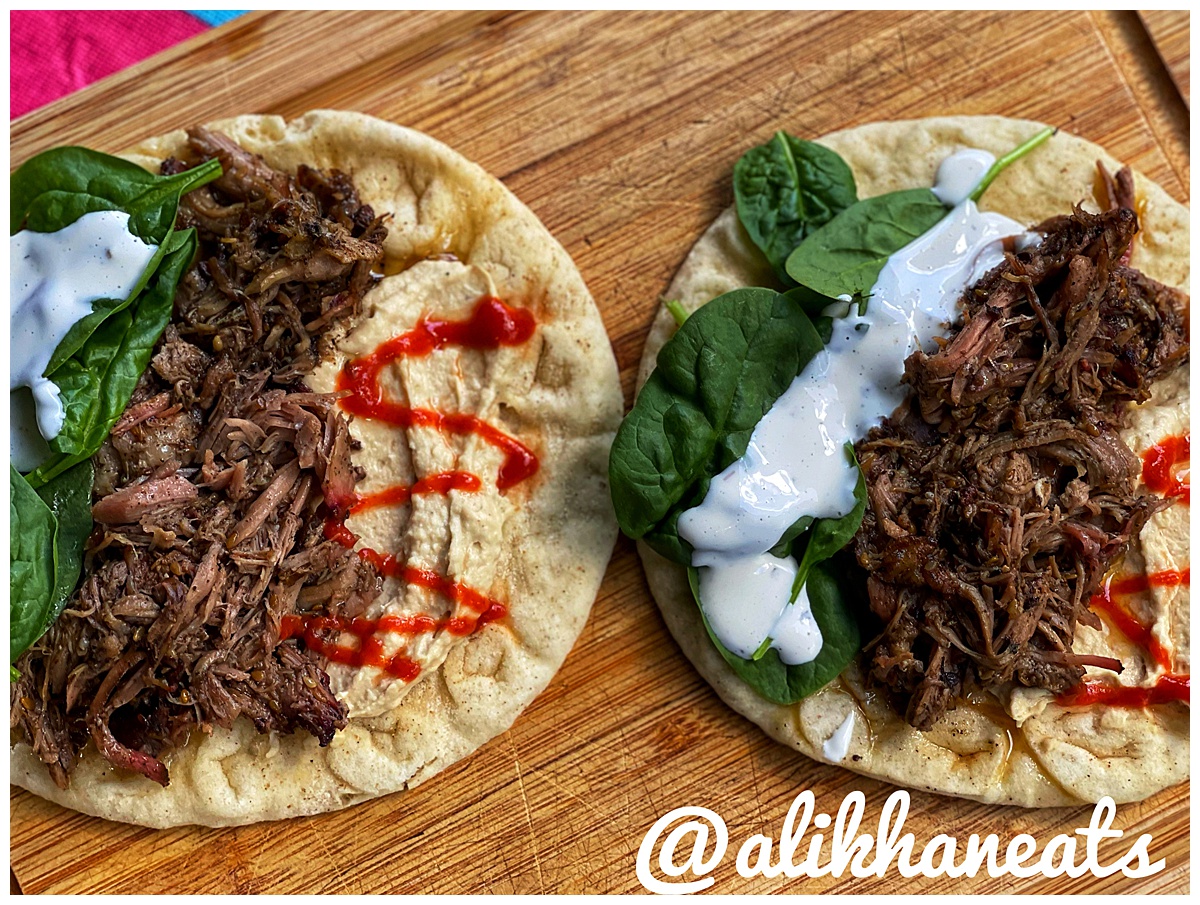 One of the best things I have ever made

In my 20s I lived off of shawarma plates with hummus, tahini, garlic paste and whatever accoutrements I would find at temples like Zankou Chicken in LA. This meal is that meets grilling at home, or in this case smoking at home. If you enjoy Middle Eastern flavors and like smoking meats, this recipe is a must and so worth the time. One of the best meals, maybe the best meal I have made on the Traeger. 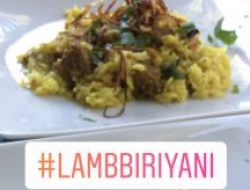 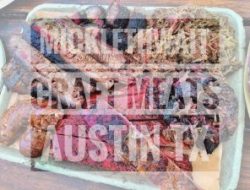