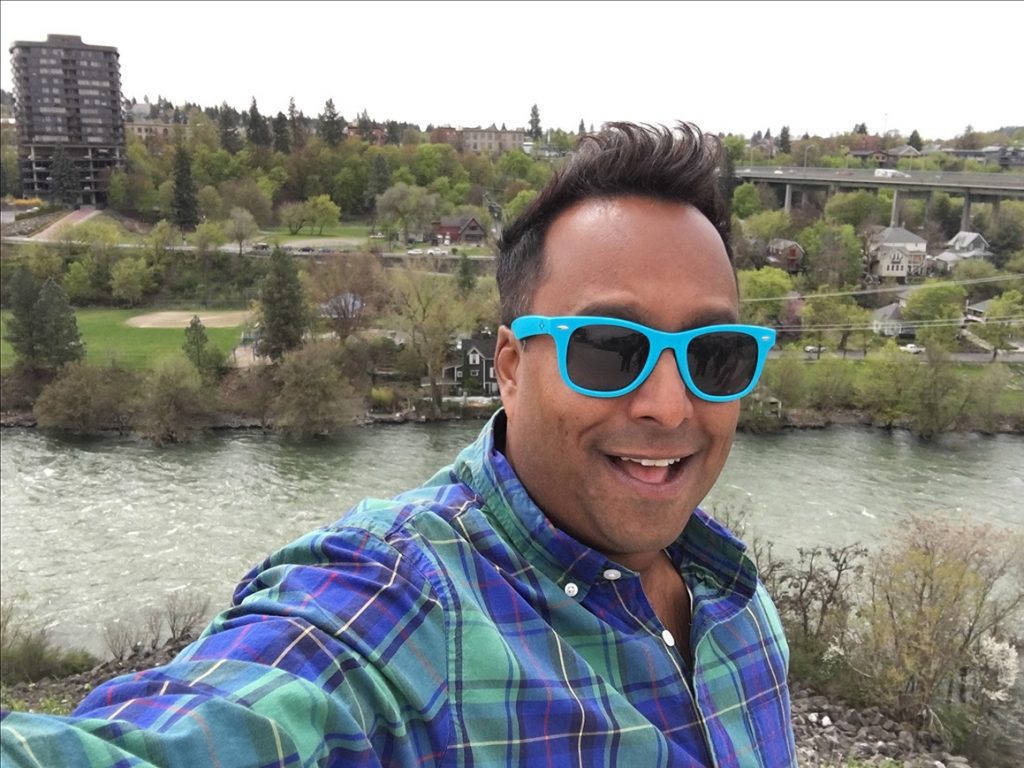 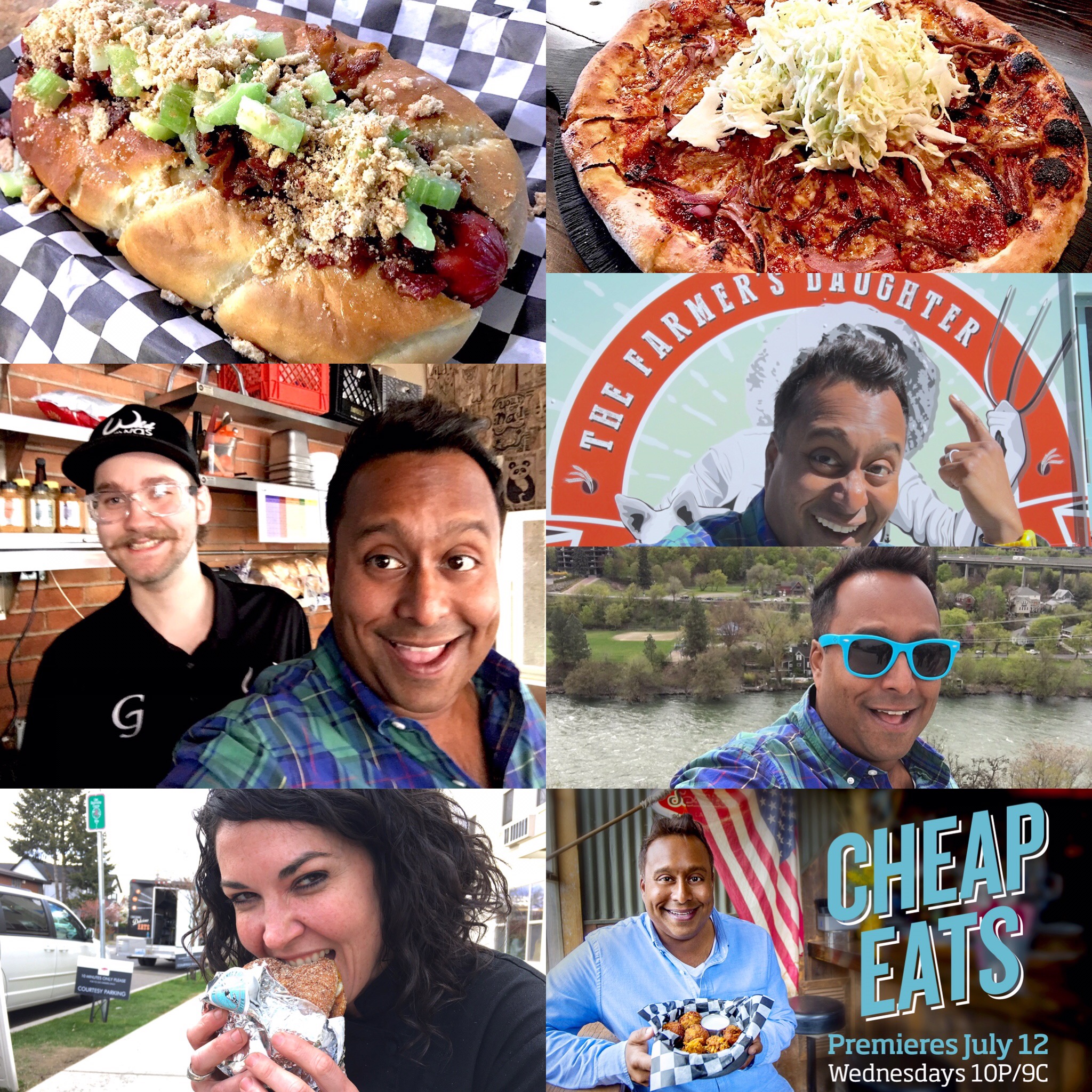 Spokane on the brain! Yeah, I definitely has Spokane on the brain. If you caught this episode you would have also caught on to the fact that the crisp air caught me for a bit of a cold. I give props to the magic of television and the amazing people serving up Cheap Eats in Spokane, who helped me pull through what was the toughest shoot of my life. I think this episode flowed and the energy I found here was surging at the thought of this food scene getting some of the National spotlight. But that’s all TV talk, and we are here to talk about some Cheap Eats, on the EASTSIDE of the Pacific Northwest. So let’s go get into it! 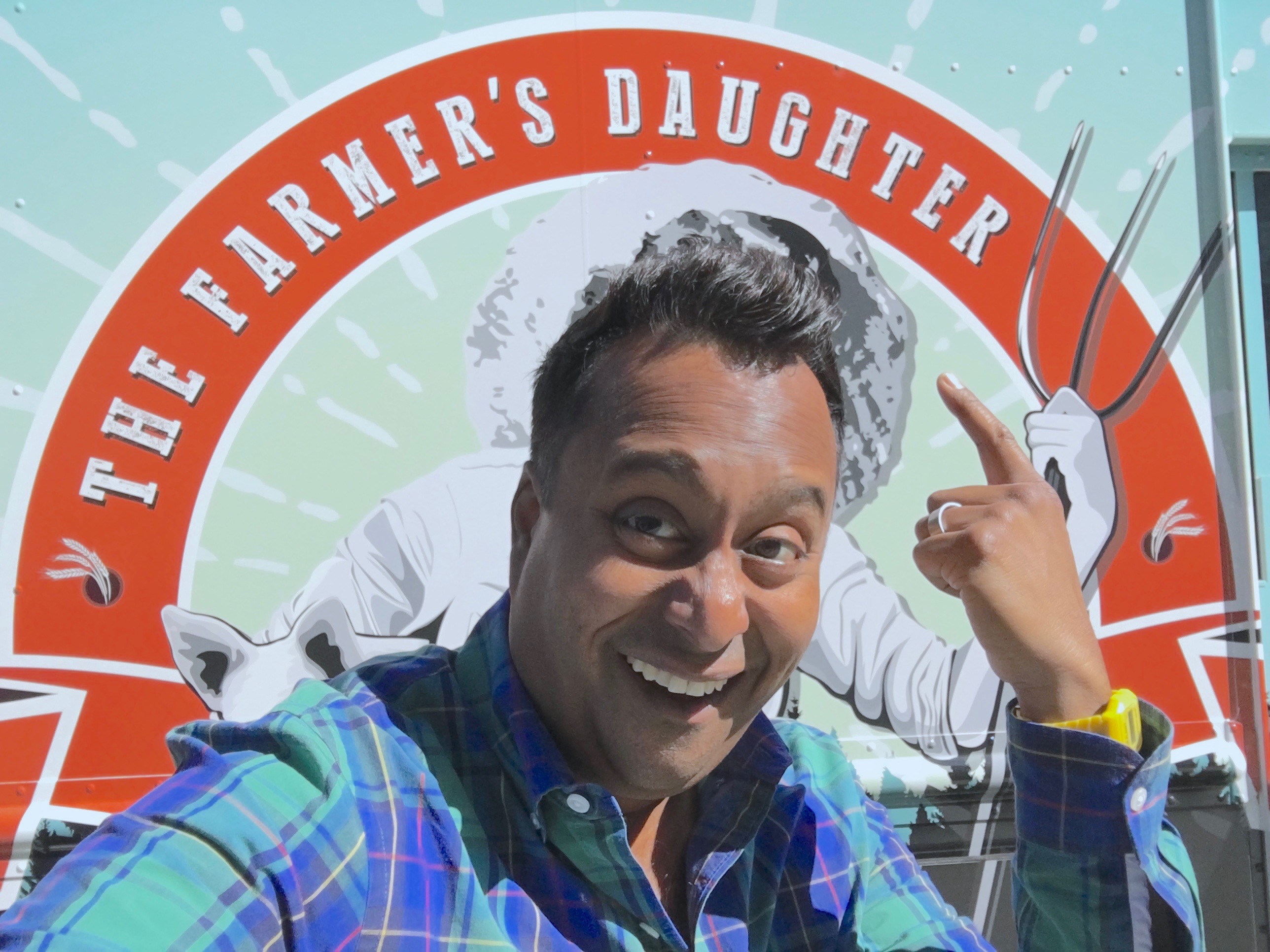 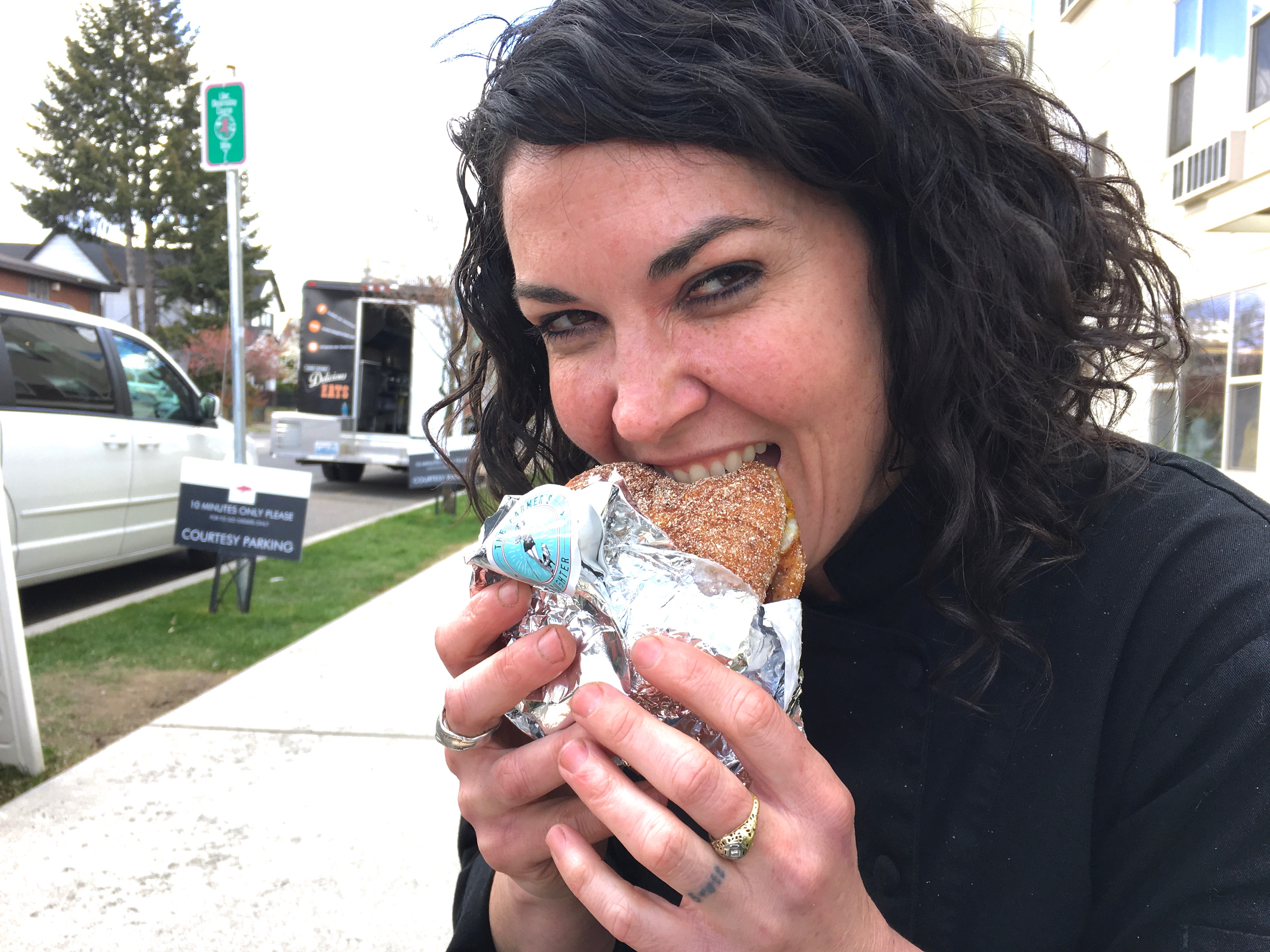 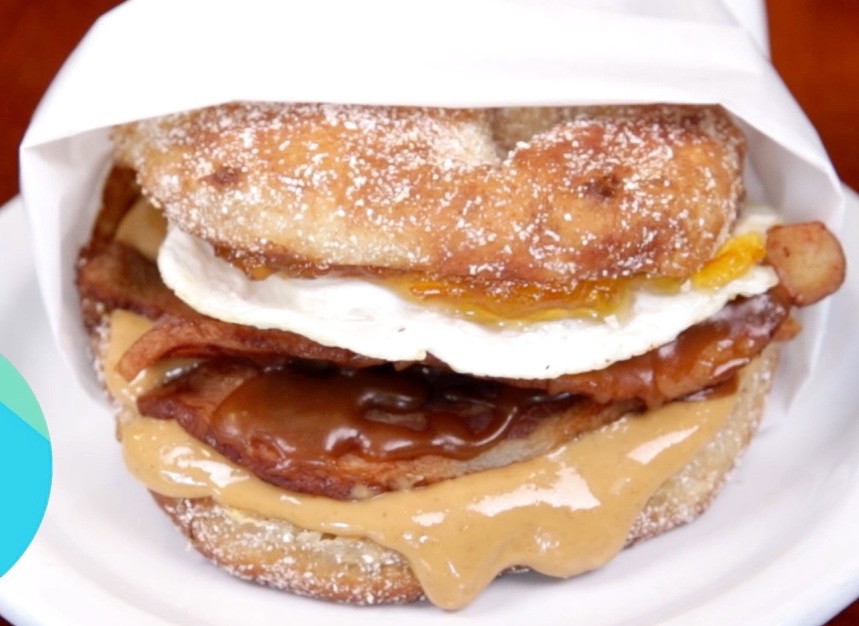 The Vitals:
the spot: The Farmer’s Daughter this girl runs on rubber so check facebook for the food truck’s location
the eats: PBJ + Bacon
the bucks: $8
the full nelson: farm to table on four wheels

Farm to table and food trucks have been dominant movements in the American food scene in the 21st century. Now before I go all PBS on you, I will cut to the chase: merging these two dominant movements could very well be the future of  a healthier faster food. Which doesn’t mean just salad wraps and pressed juices either. Gluttony can be attained in this enlightened fast food setting such as the PB+J: a breakfast sandwich that features an in truck English muffin, homemade pecan butter, jowl bacon, homemade marmalade, a fried egg, and topped with a butterscotch drizzle. I mean, it reads like food porn, so you pretty much know it’s gonna look like it too. Still, this packed breakfast sammy wasn’t exactly ginormous either. It really didn’t need to be as rich components like bacon and pecan butter do their job in small doses. Sandwiches this rich tend to lose friends like side dishes because there pretty much isn’t any need. Just pay your $8 and roll on with your day knowing that you started it off in a decadent farm to truck, only Spokane kinda way. See, I told you I wouldn’t go to PBS on you. 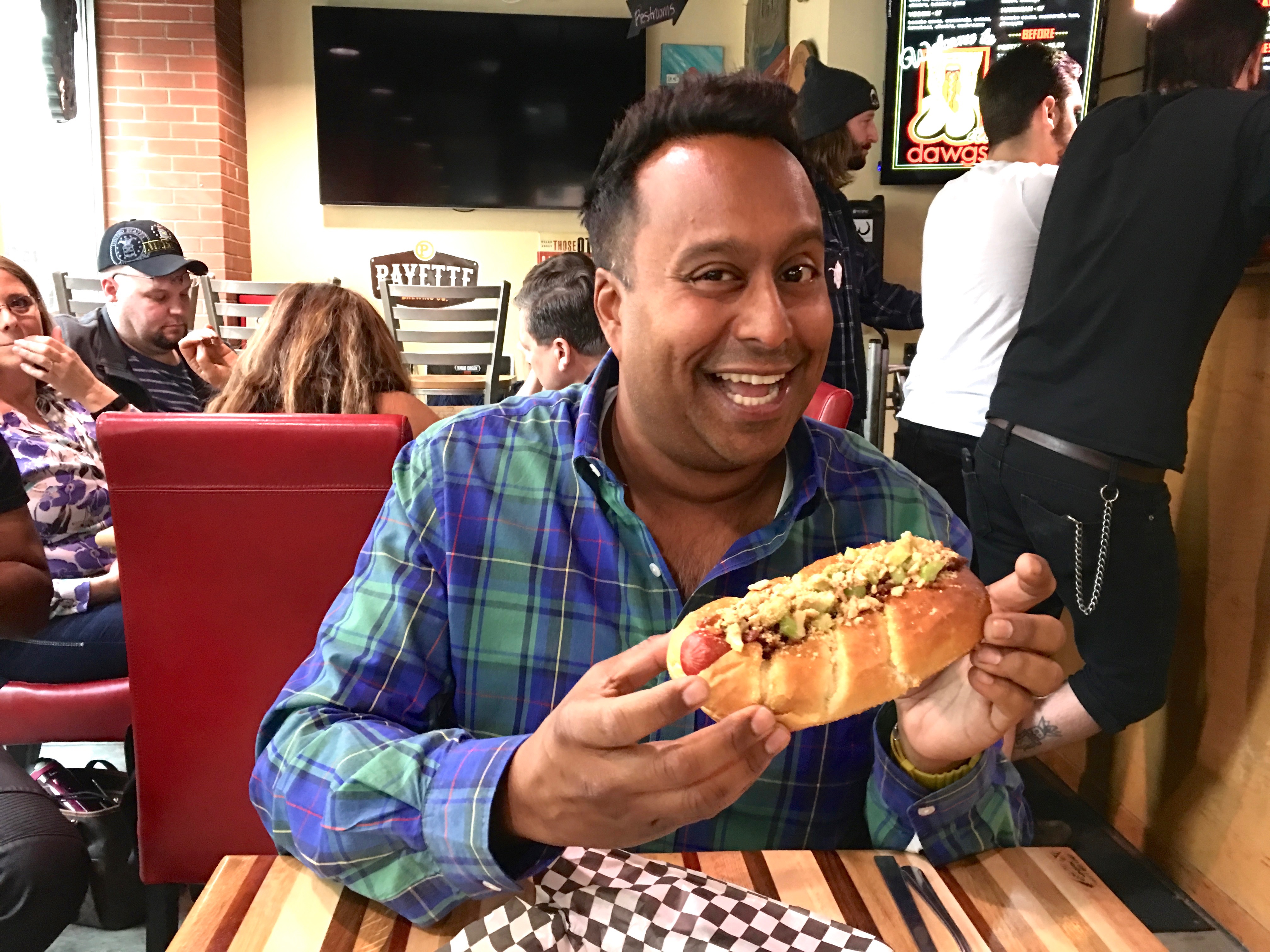 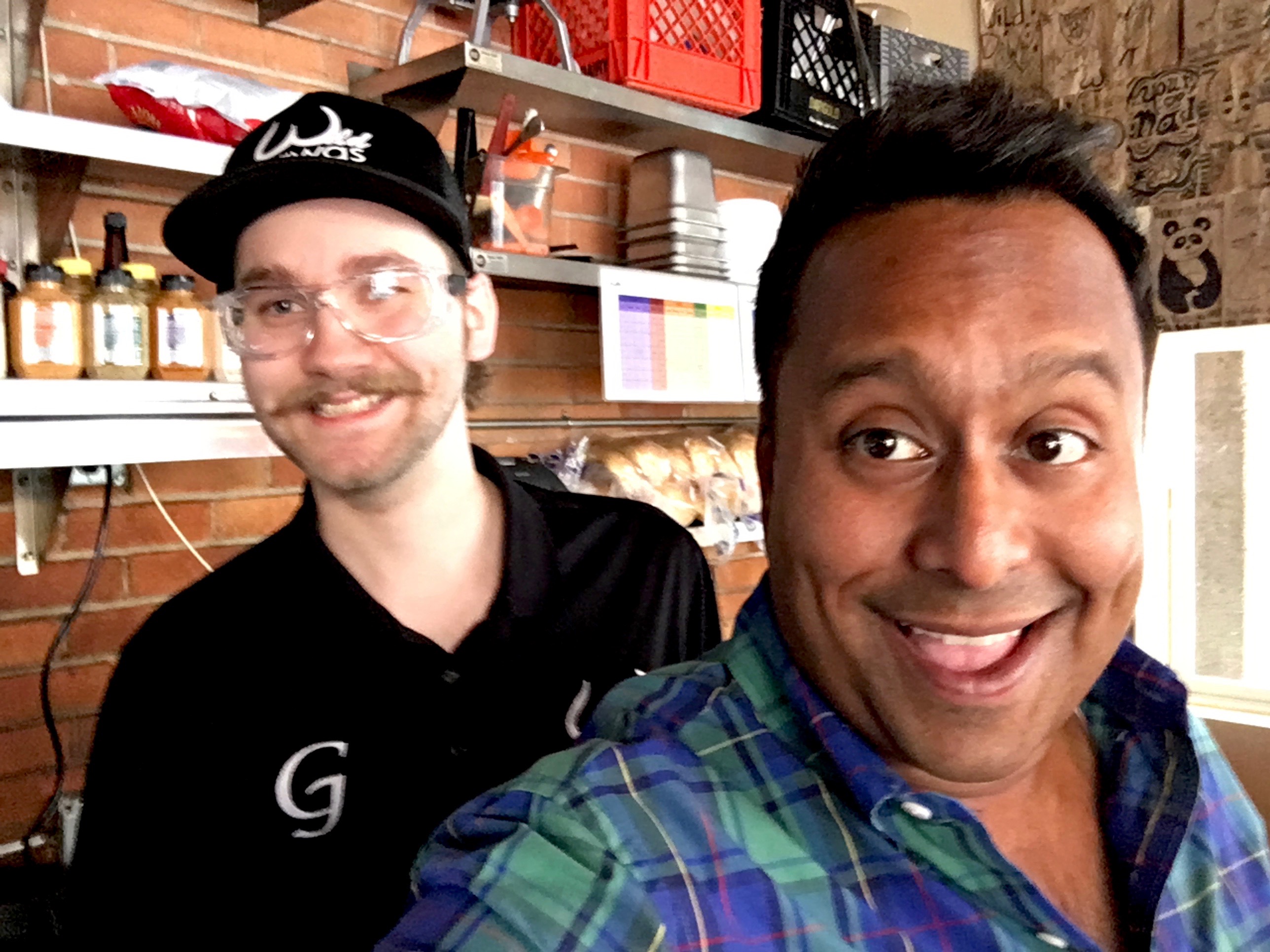 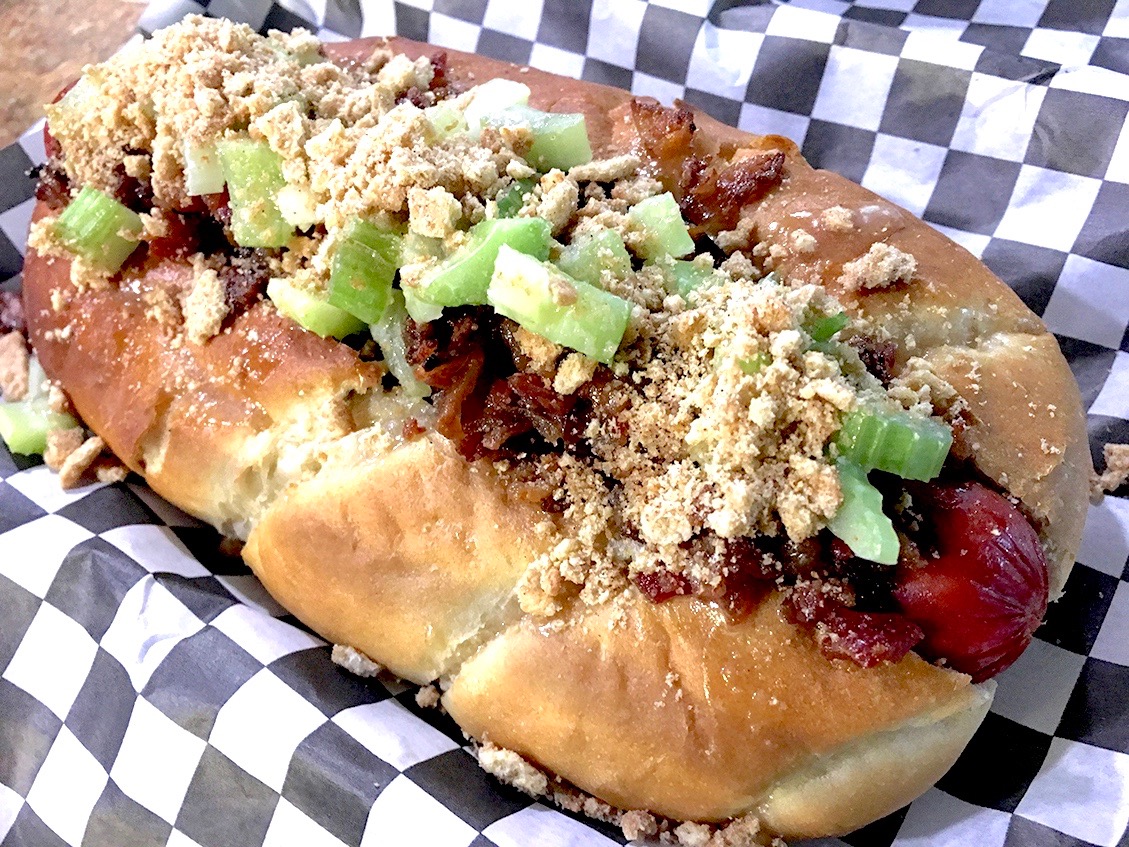 I didn’t go to college in Chicago, but sometimes I wished I did. If I did, I’m sure I would have become hot dog savvy by the time I was breaking my early 20s. Kinda like my boy Garrett here who has serious game when it it comes to hot dogs and working in pro kitchens. When you hit 40, you get to call people like Garrett a kid but this “kid” is nothing short of an artist when it comes to making Hot Dogs. Cased meat in point: he comes up with five different hot dogs in his test kitchen but usually only one will make it on to the menu. Putting in this much work has me thinking this Hot Dog artist might go all Van Gogh on me one day and add a sliced pig’s ear onto one of his Hot Dog concoctions. Unless you are into the whole nose to tail thing, the pig’s ear thing could sound a little cray cray. Or Garrett could make it all work with a little Cinnamon Toast Crunch, maple syrup, bacon and celery on a 1/4lb Boar’s Head all beef hot dog, like he does with the Ode to Ontario. No matter what he piles on the dog, know that you will walk out of Wild Dawgs for no more than $10. If only I walked out of college with a tab like that. 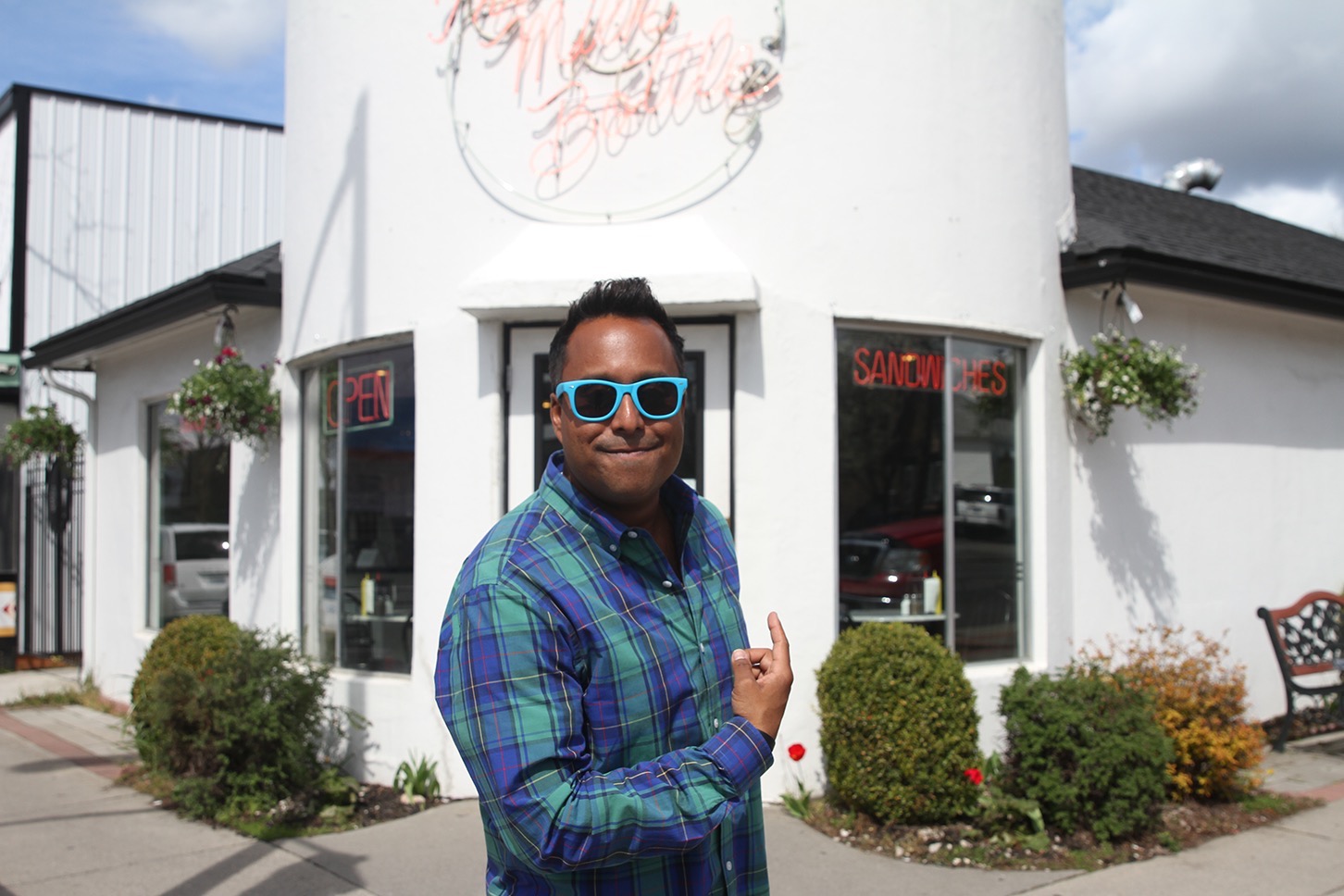 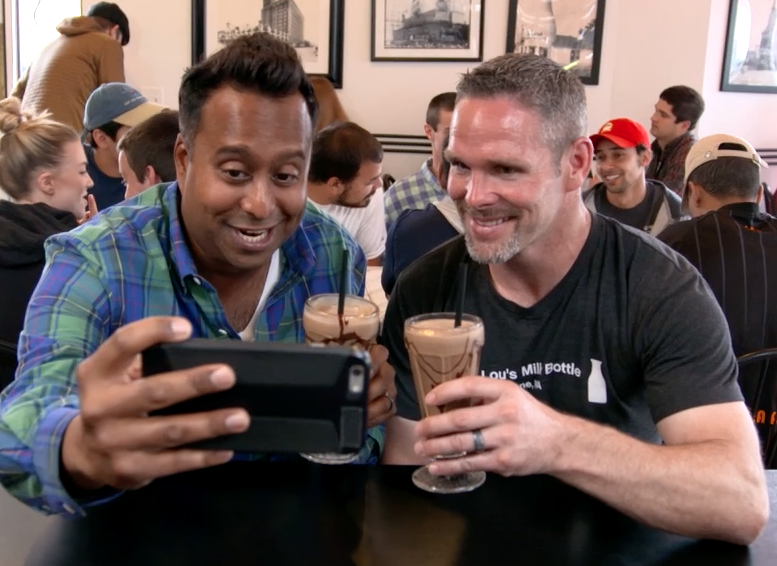 Anyone who said you should avoid dairy if you are fighting a cold, clearly has never stepped into Mary Lou’s Milk Bottle. This shake was pure pleasure on an irritated throat. Yes my friends, I am advocating ice cream as medicine although you should consult a physician before beginning any Cheap Eats diet. Beyond a name that implies a steamboat race with Tom Sawyer and Huckleberry Finn, the River City Sludge is a chocolate lover’s dream of a milkshake. Like all the shakes at Mary Lou’s Milk Bottle, the base is their homemade ice cream, in this case chocolate, mixed with homemade brownies and homemade fudge sauce. Detecting a theme here yet? I have said before, snack time on Cheap Eats is playing with house money, but I can think of no finer a time to score a milkshake(especially a 20 oz one) than as your afternoon snack. You are guaranteed to not spoil your dinner, well, maybe dessert. But on the bright side you are well on your way to fighting a cold. 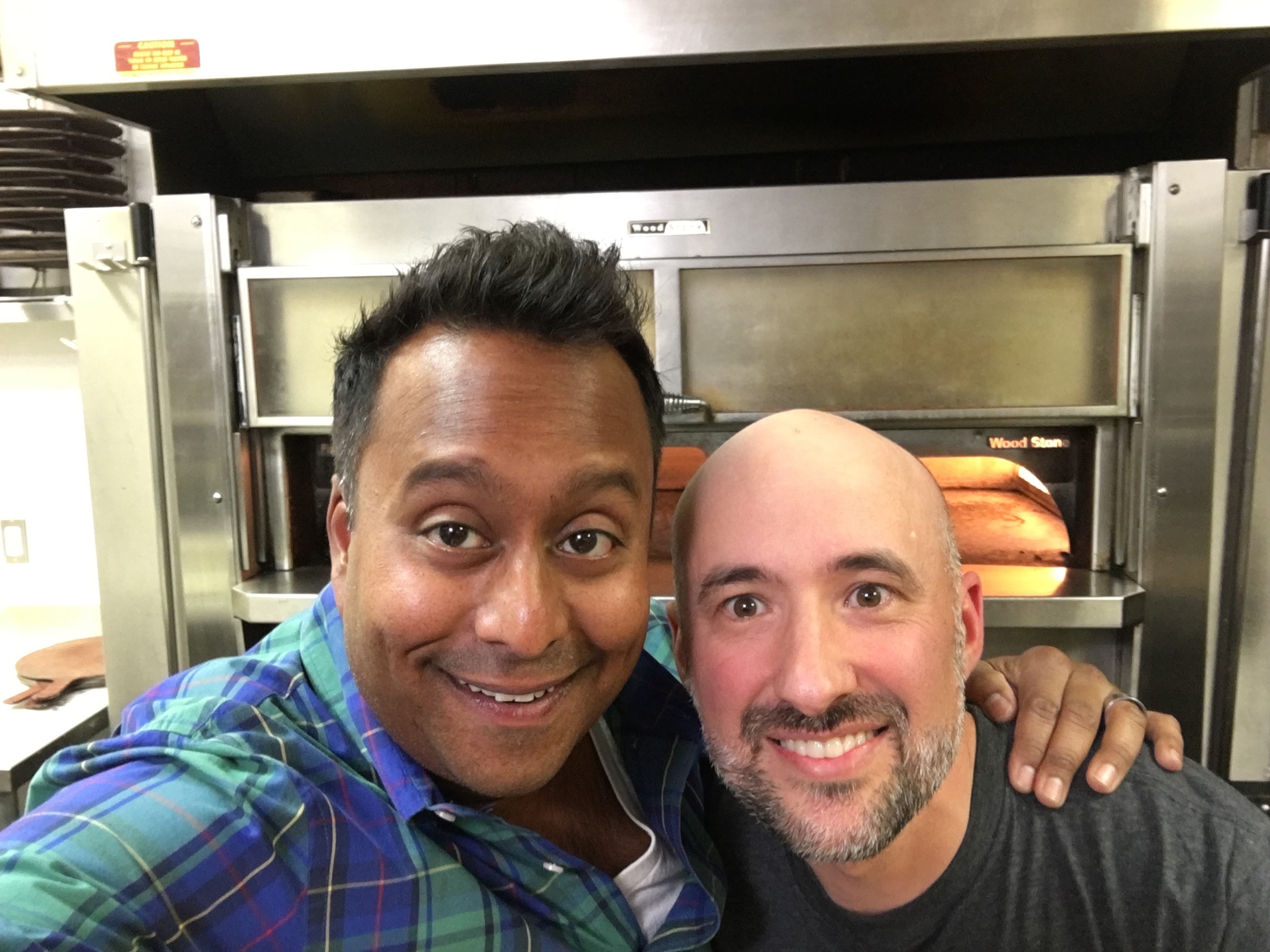 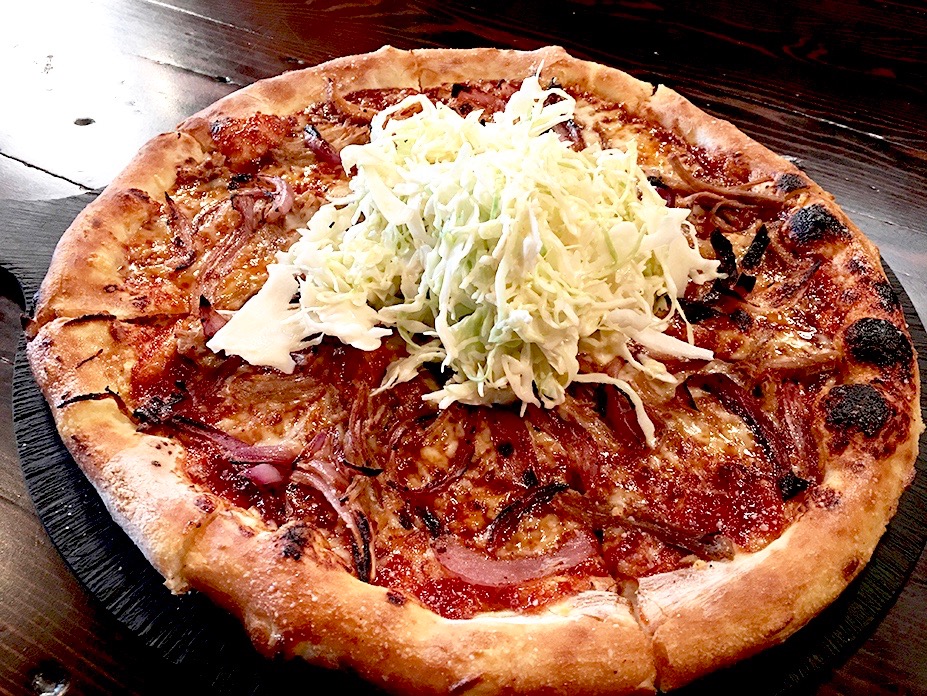 The Vitals:
the spot: Flying Goat 3318 W Northwest Blvd. | Spokane, Washington 99205
the eats: The Dalton
the bucks: $14.50
the full nelson: worth the money for the Roadhouse movie reference.

“It was a good night. Nobody died” – Frank Tilghman, Roadhouse.

I would agree with this statement. I would also add that a night featuring the Dalton as your dinner would make for a great one. Roadhouse references aside, the Dalton pizza is proof that sometimes we do need to play with two foods perfectly fine on their own, in this case pulled pork and pizza, and carefully walk that precarious line that is fusion cooking. Way back when, like in the 1980s, an important pizza chef named Ed LaDou created the BBQ Chicken pie for California Pizza Kitchen. This act of pizza making ingenuity came after he had been making creative pizzas for well over a decade in the Bay Area before being discovered by Wolfgang Puck and literally commencing a creative pizza program at the legendary restaurant Spago. For some, like myself, I take pizzas like the BBQ chicken pizza for granted. Certainly interesting and warranting the right mood, a bbq chicken pizza shows what you can do with food when you are open to change and willing to take risks. BBQ chicken pizza isn’t for everyone, but it certainly worked and ushered in a whole new genre of pizza: California style pizza. Well here we are now, in 2017, in Spokane Washington, and the torch of Ed LaDou’s pizza making creativity has been passed to Chef Darrin Gleason. Pulled pork makes a lot sense when you think about how well BBQ chicken worked out as a topping. But, purist that I am, I was a touch hesitant at first. What you have to remember is that pulled pork is just one topping, and pizza is about more than toppings. Like the style of crust for example. In the case of Flying Goat you have a Neapolitan style crust, of medium thickness and cooked in a 600 degree oven, carefully charred at the edges. The resulting browning of the crust along with the strong umami from the slow cooked pulled pork are perfect complimentary flavors. Flavors that invite the crisp creaminess of the coleslaw placed on top of the pie, the sweetness from the honey and the acidity of apple cider vinegar, both of which are found in the bbq sauce. Yes, this pizza just works. And I think Dalton, certainly Chef Ed LaDou, would approve.

And that was Spokane, Cheap Eaters!! A tasty side of the Pacific Northwest that you might sleep on with Seattle drawing in the crowds. But don’t sleep on Spokane. In fact I would stay sleepless in Spokane. Hey, anyone feeling a sequel? Should I call Hollywood? They do have a thing about budgets and I can get definitely say the cast and crew WILL eat on the Cheap in this town!