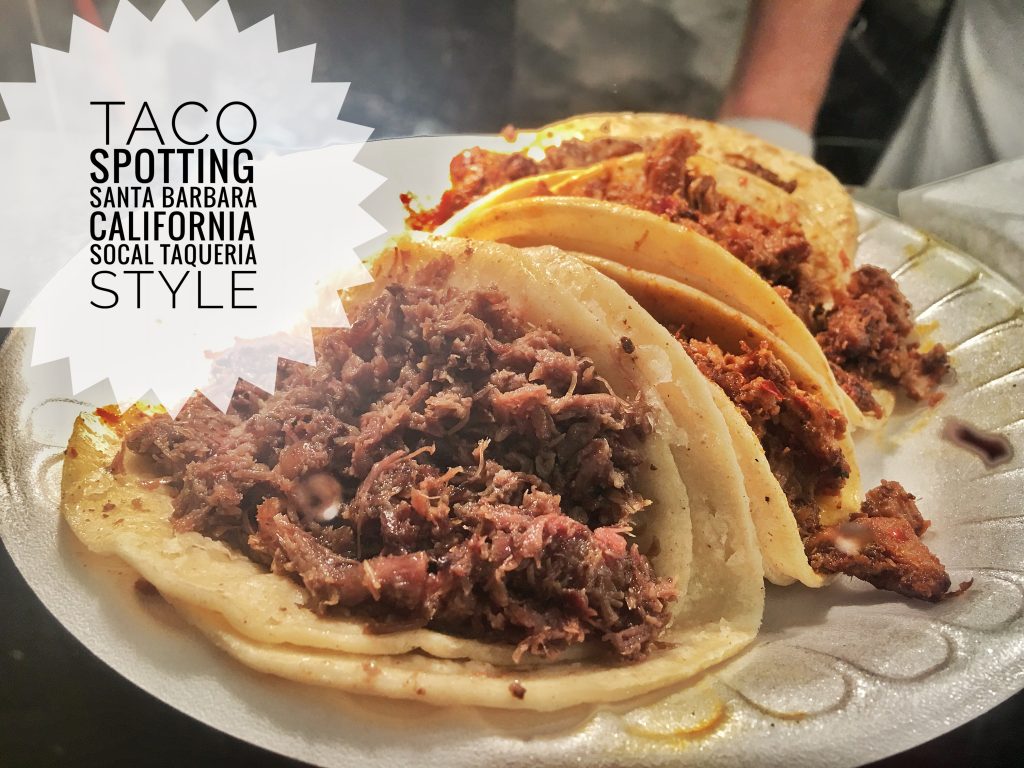 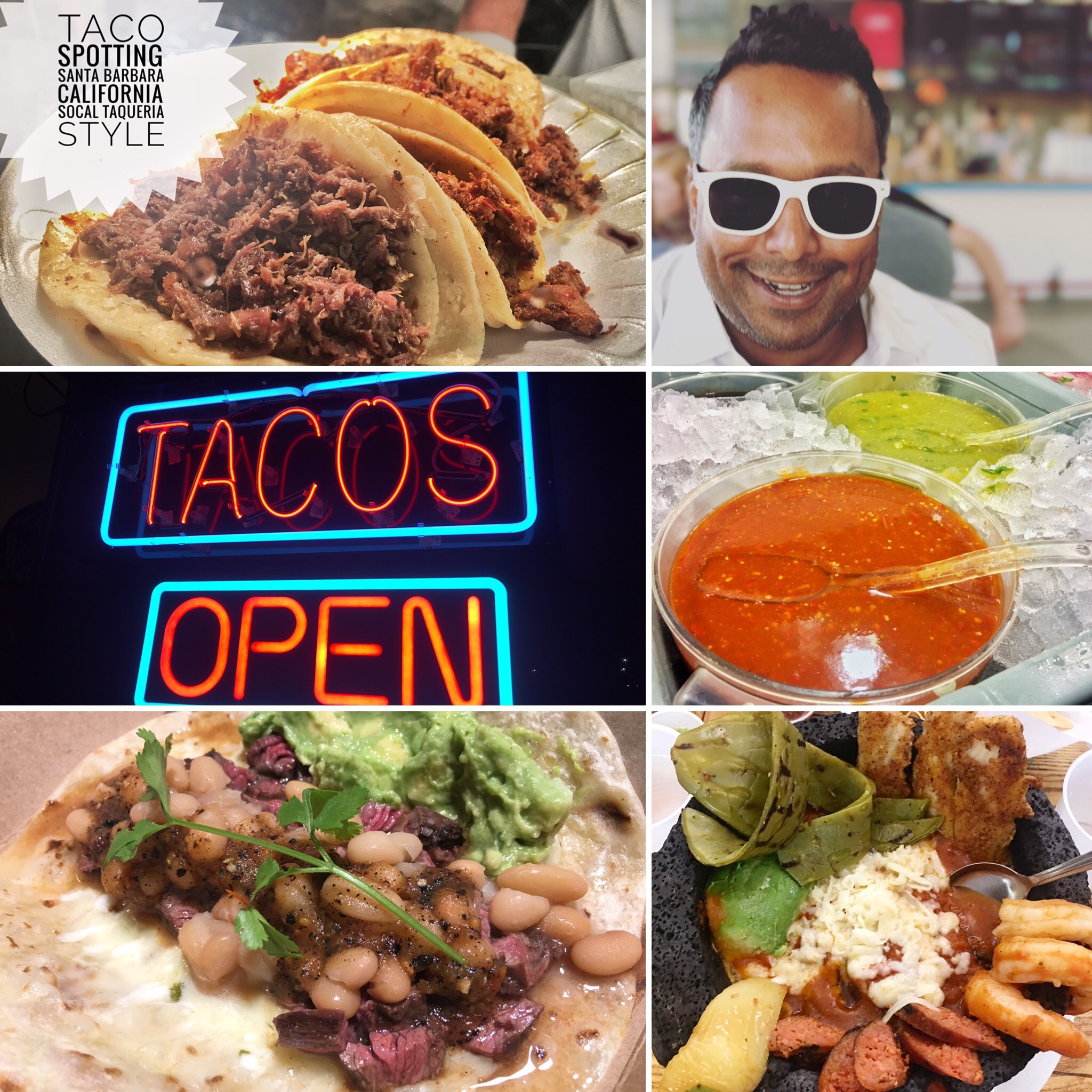 There is a movement happening in Texas to declare tacos the official state food. I see a good case for that, although brisket is a strong contender as well. In California, I think making the taco the official state food would be nothing short of a slam dunk. Sure, Southern California is the birthplace of the fast food burger and up in San Francisco, a whole style of burrito awaits you. Still, North or South, big city or quiet surf side town, tacos rule in California and the Santa Barbara Taco scene is no exception.

The Vitals:
the spot: Los Agaves Three locations in the Santa Barbara area
the eats: Molcajete
the bucks: $23.95 (feeds 3)
the full nelson: cross between a sizzling fajita platter and a Chinese Hot Pot that makes a lot of tacos

You’re probably saying right now “what is that Ali? I thought this was supposed to be a post about Santa Barbara tacos?” Allow me to explain. So what you are looking at above is called a “molcajete” which is essentially a mortar and pestle that dates back to pre Hispanic Latin America. Meaning they were probably using these things in the movie Apocalypto, Mel Gibson definitely was drinking out of them . . . Mine came loaded with fish, steak, pork, chorizo, a Mexican spiced tomato sauce and loads of melted cheese. What’s not to love right? I can’t even begin to count how many tacos I got out of this sizzling hot pot of Mexican goodness but suffice to say the $24 I spent could have fed three of me.

Beyond the Molcajete you can expect to find loads of interesting entrées, like molé, alambres and huaraches at Los Agaves, but you will still find plenty of familiar fare as well like Chimichangas, fajitas and of course tacos. This place gets packed, the prices are reasonable and the food is on par with you would expect from a full service restaurant – at Los Agaves you order at the counter.

If you are on the hunt for a Santa Barbara taco, Los Agaves will definitely be a solid stop. But as long as I can fork over the $20+ for the molcajete, I’ll be happy to make my own tacos out of this sizzling cauldron of meaty Mexican goodness.

The Vitals:
the spot: Lilly’s Taqueria 310 Chapala St. Santa Barbara CA 93101
the eats: Carne Asada, Tripas, Adobada, Cabeza, Cachete, really any taco you want
the bucks: $1.90 each. 4-5 will stuff you good
the full nelson: most hard core tacos in a ritzy area EVER

I’ll just get to the point here: Santa Barbara is the playground for the wealthy and smack dab in the middle of downtown Santa Barbara is a taco spot so hardcore they serve beef eye balls and lip tacos . . .  I have encountered such tacos only once before, deep in South Central LA, so it is safe to say that Lilly’s is a find. And I have Chef Adam White from Santa Barbara Shellfish Company, who we featured on the dinner segment of Cheap Eats Santa Barbara to thank for leading me here. A little lesson here Cheap Eaters: ask chefs where they like to eat.

Beyond the succulent tacos, Lilly’s Taqueria reminded me that Southern California rules the salsa bar game when it comes to eating tacos on this side of the border. The selection of zesty and spicy salsa options is just spectacular. Bottom line: if you are looking for a legit Santa Barbara taco in the heart of Santa Barbara, look no further than Lilly’s. And at under just $2 for a taco, you are getting serious Bang for your Taco Buck.

The Vitals:
the spot: Corazon Cocina 38 W. Victoria St. Santa Barbara CA 93101
the eats: Cauliflower taco, Ensenada taco, La Corriente taco, Norteño taco, Ceviche – just make sure you sample the menu well
the bucks: $4.95 a taco, Norteño is $8, plan on spending $20 for a decent sample but it could be more if you go all in on ceviche
the full nelson: the ritzy taco experience you expect in Santa Barbara that is also 100% worth it

Corazon Cocina is everything I expected to find in a swank dining hall taco joint: fine dining ingredients prepared with serious technique, beautifully laid out on a tortilla. Pretty tacos come at a pretty price and $8 for single taco makes it hard to stay thrifty, even if that single taco constitutes a small meal.

I could go into detail about that $8 steak taco, how it’s a two hander, loaded with spot on medium rare skirt steak, cheese, beans and guac but what’s more interesting is story of the man behind the stoves: Chef Ramon Velazquez. Ramon grew up in Jalisco Mexico, started out in the restaurant game as a bus boy, was the first non Japanese person to be trained as a sushi chef at a local sushi restaurant and racked up a couple years doing high end Mexican. When people with that kind of background open up a restaurant in a food hall, you’re in for a treat.

Sure it can add up pretty quick at Corazon Cocina but sashimi grade fish in ceviche is a Santa Barbara taco scene game changer. And so is eating cauliflower cooked tempura style that’s coated with a piquant salsa. I forget how good Mexican food can be in vegetarian focused dishes. Chef Velazquez didn’t forget and as long as he is steering the ship at Corazon Cocina, I’m pretty sure I’ll be dropping $20 for my taco fix at Corazon. And it will be worth every penny.