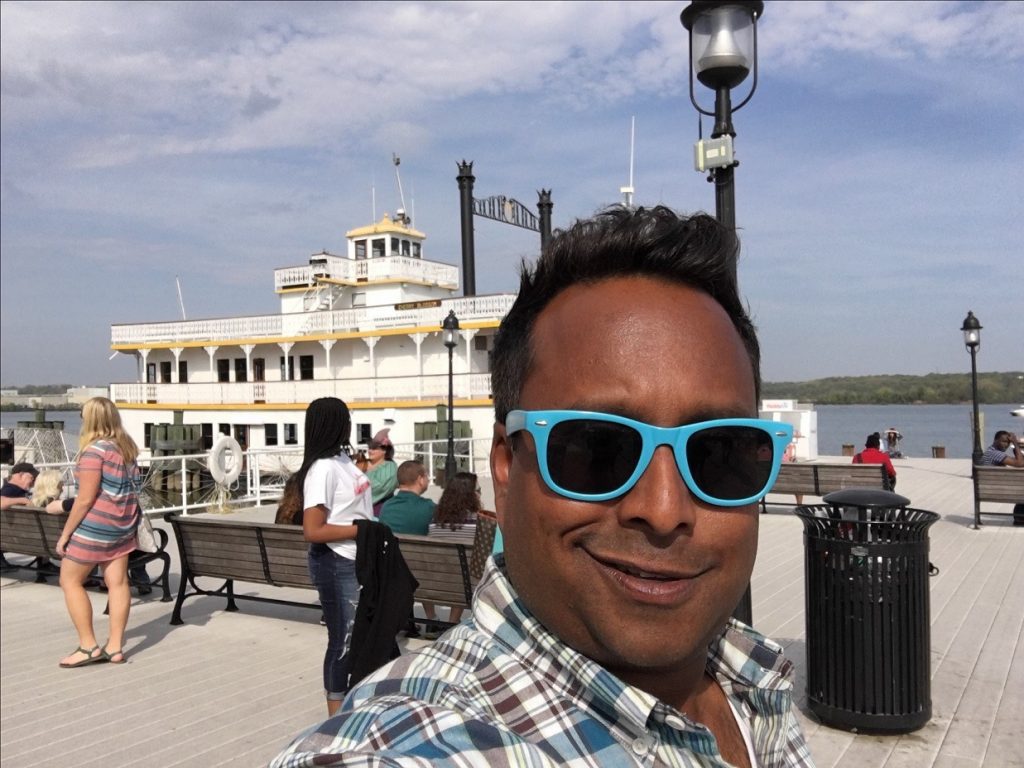 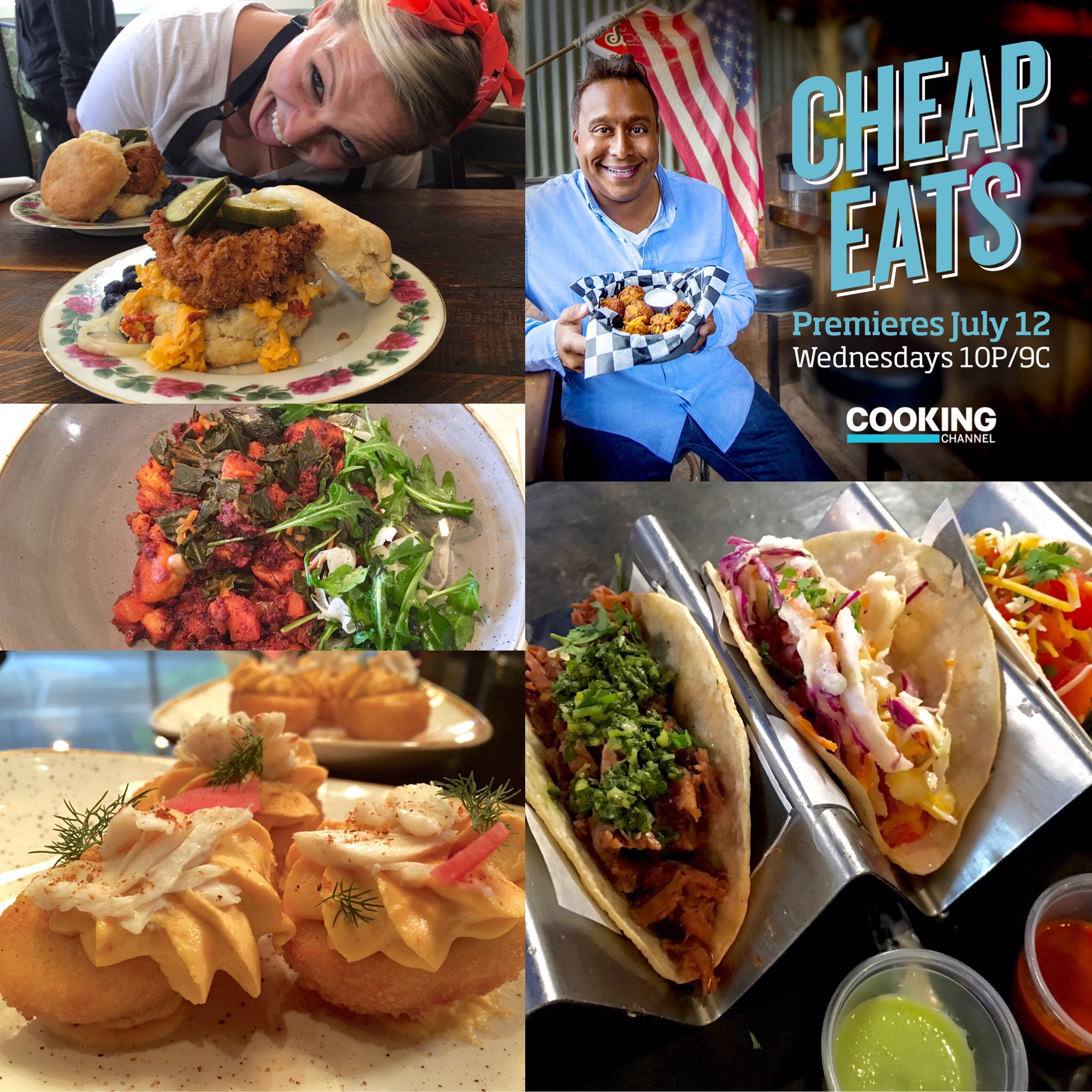 Virginia is for lovers, or so the cool t-shirts say. When I think about how Cheap Eats has hit up the Commonwealth three times in two season, I think the t-shirt could be tweaked to say “Virginia is for Food Lovers”. I love Virginia and I say that thinking about the terrifying events that unfolded in Charlottesville over the weekend. I’m yearning for love and healing while dealing with the fear and anger that has enveloped us with the events of Charlottesville; a city we also visited this season. It seems trivial to want to dive back into the Cheap Eats episode of Alexandria while so much more is happening in Virginia and as a nation, but I am also reminded that food brings people together and I think that is what we need to do right now: come together. So with Cville on my mind and lots of love for my friends there, let’s check out the killer eats and celebrate the great peeps in Cheap Eats Alexandria. 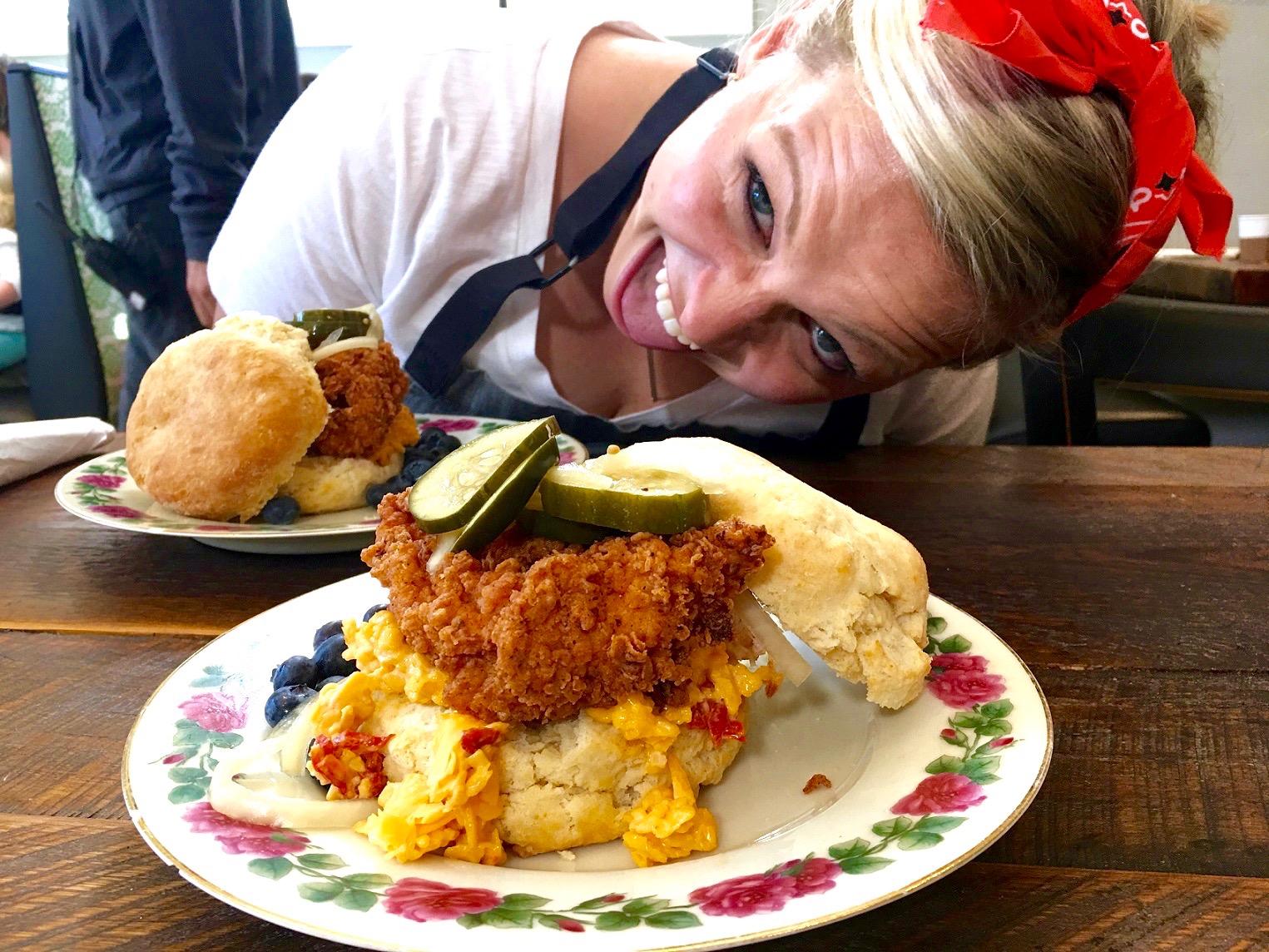 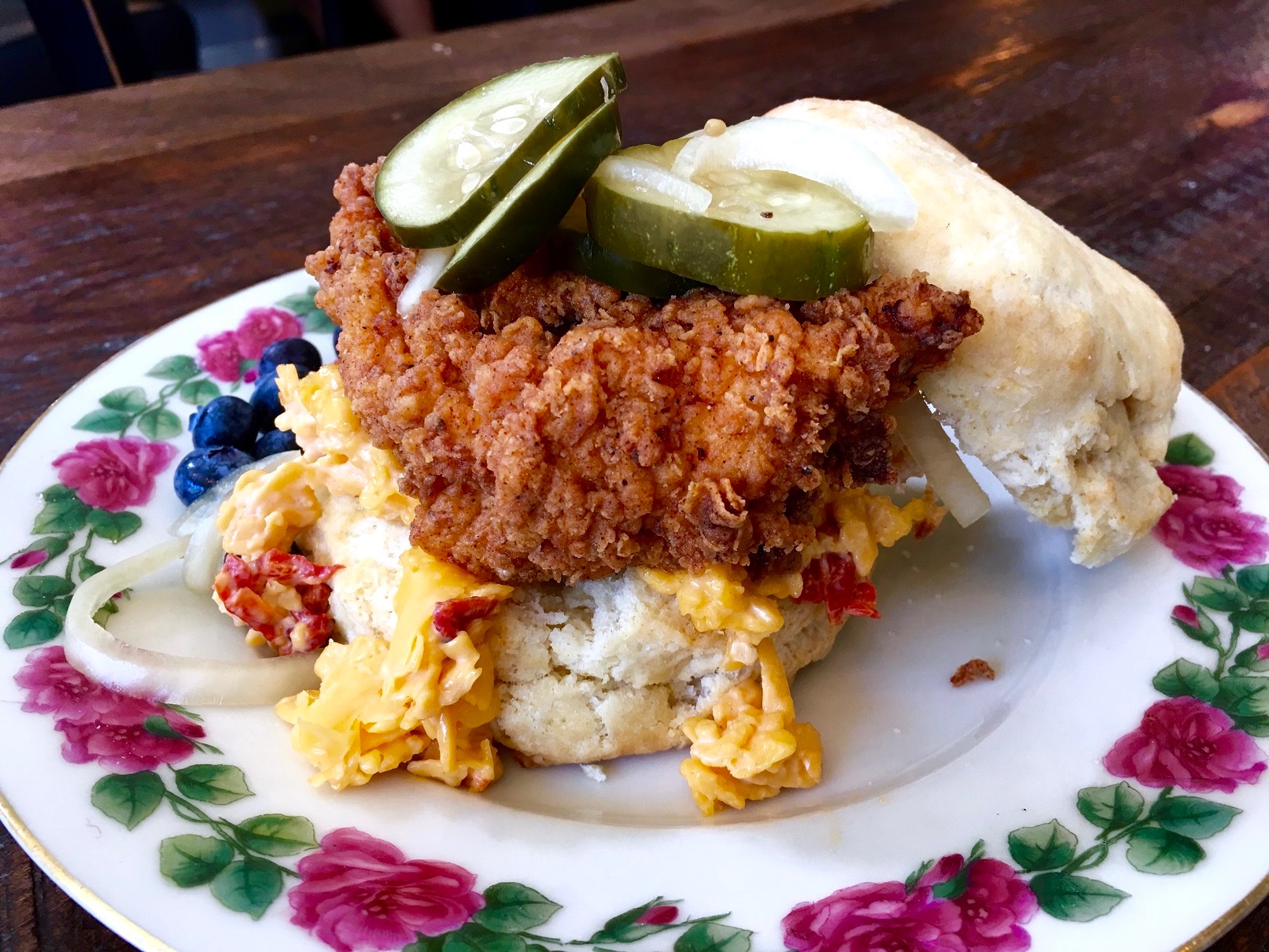 The Vitals:
the spot: Stomping Ground 2309 Mt Vernon Ave, Alexandria, VA 22301
the eats: Classic Chicken
the bucks: $9
the full nelson: as southern as breakfast gets

Fried chicken cooked in lard, on a biscuit, with pimento cheese is about as southern as breakfast can get. Wherever I go, I hear people offer fried chicken confessionals to the tune of Popeye’s, Bojangles or Roscoe’s House of Chicken and Waffles. Well to that I say: give me fried chicken cooked in pork fat. I want my fried chicken dripping of the South while serving as an instant edible reminder that our country has contributed something truly glorious to the Global culinary community: Soul food. But you wouldn’t necessarily know that Stomping Ground would be such a temple devoted to frying chicken. Like the name implies, Stomping Ground is a coffee shop but one that has a serious menu that surprisingly toes the line between guilt ridden(fried chicken) to gluten free(Cold Quinoa porridge). And the surprises carry onto the dinner menu with the likes of fried chicken oysters with za’atar, a Persian herb seasoning. Now Stomping Ground has me thinking they are more than just a place to get my Southern fix on. And then I start to think how is this “coffee shop” managing to pull off all this food? Well here is the thing: Stomping Ground is really just another manifestation of Nicole Jones, the chef and owner. But those titles barely begin to describe her. Like others we have encountered, Nicole found her passion for food after starting another career: she holds a degree in Advertising and Journalism and has worked professionally as a journalist and as a television director. Lucky for me she has a thing for fried chicken, and oh yeah she also went to culinary school and did the whole fine dining thing too. The $9 we spent for the fried chicken biscuit was of course well worth it but still pricey for a Cheap Eats day. But believe me, if you are in Alexandria and you aren’t eating at Stomping Ground at least once a day, you’re losing money. And seriously jeopardizing your fried chicken cooked in lard fix.

Yeah, the whole lard thing really stuck with me here.

Walking through Old Town Alexandria is like walking through a virtual postcard; she radiates history with colonial architecture but functions like a 21st century downtown drag by serving up eateries, shopping and nightlife. Real Estate comes at a premium for this kind of foot traffic so it would make sense from a business point of view to combine a few of those aforementioned ingredients. Meet Mike Cordero, chef and owner of not just Don Taco but a slew of restaurants in the the Northern Virginia area. He has been in the restaurant biz for 40 years which is a testimonial to surviving, but owing seven restaurants with an eighth on the way isn’t surviving, that’s just crushing it. I can’t tell you how much it means to meet someone like Mike and showcase his hard work and success. Mostly because he earned it like few I have met. First he grew up in the Bronx and began to work full time in restaurants at age 13. After working his way up to chef in the kitchens of NYC, he got into the pizza game before selling off his own small chain of restaurants to Sbarro’s. He then opened a fine dining restaurant in the DC/VA area that expanded to five locations before selling four off and then opening the seven restaurants he has now, including Don Taco. Mike has been in the restaurant game so long he knows that survival means staying current with the times and if you haven’t noticed yet, folks are freaking out over tacos and cocktails, so opening Don Taco was inevitable. Also inevitable is me eating tacos, so even though this meal set me back like $12, chef driven tacos like these are worth it. Like eating tapas or engaging in a multiple course tasting menu, ordering a flight of tacos is an opportunity to open up your palate and so I did with the deep fried avocado, which took me out of my meat frenzied zone, but was still as rich and as buttery as it sounds. The shrimp taco was the most surprising because of the piña colada slaw, which only a true chef could come up with and make work so well. I mean who doesn’t love the flavor of coconut with shrimp, and what a more refreshing way to introduce the flavors of coconut then in a sauce by way of coconut milk? But here is the deal my friends: I love lamb and love chimichurri, so the lamb taco was simply a slam dunk and star of the show. Years ago I asked a friend from Tijuana what the best salsa was for carne asada and he replied “chimichurri”. Of course my question came with an expectation of a tomato based/Mexican flavored response, but chimi does indeed rule both as a sauce for steak and salsa for a red meat stuffed taco. There are cheaper tacos to be had but those usually appear after an evening at a bar like Don Taco rather than during. But beyond the bucks, I can’t help but think about Mike when I think about Don Taco. His journey and the wisdom he has gathered over the years wasn’t just a deal I found for lunch when I was in Alexandria, it is why Cheap Eats is a show on TV right now: chefs who are bringing their culinary A game to the people.

Cheap Eats is no stranger to finding deals during Happy Hour but few offer the history and paranormal activity like we found at The Majestic which is also in Old Town Alexandria, almost across the street from Don Taco. If you’re on a Cheap Eats budget you are probably not going to get past the bar and that’s OK because the bar is pretty gorgeous and these bartenders can pour you a mean drink. And you will need one to take off the edge from the ghouls, specters and the occasional wolf man who lurk the halls of The Majestic. Yes friends, there are indeed spirits(not just the ones in the bottle) present here. Also present here are a food that has become quite the trend of late: fancy deviled eggs. I first encountered deviled eggs flirting with crab meat at Jar in Los Angeles, a modern take on the American Steakhouse. The draw of adding fresh crabmeat to deviled eggs is obvious enough but I do think the added bonus of coating the egg whites with panko(Japanese breadcrumbs) and frying them, is just that little extra somethin’ that makes this version really stand out. And at $5 an order, your getting a solid deal. Well maybe too solid. This actually sounds like a deal with the Devil. Ok, now I’m getting spooked and I think it’s time to move on to dinner . . . 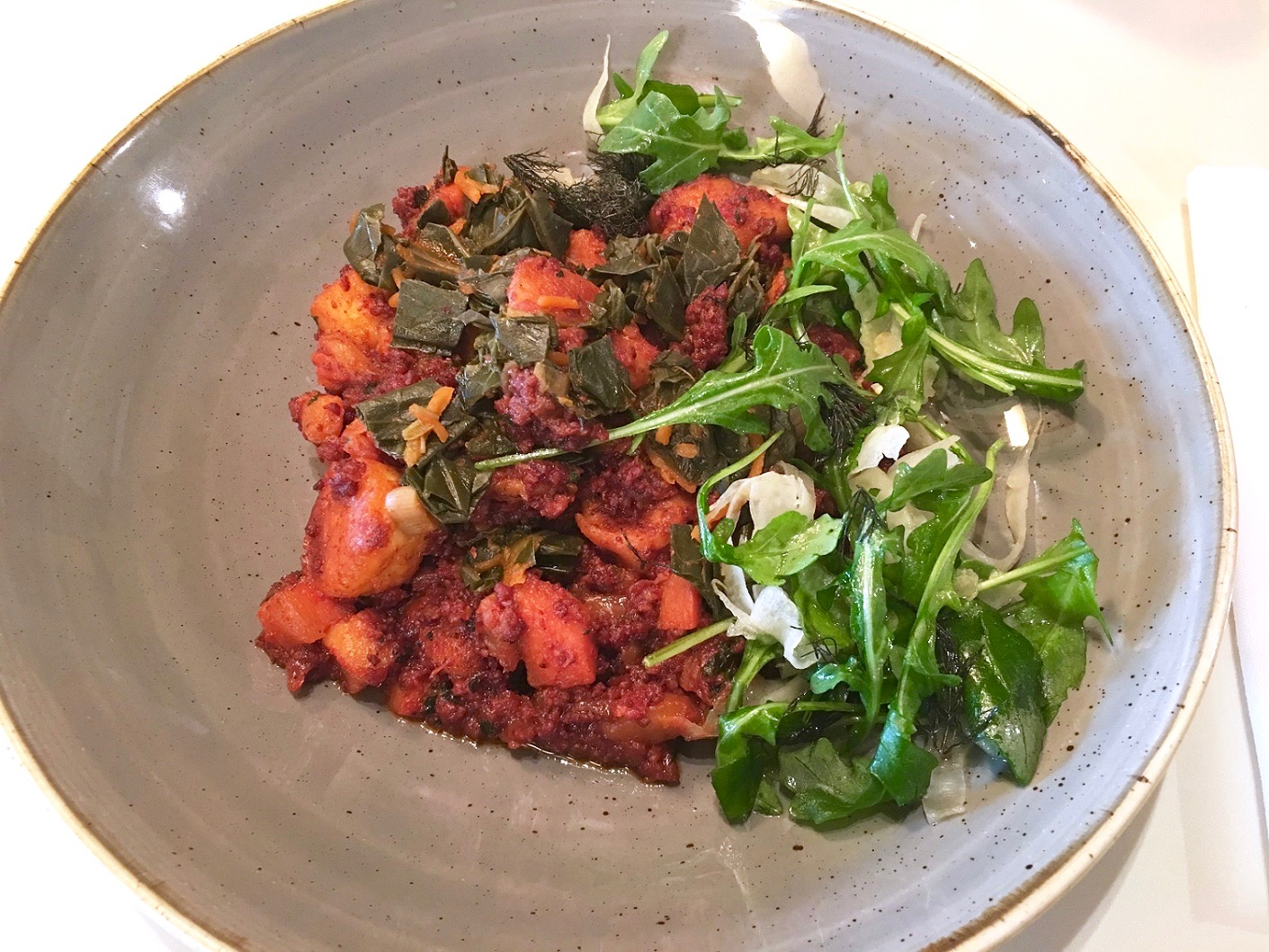 The Vitals:
the spot: Evening Star Cafe 2000 Mt Vernon Ave, Alexandria, VA 22301
the eats: Bacon Bolognese Gnocchi
the bucks: $10
the full nelson: one of the best Cheap Eats dinners EVER

I have a bad habit of ordering a big plate of protein at restaurants for dinner. This is especially erroneous in Italian restaurants that feature hand made pasta with hearty ragús; that labor intensive peasant food that so often steal the show that gives top billing to double cut Veal Chops and Live Maine Lobster. Being on a Cheap Eats budget saves me from such folly and using bacon as the base for a Bolognese keeps the price tag severely in check. From an ingredient stand point, the dish is cheap but the hours that go into making the dish will have your head spin. For a guy like me, it is best to leave gnocchi making to the professionals, and at $10 a plate, I am more than happy to let chef Daniel Hahndorf do so. I love rich foods and assertive flavors and the Bacon Bolognese Gnocchi is certainly that. As rich as as the Parisian gnocchi is, the harmonious umami of tomato paste and red wine provide a significant counterpunch. Add to that hours of braised vegetables and bacon, and my friends you have one lip smacking, hearty as heck dinner. In the big picture of restaurants, when you consider the high caliber chefs working the stoves at Evening Star(Chef Hahndorf is a graduate of Johnson and Wales), the exchange of $23 for duck confit and eggplants grown in Evening Star’s rooftop garden is a fair one. In the big picture of Cheap Eats, $10 for this plate of Bacon Bolognese Gnocchi is one of the best dinner deals we have found. Now if only I could be more disciplined about ignoring those darn double cut veal chops.

And that’s Alexandria folks. Truth be told this charming town is very much a product of Washington DC’s growth but any excuse to add fried chicken into my breakfast mix, makes a trip to these coordinates well worth the gas money. I gotta say after three visits to the Old Commonwealth, one thing is true: Virginia is for food lovers. With that love in mind, I’m sending a little extra love for Alexandria down to Charlottesville too.

Until Wednesday my friends . . .

One response to “Alexandria(VA) in Requiem”