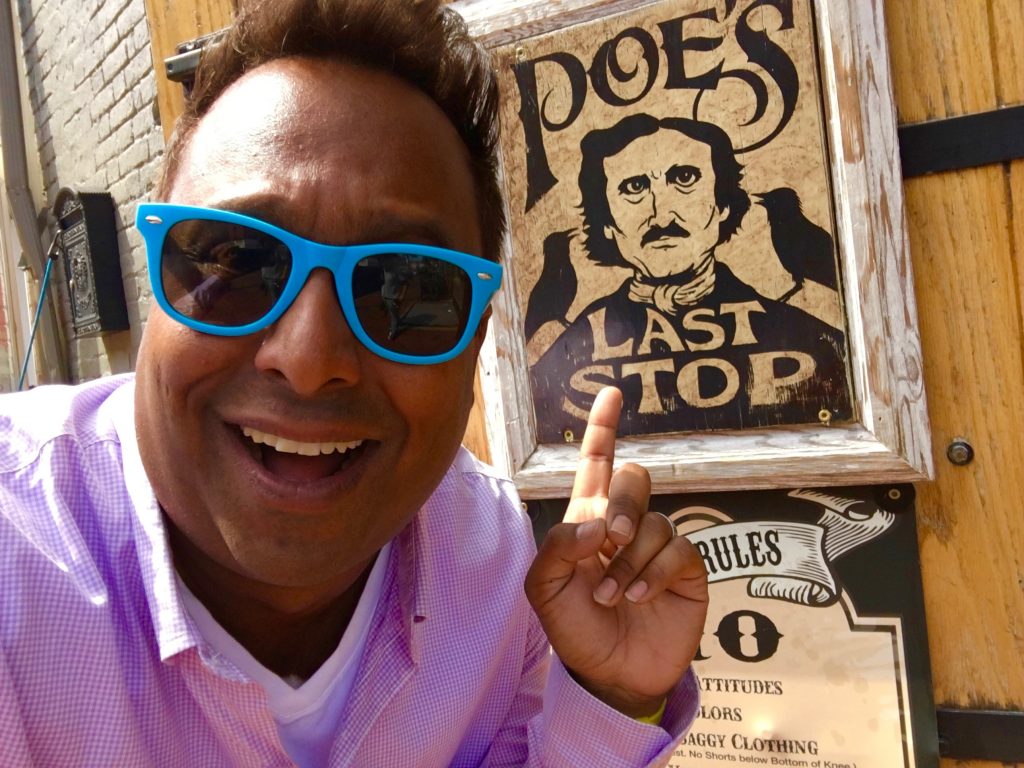 You have heard of it. The City that gave us the Star Spangled Banner, Edgar Allen Poe, and The Wire. Truth be told my perceptions of Charm City came almost entirely from watching hours and hours of David Simon’s epic series. An urban center in decline, the subsequent flight to the County suburbs, and finally the overall size and demographics of Baltimore, reminded me of my hometown of St. Louis. And I guess that’s what always made me hold an appreciation for the place. I also love their accent. Situated in the Mid Atlantic, Maryland is as far north as the American South gets, they say. “Hey Hon, can I get you anything else?” a waitress asked me in a fictitious diner of my Baltimore imagination. Thanks to the Chesapeake, they have a regional cuisine that’s all their own. I even like their baseball team: The Orioles. Camden Yards is a terrific looking stadium. Yeah, we went to another mid sized city in this Season of Cheap Eats. But I would go to Alaska if it meant taking on tapas like this: 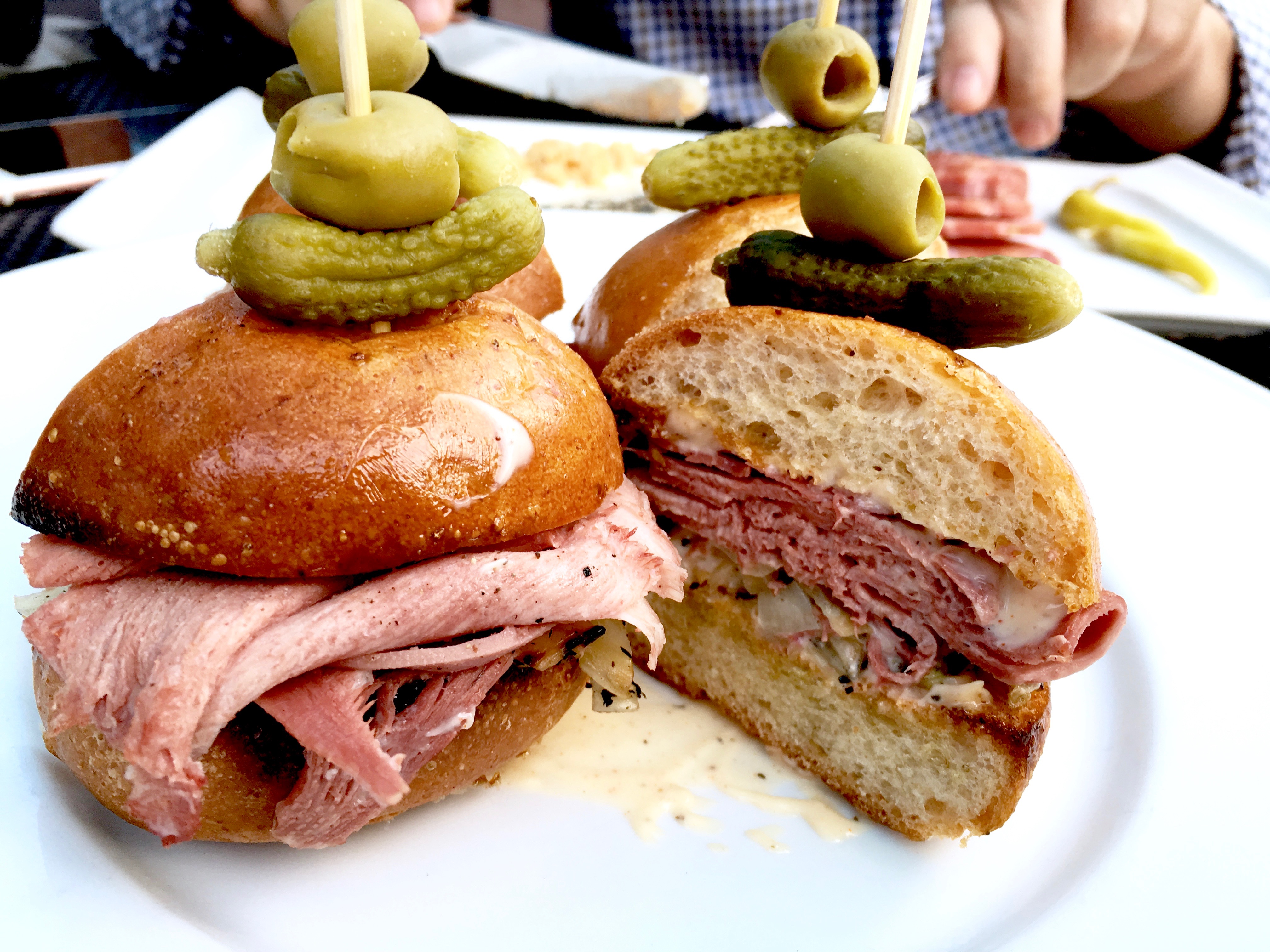 Or should I call them pinxtos. Yes, Cheap Eaters, this ain’t your Spanish grandma’s tapas. This right here is grubbing from Basque country, a region in Spain that likes to think of itself as not Spanish – even to the point of taking up arms. But rest easy for now because A) we are in Baltimore and B) this typically pricey restaurant has an almost criminally cheap deal during Happy Hour. Now let’s get to know La Cuchara. 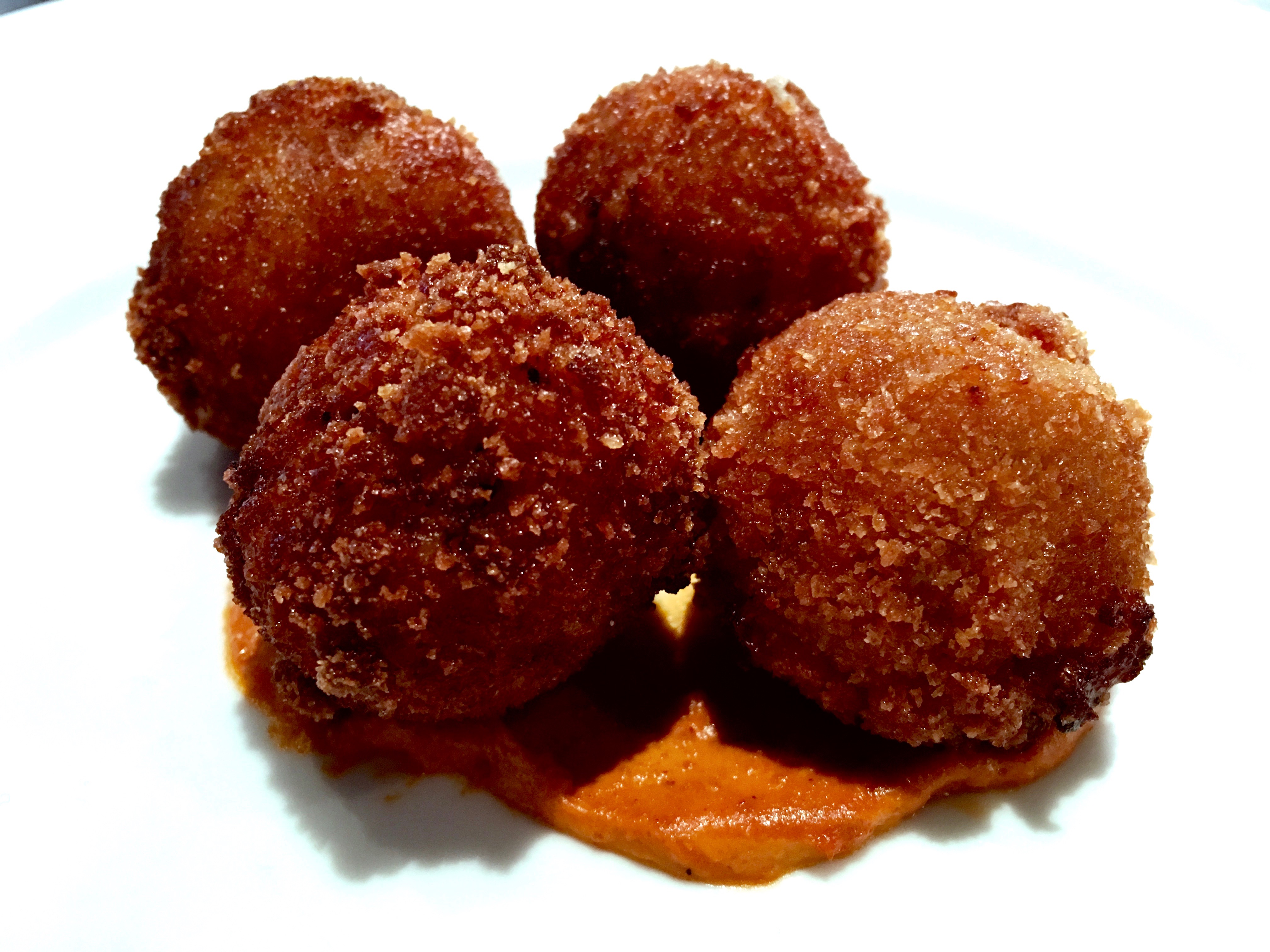 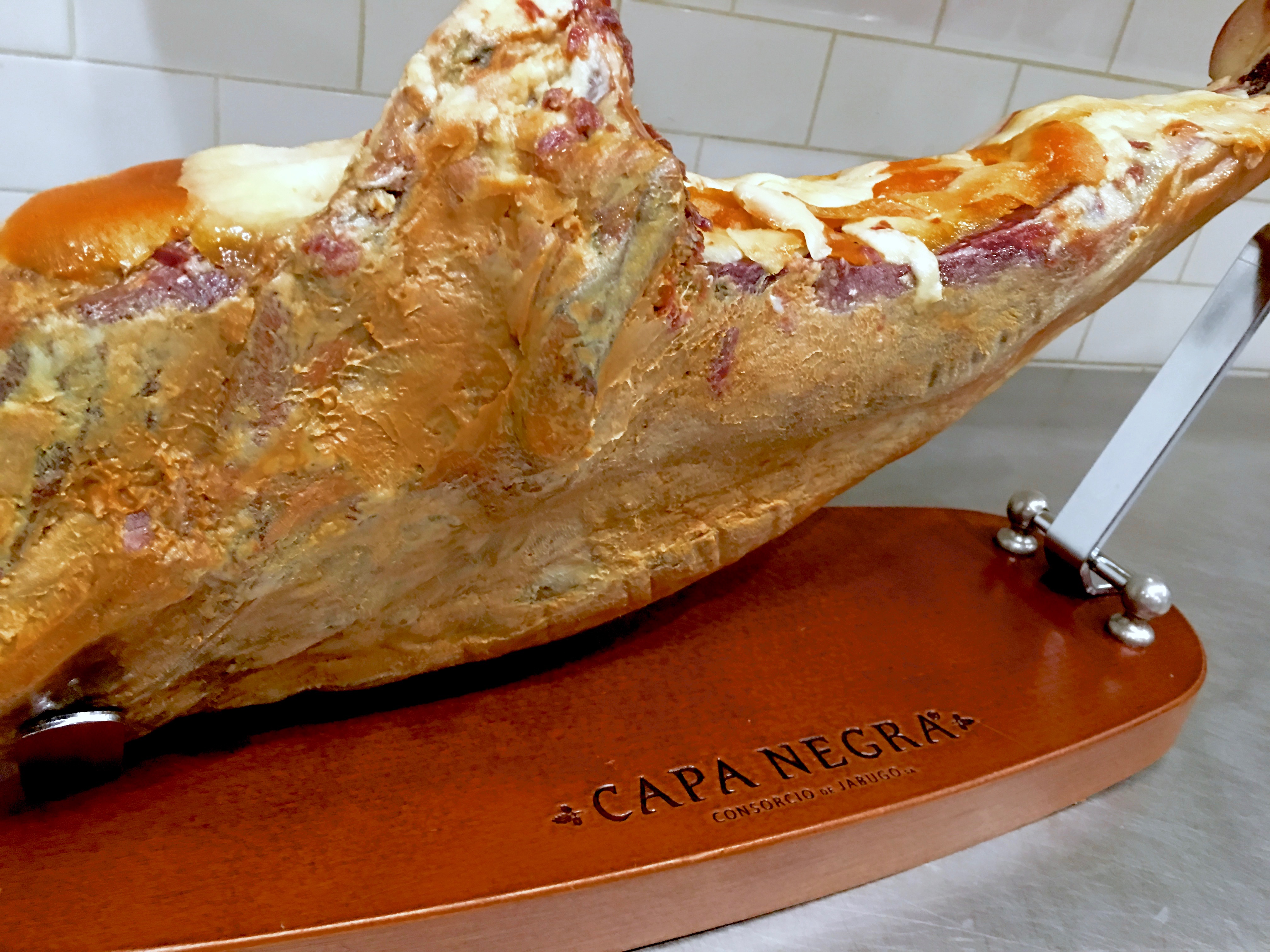 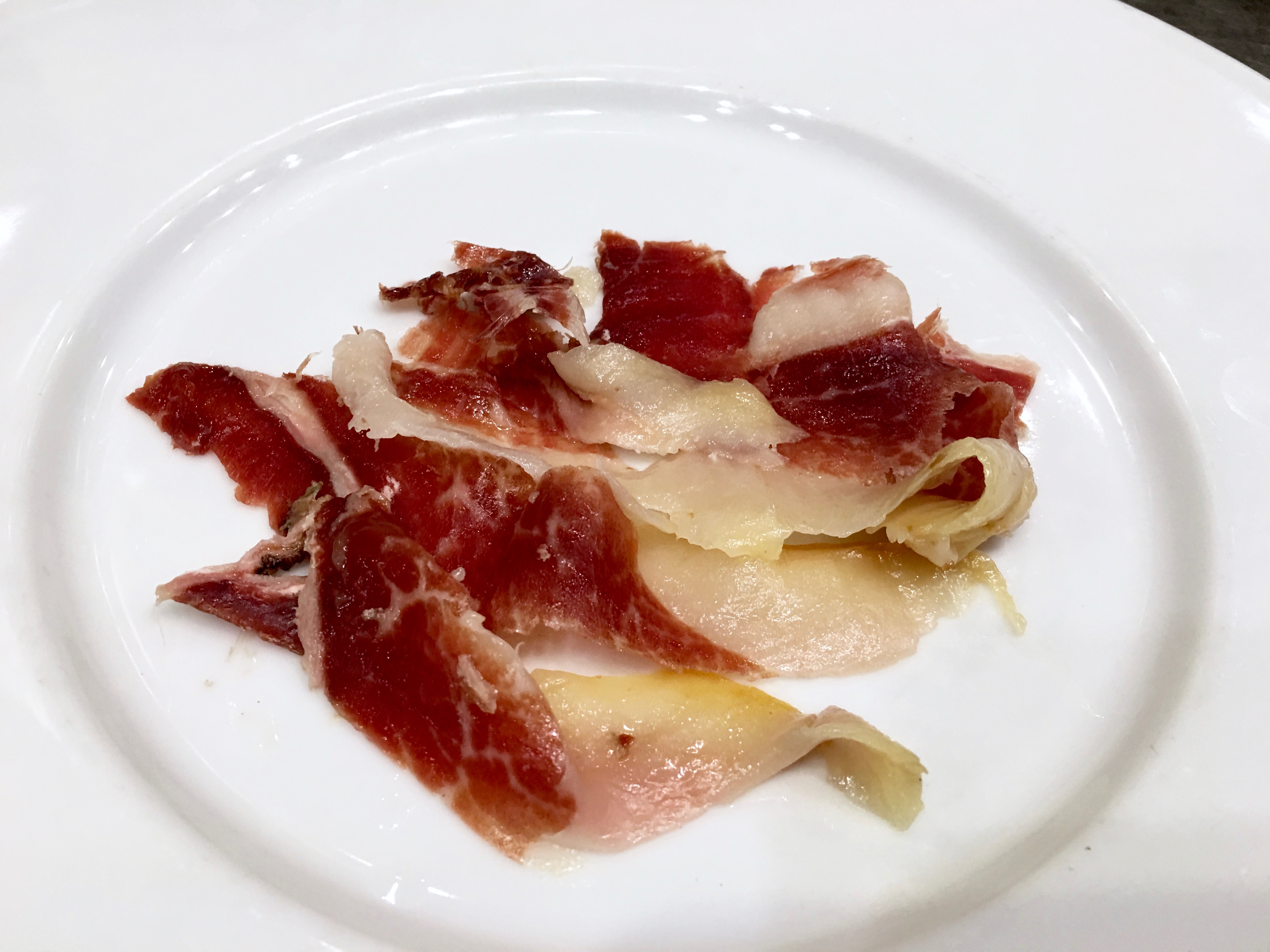 The Vitals:
the spot: La Cuchara 3600 Clipper Mill Rd Baltimore MD 21211
the eats: Jamón croquettes, Veal Tongue Bocadillo, Jamon Iberico de Bellota
the bucks: $2, $4, $15(per serving) respectively. 1/2 price during happy hour
the full nelson:  the best new restaurant in Baltimore is offering you a way to sample their goods for $10 or less.

In the Cheap Eats world, walking into La Cuchara is pretty breathtaking. Open kitchens, as spotless and as shiny as a brand new Sur La Table, just don’t happen that often enough for us. But let’s not kid ourselves either. Happy Hours get you with the alcohol, and coming to La Cuchara with the intention of only dropping a $10 spot means you are just getting an idea of what’s going on. But that idea my friends is certainly a delicious and unique one. The fact is Spanish cooking, let alone Basque cooking, is not as prevalent in America as it should be. I’ve heard DC does a good job of representing thanks to Jose Andres. And Bakersfield, California has been reported to boast a couple Basque restaurants but I sure didn’t see them in my times in St Louis, Los Angeles and now, Austin. So go here knowing you are getting a unique experience.

And now let’s talk about Veal tongue. Yes, those words should rile the squeamish. I suppose I could have braced you a bit better, but look at those marvelously meaty sandwiches at the top. Whatever reservation you might have against tongue – forgo them and order these magnificent sliders, and then tell me they were’t amongst the top 5 tongues you’ve ever put in your mouth. Yeah, I should have braced you for that one too. Moving on, we find those $1 Jamón Croquettes that were features in our episode. Don’t let the price fool you – these were some of the very best foods I tried at the restaurant. Aged cheese and aged ham are wonderful, wonderful things and reasons why Europe has the culinary reputation that that it does. Finally we have the Jamon Iberico. Some of you in the charcuterie know will surely have heard of such a high priced cured ham. Iberico Ham, cousin to Prosciutto, usually starts at $70 a pound and goes up. Parma Prosciutto, some of the best of Italy can be acquired for like $30. So is there a difference? Well, yes, yes there is. Like all expensive things, one must be in a position of comfort to try and enjoy them. Occasionally I am in such a position and I can say that while I wouldn’t knock down a hoagie of this stuff, the flavor experience is deeply complex and intense. Like fine old world wines, the magic here is the transformation of predictable salty and meaty flavors into a rich and nutty flavor, that becomes really pronounced in the fat, with a dash of earthiness to boot. Does it sound like Im getting carried away? Well I should cuz the stuff costs $70 a damn pound. Usually sampling stuff of this quality happens while standing at the deli counter of a fancy supermarket. At La Cuchara, you get to sit down. 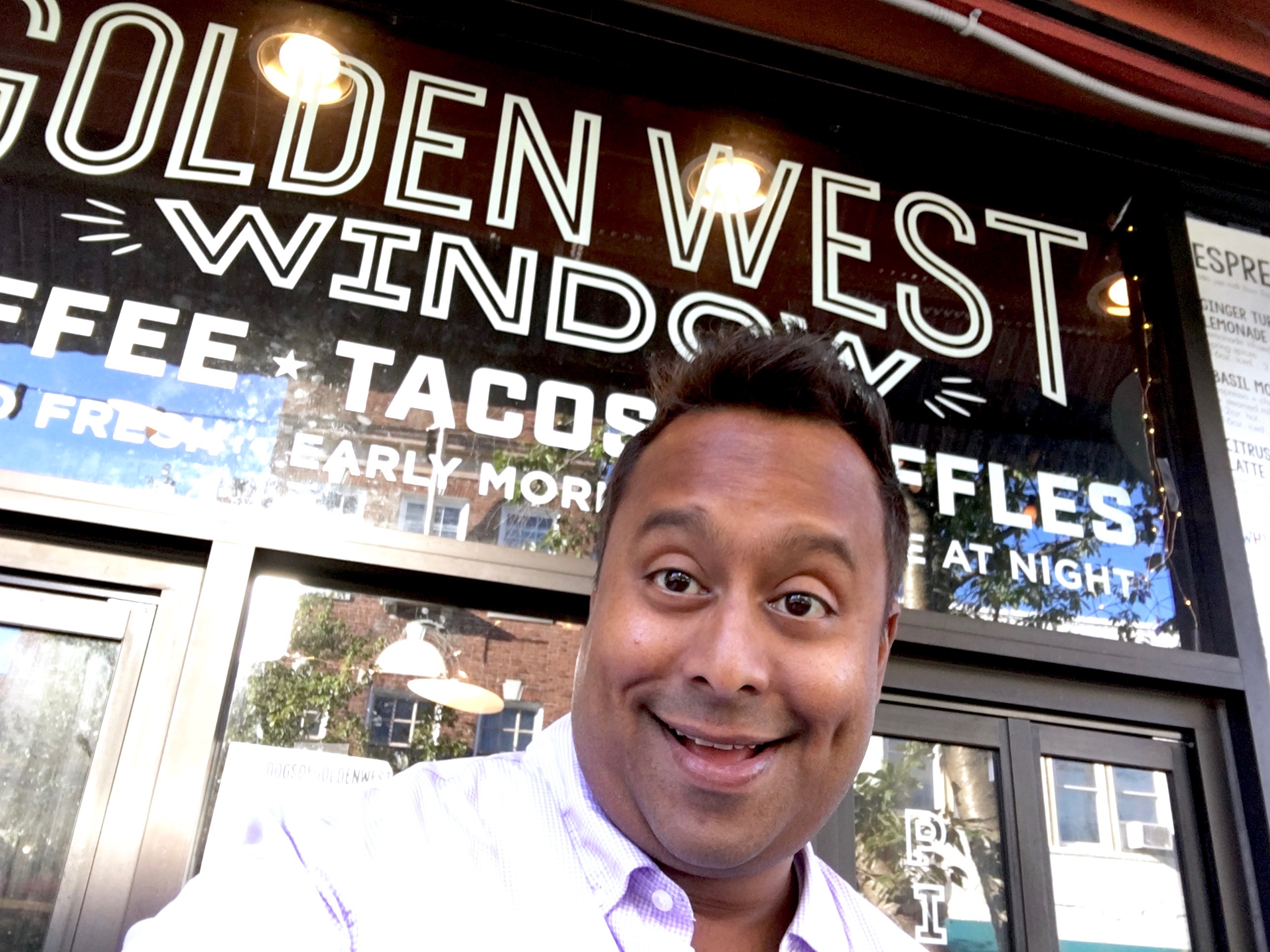 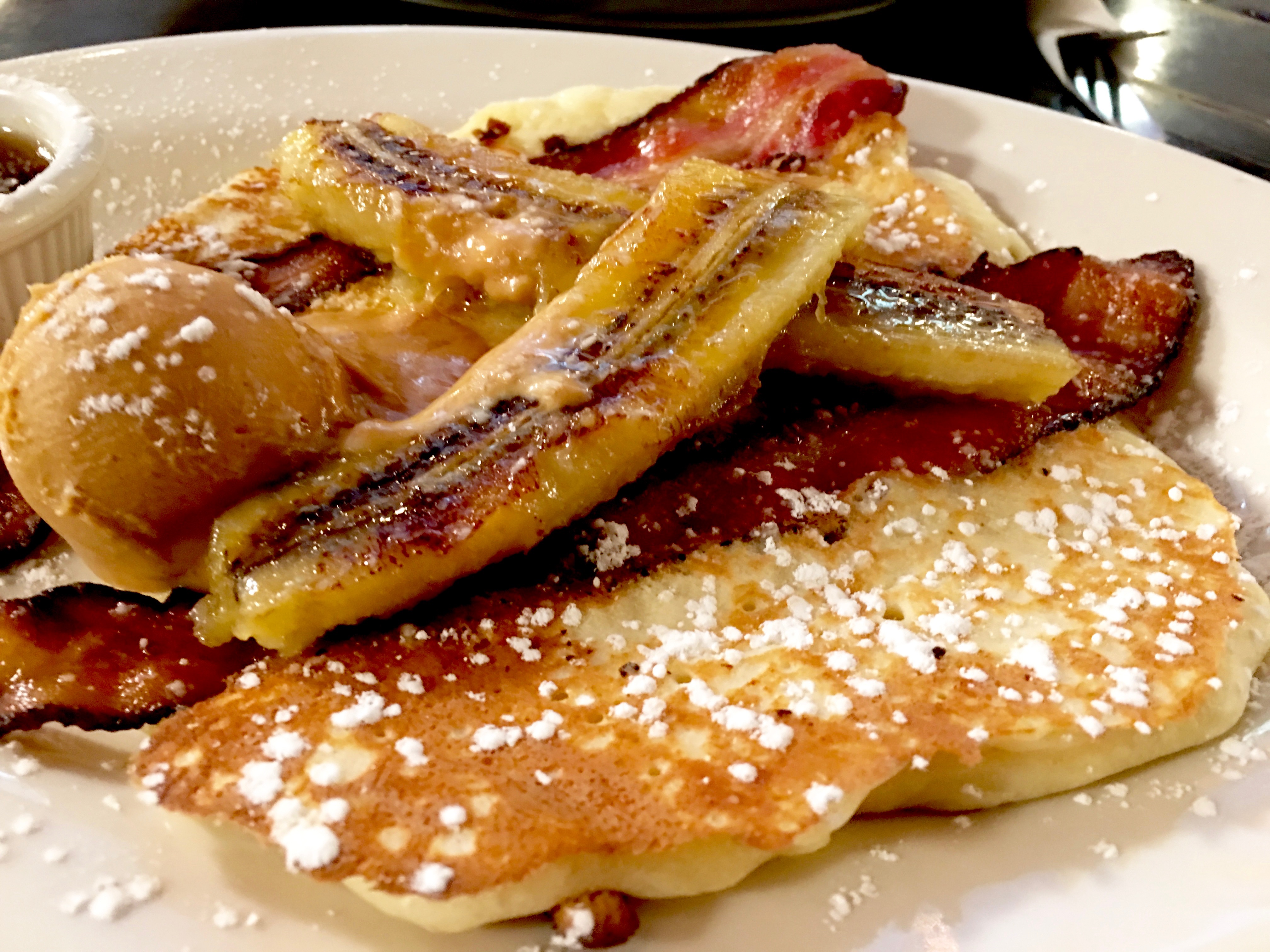 Going out to breakfast should be two things: convenient, and reason enough to not learn how to, or muster up the energy to, flip an egg. Long gone are my days where going out to Sunday breakfast was a weekly ritual. I have my 5 year old, and his love for frozen pancakes served promptly at 7:04am, to thank for that. But if that wasn’t the case, I would certainly put Golden West Cafe on my list of places that are “worth the wait in line for”. Oh did I mention that? They have a serious wait here on, yeah you guessed it: the weekends. Which is why they opened up a take out window that I am standing in front of. While sunny side up eggs might seem questionable to travel, the breakfast burritos Golden West serves up certainly can take a 20 minute car ride home. The menu is just short of expansive and if you crave rich pancakes, then look no further than the Elvis, or on a Cheap Eats budget, the Lisa Marie. Peanut butter and bacon in a pancake tastes exactly like it sounds so order confident in your impending contentment. I mean if it’s good enough for the King of Rock n Roll, it’s good enough for you to start your day. 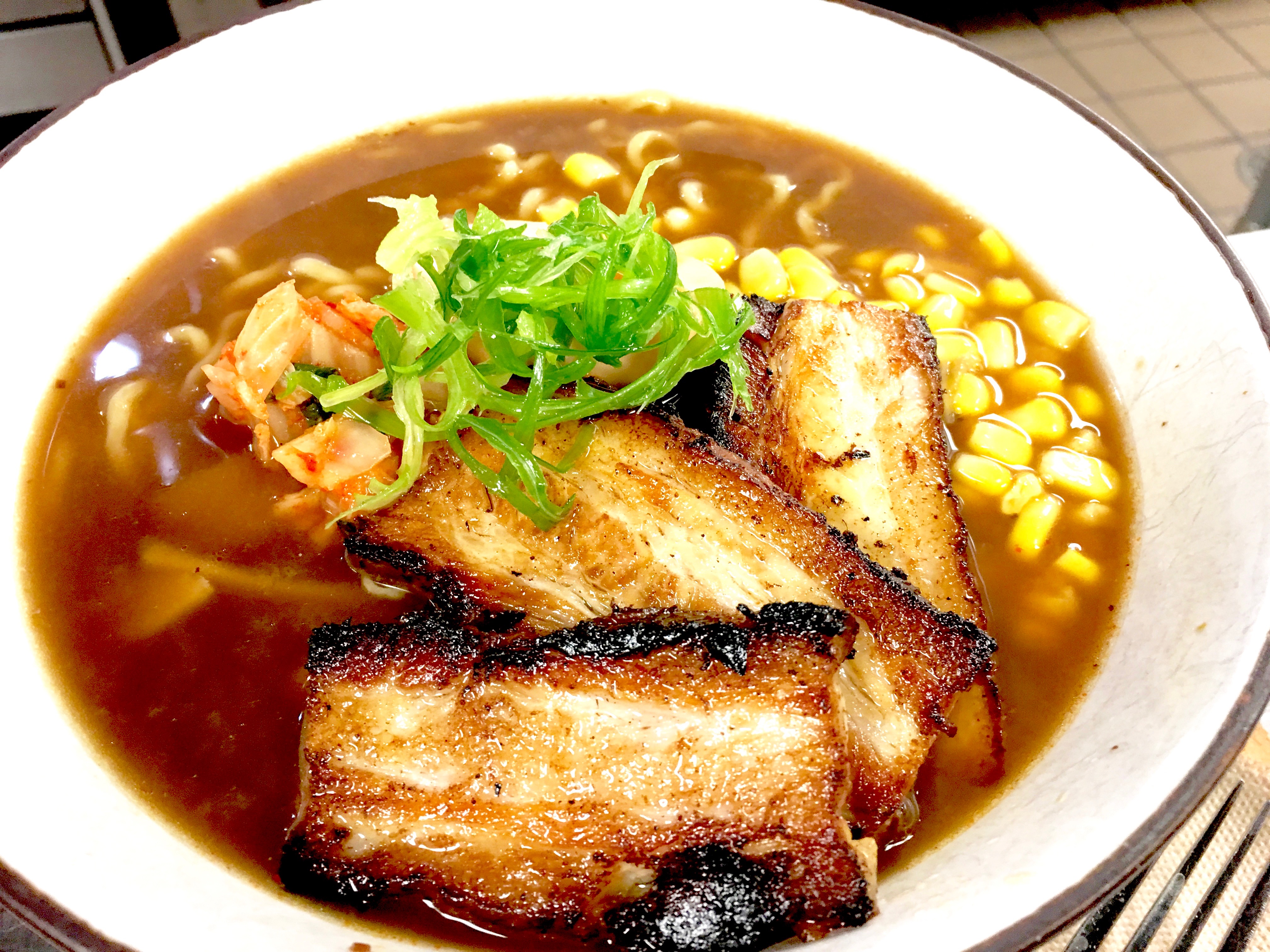 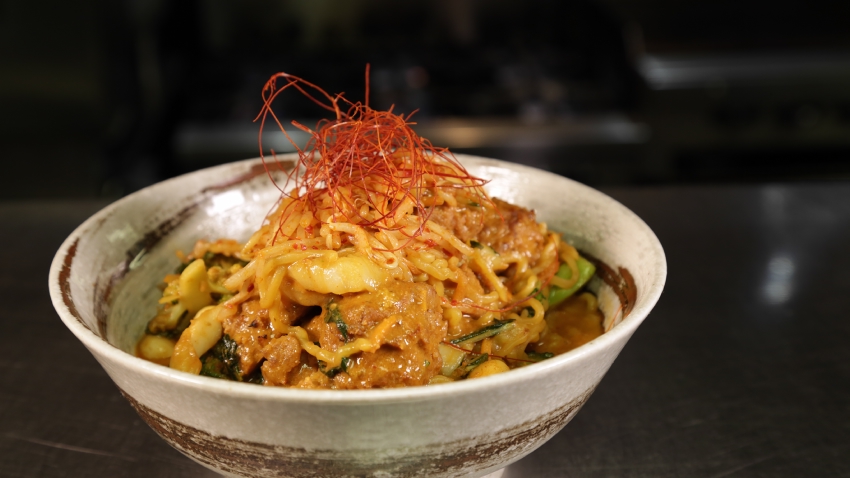 Even for the adventurous Cheap Eater, few of us have dined on Korean food beyond the obligatory all you can eat Korean BBQ experience. And there is good reason for that: soy sauce and sugar make for an incredibly addictive marinade. And who doesn’t like cooking a little meat on a grill? For the uninitiated I will elaborate: Korean BBQ involves sitting at a table with a grill in the middle and raw meat is presented after ordering, left for the diner to cook. But there is much more to the cuisine than that and pitchers of Hite beer. I will say that Korean cooking favors strong flavors – kimchi anyone? So I found Dooby’s, a contemporary Korean cafe started by Phil Han, son of Korean immigrants, to be, well, more reserved in flavor. That’s not to say this stuff is bland. There is plenty of gochujong, a spicy garlicky paste made from sticky rice, chili peppers and fermented soybeans that Han refers to as “G sauce”, to go around. And that just right there sums it up. As we move well into the 21st century, a new second generation of immigrant’s children from countries such as Korea, Vietnam and Bangladesh will have become a part of the Great American Melting Pot. And soon stuff like “G-sauce” will become as common place as marinara. In the meantime you may be tempted by more familiar items like burgers and french toast, but definitely give one of the ramens, or the dish we featured, the spicy pork meatballs a try. It may be a Korean joint, but the size of these noodle dishes screams Chinese family style, so share or plan on having serious leftovers. I took a decent share of my noodles home. And ended up just eating them later that night in my hotel room. I suppose I should ask Phil what the Korean word is for “gluttony”. 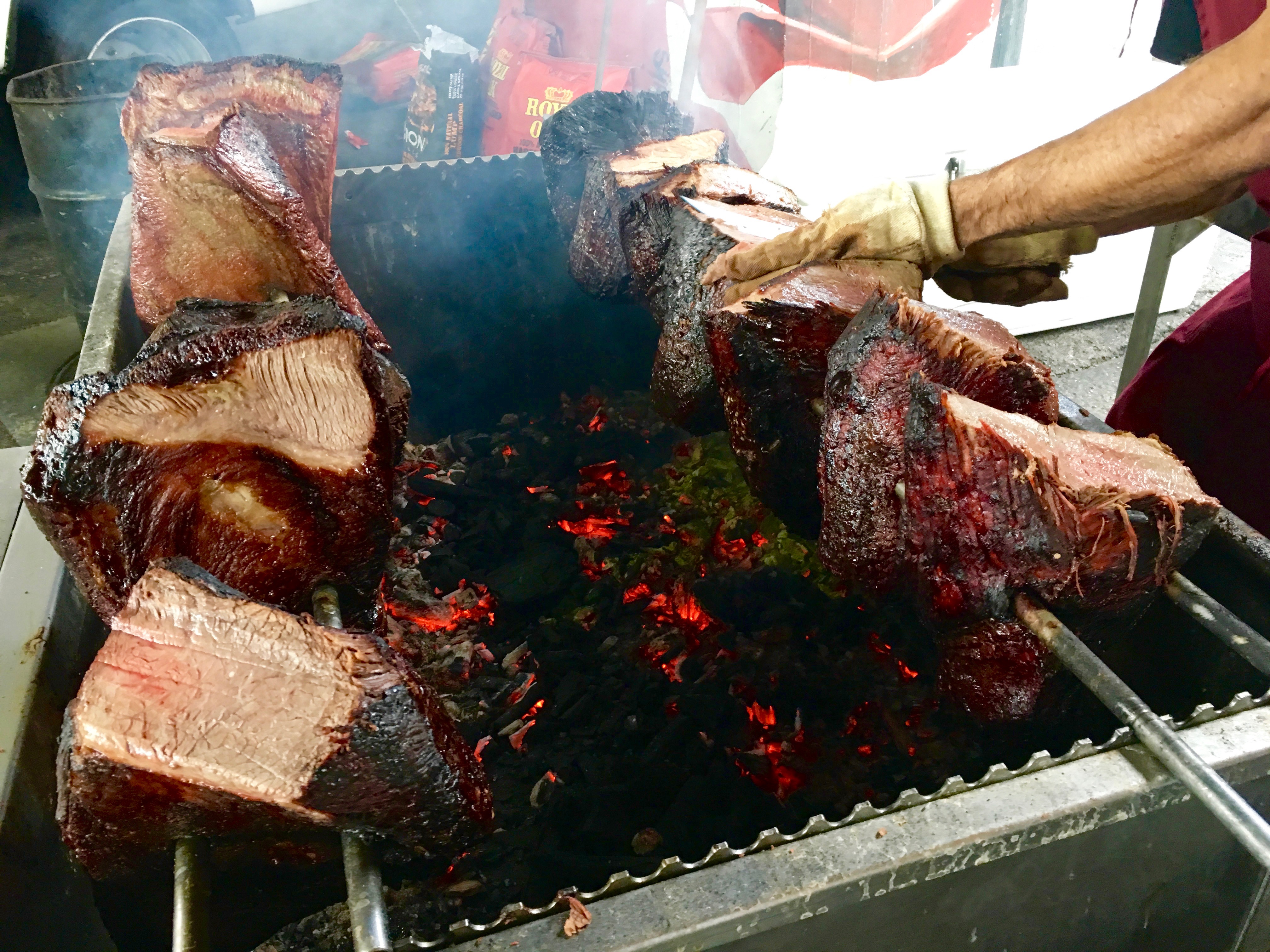 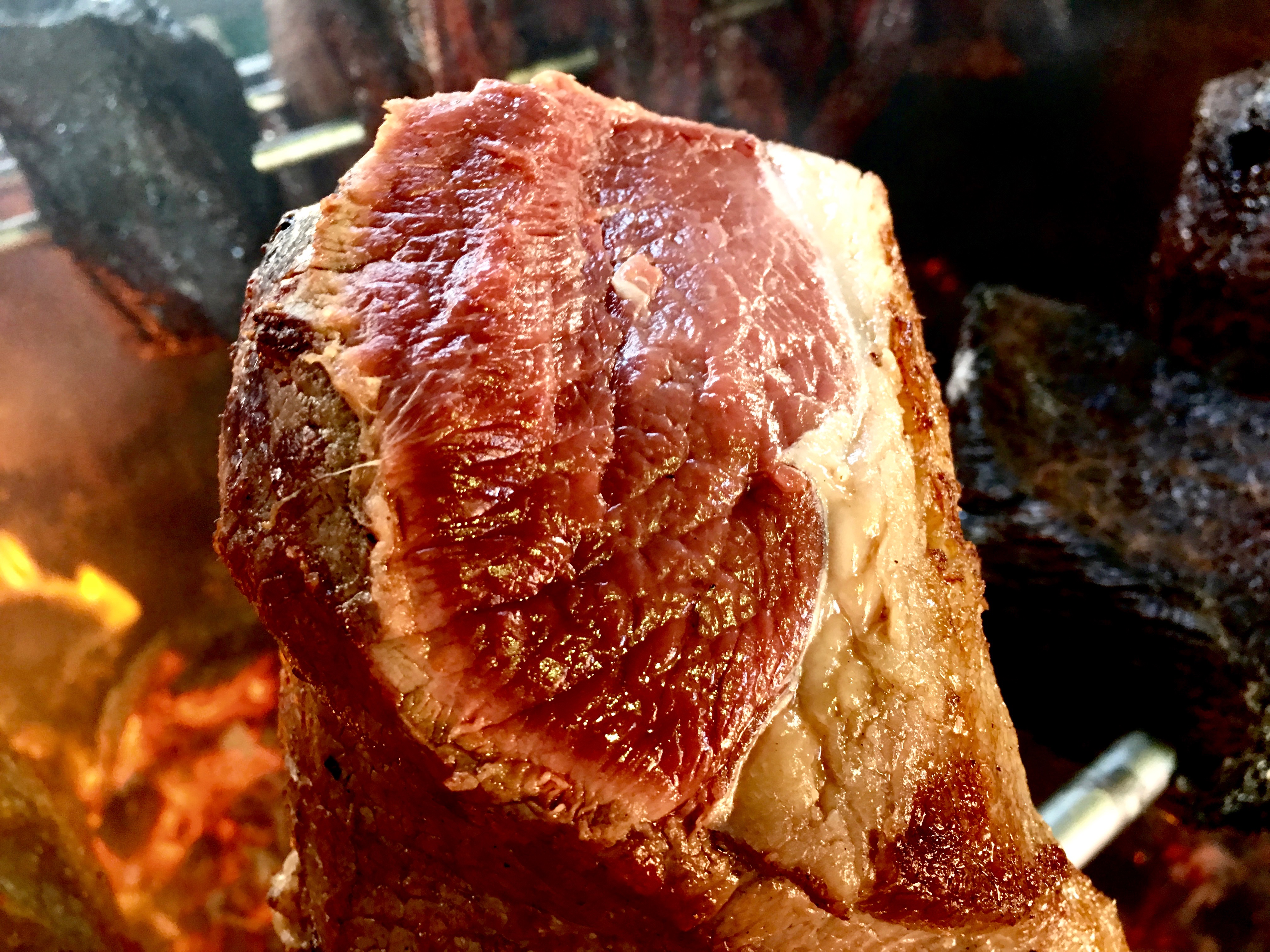 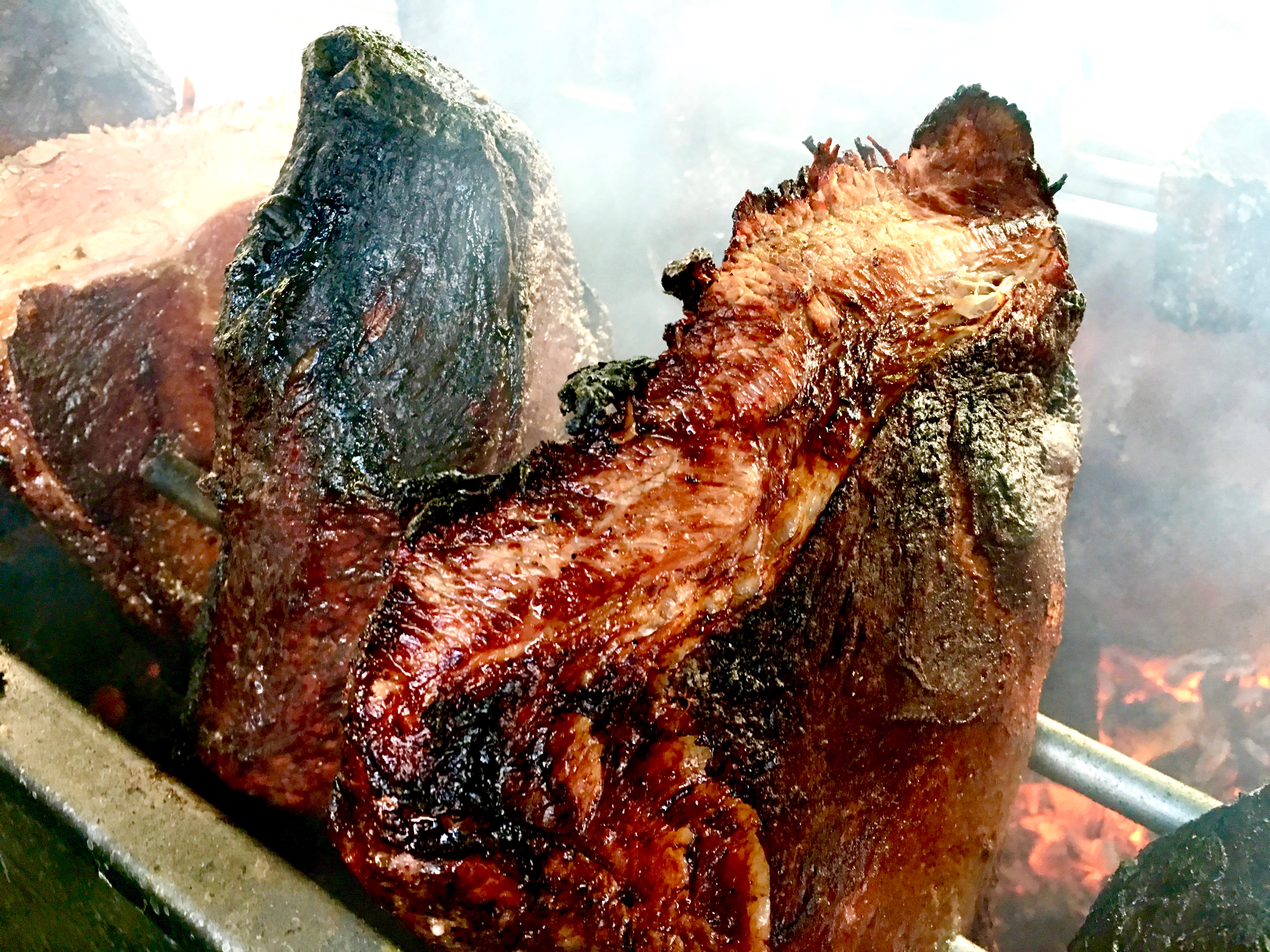 Yes, Beef Barons is exactly as awesome as it looks. Part of my eating doctrine to embrace local foods and traditions; which makes Maryland Pit Beef a damn easy sell. There is something just so primal to Pit Beef. Like barbecue, I believe it is an act of social ritual as it is eating lunch. In the Cheap Eats world it’s always nice to spend $7 and have a meaty sandwich but seriously, the bread is pretty much a formality. You could just eat the slices of meat all plain Jane and be very very satisfied. The occasional dabbing of a rag soaked in salted water is enough seasoning here. Smoke, beef and that hint of salt create one of the most interesting simple foods I have ever eaten. And it’s just fun to be around. While the crab cake get most of the glory, Pit Beef is the true Cheap Eaters Baltimore staple food.

And that’s just a sample of what’s happening in Baltimore. The proximity to larger East Coast cities mean potential traffic for vacationing diners as well as Chefs looking to perhaps find a new town to make their culinary impact. Summers here showcase the great produce of the region. A city of this size means a decent ethnic eats scene. There is the bounty of the Chesapeake Bay and those magnificent spinning slabs of Angus pit beef that could make a homesick Brazilian just a little less so. It’s a city that some may have an impression of without ever stepping a foot there. Well I can tell you, I have done so twice, and I know there is much more to know about B-Mo.

One response to “Baltimore in Requiem”