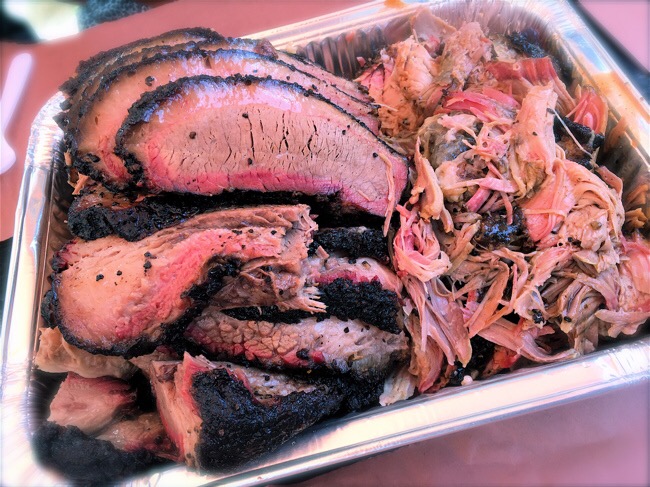 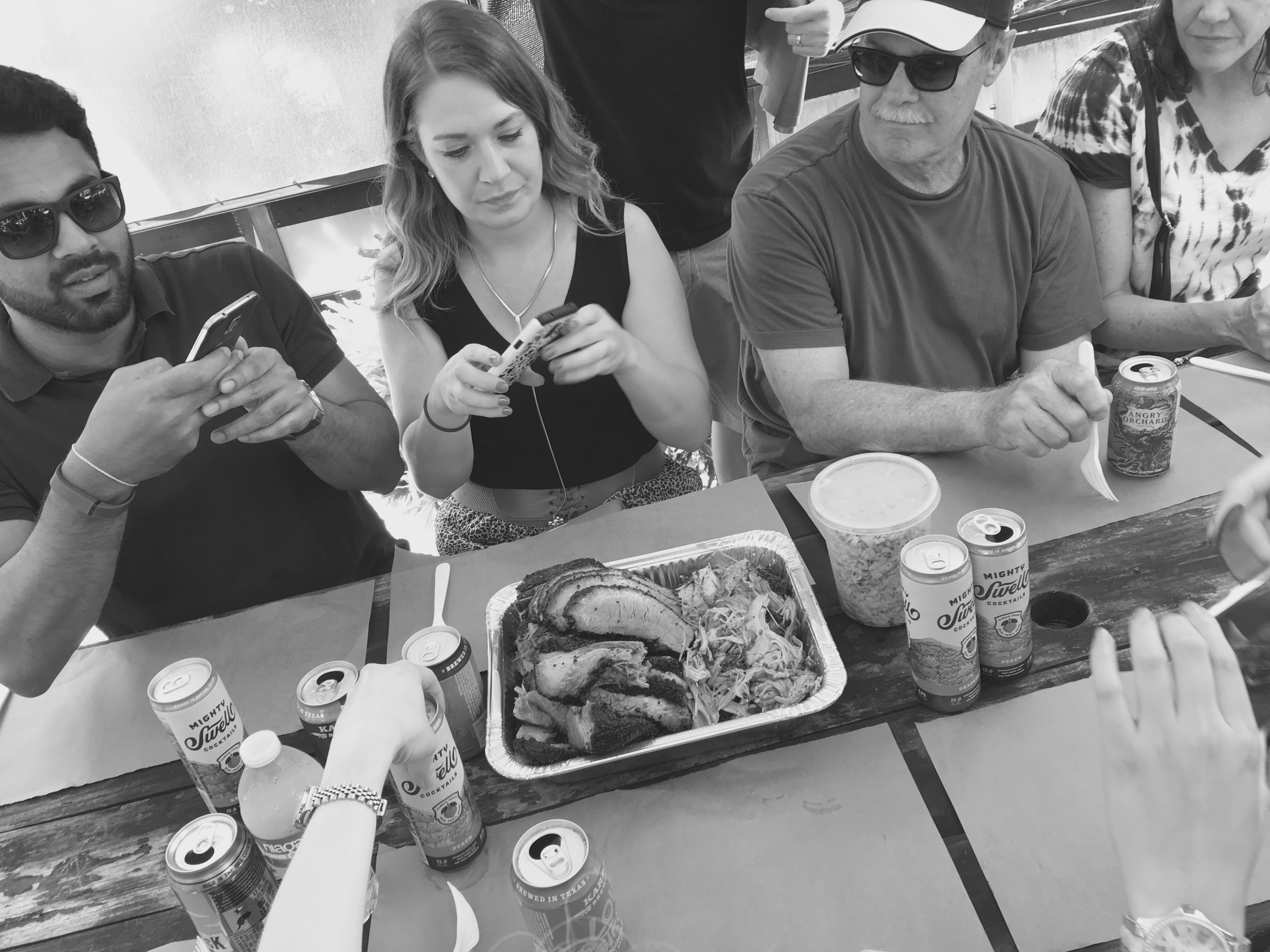 It often starts in a backyard where a Dad dumps lighter fluid over a pyramid of charcoal briquettes. Hotdogs stand at the ready to be charred. You inevitably eat outside. For a moment, the modern suburban American is somehow a little more connected to nature and the primal beginnings of human civilization. Eating around the fire is both ancient ritual and modern day American food tradition. In either case, while the scenario is fun, eating well from fire is often an art best left to the experts. Enter American Barbecue, the Central Texas smoked meat tradition, and our current food renaissance’s obsession with the pit master obsessed with brisket.  There is just nothing quite like it. Sure, Memphis fanatics will talk up the supremacy of sugar rubbed ribs and Carolina pulled pork enthusiasts will mock anything that isn’t porcine focused but man who doesn’t love beef in America? Further, who doesn’t love the pure satisfaction of beef kissed with smoke, salt and pepper? There is plenty of room on my table for all kinds of Barbecue and not just our domestic fare either, but I happily now count myself among the ranks of the brisket obsessed and I can thank living in Austin for that. There has been a renaissance, wait I used that word already, well F*** it, it is what it is, there has been a Renaissance in Central Texas Barbecue that has stretched out as far west as Compton CA and as far east as the Big Apple. But today we will focus on Central Texas Brisket found right here in Central Texas. So here we go – 5 Austin picks where you will find some Bang for your Brisket Buck. 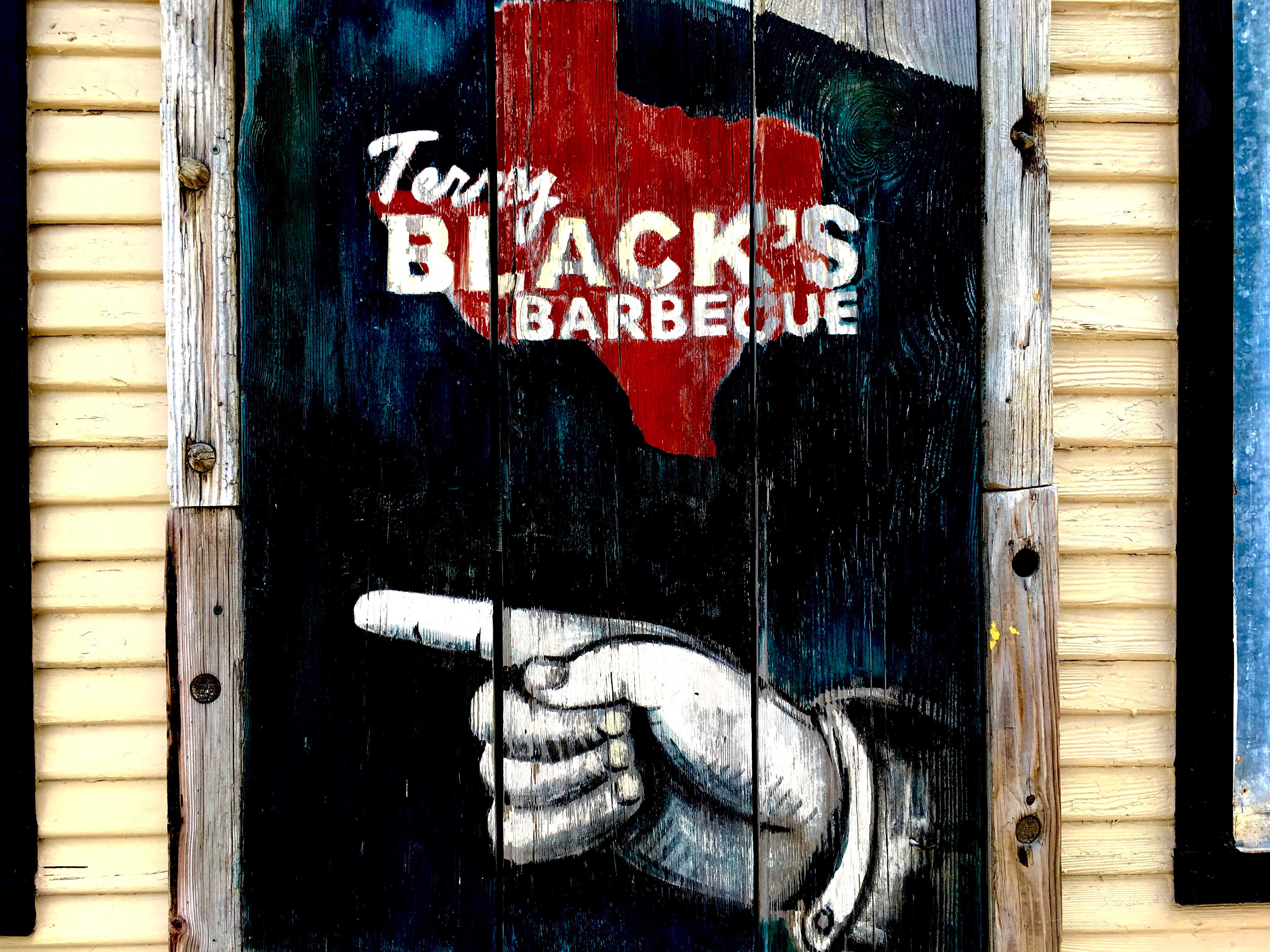 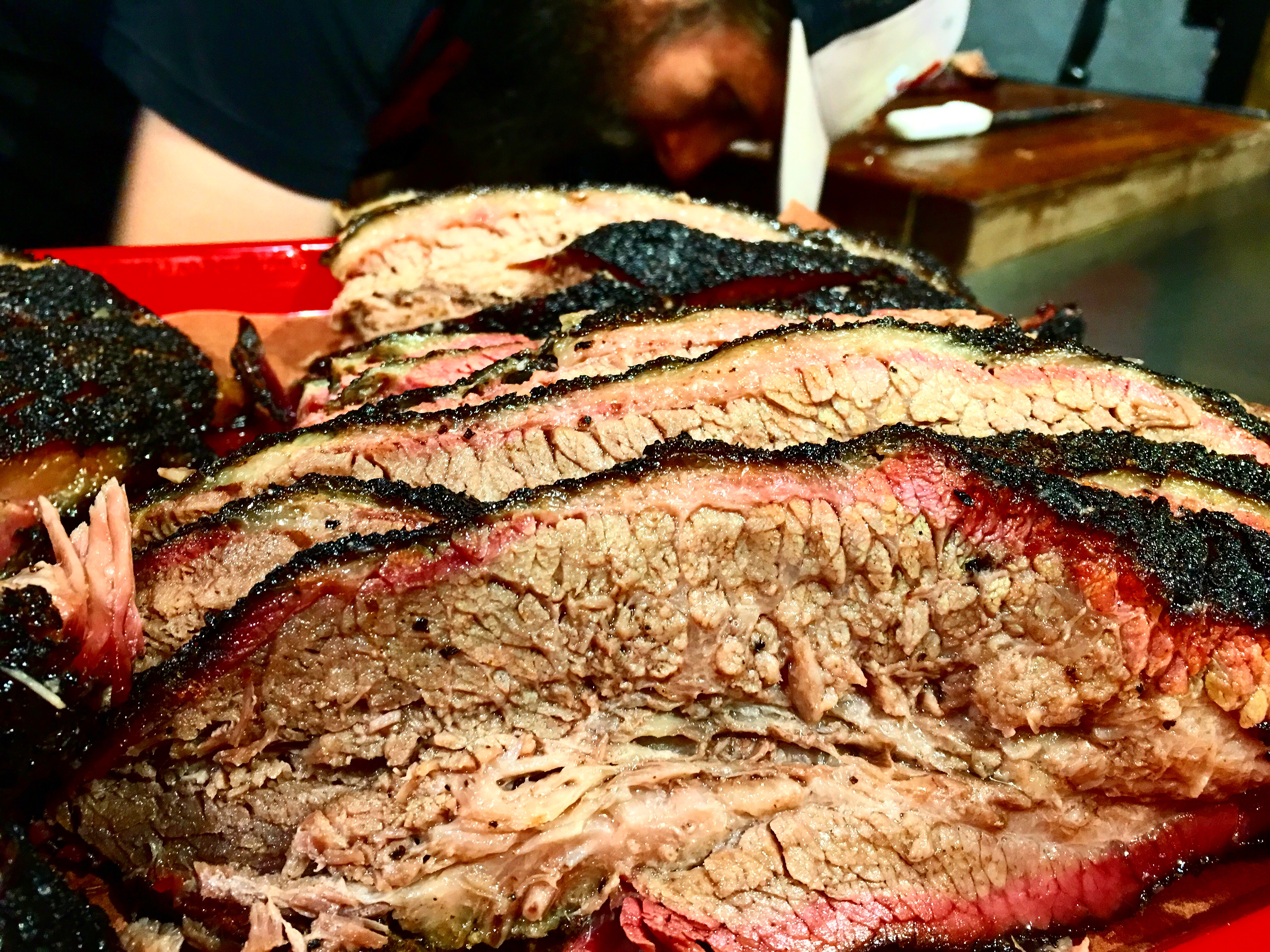 The Vitals:
the spot: Terry Black’s Barbecue 1003 Barton Springs Road Austin Texas 78704
the eats:  brisket, jalapeño and cheddar sausage
the bucks: $18/lb, 13/lb – a decent plate of both will set you back around $12
the full nelson:  Young guns slinging bbq with an old school bbq family name

I’ve never met Michael and Mark Black, the twin brothers who started Terry Black’s Barbecue but in my vivid imagination I picture them as identical twins like Tomax and Xamot from GiJoe. You know, the guys who worked for Cobra who could finish each other’s sentences and if one brother got punched, the other would feel the pain. Not everyone likes Cobra, or GiJoe for that matter, but the same could be said about Terry Black’s. After all, the original Black’s BBQ in Lockhart almost always gets a mention when someone brings up Terry Black’s, and a Lockhart affiliate(Black’s BBQ) is just up the street on Guadalupe. They don’t tout the BBQ trailer mystique like Micklethwait or La Barbecue as their restaurant is shockingly spacious and air conditioned. So, why are they on my list? Well first off, the jalapeño and cheddar sausage may well be the best sausage in town. And because if you catch em right, they have been known to serve up a brisket that stands tall amongst the finest in ATX. Like many, I wasn’t blow away on my first visit but like many, you return, and you begin to appreciate how evenly marbled the fatty brisket here is. Though many(myself included) believe that fatty brisket is the ONLY way to go, some people are put off by fat on their plate. Lean can so easily dry out if not consumed within moments from the slicer and so a happy medium, call it Fatty Lite, is essential in showing off everything a well smoked brisket can be. In short, Terry Black’s fatty brisket is a slice of bovine heaven for everyone and you get to have the best sausage in Austin as a side. 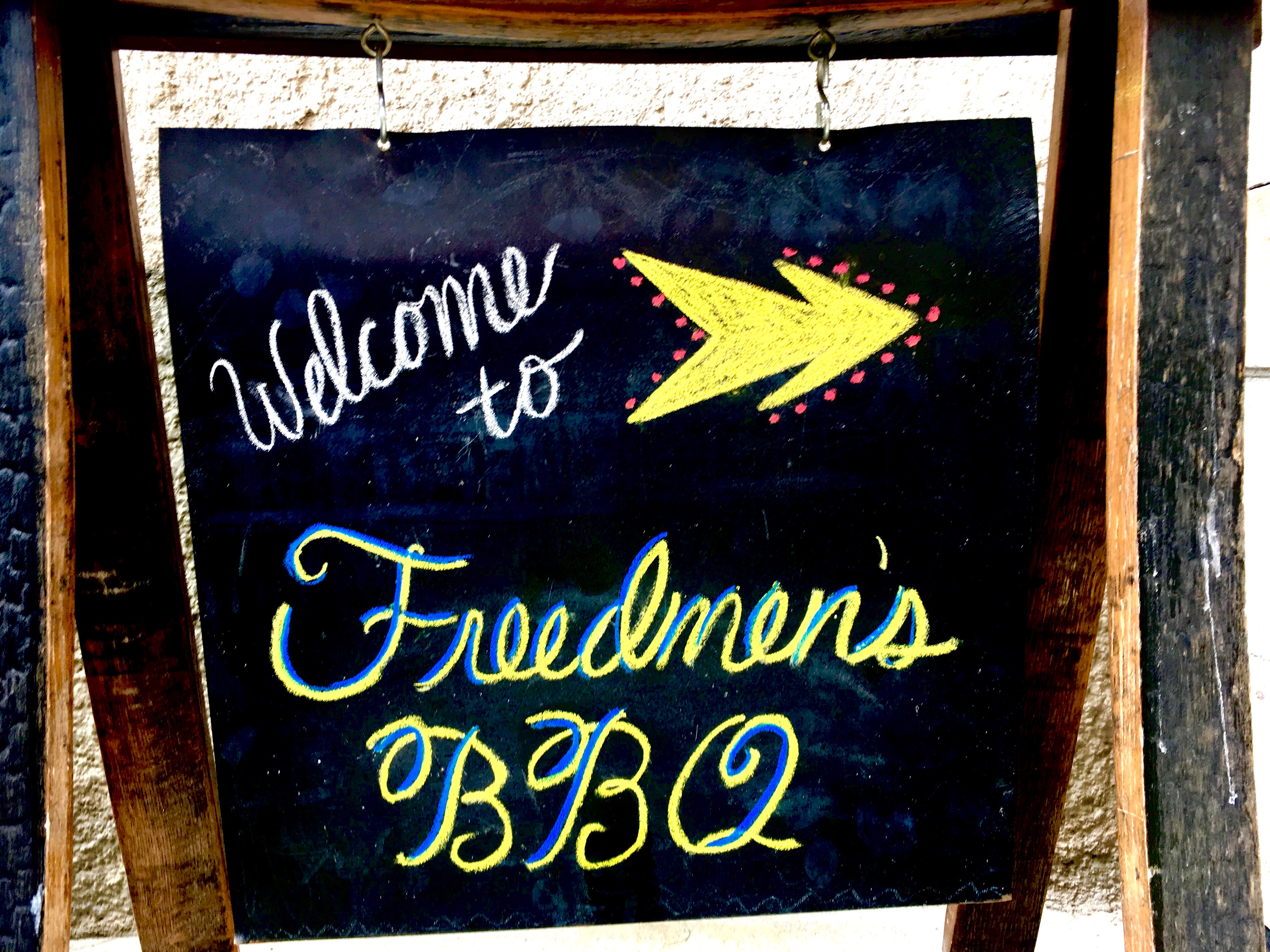 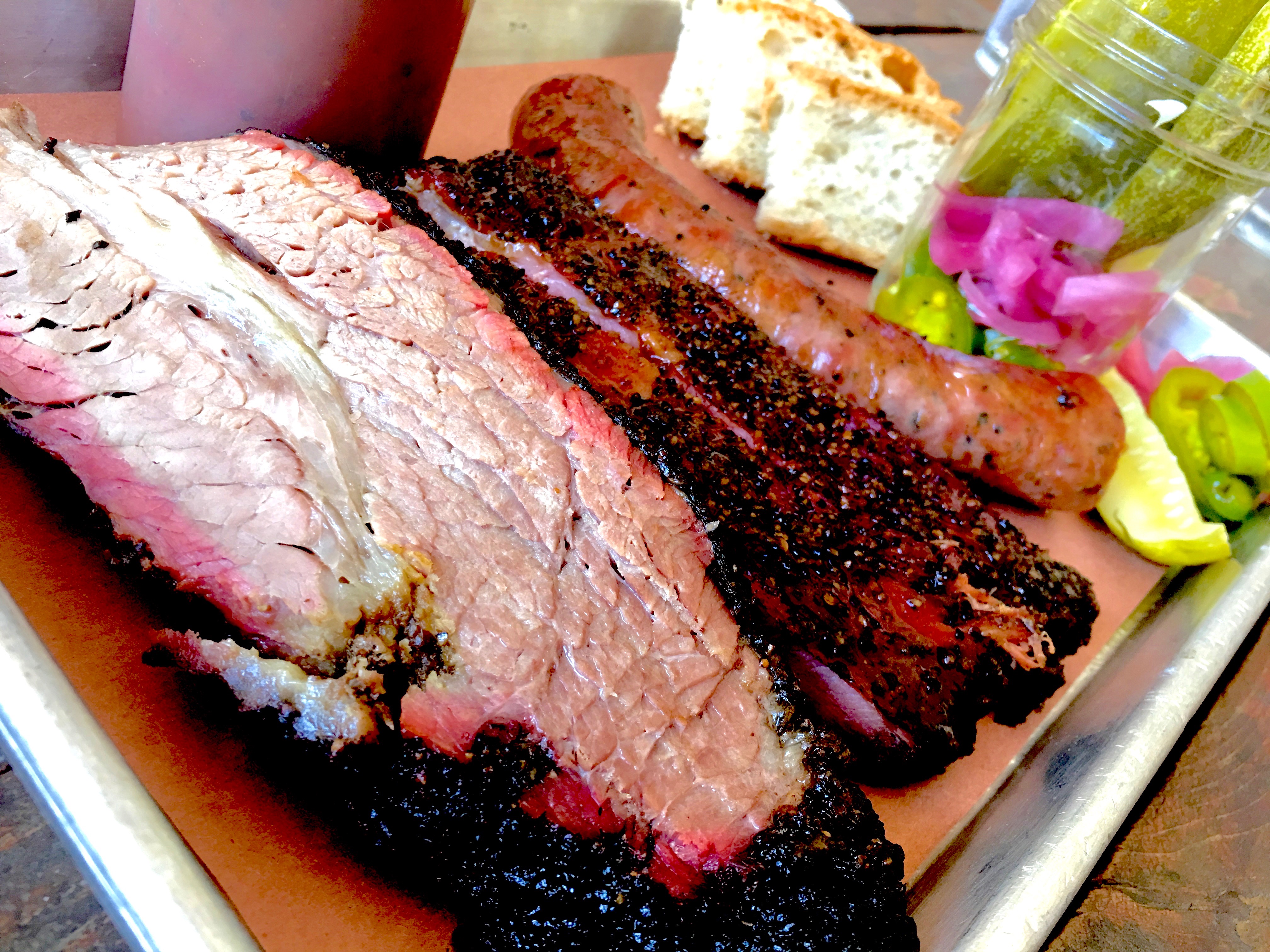 The Vitals:
the spot: Freedmen’s 2402 San Gabriel Street Austin Texas 78705
the eats:  brisket, spare ribs, sausage
the bucks: a plate of all three + house made pickles and bread will set you back somewhere between $15 and $20
the full nelson:  Chef driven Central Texas BBQ you can wash down with the craft cocktail movement

Our second entry is another win if you are looking to sit in some comfort. Beyond the four walls and the air conditioning, Freedmen’s is a historic venue as well as a must stop on our brisket tour. Originally set up as a refuge for newly emancipated slaves to learn how to read, write and find work, the building would go on to become a church, one of the first African American newspaper offices in the country and now, a barbecue spot. Freedmen’s has a great bar program though with barbecue like this, I would just stick to a few glasses of bourbon. The first pit master came from the fine dining world which is probably why they make focaccia bread and pickles in house as well as putting in a little TLC into the sides like a horseradish potato salad spiked with their own pickled jalapeños. But you are looking for some Bang for your Brisket Buck so stick with the old Texas Trinity of Brisket, Sausage and Spare Ribs. You can order by the quarter pound which makes squeezing a rib onto your plate a possibility even on a budget. Speaking of ribs, these are my favorite spare ribs in town. 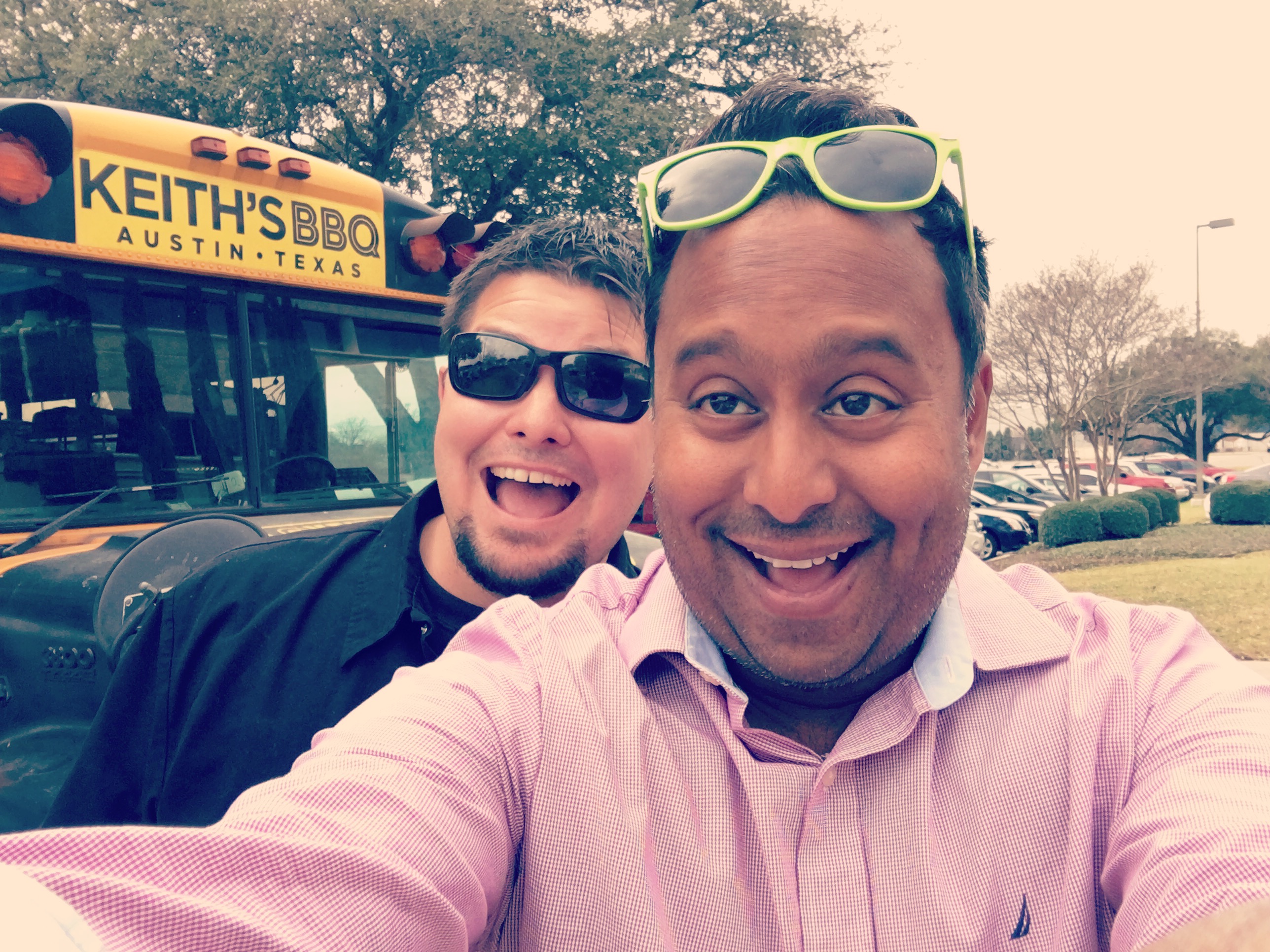 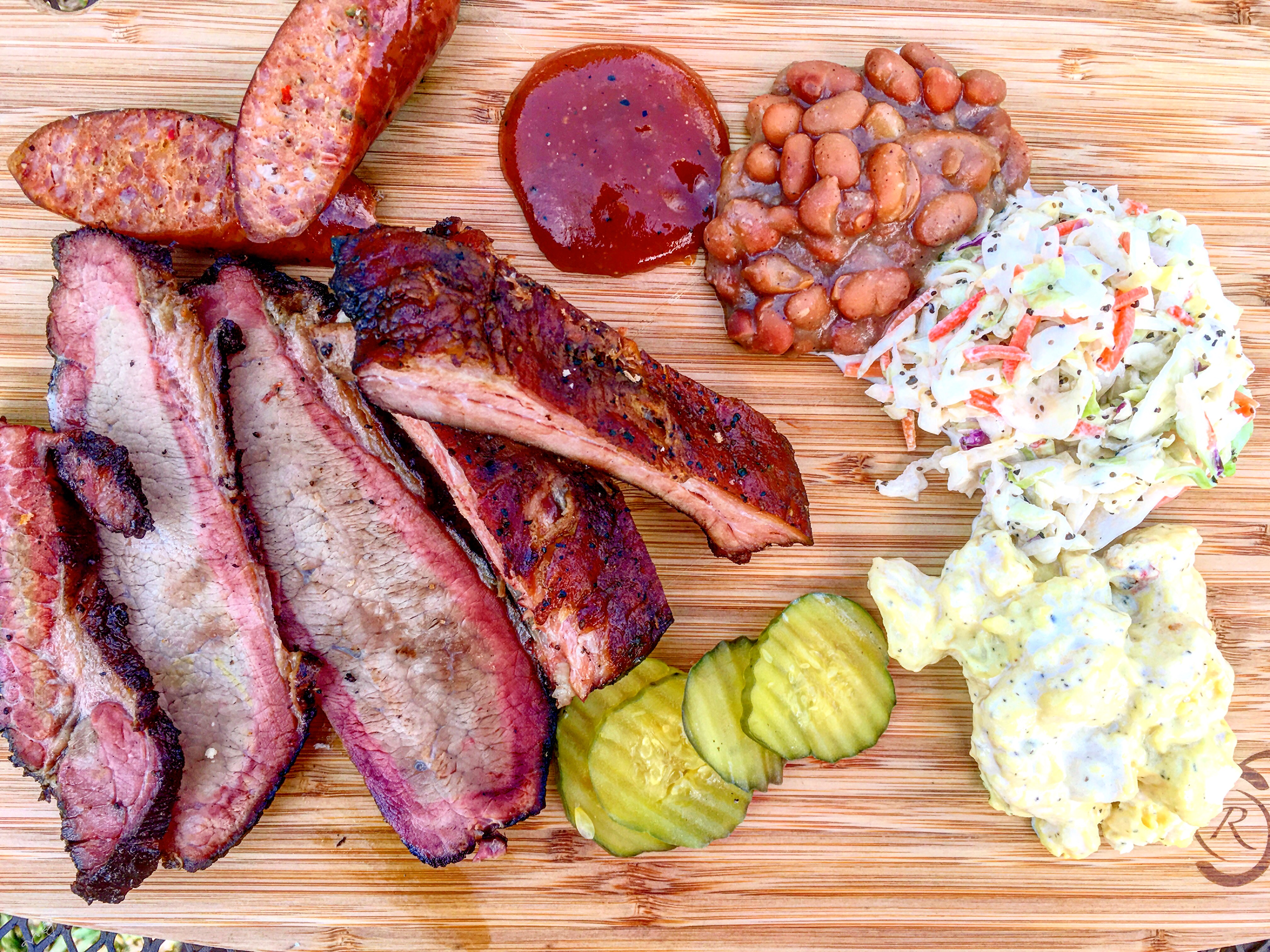 The Vitals:
the spot: Keith’s BBQ The Meat Bus is always on the move so check in on Facebook and Twitter!!
the eats:  three meat plate – brisket, baby back ribs and sausage
the bucks: $12
the full nelson: the most fun pit master in town also delivers the best bbq deal in town

It should be no secret to many of you that Keith’s was featured in the Austin episode of Cheap Eats and for good reason: his bbq plates are a steal. If you don’t know it by now, I will spell it out: barbecue means meat and meat AINT cheap. It shouldn’t be either. And brisket is the most expensive barbecue there is. That being said, all that you see up there will run you about $12. With sides. Now Keith might have been a bit generous when he served up my three meat plate but believe me he is a generous guy, basically doing it all on his own(his wife Robyn is a rock in the kitchen though) and believe me his smile is as big and as genuine as mine. He runs his pits hotter than some and uses hickory versus post oak. His baby backs get hit with a bold rub. His style and signature is his and his alone. For all the hype, hooplah and truth to the Lockhart lineage, barbecue is also BBQ. It is supposed to be fun, and doesn’t have to follow all the rules, all the time. And you seldom have to rock a line at Keith’s but that isn’t for lack of a loyal following, it’s that this magical meat bus is always roaming so get out the Twitter and keep your eyes peeled for the meat on the bus that goes round and round, all over town. 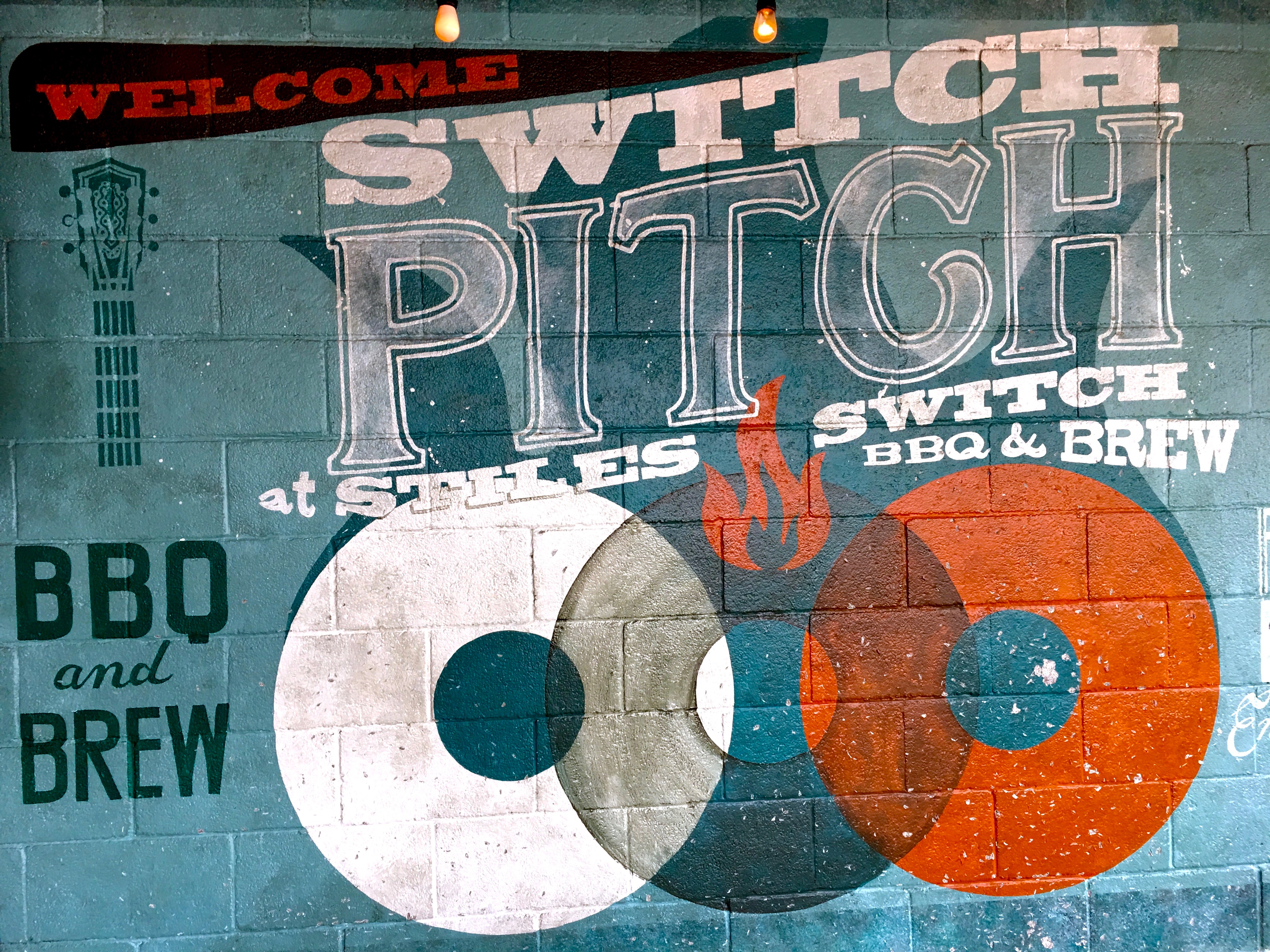 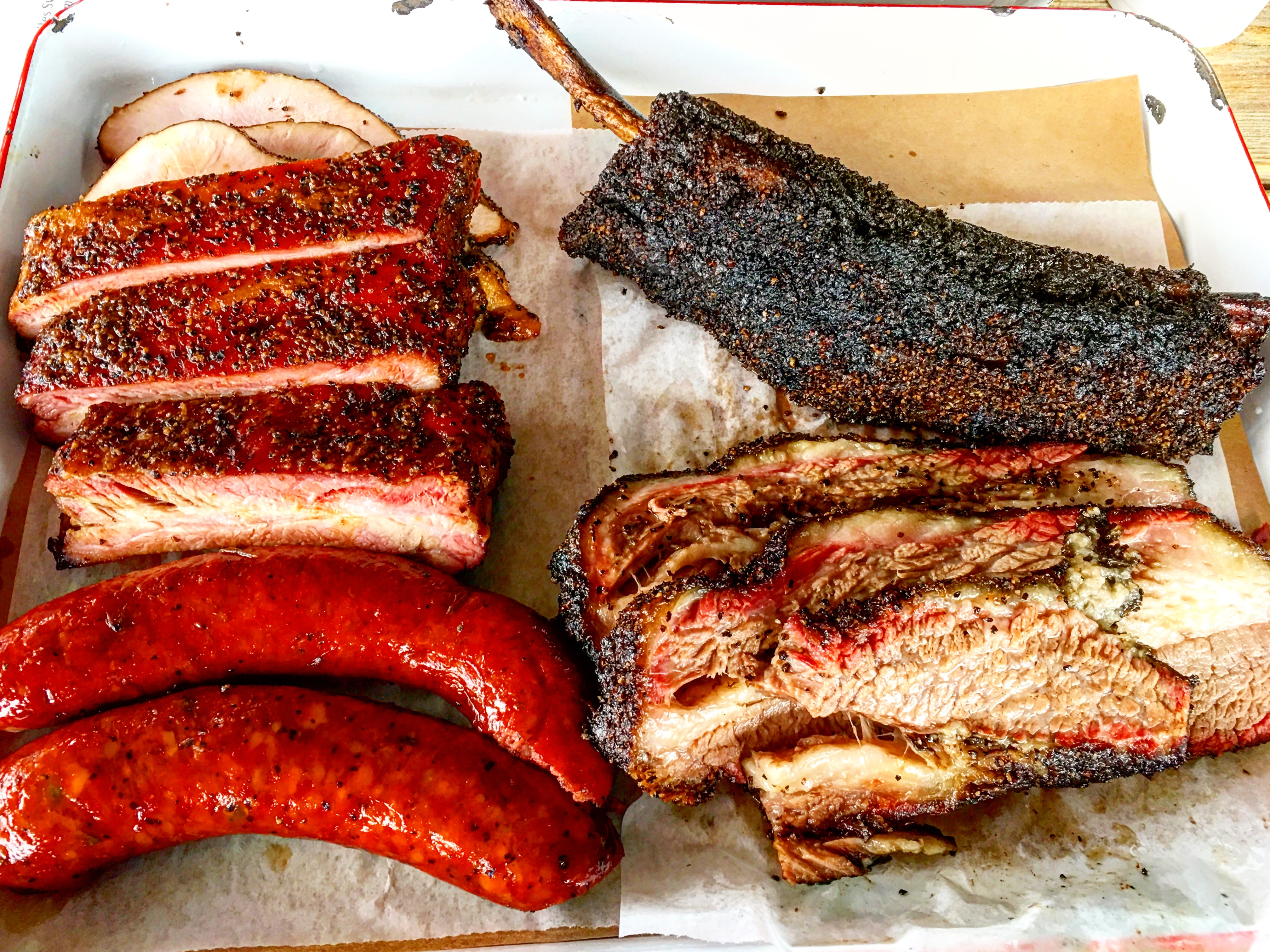 I’ll start with this: God Bless Stiles Switch BBQ. Although I am not a religious man, I can appreciate any sort of higher power that gives us mortals a solid barbecue standby without the ultimate buzzkills like hours and hours of waiting, often under a merciless Texas sun. Some may think Stiles is in a second tier category when brought up in a conversation with the likes of Franklin’s and La Barbecue. I couldn’t care less. This is fine barbecue y’all, not a single miscue  on this barbecue menu. Craft beer awaits on tap, the AC is a crankin and they have TVs – I MEAN HOW CAN YOU NOT LOVE THE PLACE ALREADY?!?!?! Ok, so now about the barbecue. Stiles is the place where I often take out of towners. Stiles Switch is Austin BBQ standby. Their brisket is that smoky fatty goodness that is everything bovine’s answer to pork belly needs to be. The links are fine, particularly the spicy and jalapeño cheddar. The specials like prime rib or the brisket tamales are certainly on point, and a worthy test of a pit master’s skills: Turkey breast, passes with flying colors. If I wanted to be stickler, I suppose I could call Stiles the second best barbecue place in town but it just might be my all time favorite. It’s basically your best friend from college that is still your best friend. Reliable, you got history and just goes great with a beer on a random sunny afternoon. 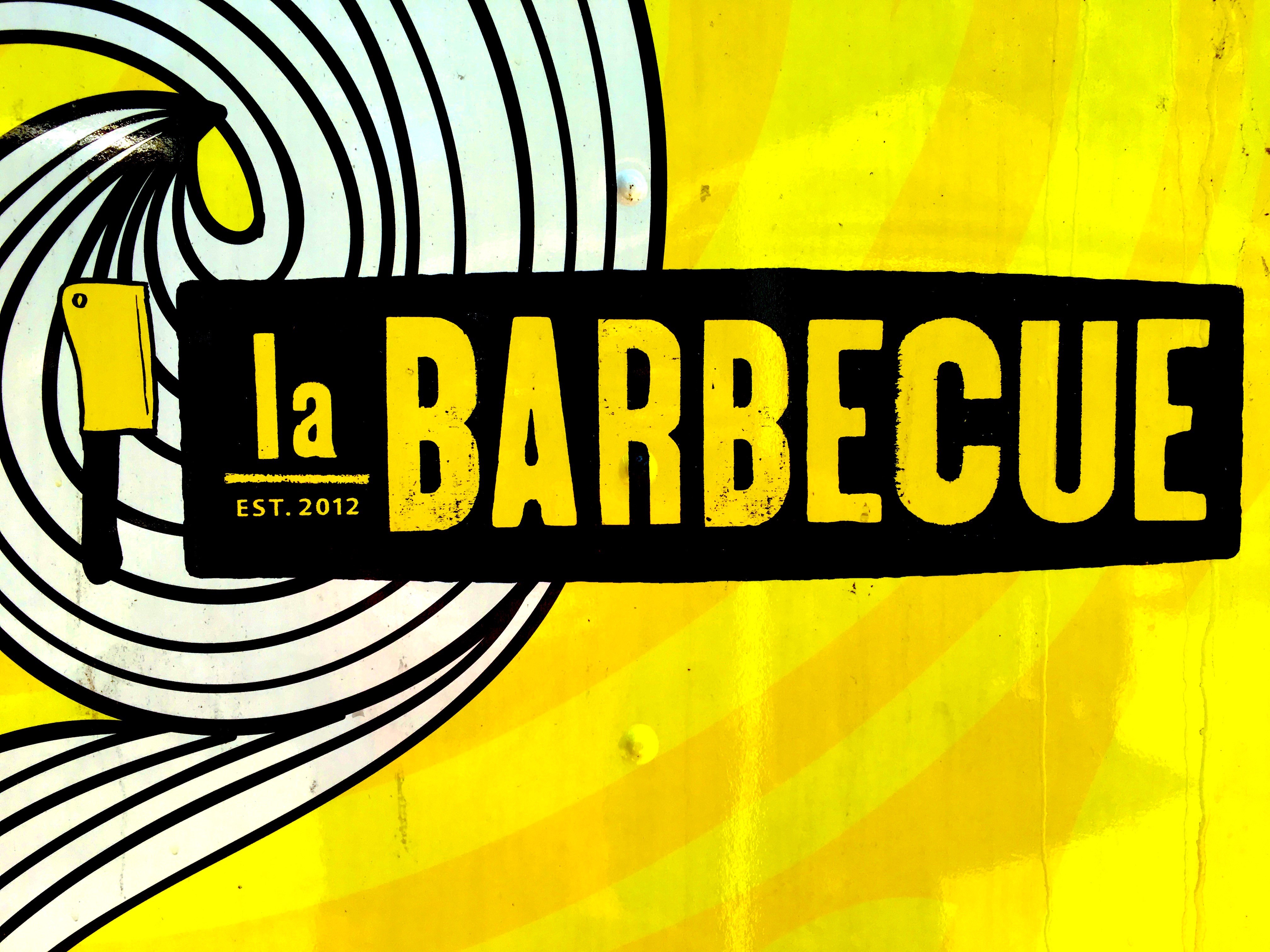 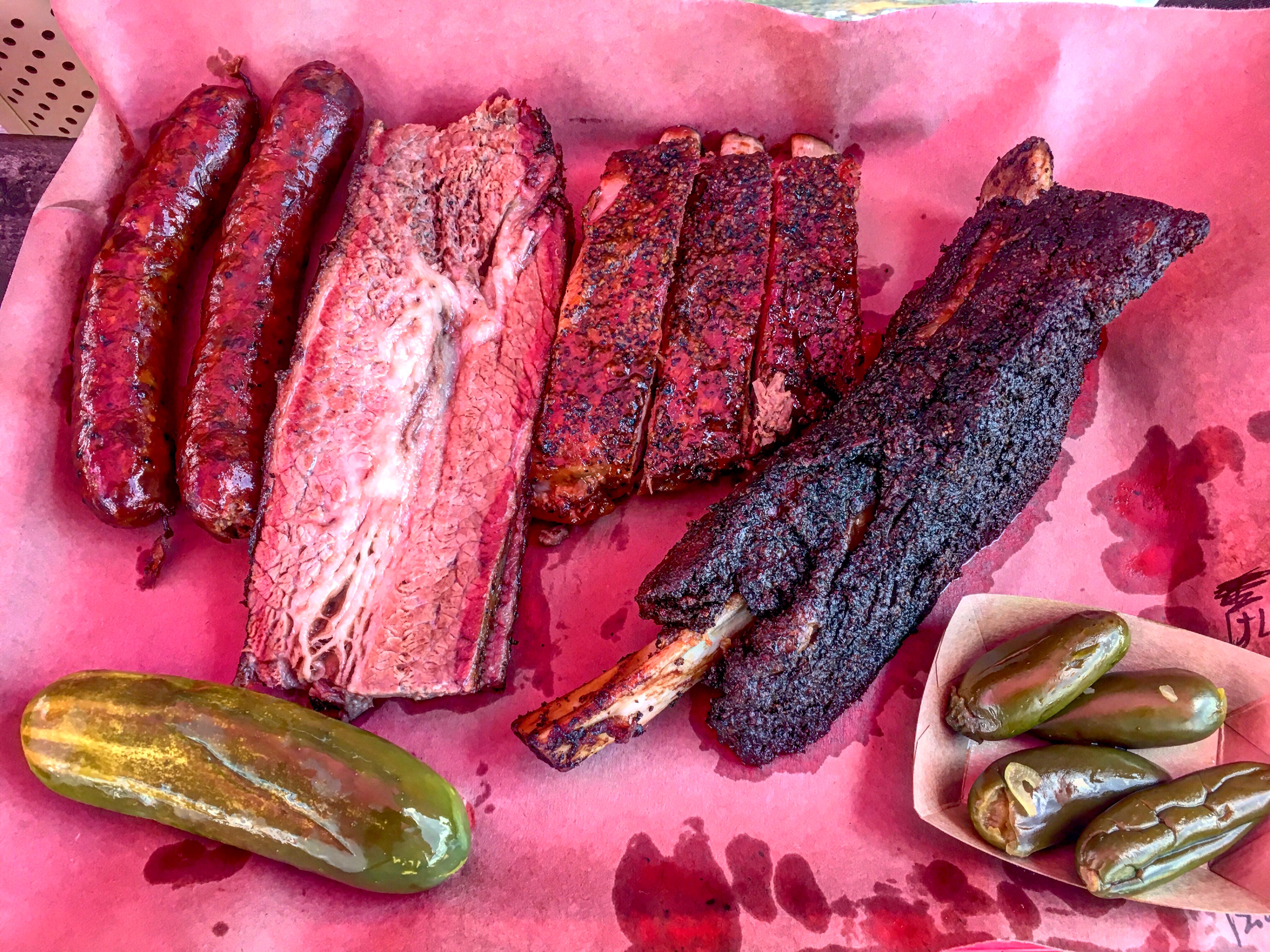 I supposed I could go into explaining why La Barbecue is better than Franklin’s or dive into the whole spiel about the Mueller family and a lineage that yields some of the best barbecue in America. But I would rather talk about how sad I am that La Barbecue is coming to Los Angeles, my old stomping grounds. See eating barbecue at La Barbecue is one of those special experiences you can’t fully appreciate unless you are swigging a beer, two hours in on three hour wait in line, feeling crushed by the Texas heat, holding on to the hope that eating the best barbecue ever will make everything you have endured seem worth it. And it is. Yes, those lines are serious and that is as important to the experience as napkins. Yes, this is yet another food trailer in Austin Texas but we ain’t talking tacos people, this one slings beef gold. Locals consistently hail it as the best, even better than Franklin’s. I have only had Franklin’s once while that brisket was amazing, La Barbecue serves a Brisket that is better than most steaks I’ve had. But the kicker is that now they are coming to Los Angeles and so much of why I love La Barbecue will inevitably be lost. They say artists should suffer for their art. Well, I think people should definitely wait for their barbecue. No line, more often than not, can be a bad sign and there is always one at La Barbecue. Some of the reasons for my love for La Barbecue are deeply personal. It was here that my wife and I decided to leave LA and move to Austin. It was here where I first tasted real Texas barbecue. It was here where I first experienced a cuisine that was native to the land my feet were standing on. God made Central Texas so that Central Texas would smoke brisket. I’m not a religious man, but La Barbecue is evidence of divinity, proof of a higher power. Every time I eat this barbecue, my faith in humanity rises up a notch. And now there will be a second one. And suddenly that specialness seems diminished somehow. Maybe the LA one just won’t live up to the OG East Austin trailer, I certainly would like to think so. La Barbecue is just that special of a place to me. And yes my friends, they do serve the best brisket around.

But wait? Where is Franklin’s? And what about the OG players down in Lockhart? Well barbecue in Texas is just to big to squeeze into one post so be on the lookout for a full report on Franklin’s this summer and a temp read on Lockhart soon. But in the meantime – go get ya some of this brisket!!

2 responses to “Bang for your BRISKET Buck: 5 Austin BBQ Picks”