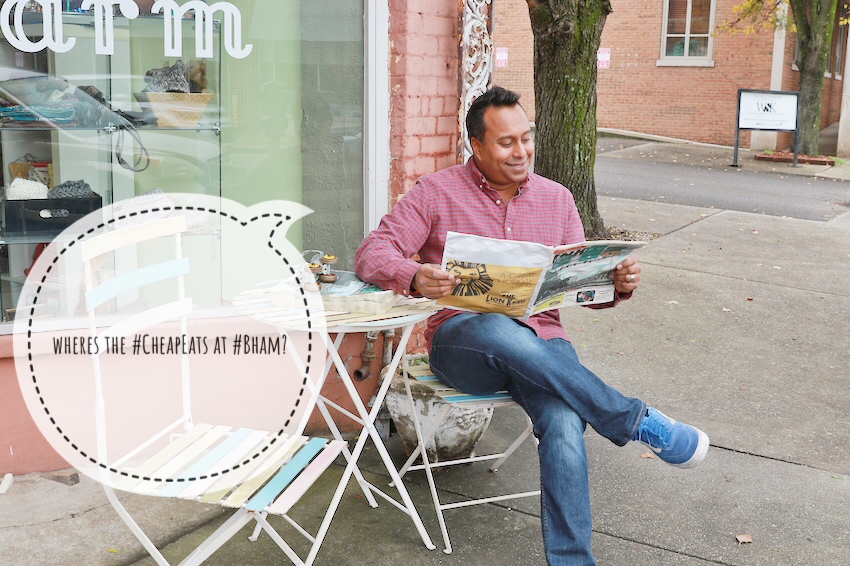 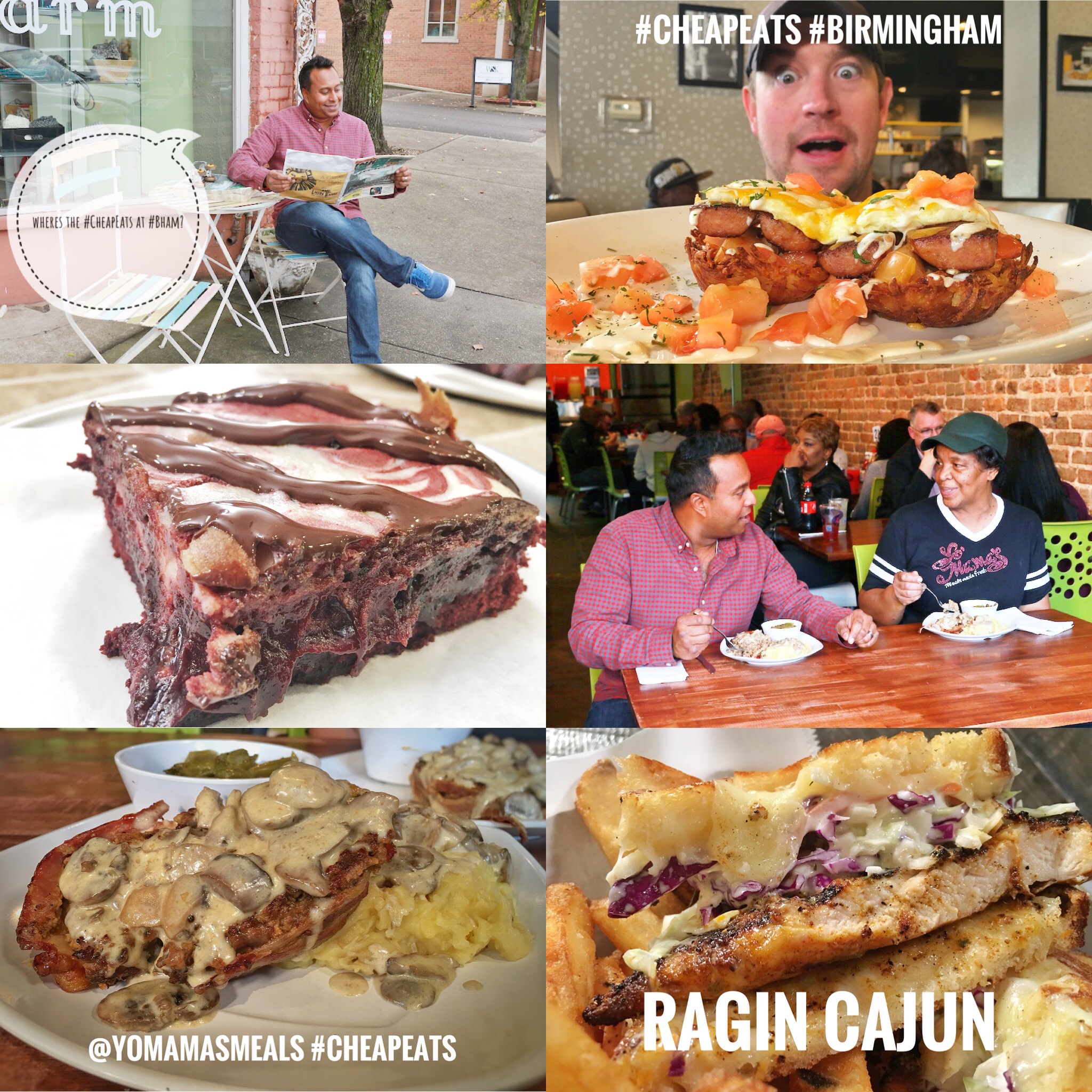 When one thinks of the South, Soul food, Barbecue, the struggle for Civil Rights and music, specifically the Blues, immediately come to mind. I cannot think of the South without thinking about the African American experience, I believe that the two are intertwined forever. In short, with so much history and infamy, it is hard to imagine a Birmingham that can described as “hip” or “trending”; but don’t let the past cast a permanent shadow over the present: Birmingham is changing. Food and Wine Magazine moved here from New York City, joining the rest of Time Inc’s slate of publications from Essence to Cooking Light. Birmingham’s hip and new Pizitz food hall is home to Ethiopian, Japanese, Vietnamese, Indian, Middle Eastern food stalls. And as of this month, Highlands Bar and Grill was named the most Outstanding Restaurant in America by the James Beard Foundation. Now that sounds like a city worth making a foodcation for. And as far as the Cheap Eats? Well, I’m glad you asked . . . 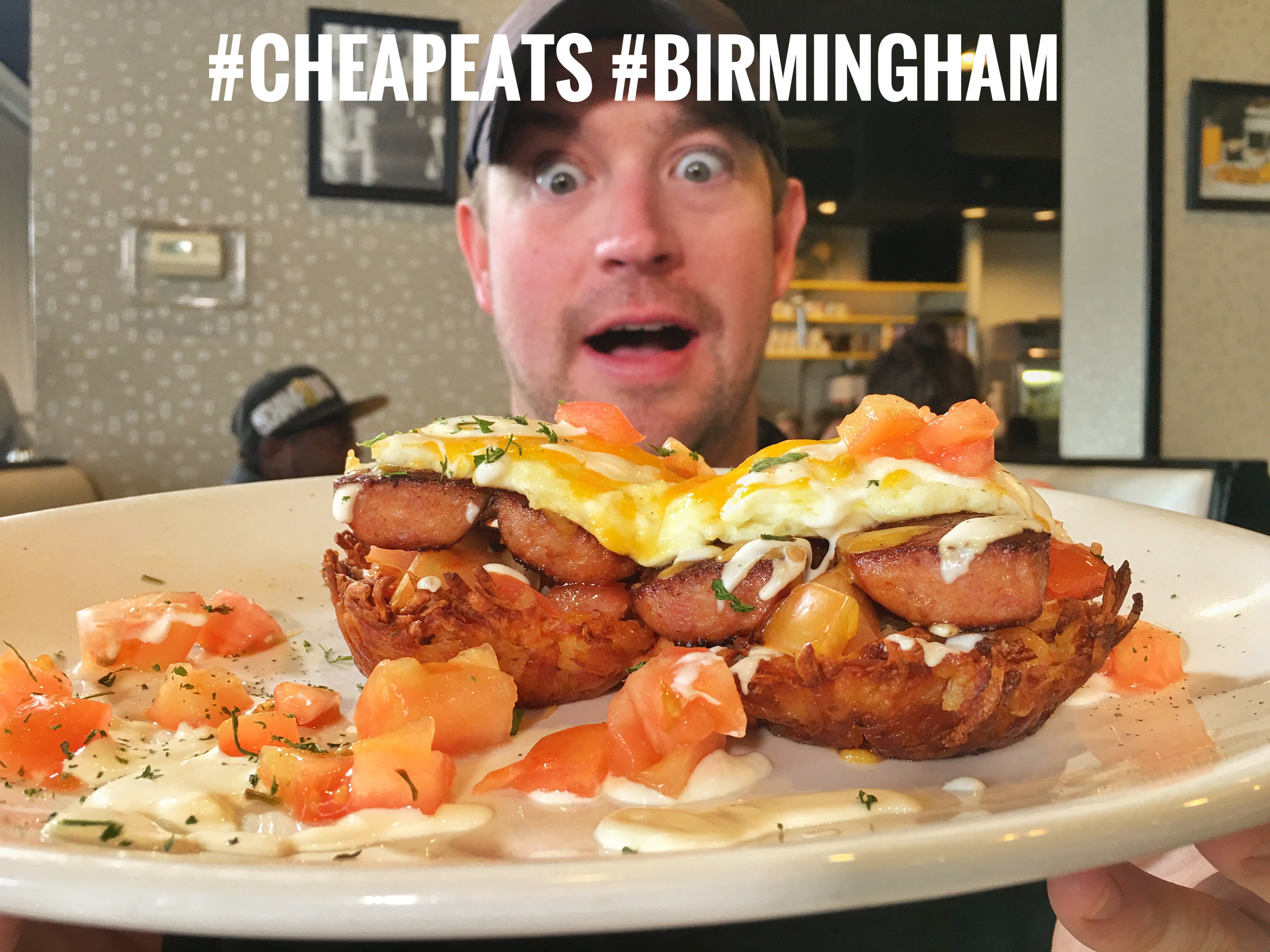 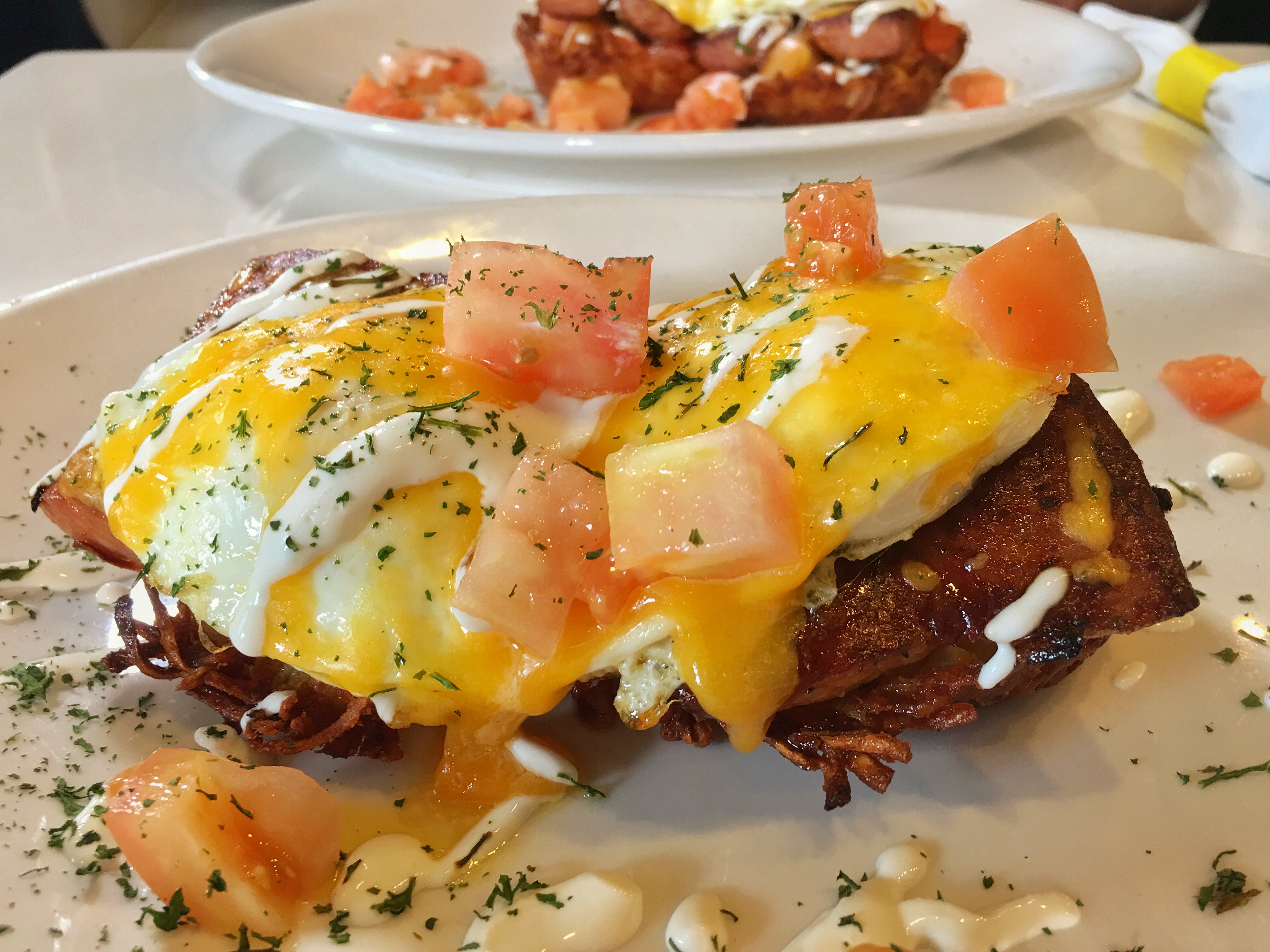 The Vitals:
the spot: Over Easy 358 Hollywood blvd Birmingham AL 35223
the eats: Hash Baskets
the bucks: $10
the full nelson: these hash browns are like Potato Latkes on steroids

I absolutely adore hash browns. They were always the starch of choice during the diner exploits of my youth. For reasons I have yet to properly research, there was a stretch of time when my breakfast potato options became limited to country potatoes, an inferior tater dish in comparison. Which might explain my instantaneous joy when I discover hash browns on the menu at Over Easy. But hash browns are usually served as a side dish, at Over Easy, hash browns are the main event. Kind of like a latke on steroids, Over Easy’s hash baskets are hash browns that are cooked in a muffin tin. Chef Steven Jackson knows the draw of a crispy hash brown(you really should ask for them well done when ordering at your diner) and he cooks them till the edges are a golden brown. Once done, the hash browns get a dose of the Eggs Benedict effect by being topped with two cooked eggs to order and some cured pork – in this case a butterflied link of andouille sausage. Toss in some diced tomatoes, some melted cheddar, sour cream and herbs for garnish and you have potato latkes on steroids, also known as Hash Baskets. At $10 one could call this a steep breakfast, but I’m pretty sure my Instagram calls it #brunchporn. And a solid hashtag is always worth $10 in my Bang for your Breakfast Buck book. 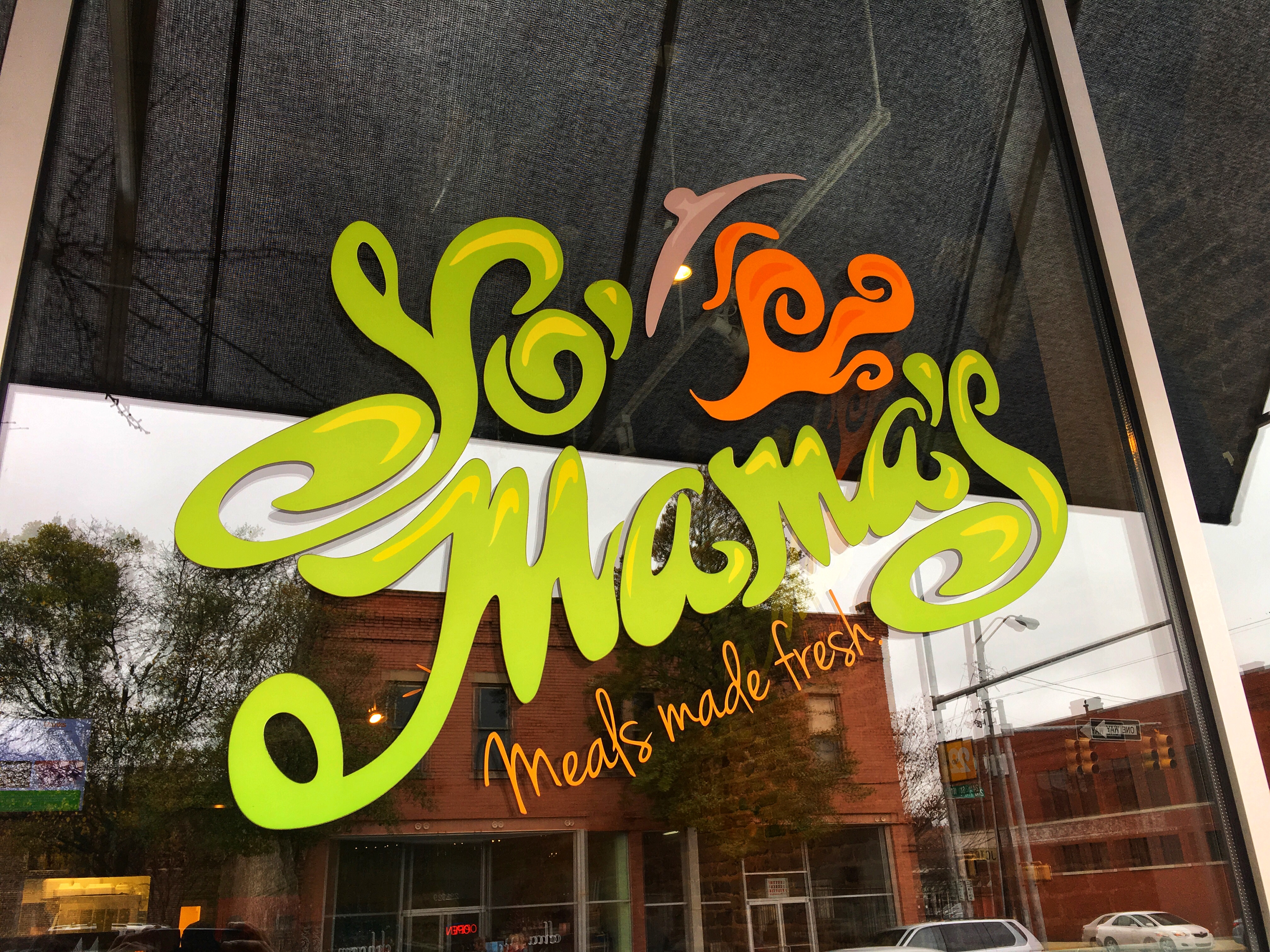 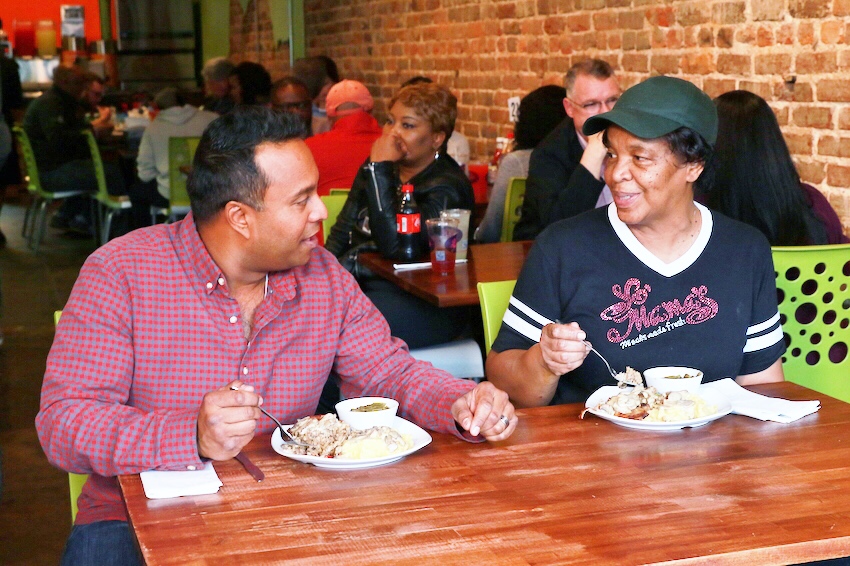 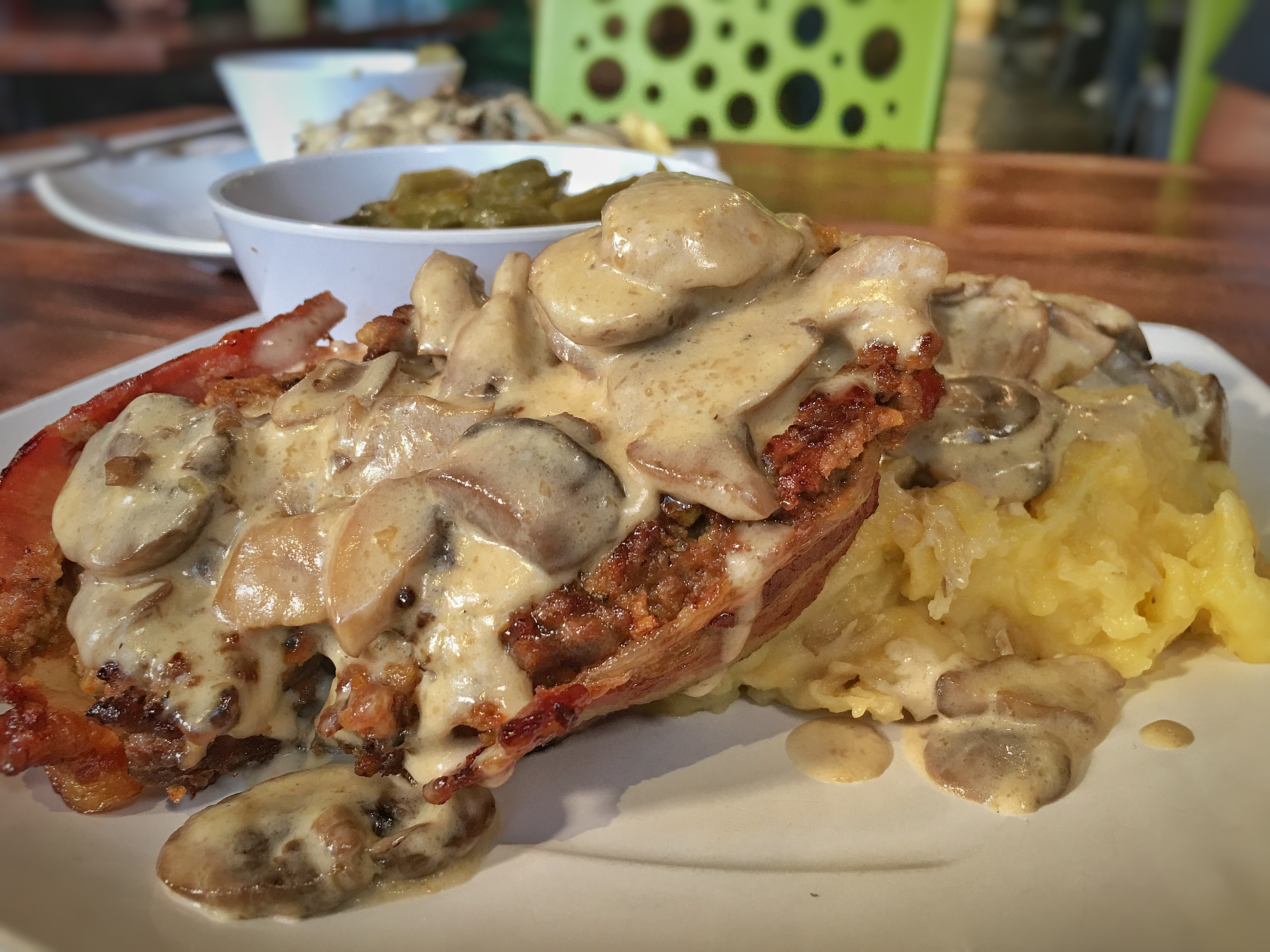 A follower on Instagram commented on my post of the above pic and said “I don’t even like Meatloaf and I’m drooling over this!” which makes me feel confident in calling Yo Mama’s meatloaf the best I have ever had. Now I should start to qualify my statement by revealing that meatloaf was one of my fav lunches in my school cafeteria days, which should say how much I do love the meatloaf genre. Growing up in a Bengali/Muslim household where pork was shunned, I gravitated toward all things ground beef, burgers being my top choice. Add to that an early fondness for French sauces and haute cuisine, and you can see why Chef Denise Peterson’s meatloaf was a perfect storm. First off the meatloaf is cooked twice: once as a loaf till cooked through and the second time as a slice to caramelize each side. That browning, also known as the Maillard reaction, is an instant flavor boom; responsible for the malty taste in beer, the umami of browned onions and the reason why you put a deep sear on a steak. And the flavor boosts don’t end there. The loaf is wrapped in bacon when it is cooked in the oven, gets a hit of Worcestershire in the blend, and the gravy(which is in fact a cream sauce) gets a hit of parmesan. That is a whole lot of Umami right there. So much so that instead of calling the place Yo Mama’s you could call the place Yo Mami’s . . . yeah, I had to. I am also a big of those creamy yukon gold potatoes, which is the varietal Denise uses for the mashed potatoes. You really cant ask for more with your $10 in the South: gourmet soul food cooked with a Mother’s love. 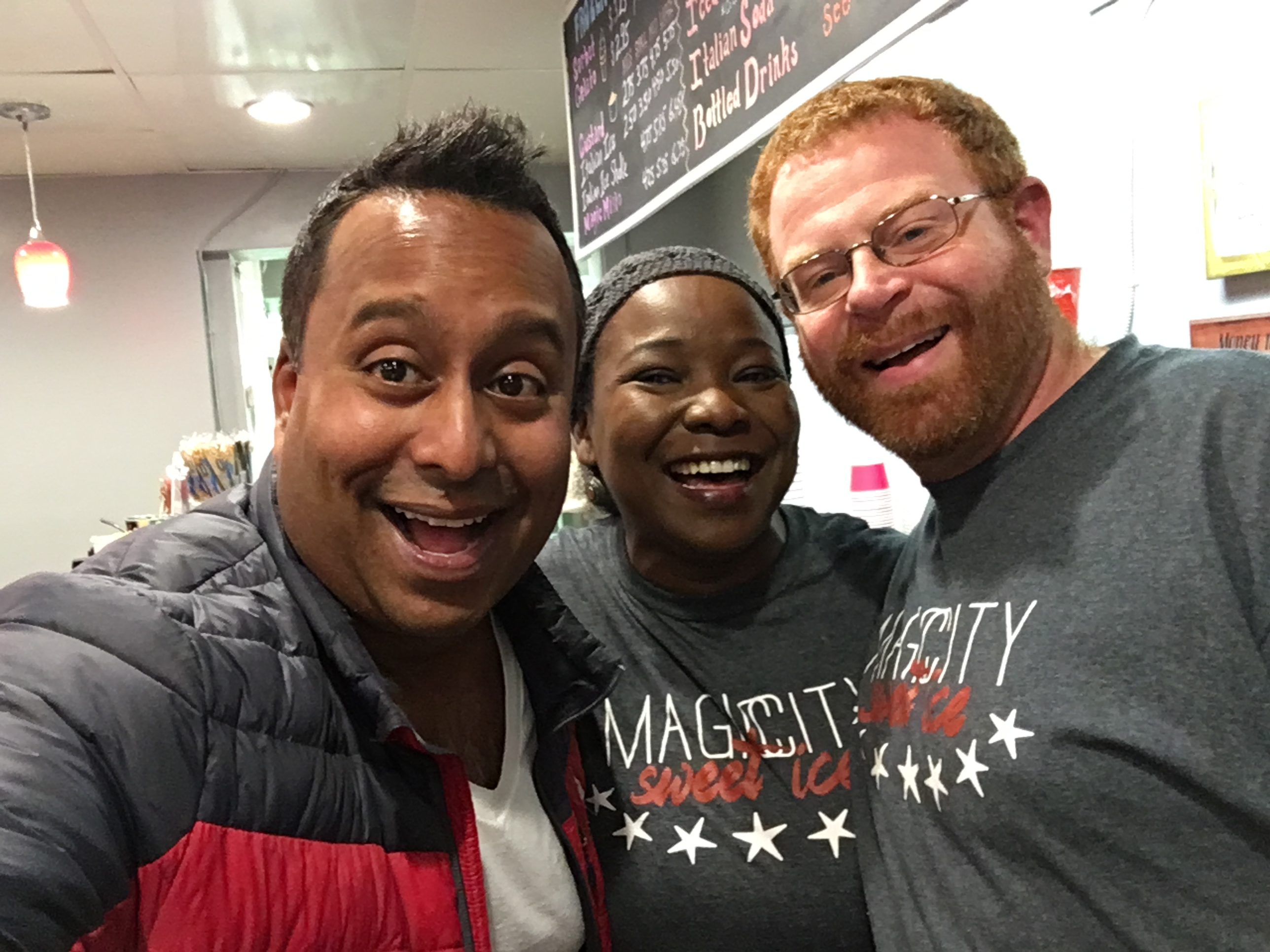 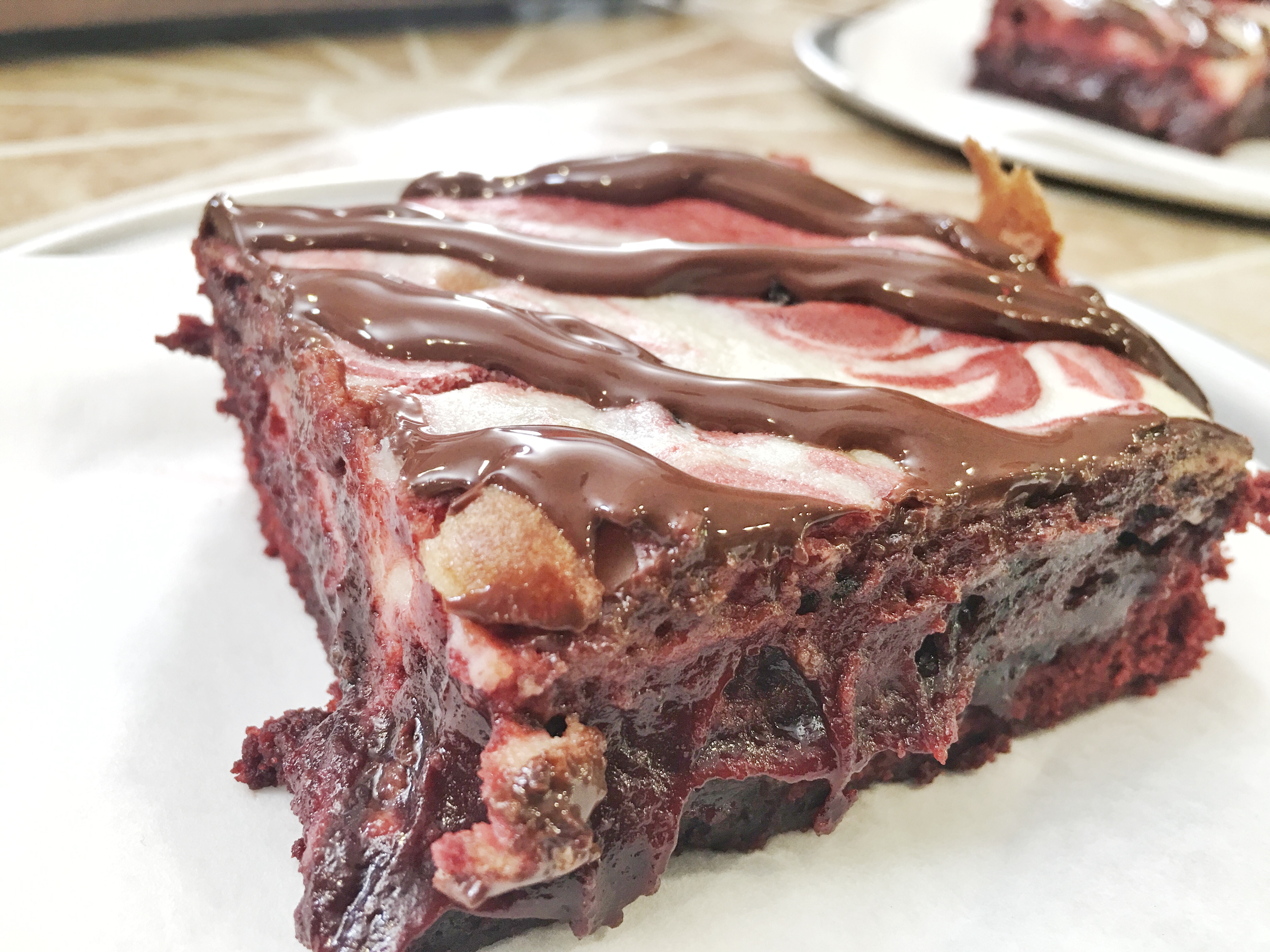 When one goes to a place called Magic City Sweet Ice, one would expect to stick to something most likely frozen. And when you consider how hot and humid summer’s get in Bham . . . well, something – in fact anything frozen seems like a snack go to. Well, Magic City Ice just ain’t that kind of one trick pony and neither is Baker in Chief Wani Shaw who is responsible for this sweet mashup of three epic desserts. Red Velvet cake, cheesecake and brownie are all fabulous on their own but their mashup is kinda beyond because of the way all three sweet treats work together. For me, Red Velvet is defined by the cream cheese frosting which is an obvious connection to cheesecake as cream cheese is part of the base. But keep in mind that the base of the Red Velvet cake is cocoa which pairs perfectly with a brownie. Red Velvet Cheesecake Brownie might come off like “everything plus the kitchen sink” kind of dish but all three components swirl together in a sweet psychedelic harmony. OK, so maybe I rocked to many dancing bear t shirts in the 90s but believe me this brownie is the Ice Cream flavor Ben and Jerry’s wished the came up with. And at $2.50, it’s a Cheap Eats snack steal. Well done Birmingham. 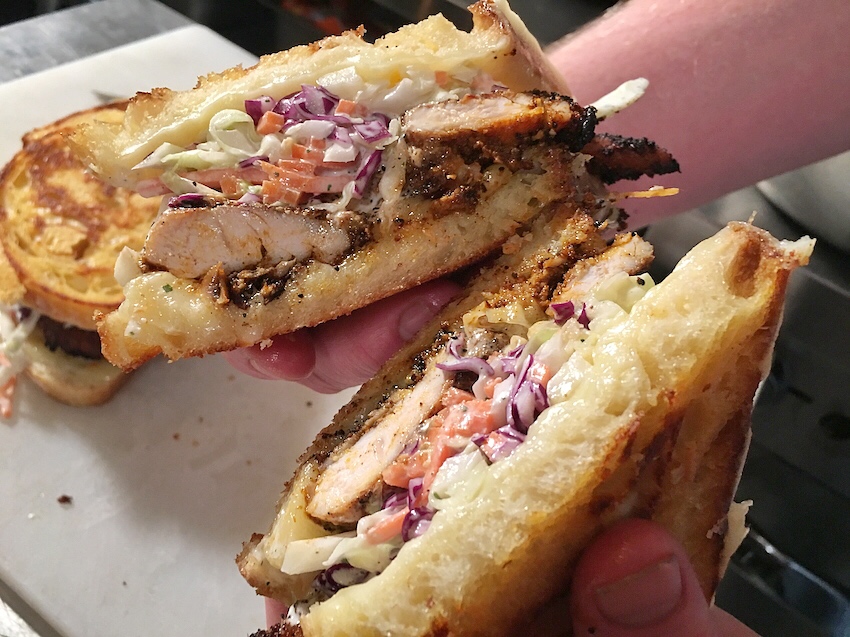 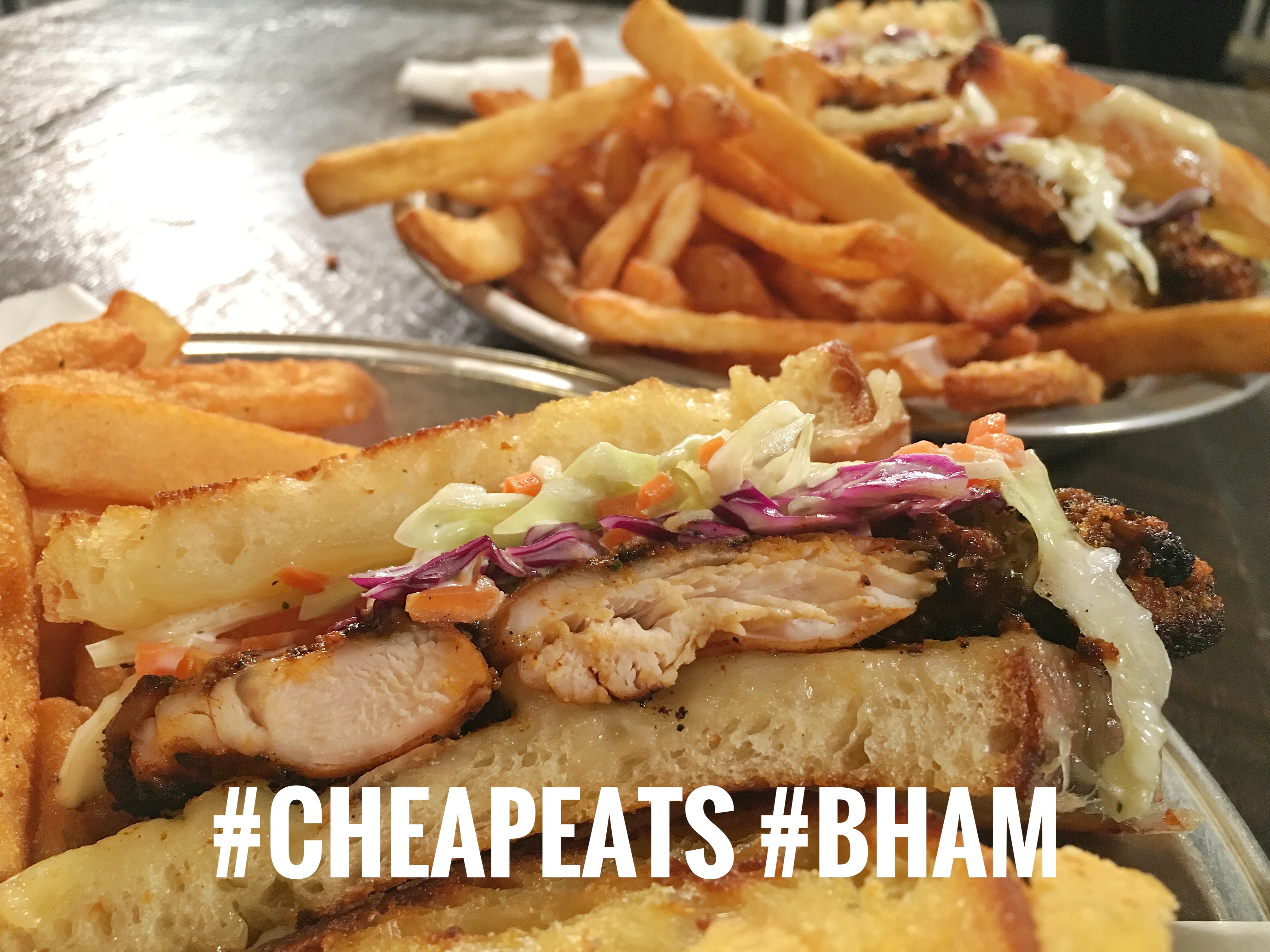 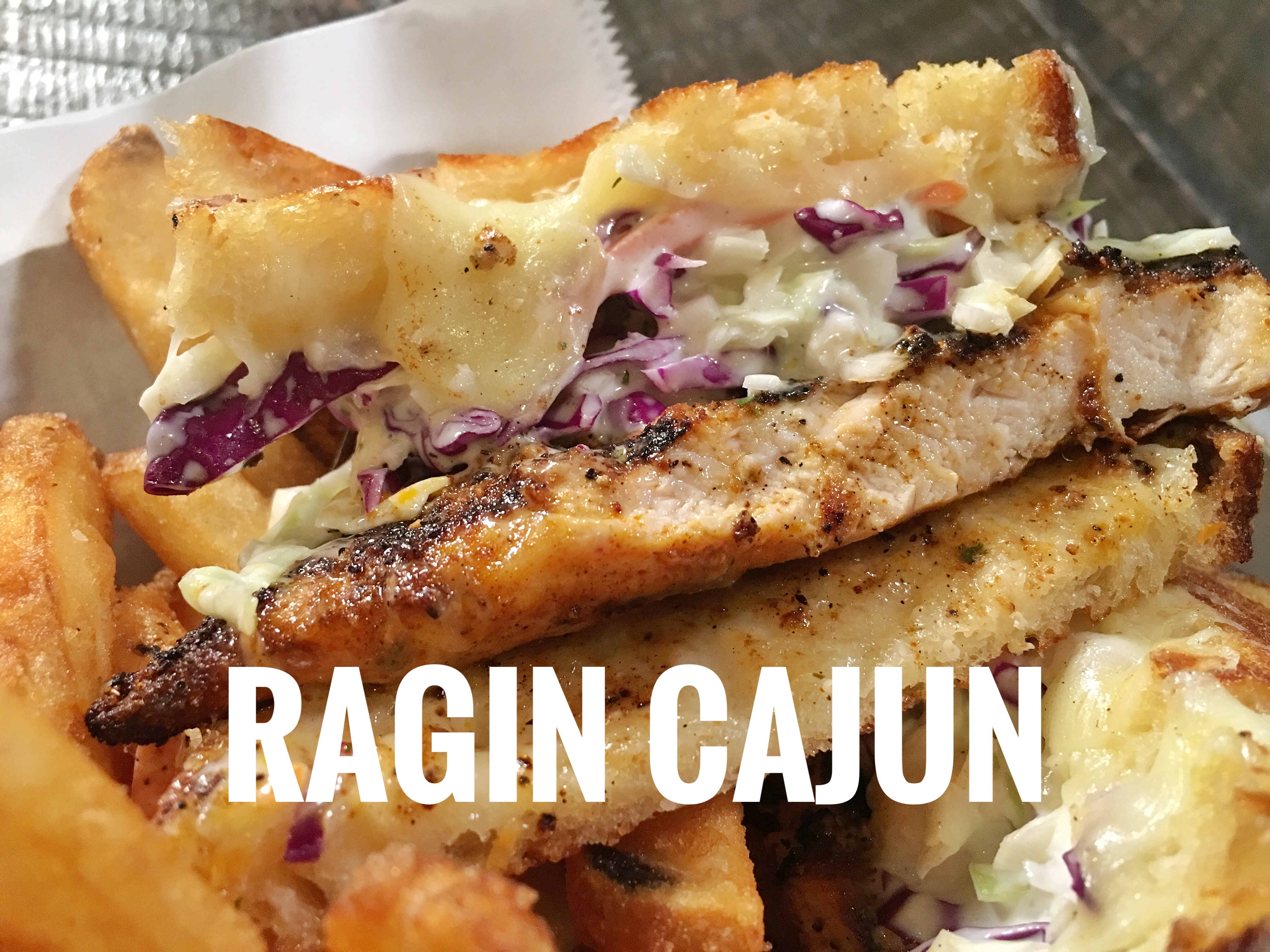 The Vitals:
the spot: Melt 4105 4th ave Birmingham AL 35222
the eats: Ragin Cajun
the bucks: $11
the full nelson: a grilled cheese sandwich for grown ups. and angry people from the bayou.

The Cinderella story of the little food truck that could, turning into a full blown brick and mortar has become part of restaurant lore these days and Melt is no exception. Starting off as a food truck in 2011, Melt graduated to a Brick and Mortar in 2014, choosing to open up in the up and coming neighborhood of Avondale. Nothing spells hipster quite like gentrification and that’s exactly the type of hood Avondale is. Melt takes the concept of grilled cheese and goes over the top. The menu features ooey gooey sammie beasts like the 3 Amigos: Ham, Chorizo and an over easy egg topped with habanero and Monterrey jack cheese. There’s also a Patty Melt tuned out with swiss and grilled onions that can be cooked to temp and a Cuban sandwich which sticks to tradition with ham, roast pork, swiss, pickle and mustard. But being in the South, the Ragin Cajun caught my eye and my palate. Something about blackened chicken and jack cheese just makes sense, and I love the combo of Monterey and habanero they use here as well as on the 3 Amigos. This sandwich is hearty, messy and meaty. Great texture from the locally sourced griddled Texas Toast and creamy coleslaw. Pronounced spice from the blackened chicken and the habanero in the jack. And you are gonna need both hands and plenty of napkins because this sandwich is a meal. How can a grilled cheese sandwich turn into something so well thought out? The answer lies with the real deal chef behind it all: Joey Dickerson. Joey is an Alabamian, who has been rocking chef’s whites for over two decades but you wouldn’t know it when you meet him. He has the energy of a young line cook and it comes through in his cooking by way of consistency. As if running Melt’s kitchen wasn’t enough on his plate, he and his restaurant group opened up a new place called Fancy on Fifth which yours truly had the pleasure of dining at. You are gonna wanna watch the price dial here but the burgers and oysters at Fancy’s on Fifth are a relative deal and damn good too. I have long made the case that great burgers don’t need to cost more than $10 but of course there are exceptions. Well I can now say that in the case of grilled cheese sandwiches, yes you can easily make them at home but if you are making them as good as a Ragin Cajun . . . I’m coming over and I’m bringing my $11 bucks with me. 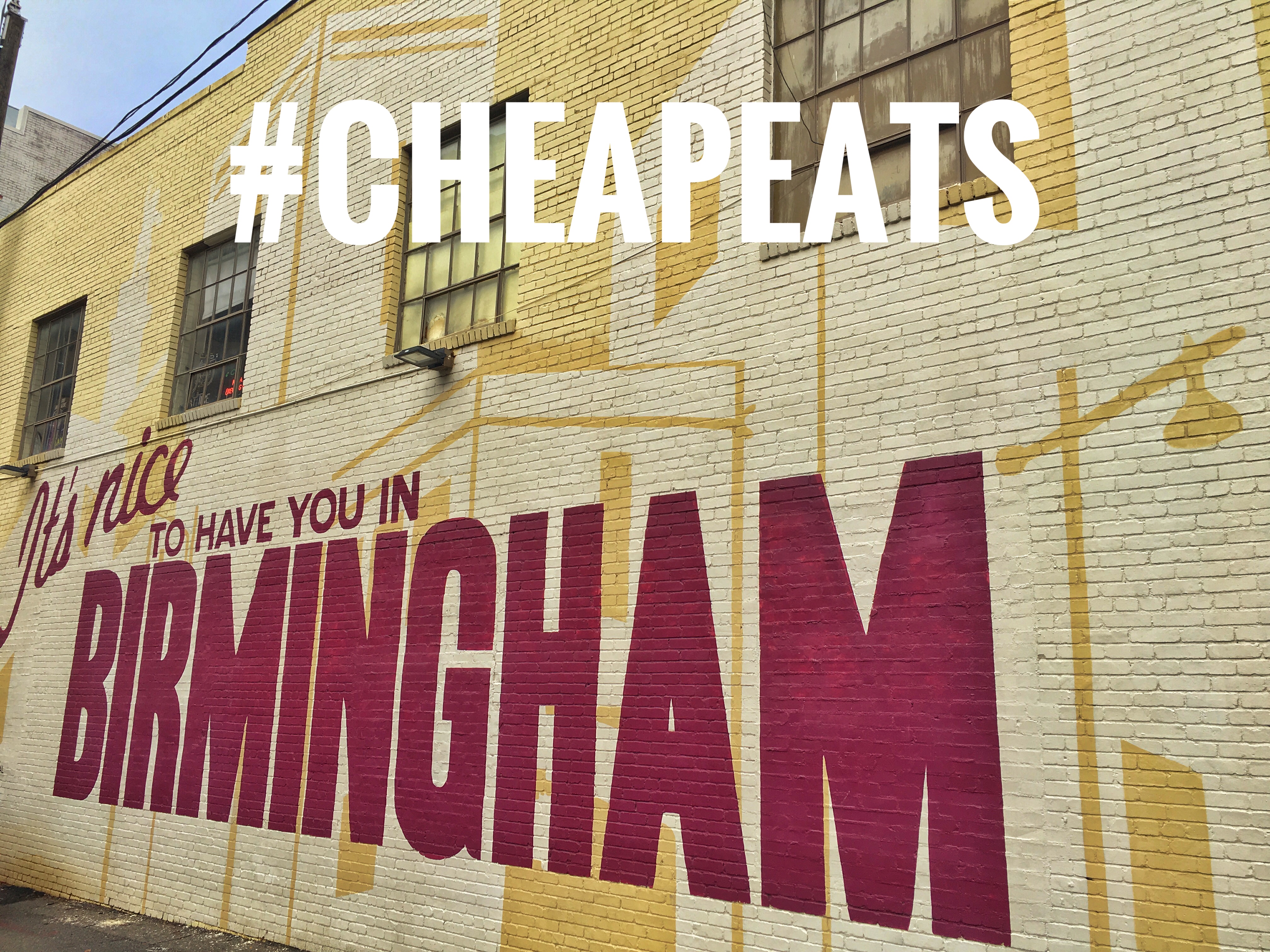 And that was Cheap Eats in Birmingham! Plenty ‘o deals and really just a taste of a growing food scene in the South. On my list of places to hit up next are certainly Highlands Bar and Grill, Saw’s BBQ and Pizitz Food Hall. But it won’t just be food on my next visit, as I’m planning on visiting another attraction here: the Birmingham Civil Rights Institute. Like I said earlier, I can’t think about the South without thinking about the history that has shaped this part of the country. To think that a movement like the Civil Rights Movement had it’s beginnings at a restaurant: the lunch counter sit in at a diner in Greensboro NC. And now to see a city in the South serve a myriad of different peoples, in some cases in restaurants that are black owned, is inspiring to say the least. Looking back at Dr King’s Letter from a Birmingham jail, I don’t think we have gone as far he dreamt in terms of racial and social equality in America. Still I do believe that when he says: “One day the South will know that when these disinherited children of God sat down at lunch counters, they were in reality standing up for what is best in the American dream“, he would be comforted in the fact that the courage shown by those brave young men at a Woolworth’s lunch counter on February 1st, 1960 echoes through a dynamic, growing food scene that draws strength from the diversity of many different peoples. That’s Birmingham in 2018 Cheap Eaters, and it’s a city I’m excited for.