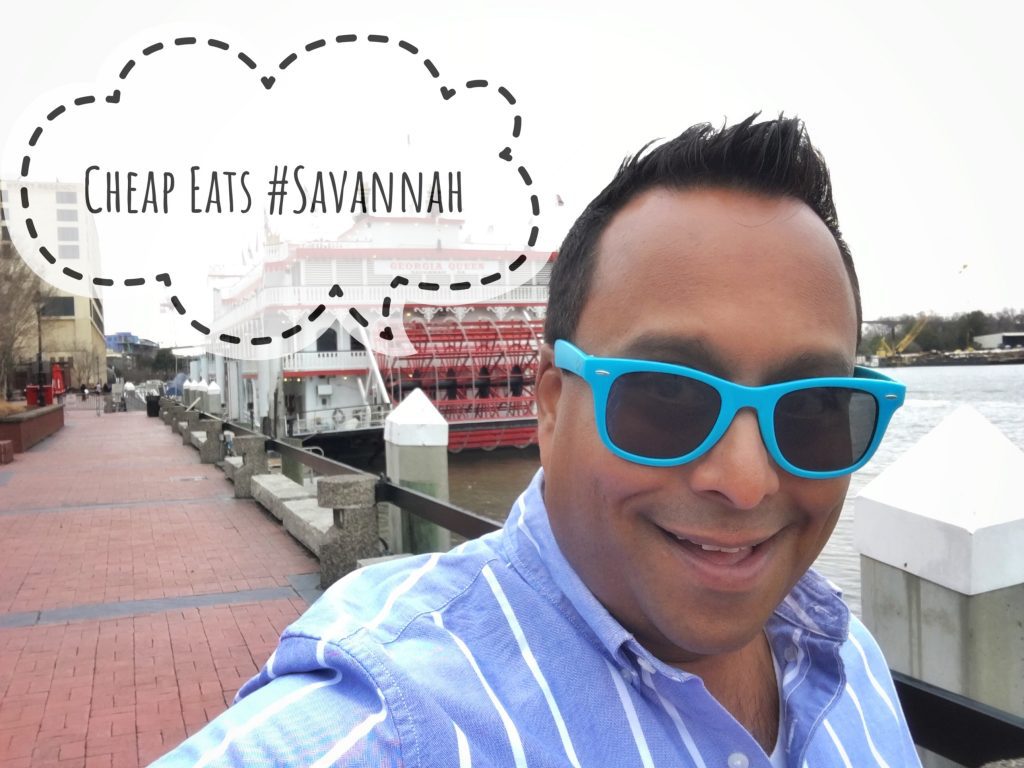 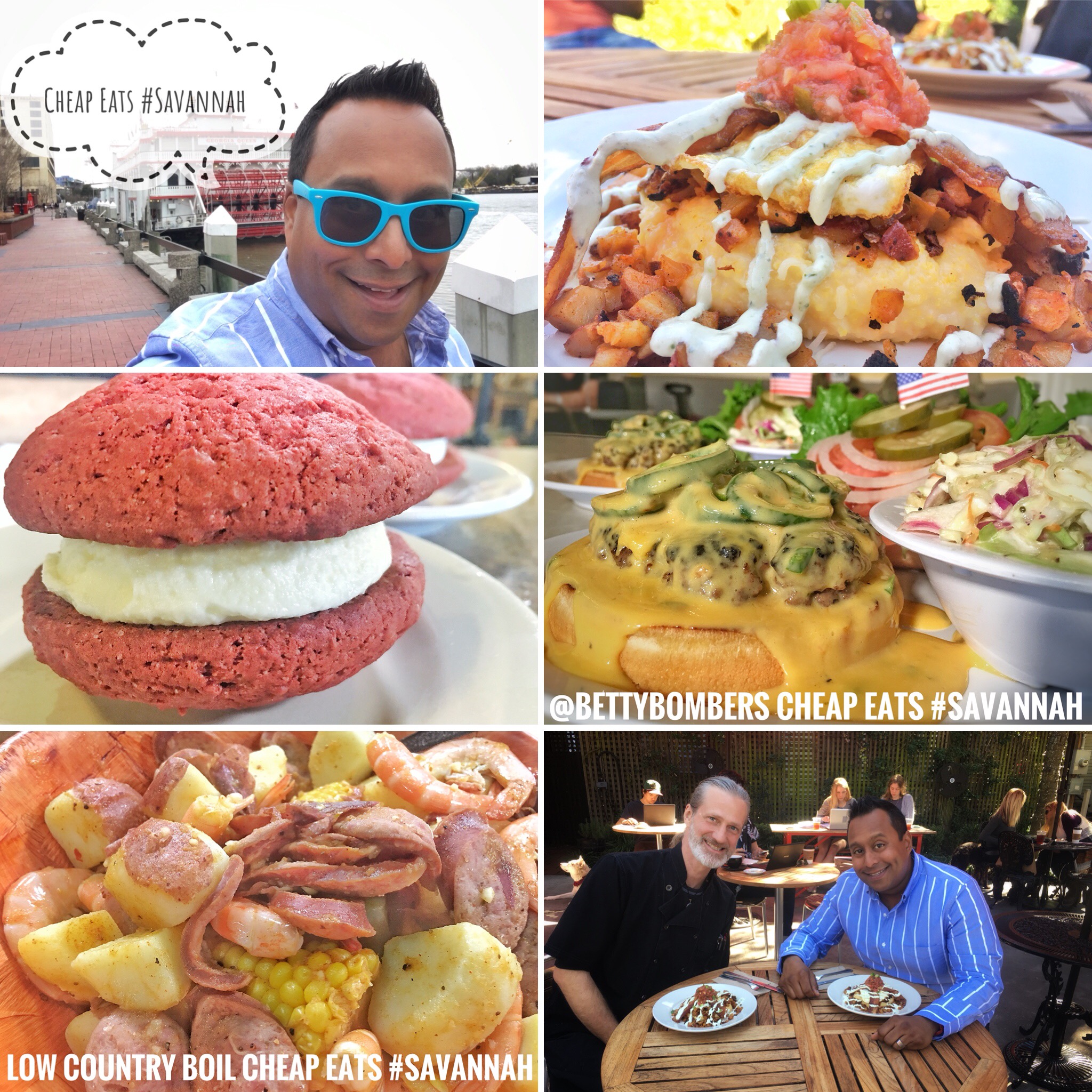 One look at that low country boil I scored for dinner in Cheap Eats Savannah reminds me of two things: Savannah Seafood Shack offers up a steal when it comes to the pricey world of seafood and my Cheap Eats Savannah escapades did not come so easy, cheap eaters. Savannah reminds me of Charleston in more than ways than one. It’s a gorgeous town that’s a postcard for the Antebellum South. The hanging moss and stately abodes make you daydream about purchasing a second home here. And as far as food goes, there are more than a few options for the foodie’s bucket list. While I was here, I slipped into Sean Brock’s Husk, Cotton and Rye, and Collins Quarter; all of which make for splurge worthy meals but splurges nonetheless. Add to the fact that tourist friendly towns like Savannah are loaded with tourist trap restaurants and you best pick your Cheap Eats wisely my friends. And with that, let’s take another big bite out of Cheap Eats Savannah! 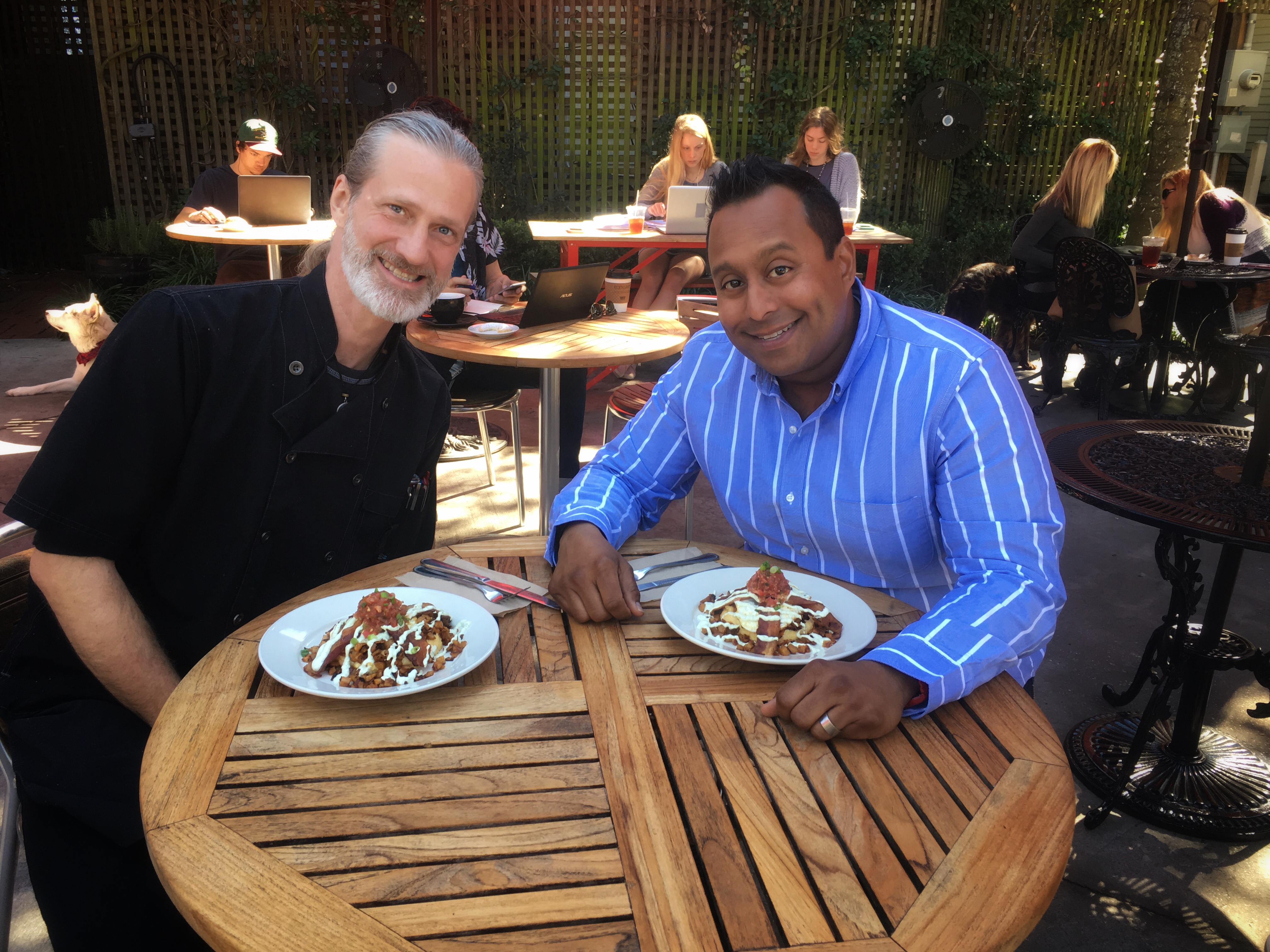 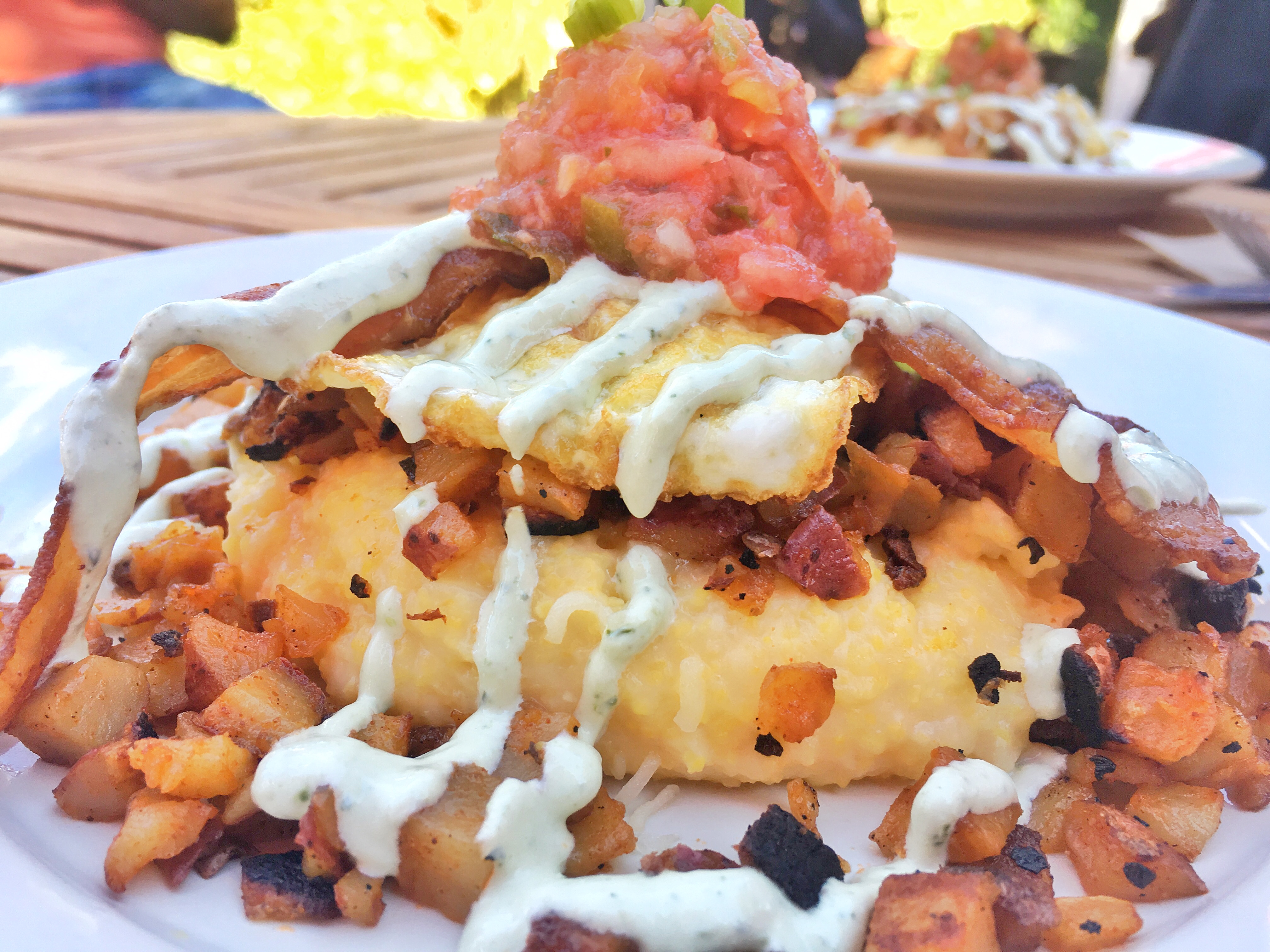 Being resident of Austin for going on three years now, I have easy access to Tex-Mex cuisine. My preference is for traditional regional Mexican but I can tell you this: salsa makes everything better. Over the last two seasons of Cheap Eats, I have spent a fair amount of time down south and I do believe the next stage of evolution for Southern cuisine is the incorporation of heat and spice from the Mexican pantry. The Foxy Haystack is that case in point. A bed of classic cheesy grits gets hit with home fries, bacon, a fried egg, jack cheese, cilantro crema and a house-made salsa. For years, my first move when digging into a savory breakfast was to reach for the hot sauce. The Foxy Loxy Haystack comes sauced up for you. And frankly, a pico de gallo(chef  Todd Park’s base for the house-made salsa)adds far more flavor and texture to grits versus a vinegar based hot sauce. The Crema, essentially a Mexican version of sour cream that is thinner with bite of salt and acidity, is a natural compliment to all things potato. And with this dish priced at just $7, makes for a perfect way to start my Cheap Eats Savannah day. 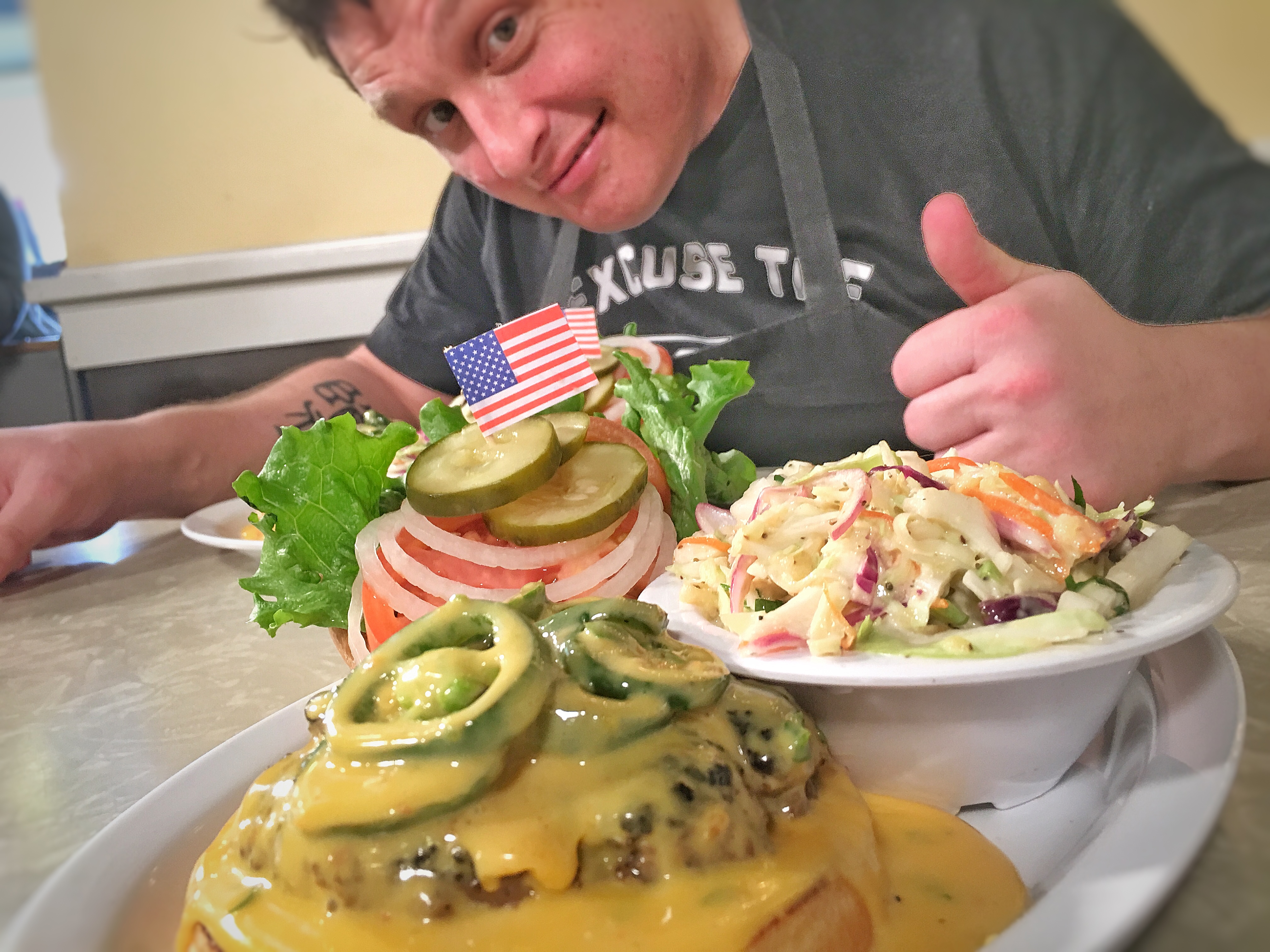 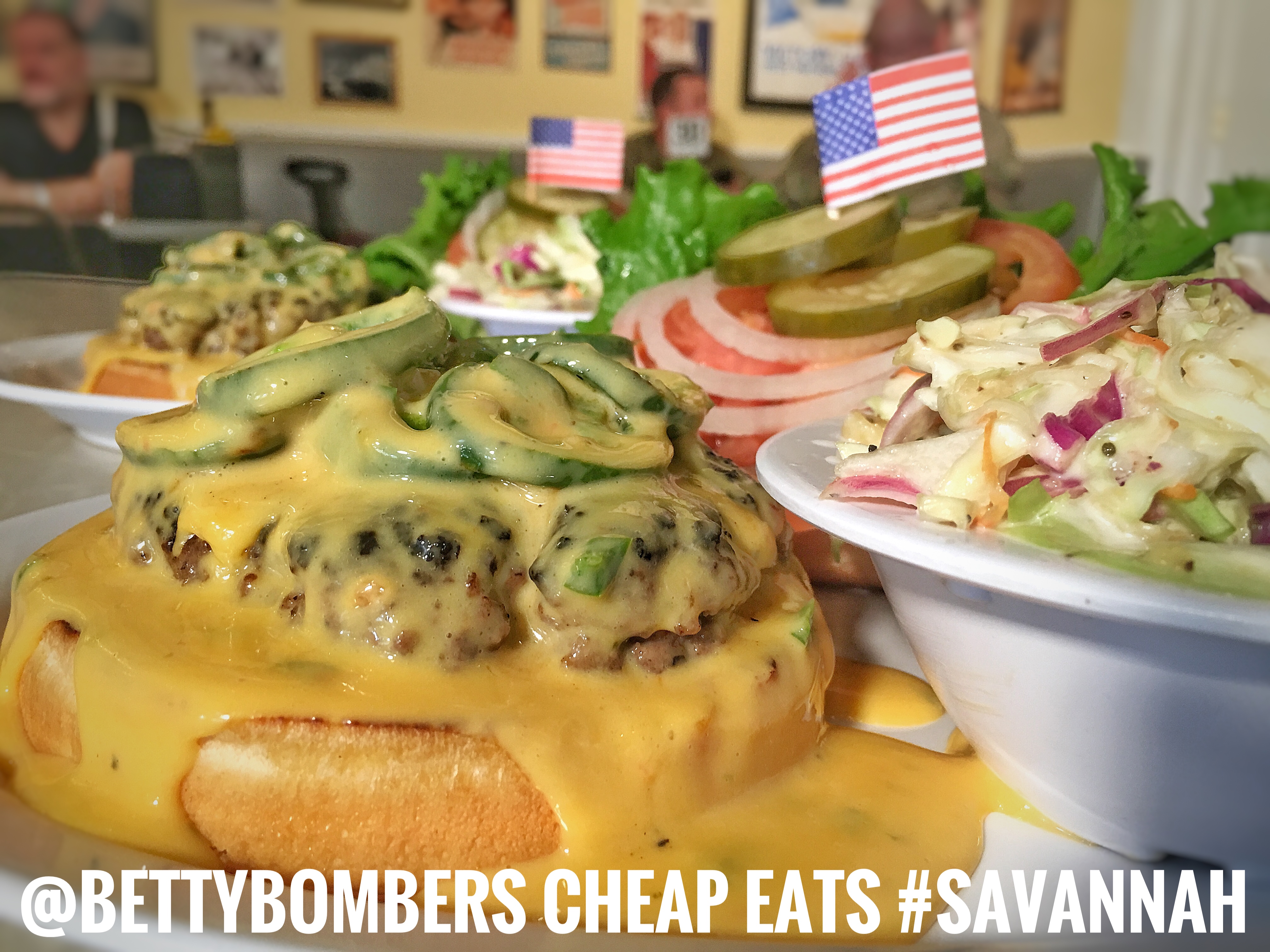 The Vitals:
the spot: Betty Bombers 1108 Bull St. Savannah GA 31401
the eats: Fire in the Hole
the bucks: $9.99
the full nelson: Ordering the burger alone is worth half the price tag

It must be my inner 6 year old self that remains fascinated with all things Army/ Military and war. I can recall vividly digging foxholes in my school’s sandbox, jumping in and screaming “FIRE IN THE HOLE”, so ordering this burger was kind of a nostalgic driven inevitability. That gorgeous pool of yellow you are looking at is queso, and I am rubbing my chin now on how a second taste of Tex Mex ended up in Cheap Eats Savannah but if queso is good on chips . . . you know its gonna be good on a burger. Throw in some jalapeños like Chef Seth Musler did and you have a full on “nacho effect” in burger form. $9.99 not only nets you this cheesy burger with a spicy kick but a side of coleslaw to cool your palate down if the heat becomes overwhelming. I found the hot cheese cooled down the heat from the jalapeños so much that I could rename the burger “brush fire in the hole”. But that just doesn’t resonate with my inner 6 year old. 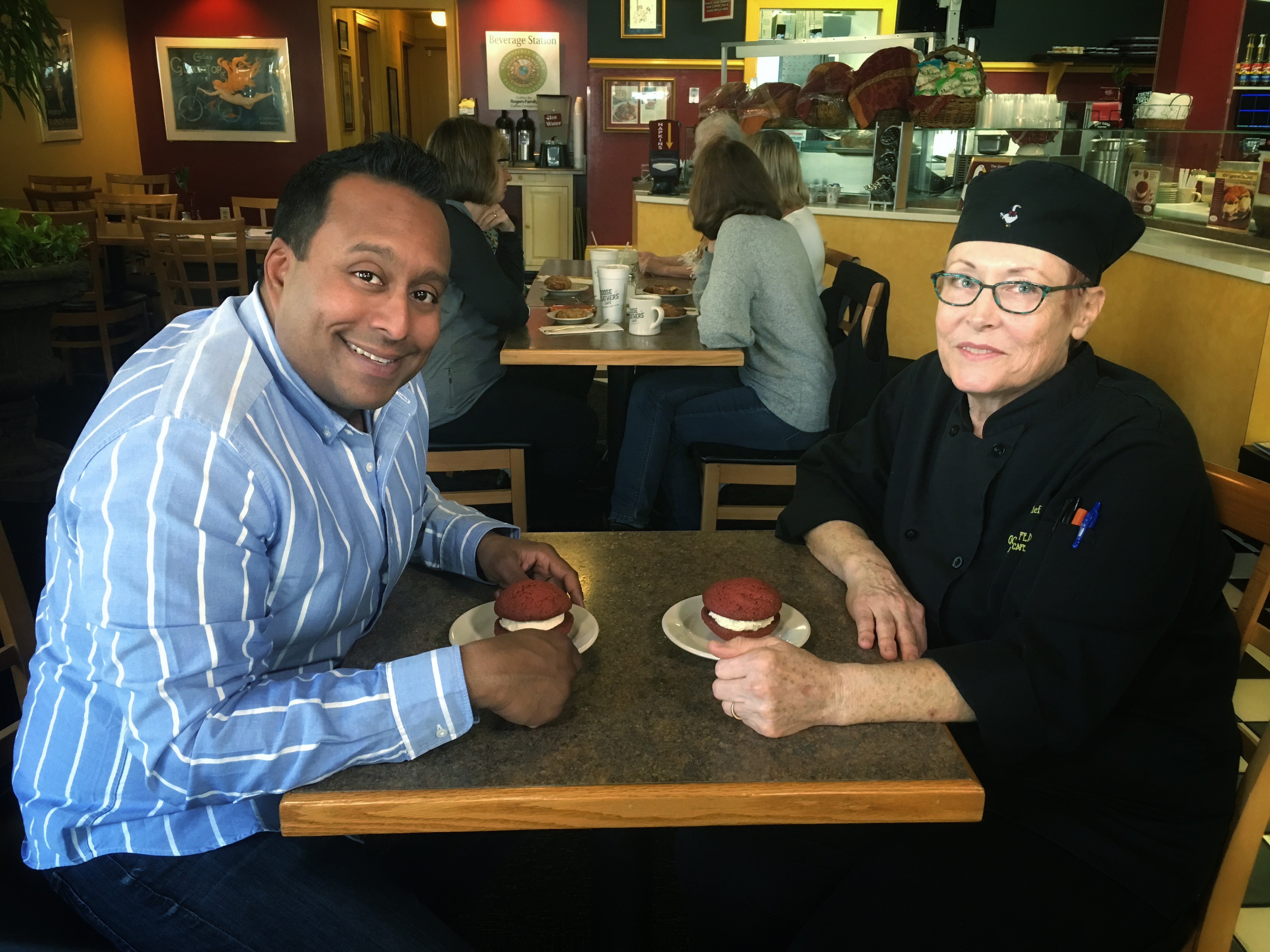 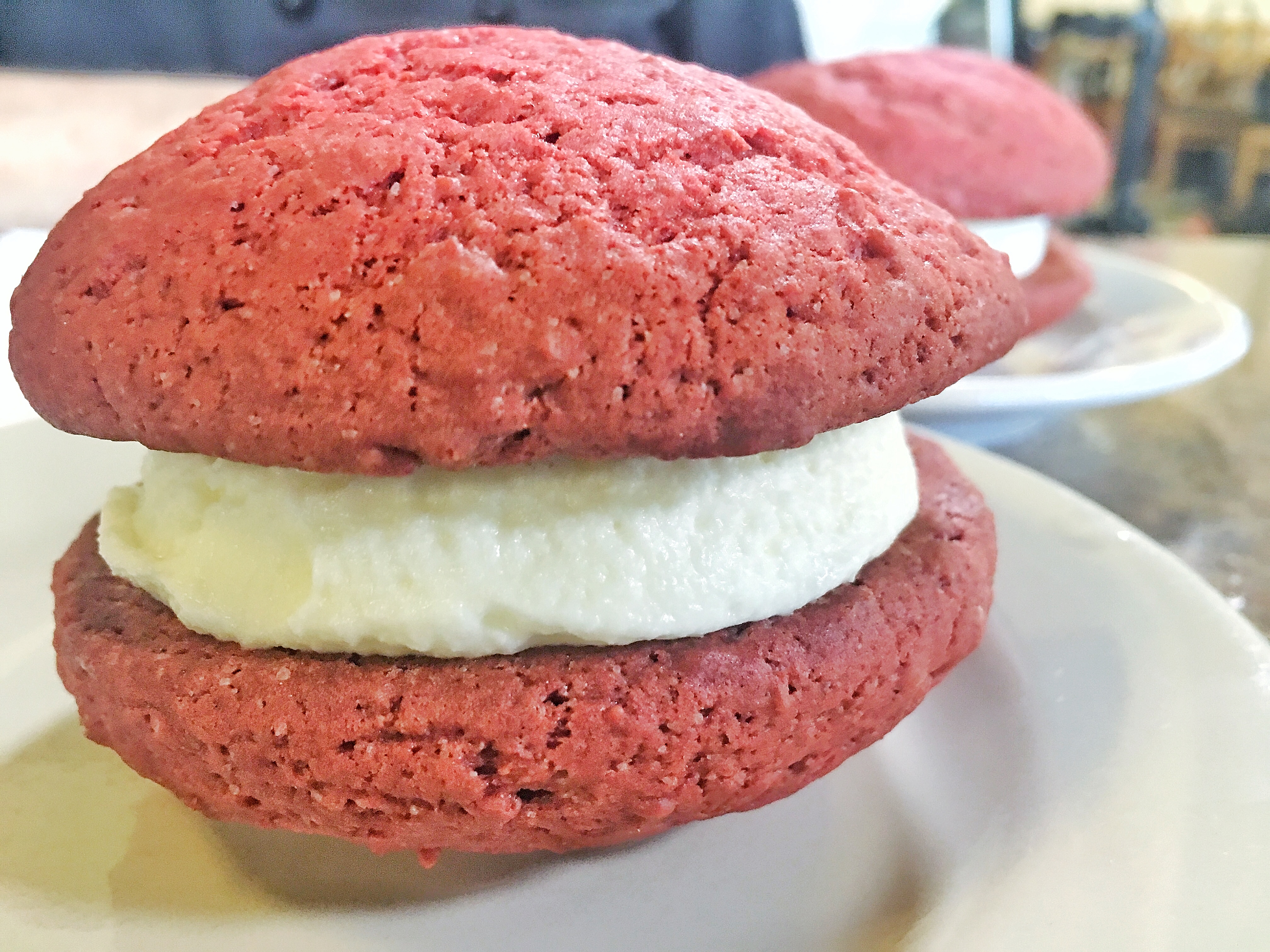 The Vitals:
the spot: Goose Feathers Cafe 39 Barnard St. Savannah GA 31401
the eats: Red Velvet Whoopie Pie
the bucks: $2.99
the full nelson: If only all forms of whoopie came this cheap

Going strong for 32 years now, Goose Feathers Cafe is a Savannah staple. With sweet treats like the Red Velvet Whoopie priced at under $3, Goose Feathers is a Cheap Eats Savannah staple too. I’ve never had a whoopie pie before and when I dug into the history, I came up with more questions than answers. First off, the internet can’t make up its mind on whether the whoopie pie is indeed a pie or a cake or a cookie. My vote is for cookie based on size factor alone. Then there is the origin debate. Multiple places in New England boast that they invented the whoopie pie. Pennsylvania lays claim as well and in the western environs of the state they have an alternate name: “gobs”. Goose Feathers didn’t invent the whoopie pie but making the cookie base out of Red Velvet and using a cream cheese filling vs traditional marshmallow fluff earns them a spot of National recognition in the game changer category for sure, definitely in the Cheap Eats book. Much like Fire in the Hole, just calling this cheap eat out by name is a lot of fun. And when something is named whoopie, fun should be served on the house. 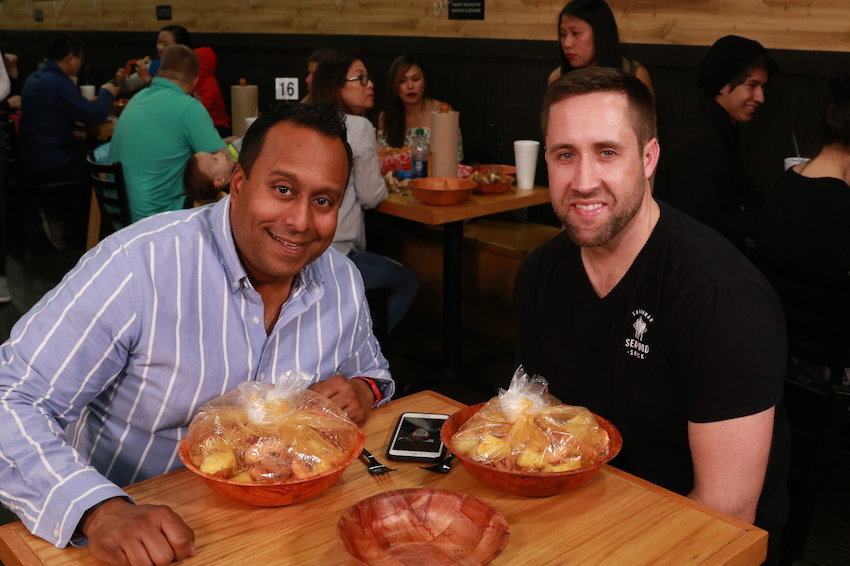 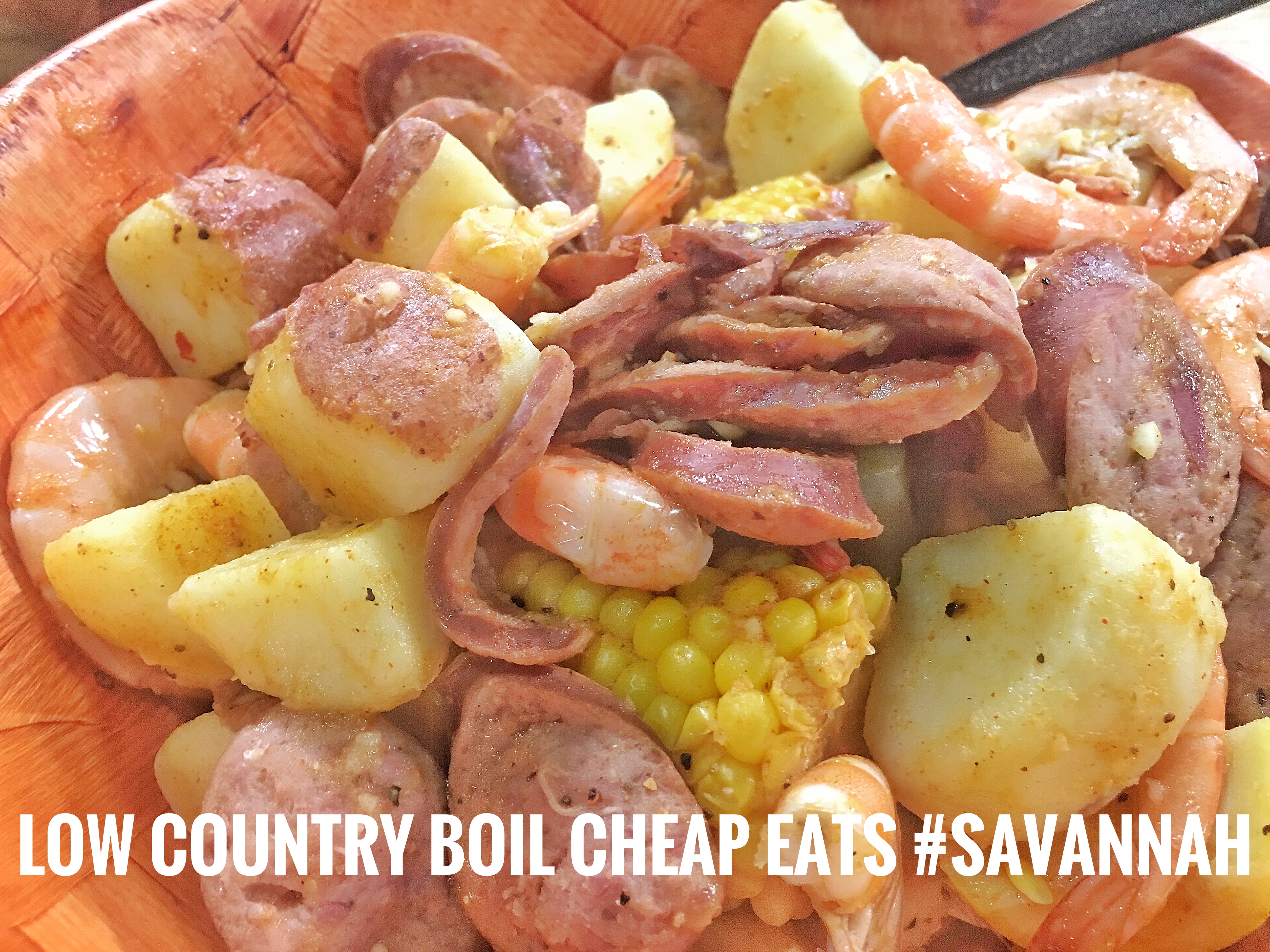 The Vitals:
the spot: Savannah Seafood Shack 116 East Broughton St. Savannah GA 31401
the eats: Low Country Boil
the bucks: $11.95
the full nelson: An honest to God killer seafood shack with Cheap Eats prices up and down the menu

If you look up and down the menu at Savannah Seafood Shack and then taste how good the quality of the seafood is, you should be scratching your head, wondering how Chef David Cutlip does it. The answers lies with his better half: his wife. Christine Cutlip’s family has been in the fishing business for 25 years, which means Savannah Seafood Shack is cutting out the middle man, and serving up serious deals for those looking to close out Cheap Eats Savannah in true seafood style. $12 bucks will get you a feast: the low country boil that’s studded with shrimp, local sausage, corn and potatoes. Yeah, you’re gonna get nice and full from this one, Cheap Eaters. So you know this is a deal but the deal is also fixated on local ingredients. The shrimp come from Georgia when in season, other times from nearby Florida or the Carolinas. The sausage link here is local and all beef. But the game changer is the fact that each ingredient is boiled separately due to different cooking times per ingredient. Does that sound like something out of a scientist’s playbook? Well here is a little fun fact for ya: David was a microbiologist in the Navy. Hey, when it comes to finding a proper dinner to close out Cheap Eats Savannah, sometimes you gotta roll out the big guns or in this case, send out the 5th fleet. 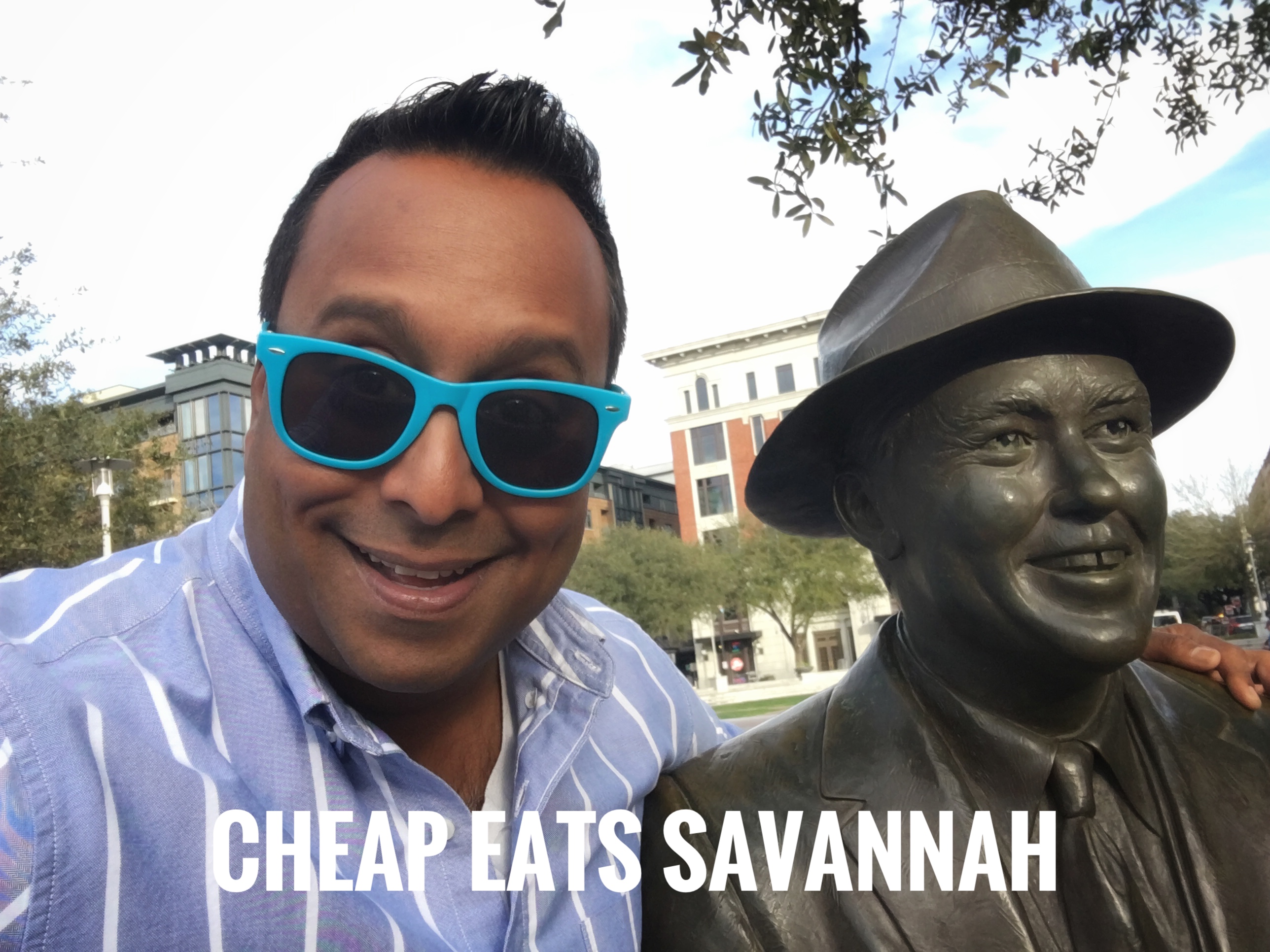 And that is all she wrote for Cheap Eats Savannah! This is a town to put on your travel radar for history + food and with more than a few splurge worthy restaurants in the mix, you can afford to spend an extra day or two with 4 legit places to get your Cheap Eats on! Stay tuned for a post on some of those higher end type spots as well and in the meantime . . . Stay Thrifty my friends!