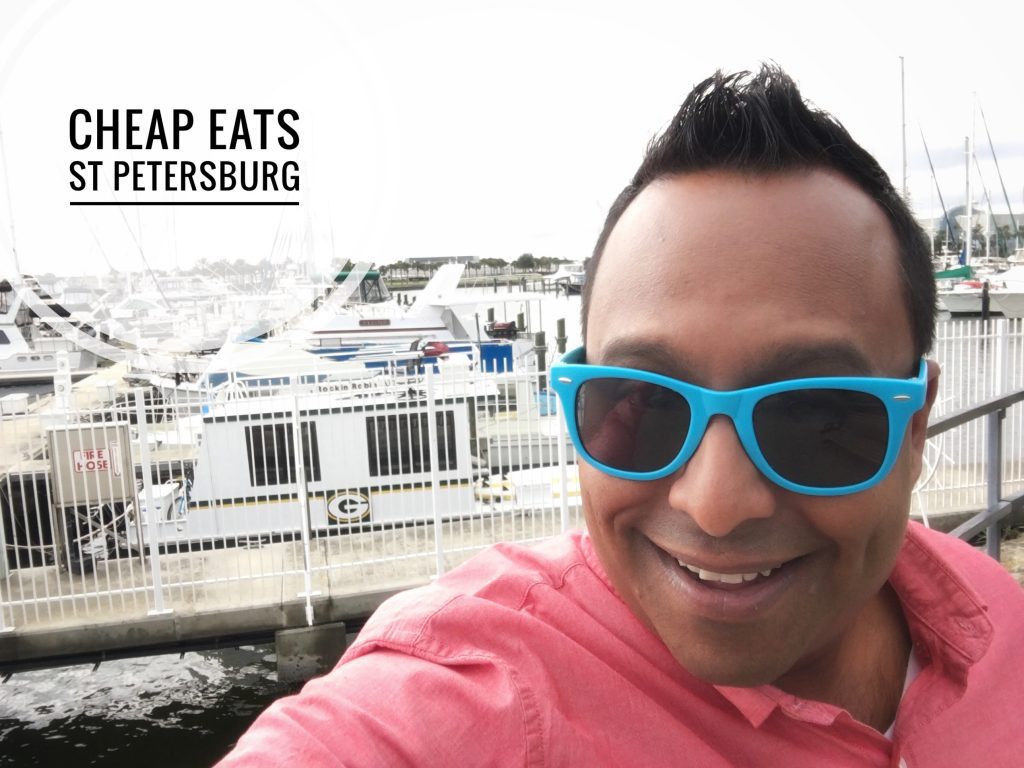 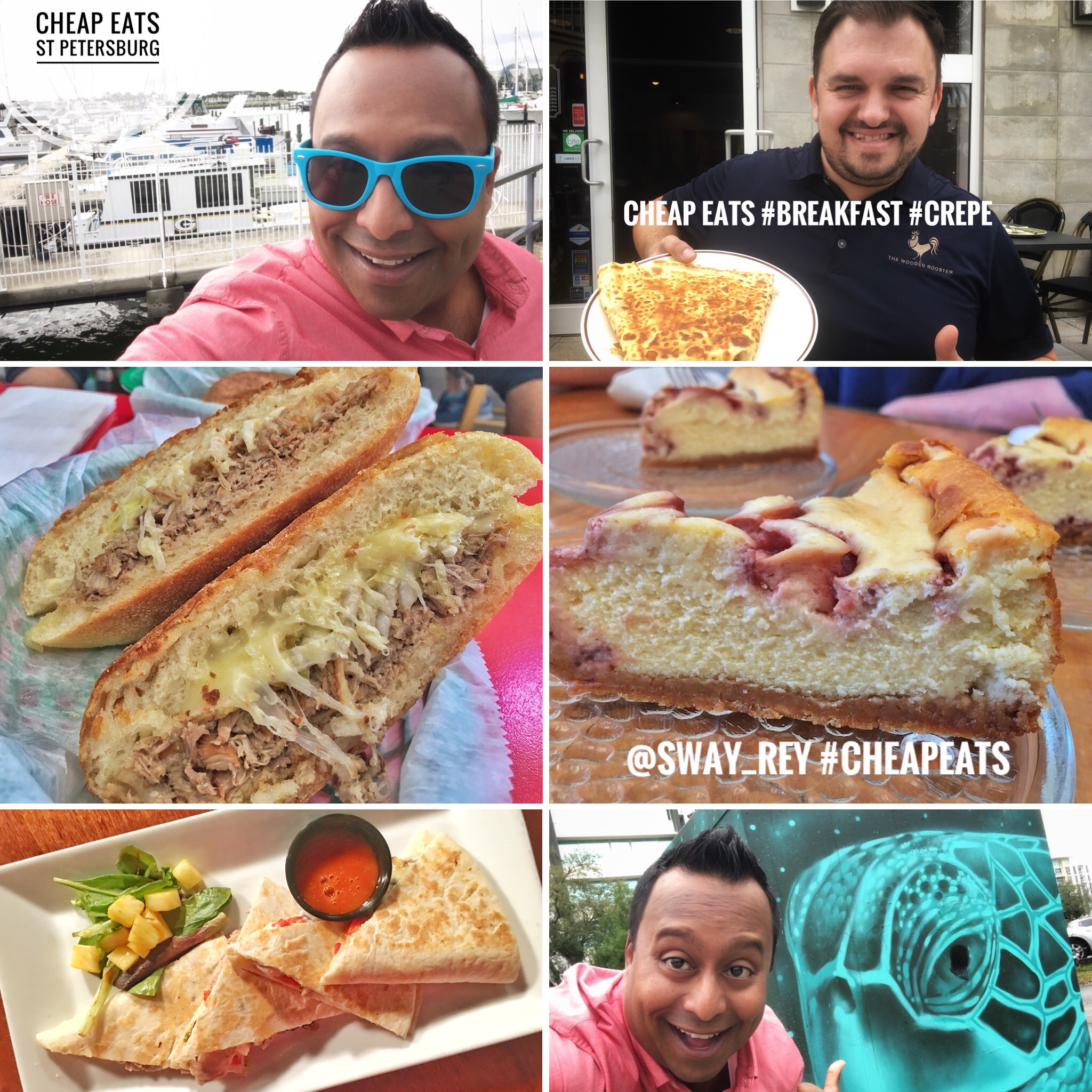 If I had to describe Cheap Eats St. Petersburg in just one word it would be this: surprising. Outside of Miami(where we did an episode of Cheap Eats in Season One) and a summer family trip to Destin in my tender Wonder Years, my knowledge of Florida eats is pretty darn minimal. Take away the heavy Cuban and Caribbean culinary influence in Miami and one might correctly assume that Southern fare becomes a big part of the edible mosaic. But Florida is also part of the East Coast and snowbirds who take refuge down here like to bring their eats with them. This is exactly the case of the aptly named Brooklyn South, our spot for lunch in Cheap Eats St. Petersburg. With that kind of back and forth between major cosmopolitan cities of the Northeast to the sunny environs of FLA, the idea of a legit crêperie doesn’t seem that surprising nor does a swanky dessert themed bar. Add a plate of duck confit quesadilla and I’m sure you would find Cheap Eats St. Petersburg just as surprising as I did. Well seeing is believing, and seeing it twice will make you rethink just which side of Florida you will trek to next and so let’s take one more bite out of Cheap Eats St. Petersburg! 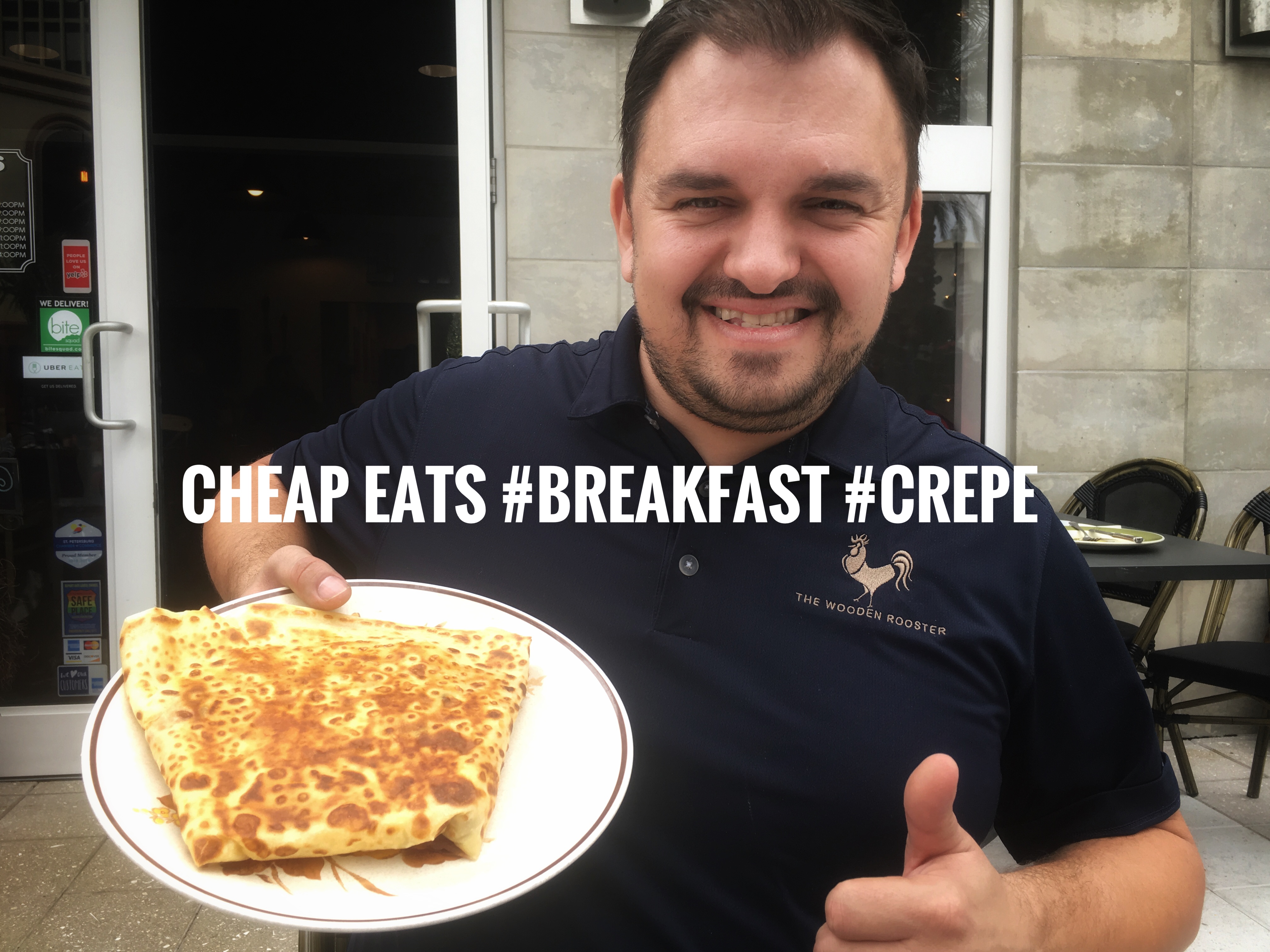 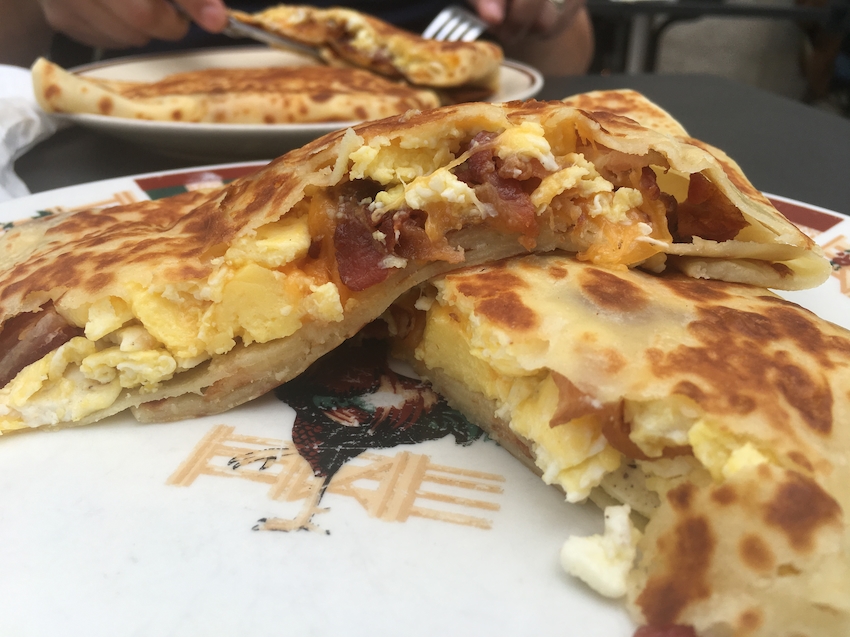 The Vitals:
the spot: The Woodern Rooster 104 2nd Ave NE St. Petersburg FL 33701
the eats: The Full Monty
the bucks: $8.75
the full nelson: breakfast crepes could the new breakfast quesadillas

For some time in the US, French cuisine was the apex of Haute cuisine. Then high end cooking took the leap towards scientific engineered spectacle, regional authenticity began to take center stage of not only European restaurants like Italian but Chinese, Thai and Middle Eastern and a focus on Comfort Food began to drive diners to spending top dollar for luxe burgers and truffle laced mac n cheese. So it makes sense that crêperies never got to trending, which is a shame because talk about an affordable way to get your French eats on. The Wooden Rooster, our breakfast spot for Cheap Eats St. Petersburg is about as affordable as French food gets, considering the fact that they strive to use seasonal fresh ingredients, not one of their crepe combos breaks a $10 spot, and Chef Jeremy Ducult who hails from Burgundy France, went to Culinary school and started cooking professionally at age 14, also appeared on and won Food Network’s Chopped in 2009. So let’s talk about what you’re gonna be eating at the Wooden Rooster: the Full Monty. Upon the first bite one instantly becomes reminded that tortillas aren’t the only way to take down eggs, bacon and cheddar cheese in hand held fashion. For well under $10 you are getting a full plate of breakfast. The star of the show is of course the crêpe and Chef Jeremy’s skills in pouring out the batter and cooking and flipping a paper thin crêpe. The thing about a good crêpe is that somehow a thin layer of dough becomes this slightly sweet, rich and chewy canvass suited for both savory or sweet. The trick is in the flip and believe me you are gonna want a real deal Frenchman working it. I’d pay $10 for Chopped Champion to cook me breakfast, but $8.75 for a two egg with bacon breakfast wrapped up in a crêpe by a true Frenchman? That’s the perfect way to start off Cheap Eats St. Petersburg. 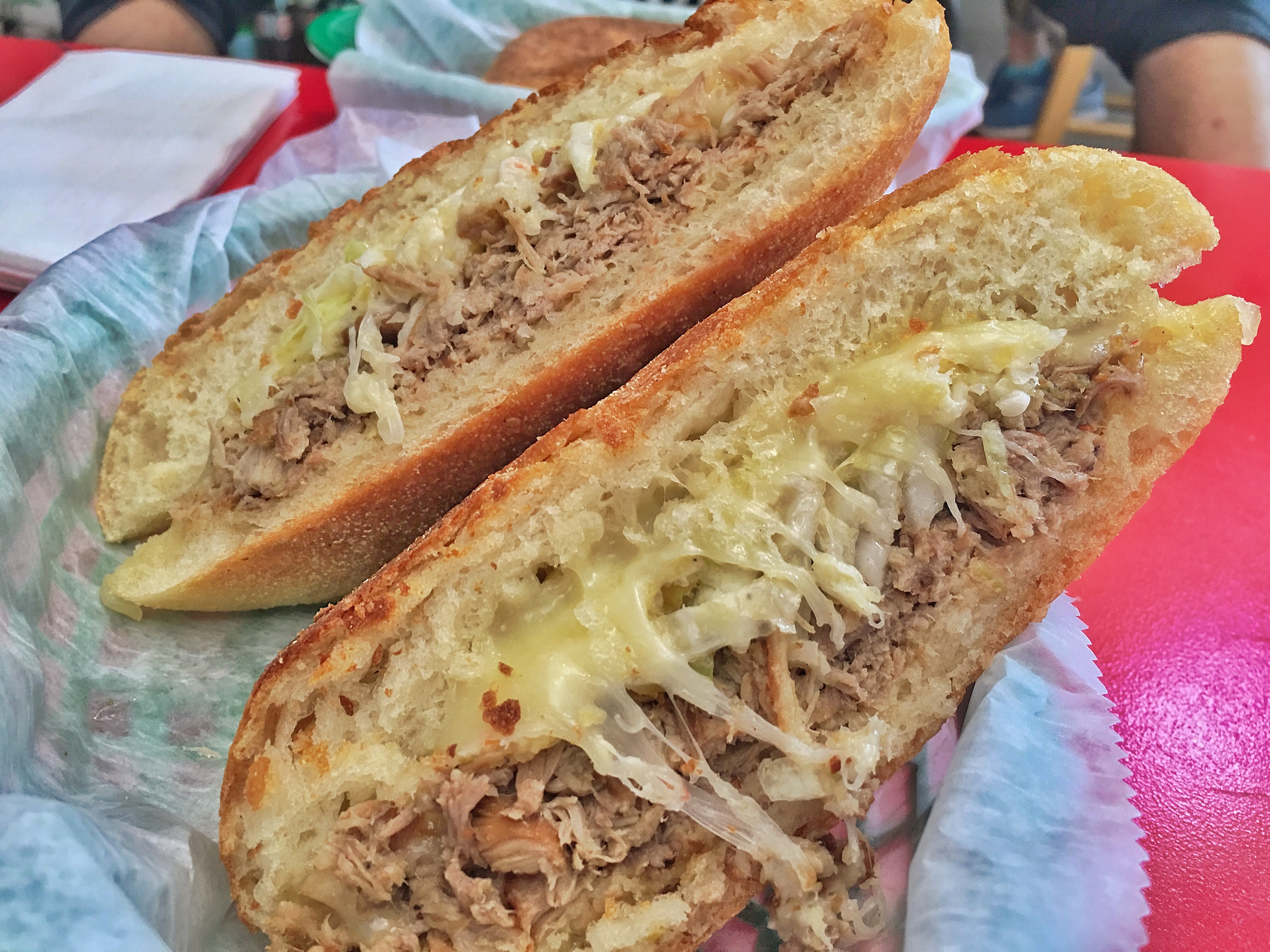 I don’t think there is a 10 commandments of Cheap Eats(yet) but if there was, I would squeeze in a line that great sandwiches come from great cheese shops. It is most certainly the case at Brooklyn South, our lunch find in Cheap Eats St. Petersburg. Started up by a group of cheese heads who used to work at the venerable Murray’s Cheese in NYC, Brooklyn South has cheese that will blow your mind and can blow your wallet. Yes my friends, good cheese can get pricey but sometimes it is soo worth it. Luckily chef and owner Matt Bonano believes in pricing sandwiches for the masses and now enter the pulled pork sandwich. It seems like I have had my fair share of pulled pork lately but the name is a bit of a misnomer. This is more of a pork pot roast: pork shoulder is braised for hours before being cooled, shredded and then placed back in the same pot with the remaining stock to simmer until the liquid is absorbed. For the record, I just ate three carnitas tacos and a piece of pepperoni pizza a little while ago and I still get hungry just thinking about Chef Bonano’s mouth watering process. Of course Chef Bonano finds the perfect cheese to pair: Monterey Jack, uses plenty of it and it gets good ‘n melty. The bread comes from a local bakery so expect a firm crust and chewy center. Brooklyn South was certainly a find for Cheap Eats St. Petersburg but if I lived in St. Pete, I could see myself eating here at least once a week. Sammies that are hearty, feature perfect cheese pairings and come on fresh bread baked daily . . . straight up Cheap Eaters . . . I could eat at Brooklyn South for dinner. 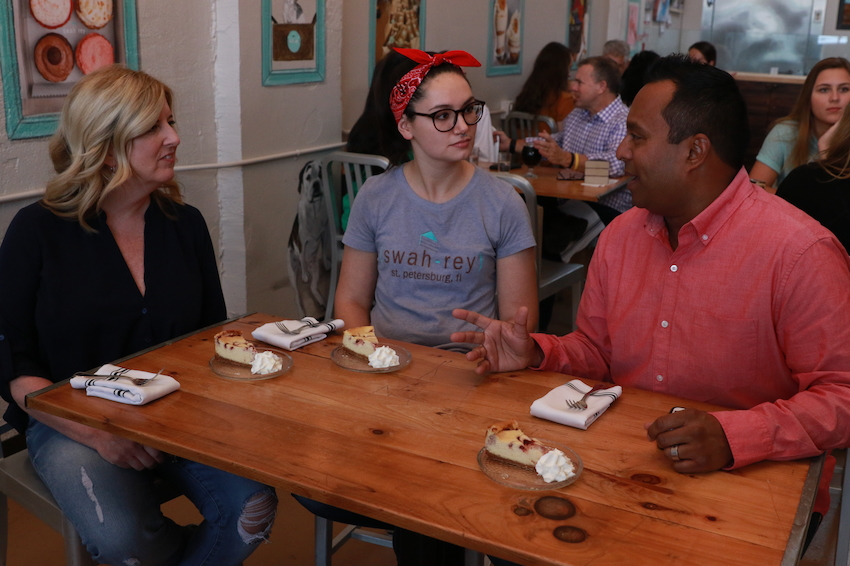 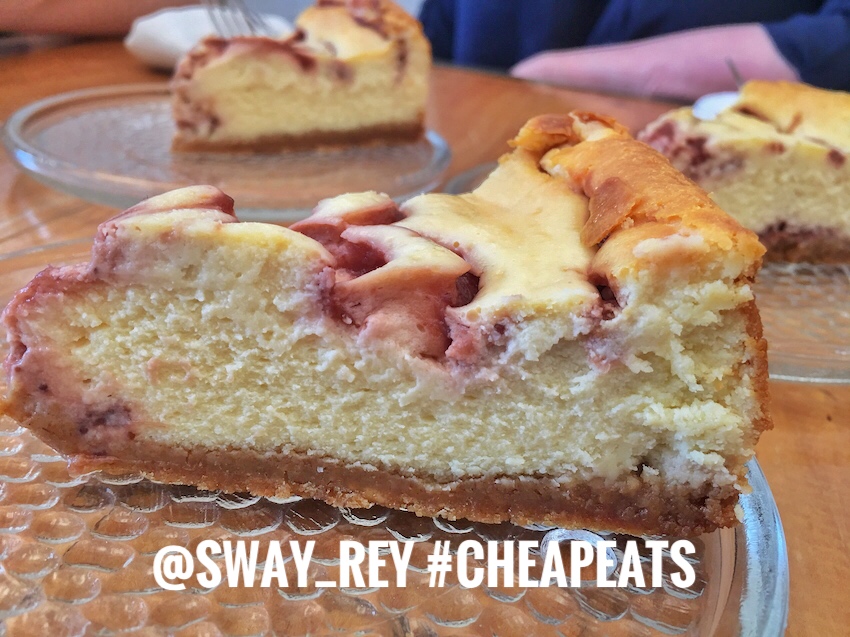 The Vitals:
the spot: Sway-Rey 2105 Central Ave St. Petersburg FL 33713
the eats: Berry White Cheesecake
the bucks: $3
the full nelson: you would think Barry White would have ordered the chocolate . . .

A dessert only bar sounds like a place one would only find in New York or San Francisco back in the day, but we are deep into a coast to coast food revolution where niche eateries can be found tucked away in corners like St Pete. But at $4 for a slice of decadent cheesecake getting tossed between berry reduction and a white chocolate and graham cracker crust? That my friends is a killer snack find for Cheap Eats St. Petersburg. Sway-Rey made making my Cheap Eats budget look like shooting fish in a barrel but making that cheesecake? Not so easy unless you happen to have a pastry chef like Anya working in your kitchen. Keep an eye out for this young chef and a CIA grad with a knack for sweets; something tells me someday soon she might be cooking up a soirée of her own. 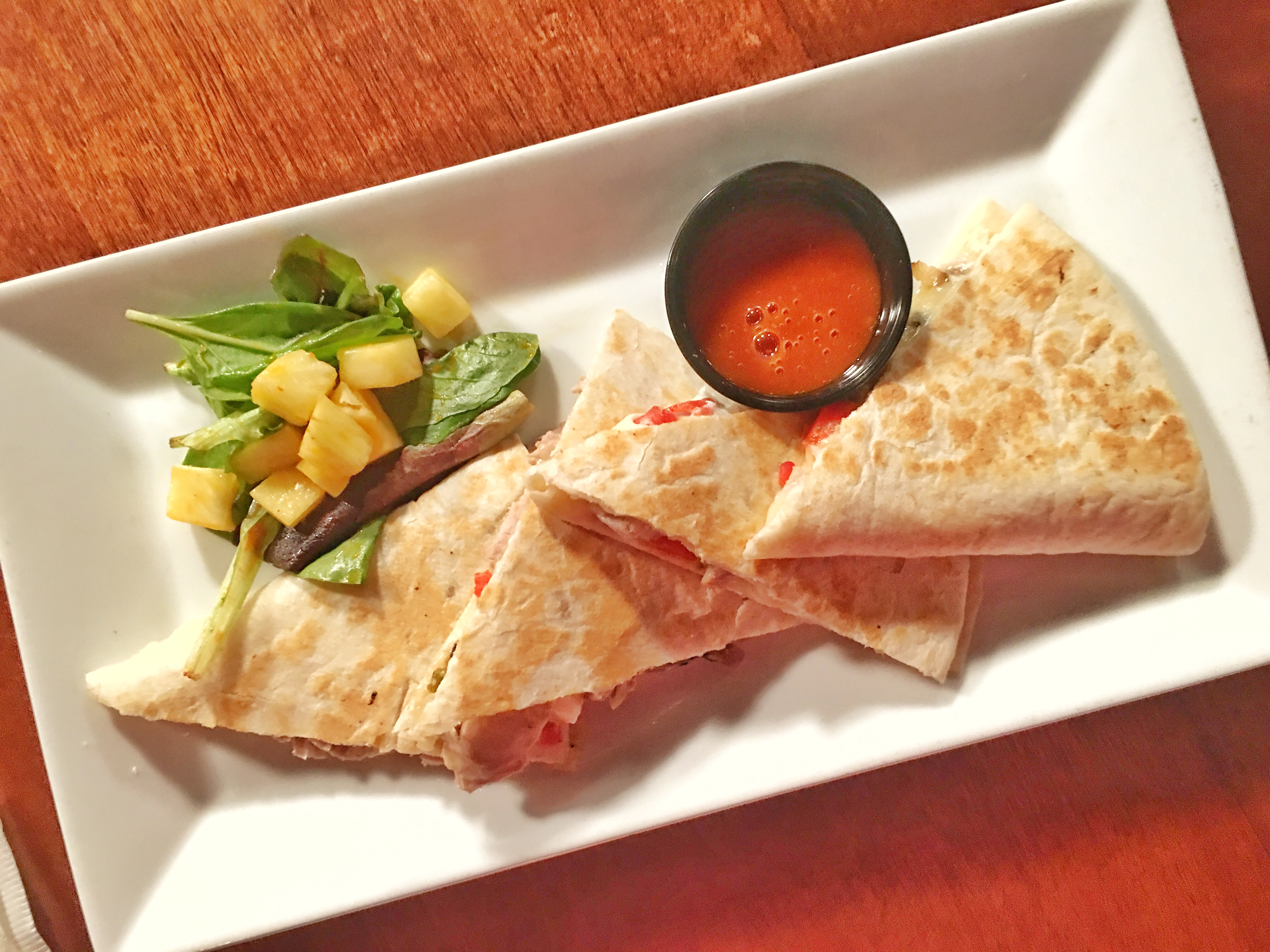 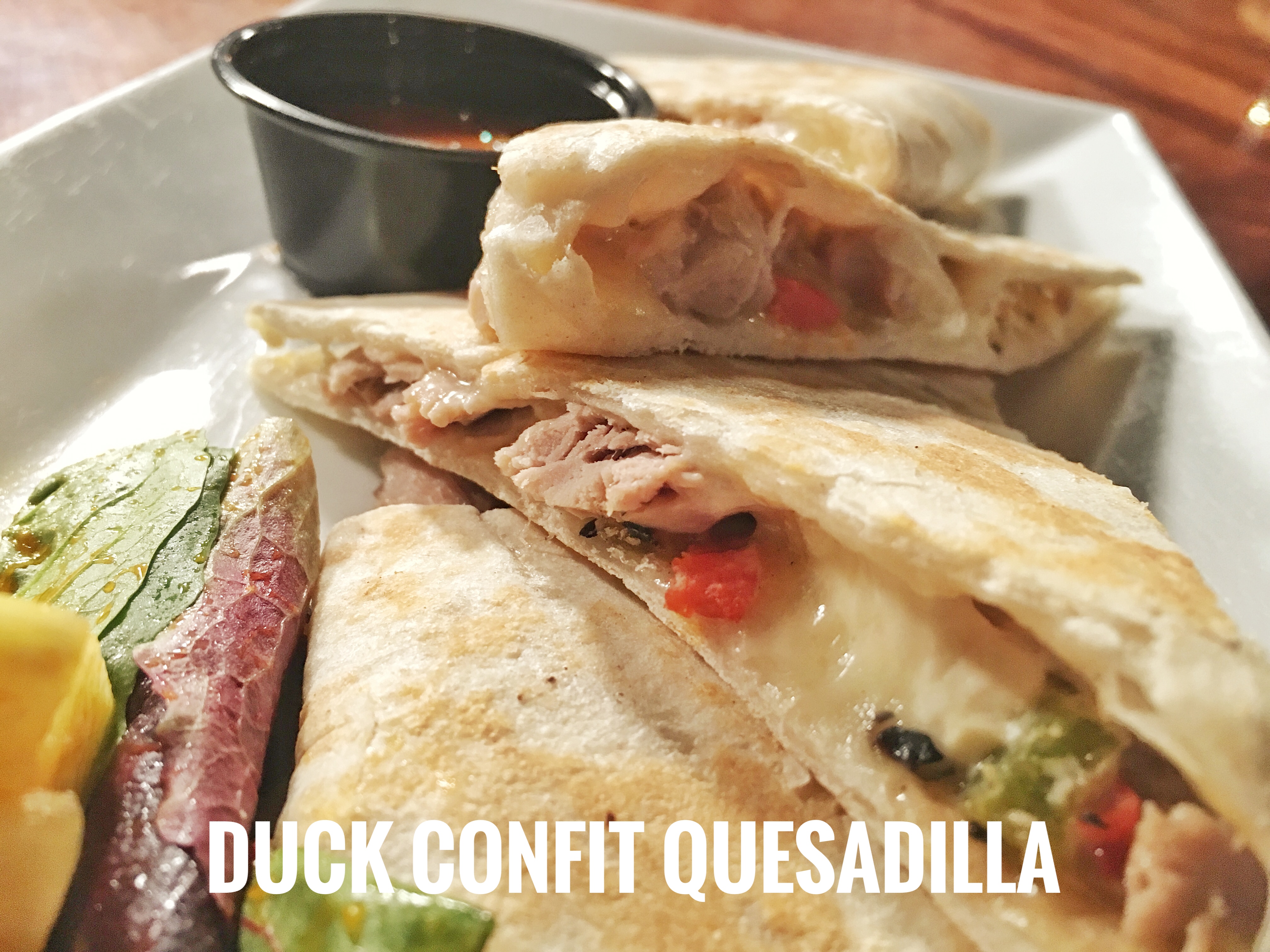 Meeting chef Chris Fernandez at Red Mesa Cantina gave me incredible insight to not only the food scene of Cheap Eats St. Petersburg but of the evolving fine dining scene here as well. From local chefs cooking up pasta at the James Beard Foundation to wine bars serving up grilled octopus and fine dining burgers; if you bring a little coin, you can get down for dinner in St. Pete. But the hunt is squarely for Cheap Eats, St. Petersburg, which means daddy is on a budget, which means a big fat quesadilla may just have to do. Well, not just any old quesadilla: a duck confit quesadilla. For the uninitiated, duck confit is duck slowly cooked in its own fat at a low temperature, around 200 degrees, sometimes less. Think of it as a kinder and more gentle deep fat fry, like low ‘n slow barbecue but with oil instead of smoke. Chef Chris takes duck thighs and brines them with soy and oranges, before cooking them off. As far as cheese goes, forget the traditional. Chris goes with goat cheese where the tartness pairs well with the gamey flavor of duck. He also adds some Jack to keeps things in place and in lieu of salsa goes with a chipotle vinaigrette. All in all not your average quesadilla but certainly one that speaks to the fine dining scene in St Pete and when priced at just $12; makes for a winner of a dinner for Cheap Eats St. Petersburg. 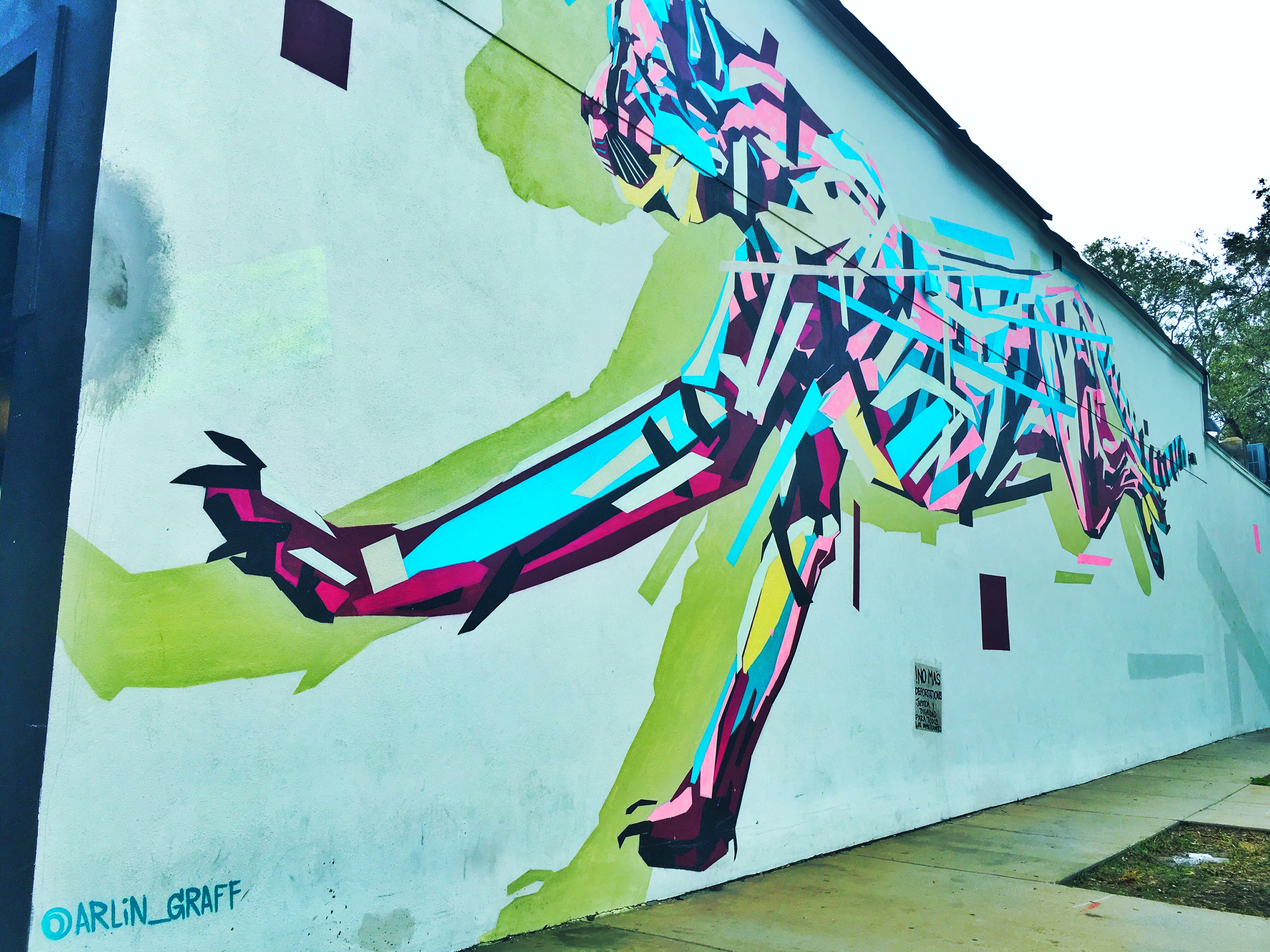 And that was Cheap Eats St. Petersburg! From quesadillas stuffed with two egg breakfasts to $4 cheesecakes to duck confit quesadillas to a gourmet cheese shop with a killer sandwich program, expect the unexpected when hunting for Cheap Eats in St. Pete! This funky little town is giving the Atlantic side of Florida a little reason to be “Gulf envious” and at these prices, it doesn’t surprise me one bit. Hands down I got a new warm weather destination: St. Pete and I will definitely come hungry for the Cheap Eats!