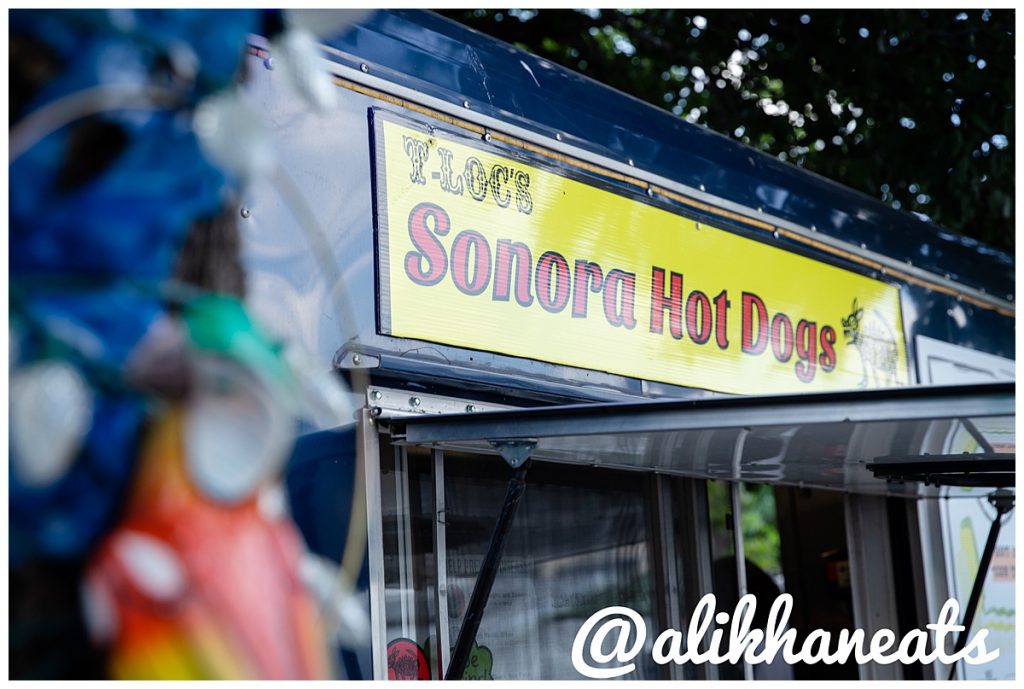 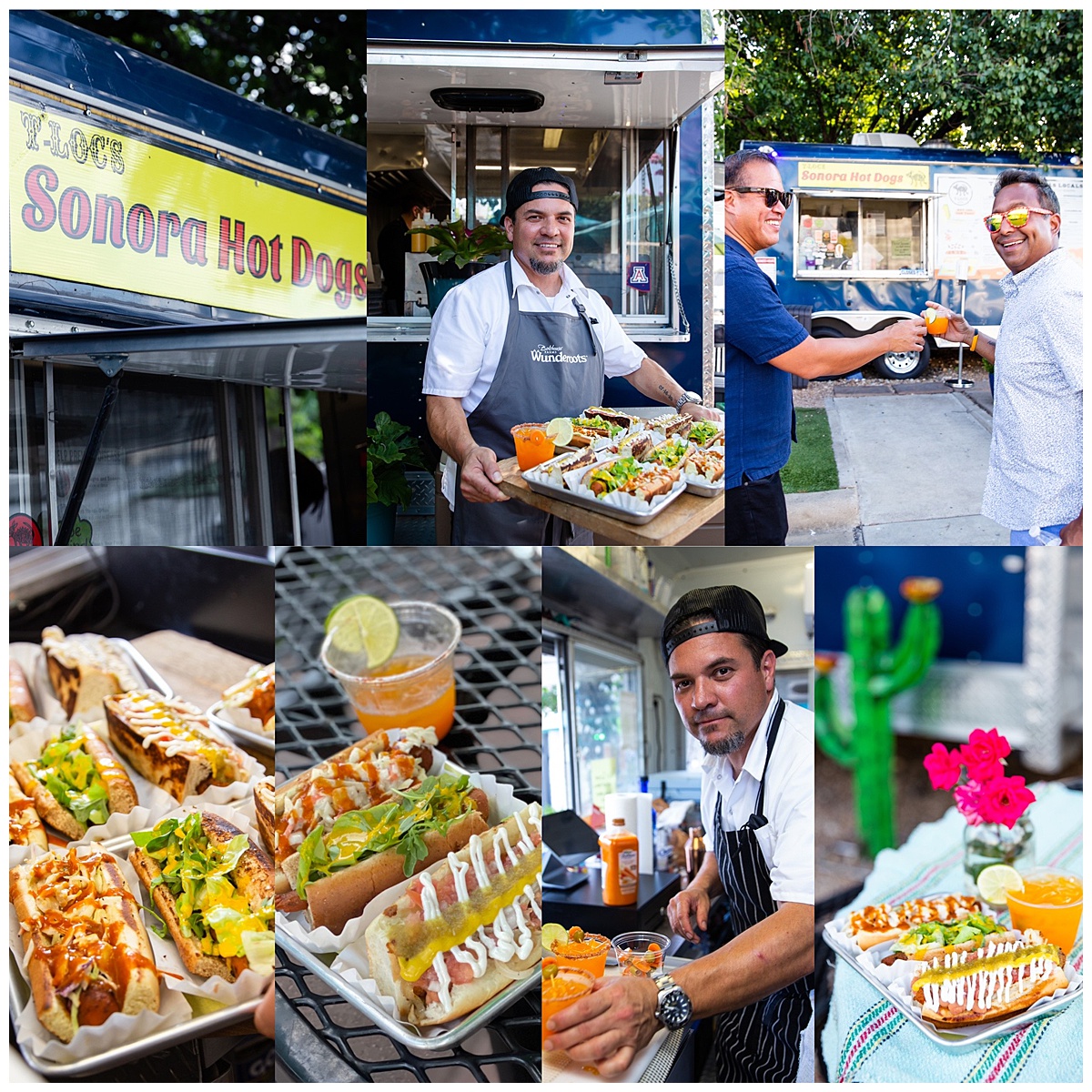 Who let the dogs out?

T-Loc’s did, that’s who. But before we get into all that I feel like I need to let you all in on a little secret: Hotdogs are my kryptonite! More often than not, when it comes to tubesteaks I’ll take a hard pass. This is especially true for loaded dogs.

Are there exceptions? Heck yes and I’ll mention Dave’s Dogs from Cheap Eats Santa Barbara as a truly special exception. My man Dave can load up a dog, but rather than overload it with salty meat goodness, Dave seeks to strike balance by adding contrasting flavors. This flavor combo of complexity is the saviour of any loaded dog when it comes to the true blue gourmand’s palate.

And there happens to be a maestro of that caliber running a truck/trailer in Austin TX. His spot is T-Loc’s and I’m loco for Chef Miguel Kaiser’s elevated grub. 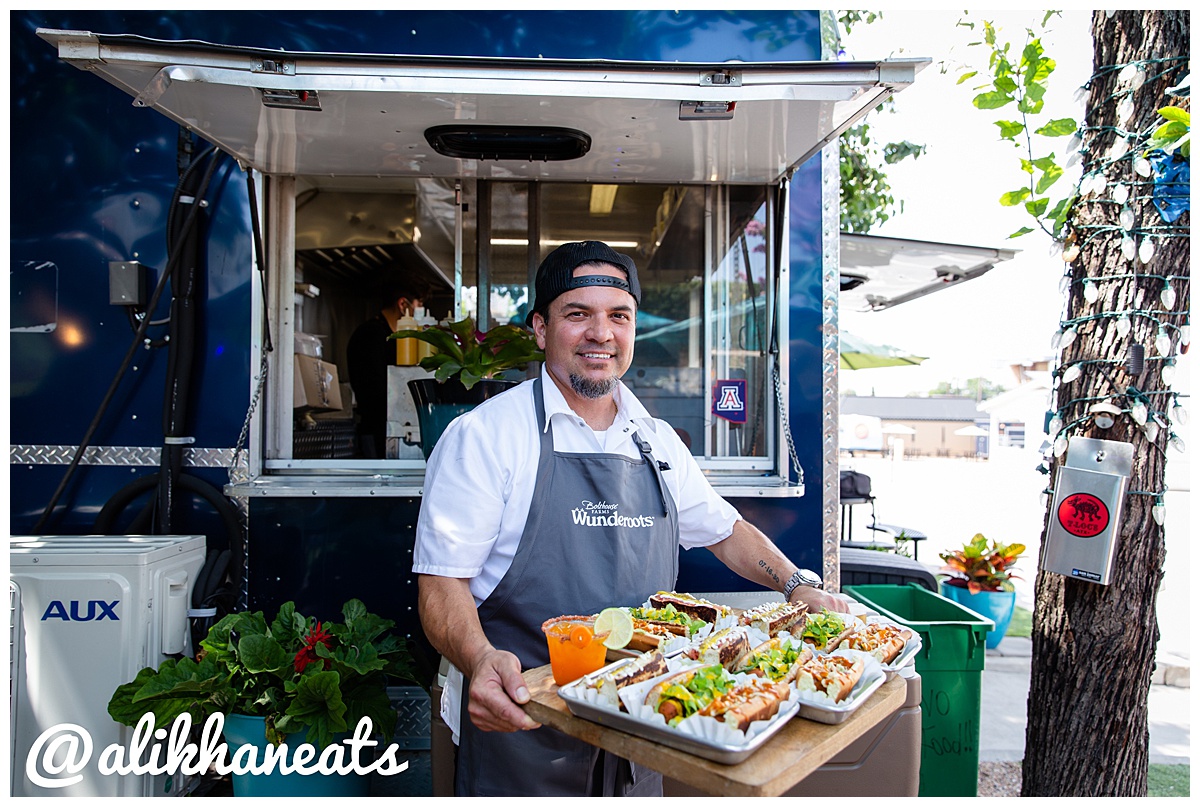 If Jiro Ono dreams of sushi, then Miguel Kaiser dreams of hot dogs. That’s certainly the case now as he is currently in his seventh year of operating T-Loc’s Sonoran Hot Dogs and Street food, a food trailer in Austin along with his partner Zulma Nataren. But was Miguel always dreaming of hot dogs? Definitely in his youth when he was growing up in Tucson, AZ. Tucson could be considered the capital of Sonoran style hot dogs on this side of the border.

This might beg the question from some of you: what exactly is a Sonoran Style Hot Dog? 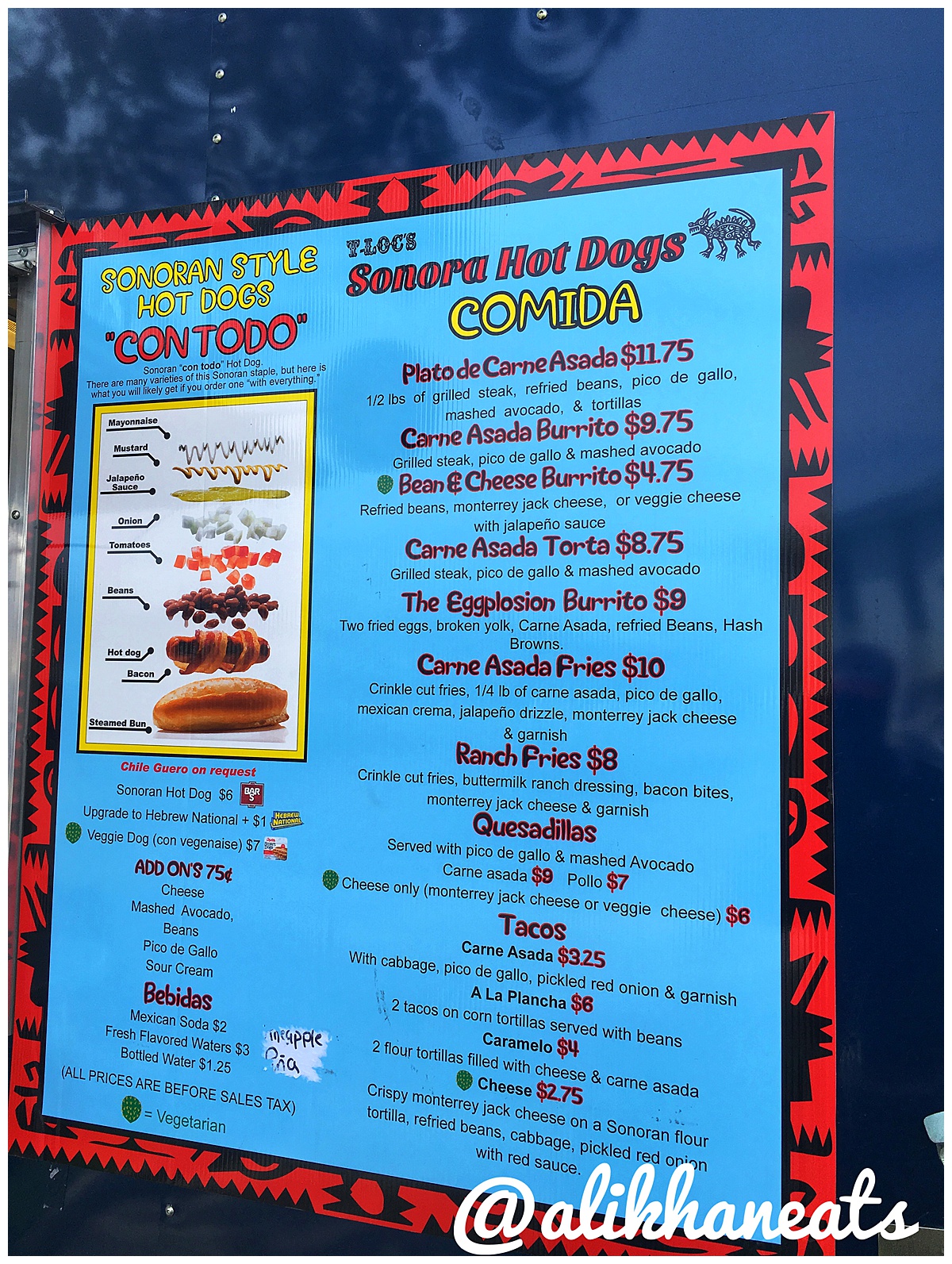 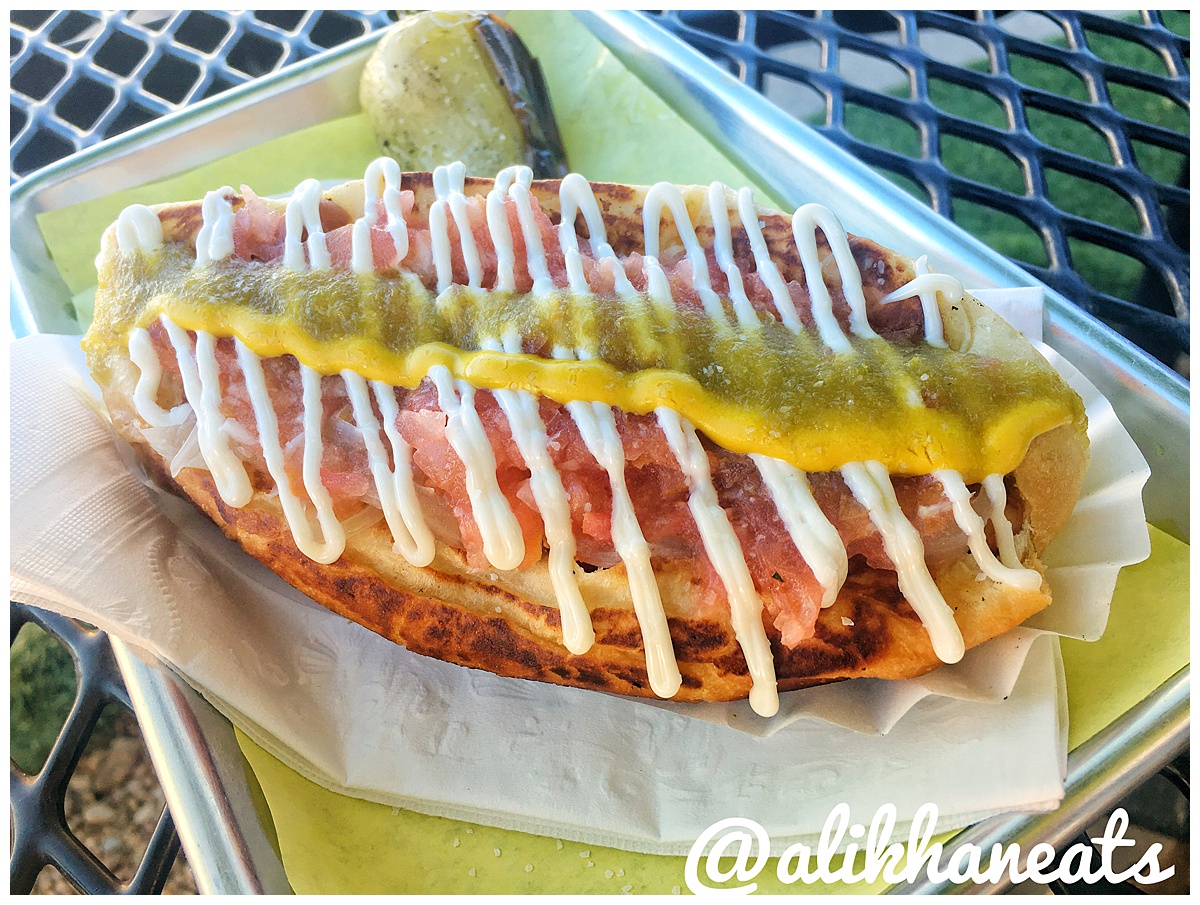 Look carefully at the upper lefthand corner of the menu and you’ll see the Sonoran Hot Dog breakdown. Spoiler alert: it’s all about toppings. A special bun that T-Loc’s ships out from a bakery in Tucson is the bed for this bevy of toppings. A bacon wrapped hot dog takes a seat on the bun followed by pinto beans, diced onion and tomato, jalapeño sauce, yellow mustard and mayo. Spicy, salty, juicy, tart, filling and it’s all so damn epic. 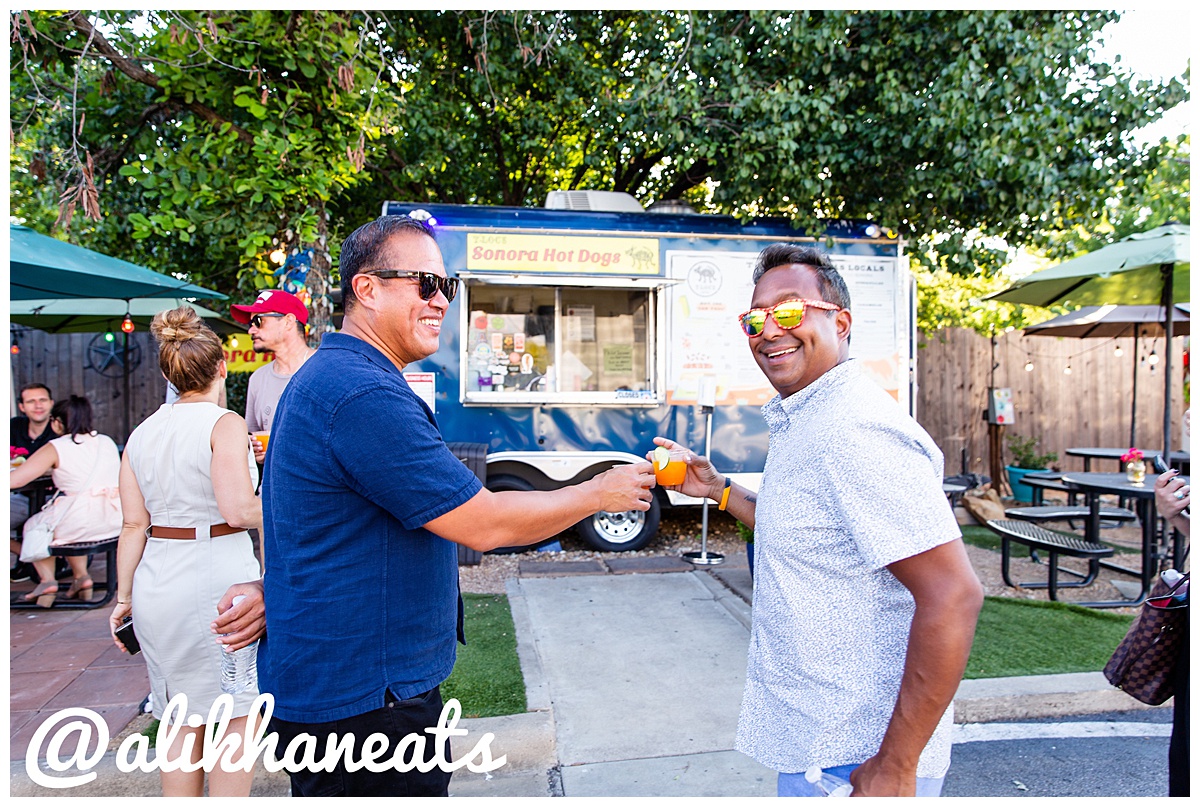 I’ll say it again: I pretty much hate hot dogs but I’ll make an exception for this one and give it my fist bump/cocktail bump. The toppings and the flavor contrast make the meal, kinda like a Chicago Dog. But make no mistake this is Sonora all day.

It should be worth noting that yes, this hot dog style is a gift from Mexican immigrants from Sonora who started selling them in Tucson. Now I have had plenty of bacon wrapped dogs in LA, also known as TJ style dogs, but the bun and the precision layering of toppings makes Sonora style, particularly T-Loc’s rendition, a total standout. 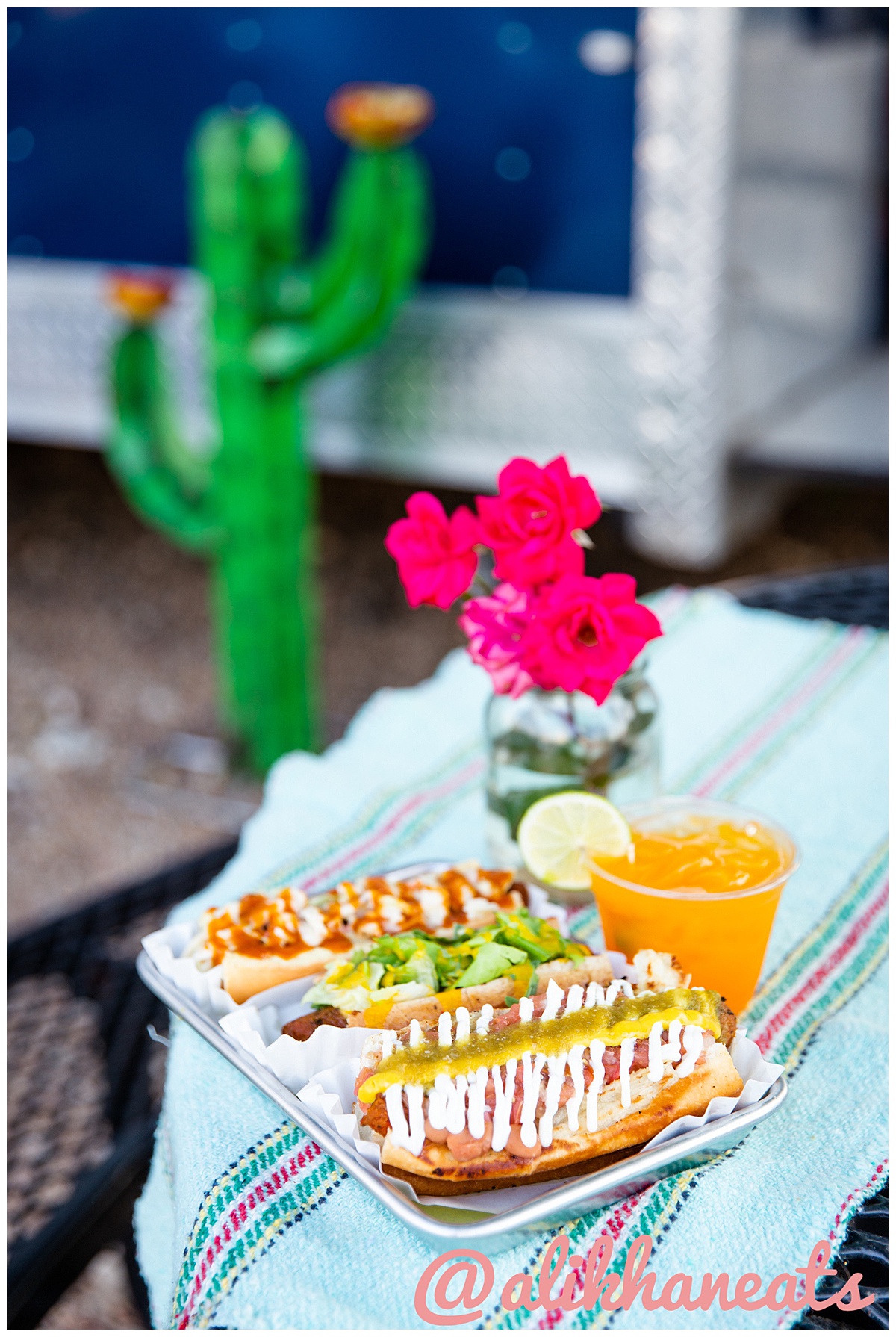 Even though Sonoran style dogs are steeped in tradition, Chef Miguel is an innovator. Recently I was invited to a pop up with T-Loc’s and Wunderoot/Bolthouse Farms. Here Chef Miguel used roasted carrots with particular flavors in lieu of a traditional hot dog. Now I’m not big meat substitute guy(duh), but I certainly appreciate and partake in eating vegetables. Call me crazy but I don’t want to keel over and die before I’m 50. 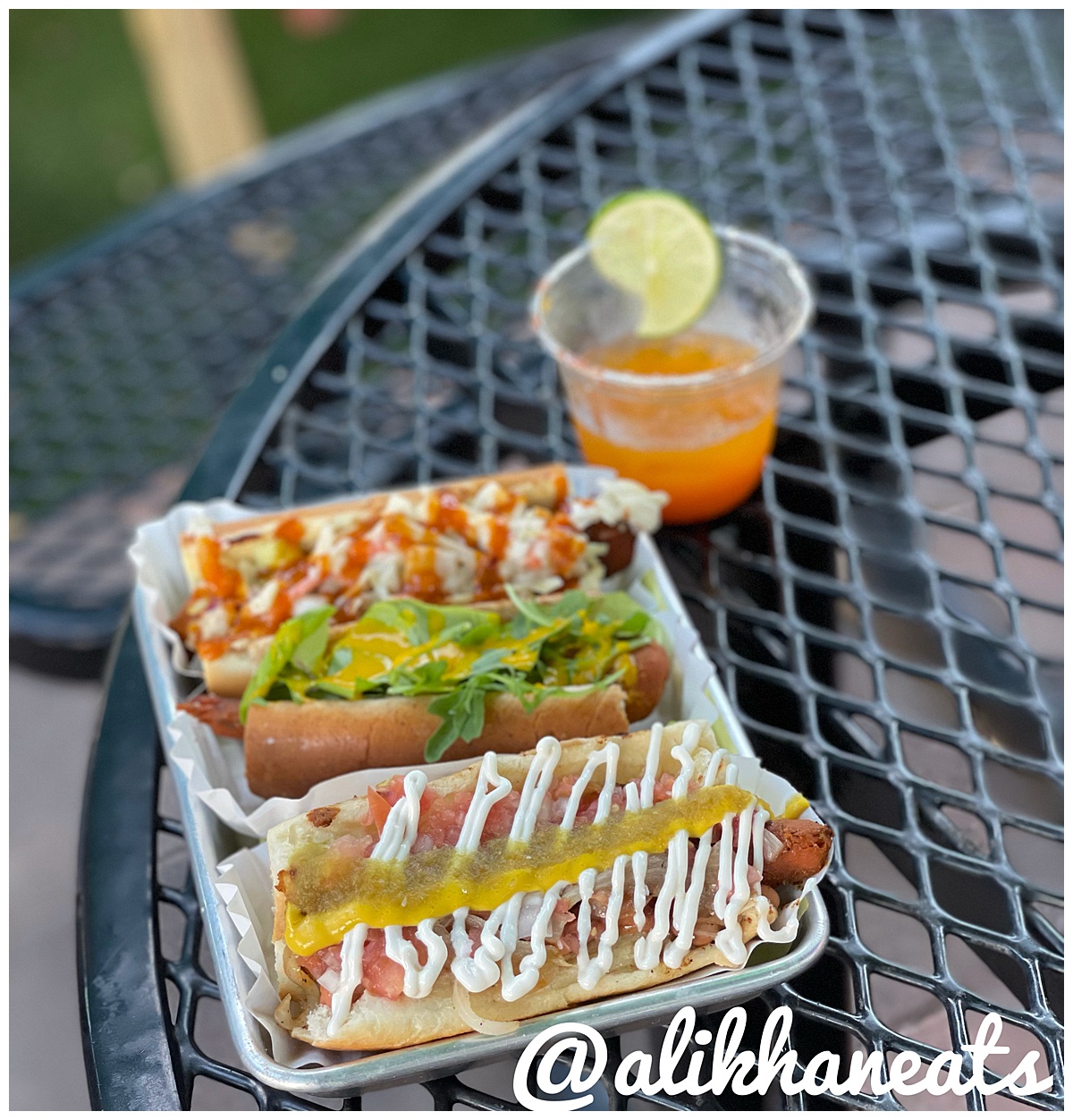 Better than plant based: just plants

What’s cool about these “hot dogs” is that they’re literally just roasted carrots versus some chopped up and reformed thing (McRib anyone?)  It’s a far easier ask for me to eat vegetables than pretend that the vegetable is some kind of meat. I mean, let’s just be real about that.

That secret sauce to making it all work is what Miguel puts in toppings wise. You already know about the Sonora Style, the other two are a chorizo and an italian “sausage”. For the chorizo, Chef Miguel contrast the spicy “sausage” with crisp coleslaw and bbq sauce. While those toppings aren’t typically out of the norm for loaded dogs, BBQ sauce is far more interesting on a roasted carrot than an actual chorizo link. The Italian “sausage” gets hit with arugula and a spicy carrot vinaigrette. Named the hipster, I was least keen on this. Chalk it up to being in your 40s I guess. 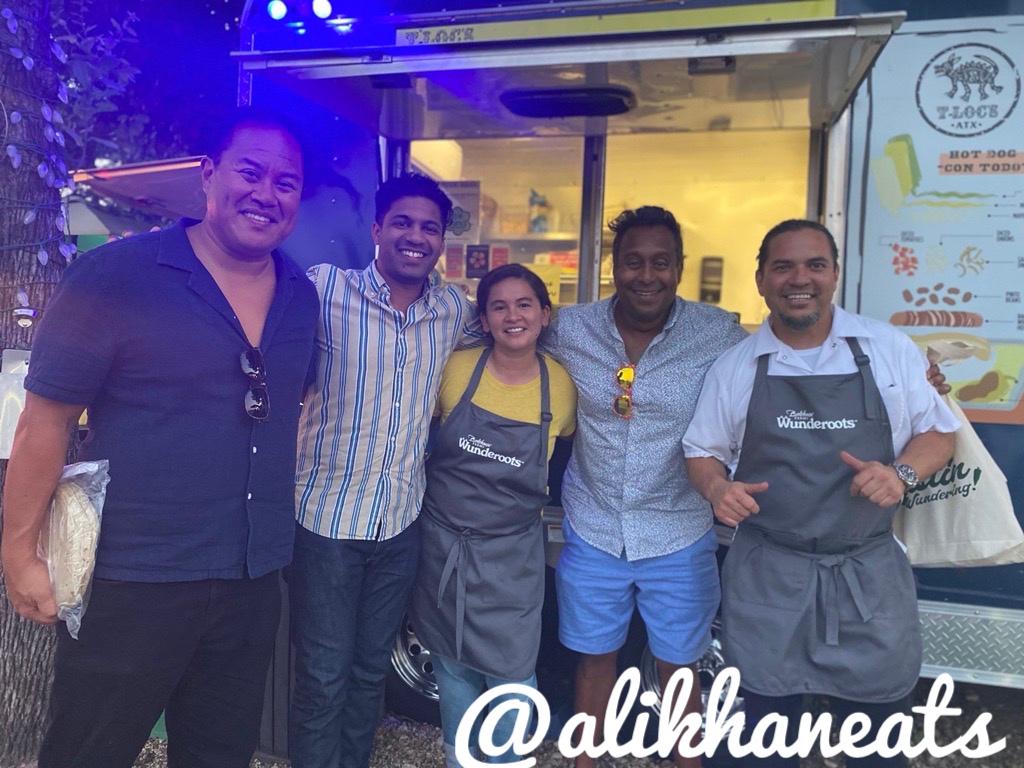 Come for the dogs, come back for Chef Miguel

T-Loc’s is Chef Miguel’s muse. Yes, it’s the spot to get a legit Sonoran Style Dog in Austin whether at the food truck or at Q2 stadium(where Austin FC plays). But it’s all about a guy who trained at the Culinary Institute of America, interned Per Se, one of the most celebrated restaurants in the country yet focuses on food that can be appreciated by anybody and everybody. If Cheap Eats rolled back into Austin, T-Loc’s would be a slam dunk.

And the best part? I didn’t even get to tell you about his carne asada fries. Literally . . . stay tuned.

PS: He will be giving away FREE DOGS July 4th weekend and July 9-11.

One response to “T-Loc’s ~ Austin TX”