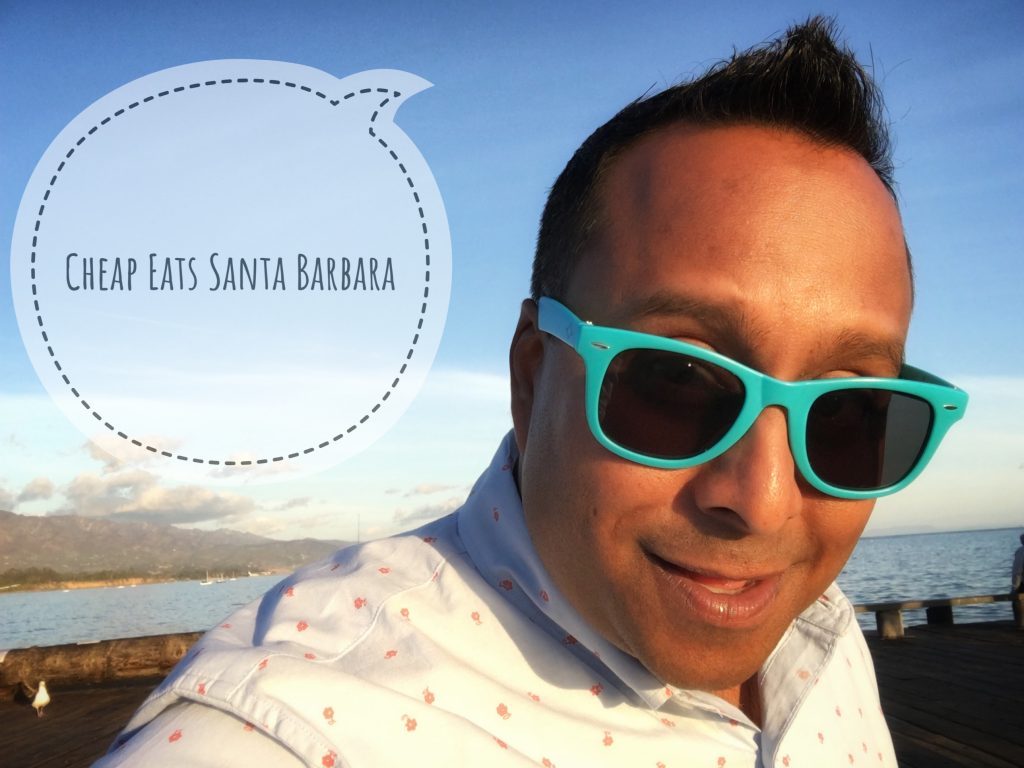 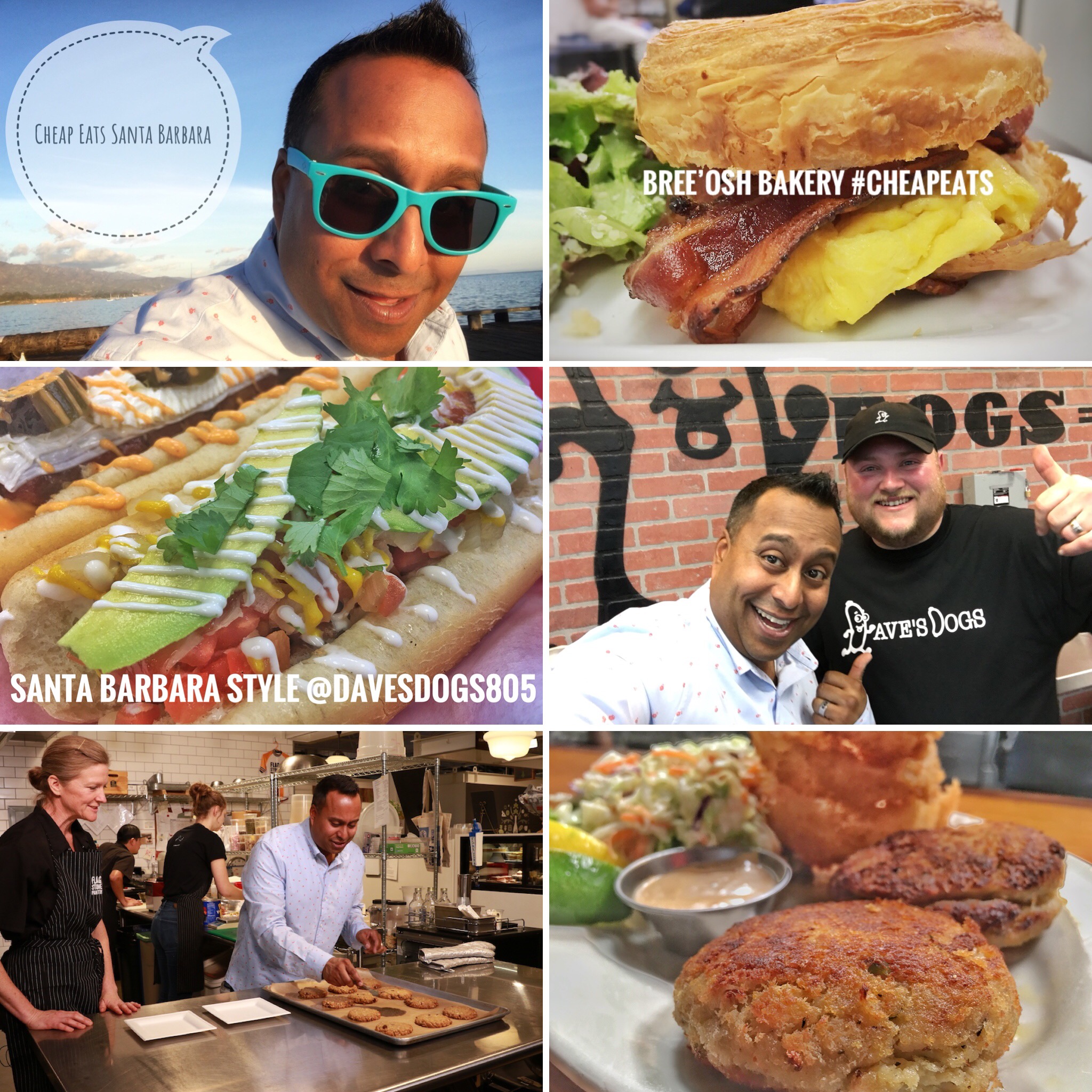 Home to the summer residences of Oprah Winfrey, Tom Cruise, Steven Spielberg, and Julia-Louis Dreyfus(just to name a few), and boasting an average home price around $1.3  million, you probably wouldn’t expect the word “cheap” to be thrown around too often in Santa Barbara. One could even say Santa Barbara is Hollywood’s Shangri-La. But can this gorgeous beach town also double as an oasis of Cheap Eats?  Well, you just might be surprised at the deals to be had. I may not have rubbed elbows with Oprah or Tom Cruise but I did get myself four square meals and almost made my budget. How close did I come to making it under $35? Well, I’m glad you asked . . . 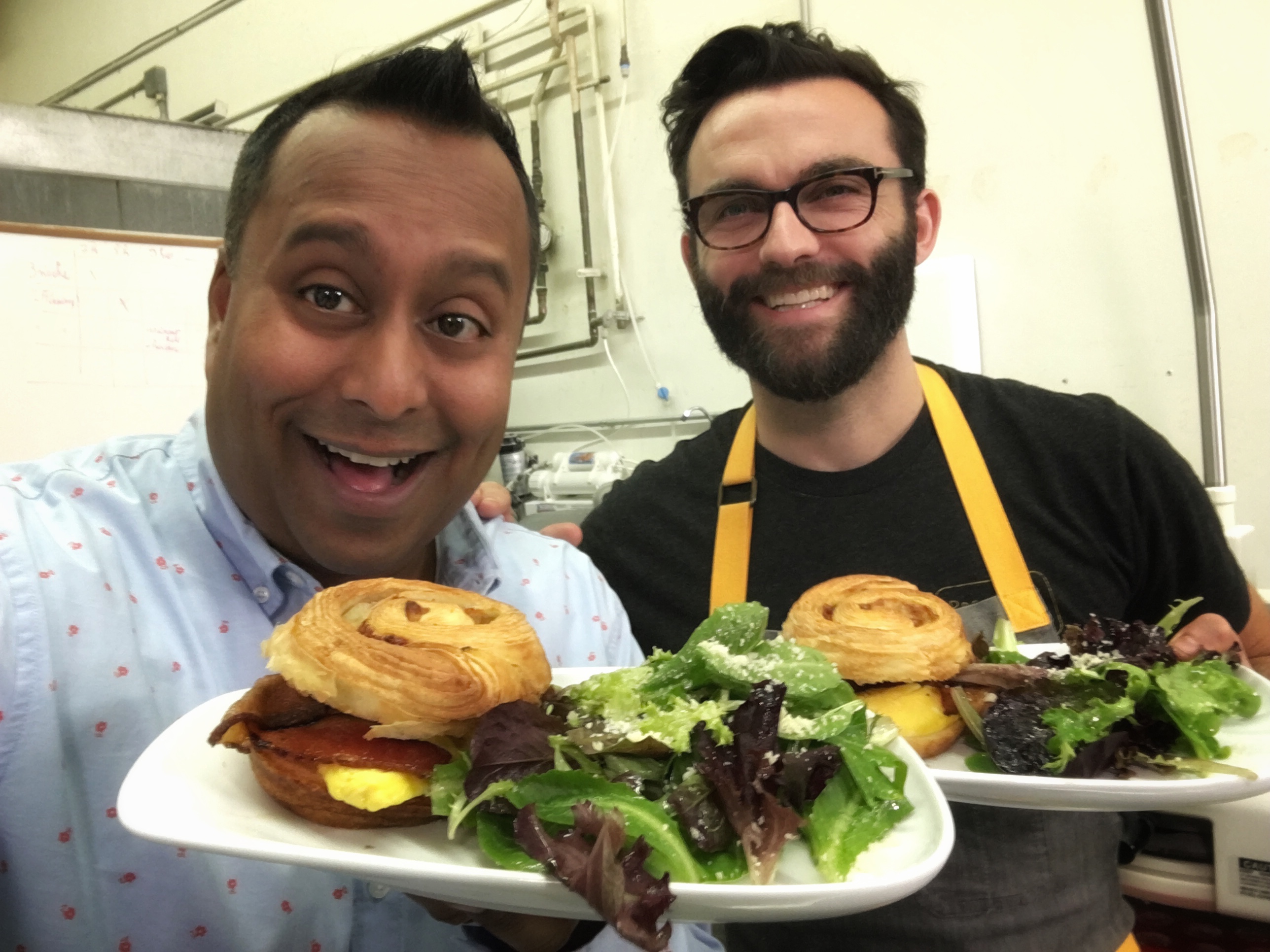 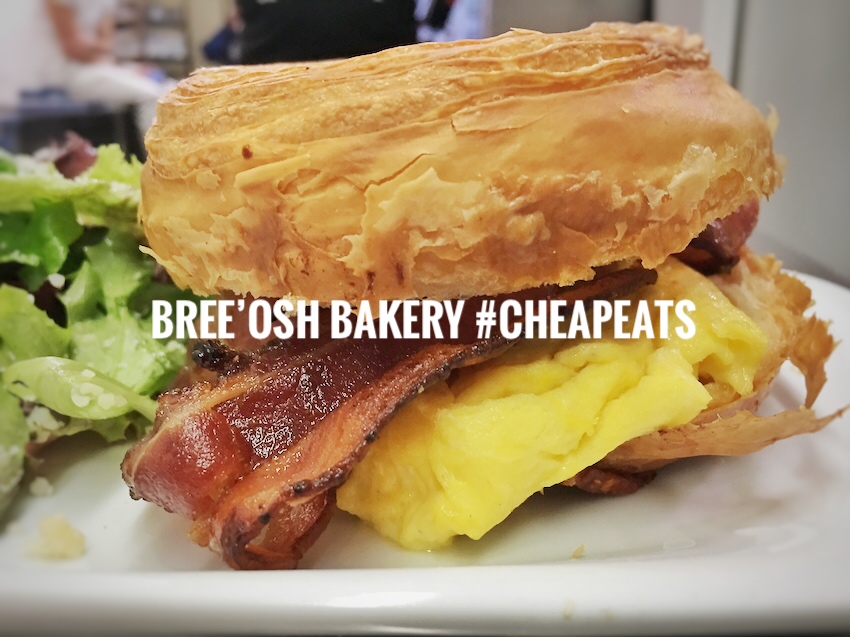 These days it really ain’t hard to find some spot, particularly a burger spot, that is slinging some brioche. The rich French bread draws its signature flavor profile from a solid hit of butter and eggs mixed into the dough and more often than not, it is my burger bun of choice. However not all brioche are created equal. Mostly because not all brioche are made at the restaurant you are eating at. Well expect Bree’osh’s brioche to be made in house(although technically they have an off site prep kitchen down the road) and this brioche is the star of the show. Chef Pierre Yves hails from Brittany, France so it should come as no surprise that his French bread making skills are pretty darn authentic. For us Americans, getting bacon makes the breakfast experience but believe me, the bacon on this sandwich is a supporting character in this breakfast blockbuster; kinda like Hawkeye/ Jeremy Renner in the Avengers movies. I mean, you want Hawkeye around but it’s Captain America or Iron Man that’s rocking the stage. Because it’s all about the brioche at Bree’osh. So think of the Brioche like Cap or Tony Stark, the lunch box your kid wants or the reason why you would go to a bakery like Bree’osh and drop almost $12 on a breakfast sandwich. Not exactly a sterling cheap eat but when in Santa Barbara, this is a breakfast deal for sure. Or should I say THE summer breakfast blockbuster deal of a breakfast? Yeah, I’m really jonesing to see Avengers: Infinity War . . . 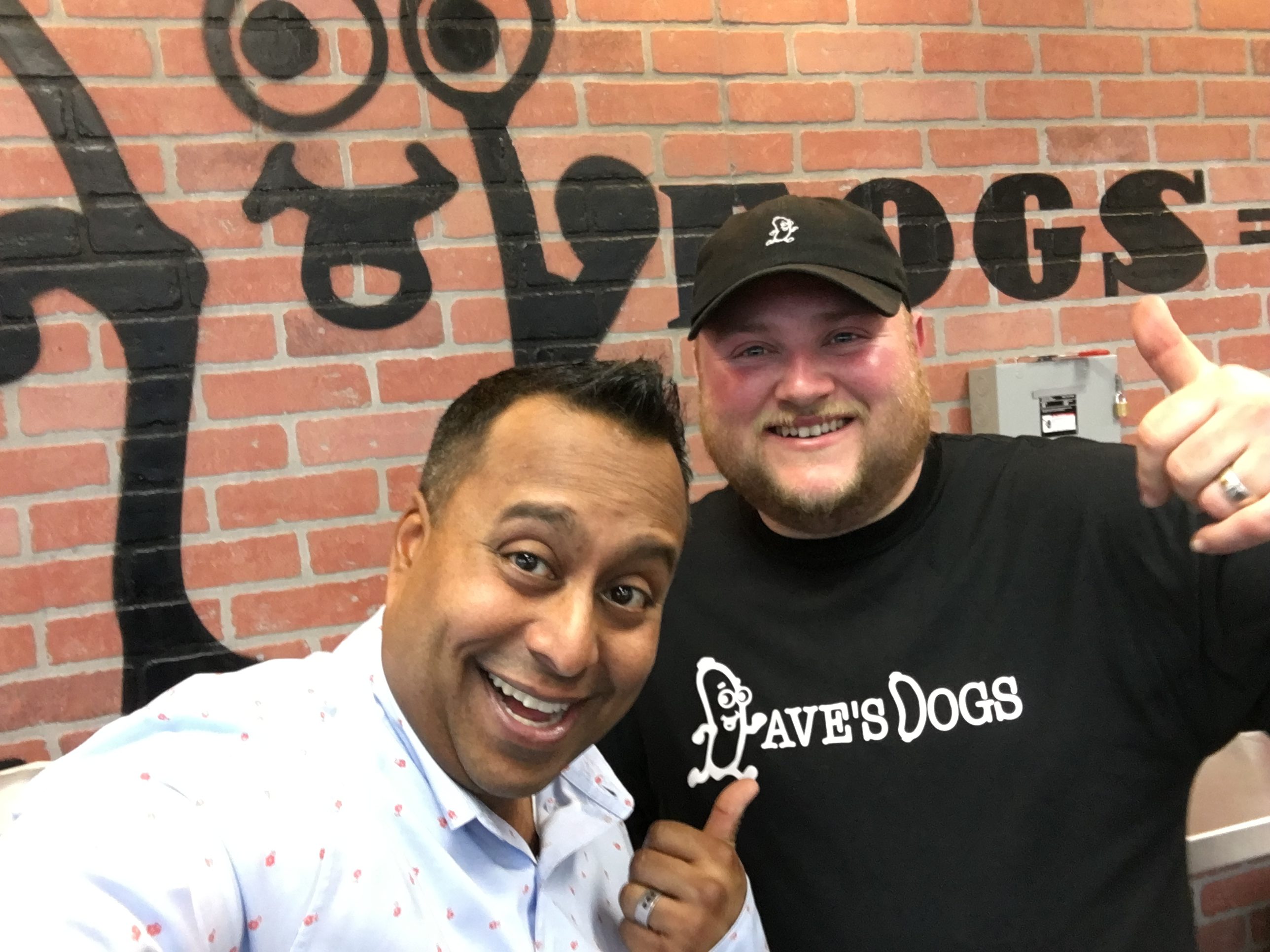 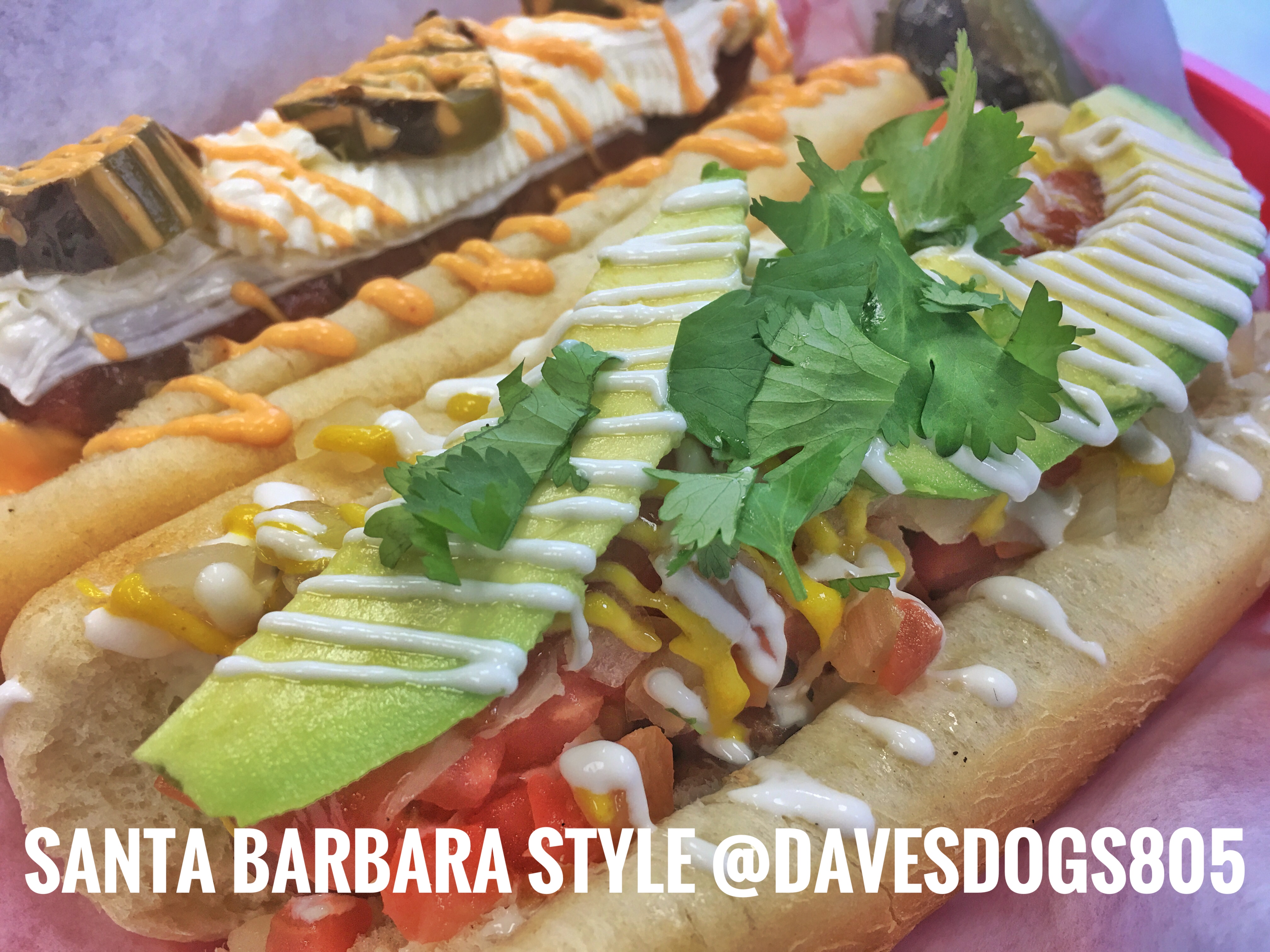 The Vitals:
the spot: Dave’s Dogs 149 South Turnpike rd Santa Barbara CA 93111
the eats: Santa Barbara Style and the Jalapeño Popper
the bucks: 2 for $7
the full nelson:  Instagram worthy Hot Dogs that are thoughtful with flavors as they are with visuals

I can be down right picky when it comes to hot dogs. I typically roll with simplicity when it comes to the matters of all things tube steak. Give me a Boar’s Head natural casing hot dog with sauerkraut and a little stone ground mustard and I am set. Snappy, salty and spicy pretty much makes my ideal hot dog experience. So what am I doing at a place like Dave’s Dogs? Trying to get out of a $12 hole in my budget thanks to that breakfast for starters. And two hot dogs for $7 is a straight up deal, but when you talk to my boy Dave Reyonso, hear about his passion for hot dogs and break down the why’s on his toppings, you realize two dogs for $7 is a straight up steal. Let’s start with the Santa Barbara dog first and with a name like that, you know I had to order one. First off Dave uses either Vienna all beef or Hoffy natural casing hot dogs, so right there you know Dave’s Dog’s ain’t no 7-11 with dried dogs on the spinners – these are quality wieners. Beyond being a stunning looking hot dog, the Santa Barbara takes its topping inspiration from the backdrop of Mexican food culture in Southern California. Avocado orchards are part of the landscape and folks here are down for crema: the Mexican version of sour cream that possesses the consistency of créme fraiche, both of which find there way on the Santa Barbara dog. As do cilantro and tomatoes, also important ingredients of the Mexican pantry, along with mayonnaise and the bacon is a clear nod to the classic TJ or Tijuana style dog that is a staple of late night street food in SoCal. Grilled onions add an element of deep savoriness,  and how can you not have mustard on a hot dog? I would normally leave off the ketchup but when in Rome or in this case, Santa Barbara, do as the Santa Barbarans do. The sum total of all these topping components is reminiscent of a Mexican Shrimp Coctel(cocktail) where the the sweet tang of tomato sauce dances with chunks of avocado, sprinkles of cilantro and crema but this is all going down on a hot dog! And if that isn’t enough for your $3.50 lets move on to the Jalapeño popper where the inspiration is drawn from . . . yup you guess it, a jalapeño popper. Jalapeños are blistered on a flat top before getting sliced and layered on a bacon wrapped dog along with cream cheese and spicy mayo. Dave was convinced that a Jalapeño popper themed dog would work and I gotta say this . . . how could it not? Well actually, plenty of ways. See his food has an automatic draw because we are in an age food porn-shock value. But what is truly shocking is that these are well thought out flavor combinations that absolutely work. They may sound like “everything but the kitchen sink” on paper but the dogs are topped smartly; not overwhelmed by amount of ingredient or over powering flavor. I can honestly say there are few, if any chefs out there putting this much thought into hot dogs like Dave Reyonso. And at two for $7, you really cant find a better Cheap Eats deal in Santa Barbara. 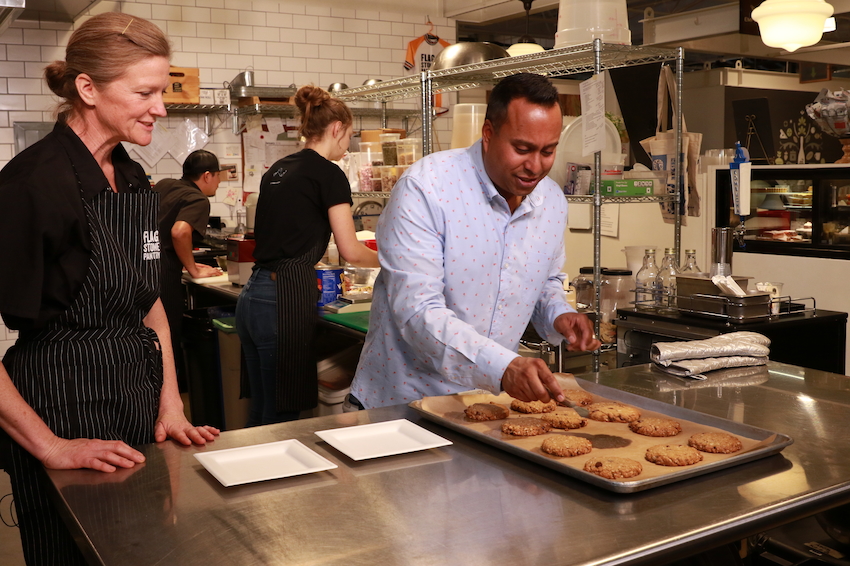 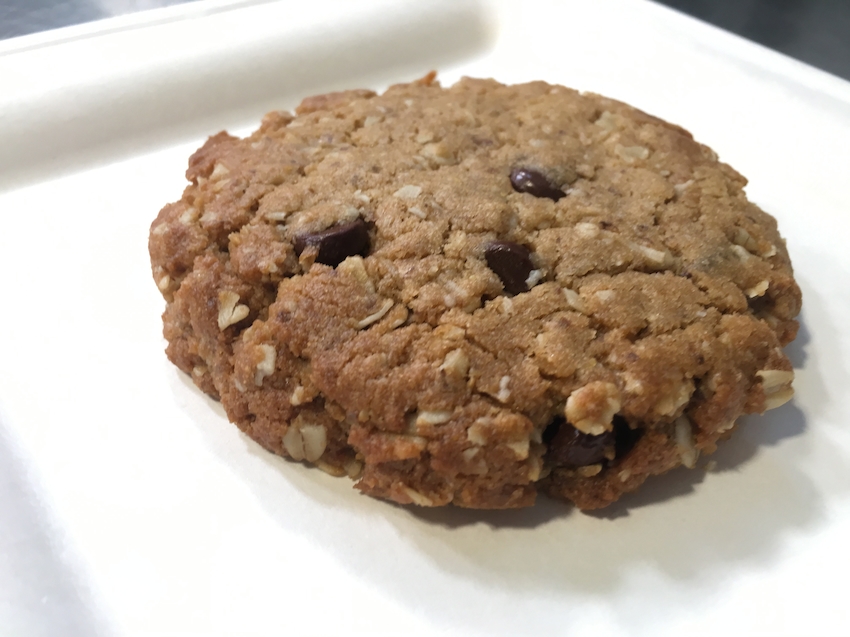 Nestled inside the Santa Barbara Public Market(a food hall I would highly encourage you visit) is Flagstone Pantry, a full kitchen and retail spot offering up well sourced fare that range from healthy to conservative indulgence. Since I was still reeling from that pricey breakfast, I set my sights on a conservative priced snack and the cowboy cookie, clocking in at a mere $2.50 was certainly that. The thing is, it is also a vegan cookie and your boy is far from vegan. Not that I don’t like vegetables, fruit or the concept of eating foods not made from animals, its just that I like it all. Now when it comes to cookies, you might say I’m bit skeptical that one can pull off a sweet indulgence without the use of dairy but thank goodness for the magical powers of coconut and to chef Kristen Desmond who trained at the National Gourmet Institute with an emphasis in health supportive culinary arts. The key to pulling off this vegan cowboy cookie is the use of coconut oil which makes for a perfect substitute for butter. At first glance the oil, which is solid at room temperature, looks an awful lot like lard, except rather being made from rendered pork fat, is made from the flesh and water of a coconut. This stuff might be plant based but it tastes very rich and yeah, its high in saturated fats, so don’t think this is a 100% healthy substitute for butter; but I’ll take a cookie made with coconut oil over olive oil, any day. They call it a cowboy cookie because it is as hearty as it is rich: this cookie packs a punch of flax seed and oats in the dough; fine filler for a life on the Chisolm trail. I call it a killer cheap eat because it costs $2.50, has chocolate and peanut butter in it and scores me some much needed points with PETA. Well, maybe like half a point. 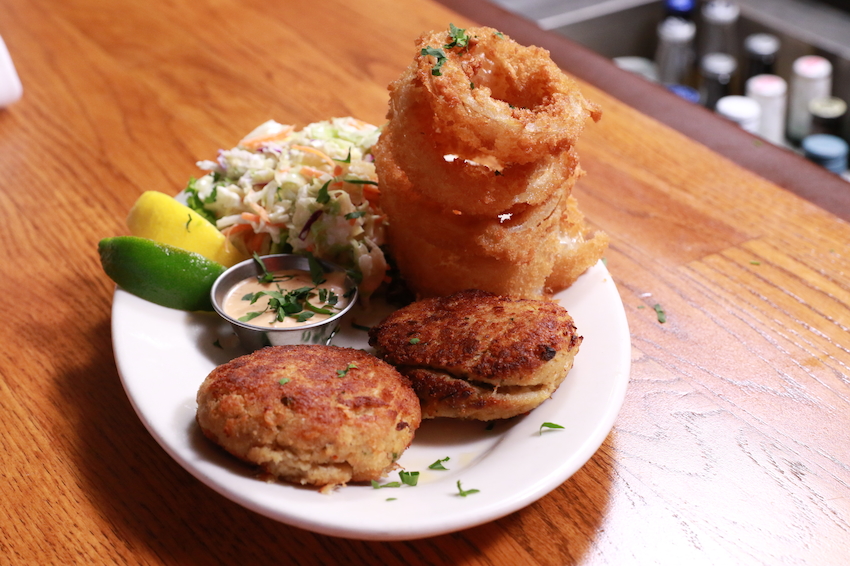 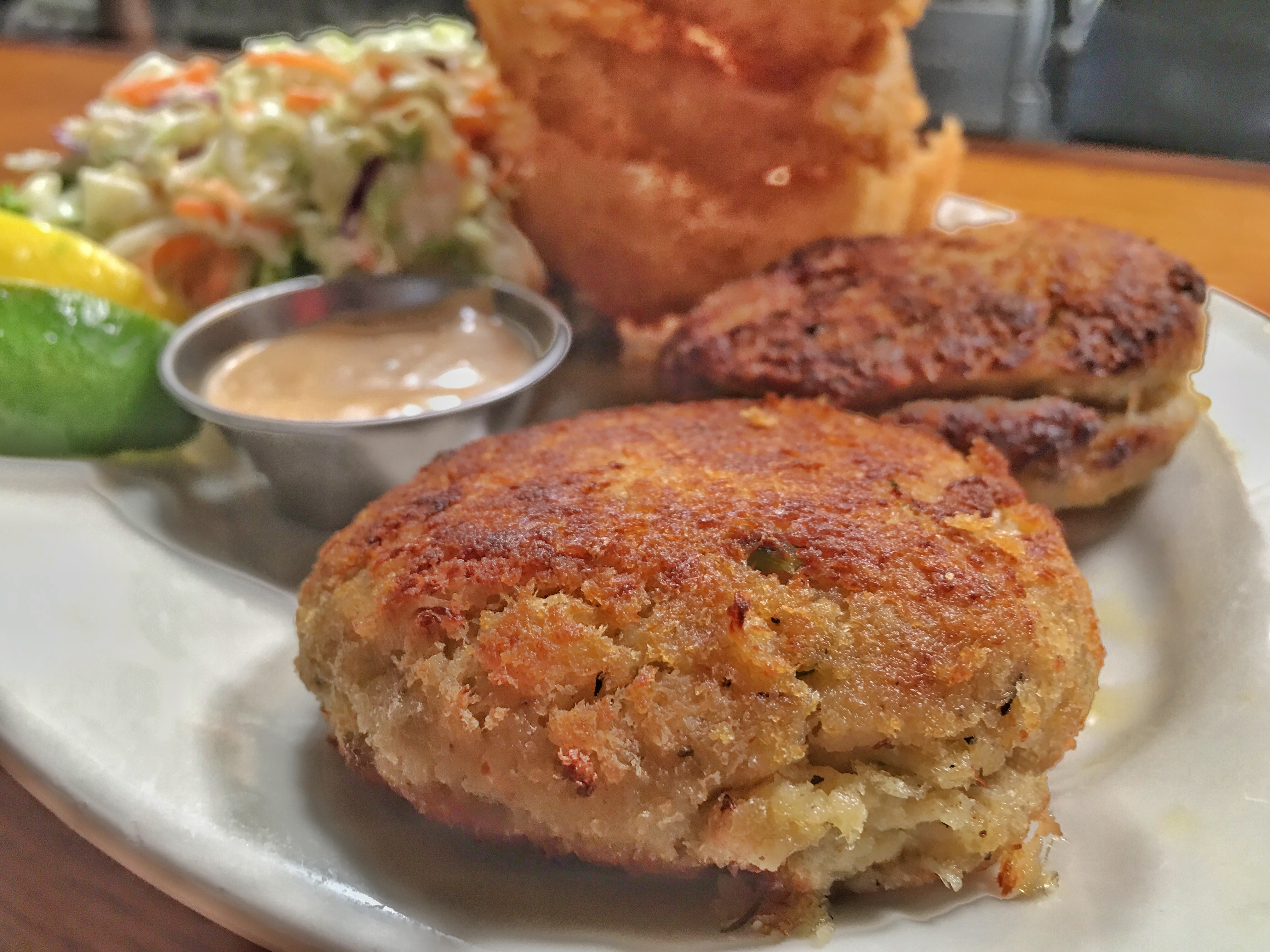 Seafood just ain’t cheap but it can be cheaper if chefs pull off some moves like breaking down whole fish or buying direct from fisherman, both of which happen at Santa Barbara Seafood Company. Now the focus here is shellfish, so you won’t see any whole bluefin tunas getting turned into sushi but you best believe they get their shellfish direct from the fisherman; it is a cornerstone of the business concept. Started in 1980 by Chef Adam White’s dad, Santa Barbara Shellfish Co was originally a shellfish market before becoming a full service restaurant. There is shellfish a plenty here and the real eye catcher are the seafood tanks loaded with fresh local caught crab, with sea water literally being pumped from below as the restaurant sits on a pier. Now there is no doubt most of this menu is well beyond the Cheap Eats budget and yes, I did break my budget on these crab cakes but aside from going fishing yourself, you’re just not gonna get fresher crab cakes. Served with a coleslaw and fried onion rings you will certainly not walk off this pier feeling hungry. If anything be mindful of the eventual food coma and hook a left down the pier vs a right . . . otherwise you might be taking a dip into the Pacific!

And that is how you do Cheap Eats in Santa Barbara!! Yes, I did break the budget but when you consider the rent they charge in this town(avg of $4500 a month!) I think I did just find and I definitely wasn’t shy with the portions thanks to the generous peeps slinging Cheap Eats in the SB! And believe it or not, I hit up even more places so be on the look out for some more Cheap Eats in Santa Barbara coming at you here on Bang for your Burger Buck. Add to that we are only two episodes away from wrapping up Season 4 of Cheap Eats! So as always, stay hungry(and thrifty) my friends . . .