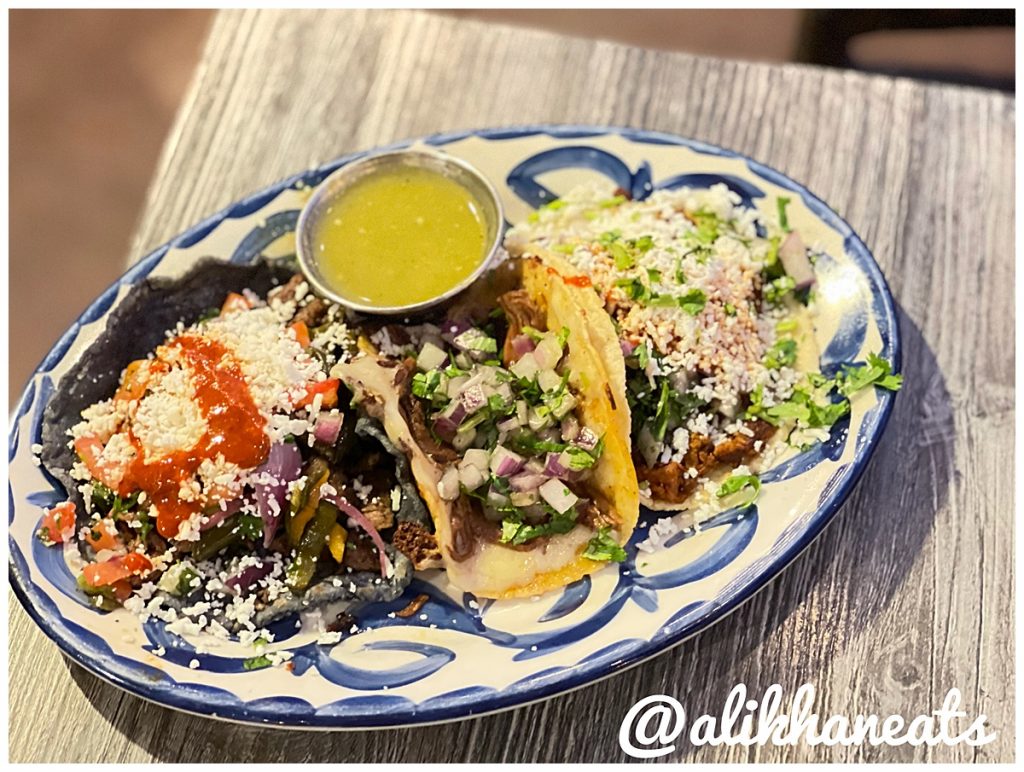 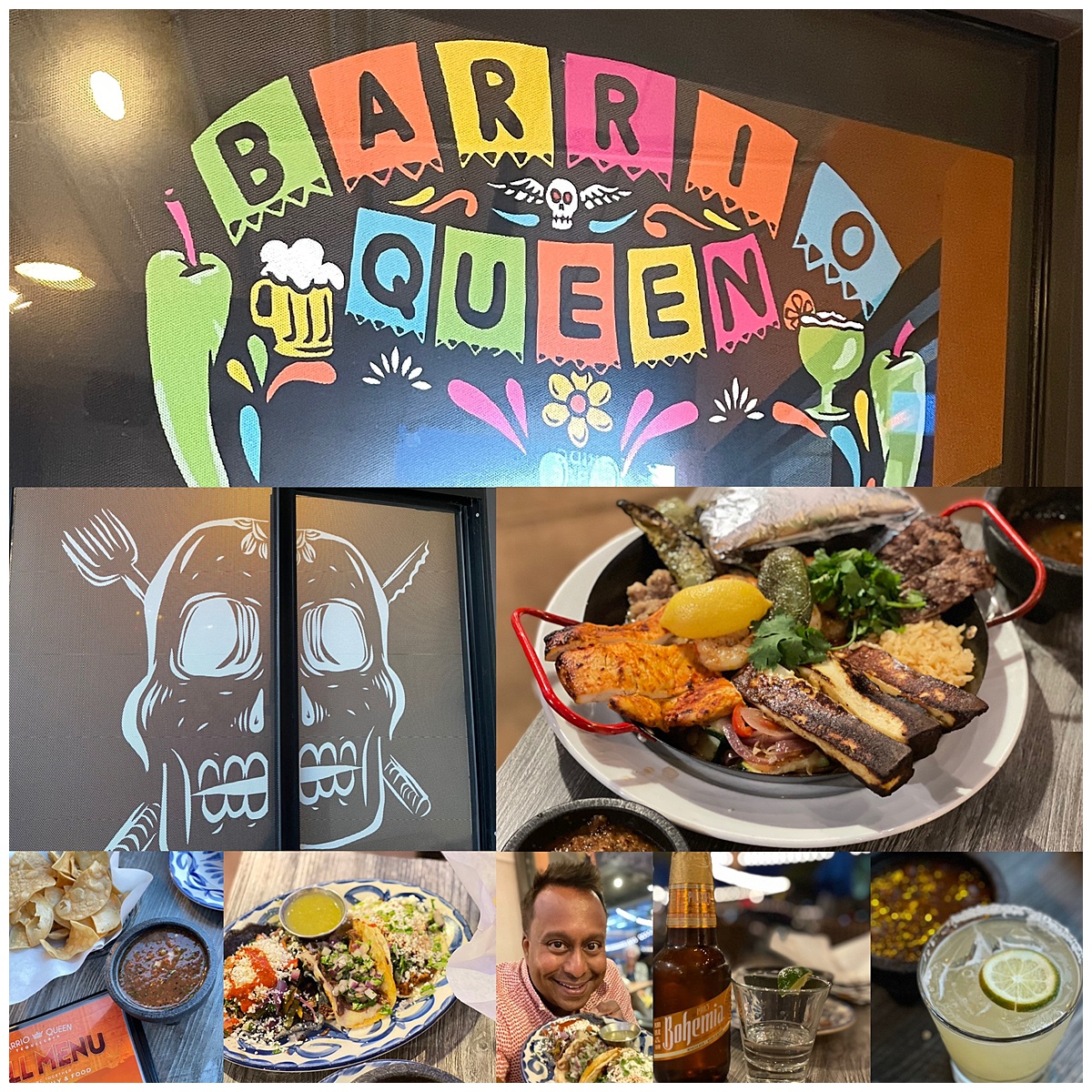 The Vitals:
the spot: Barrio Queen multiple locations in Phoenix-Scottsdale area
the eats: Molajete/Cazuela entree, tacos
the bucks: $14-$30 a person
the full nelson: Sit down Mexican with an expansive menu that leans towards Authentic

A couple weeks ago I was back in Scottsdale AZ, where we wrapped up Cheap Eats season 4, but this time I was shooting a new show for Food Network(shhhh). After I finished shooting I made tracks for some Mexican eats in old town Scottsdale. I also had some guidance from Arizona food writer Jackie Alpers who gave me a ton of suggestions over Twitter DMs(follow her @jackiealpers). And that’s how I got here: 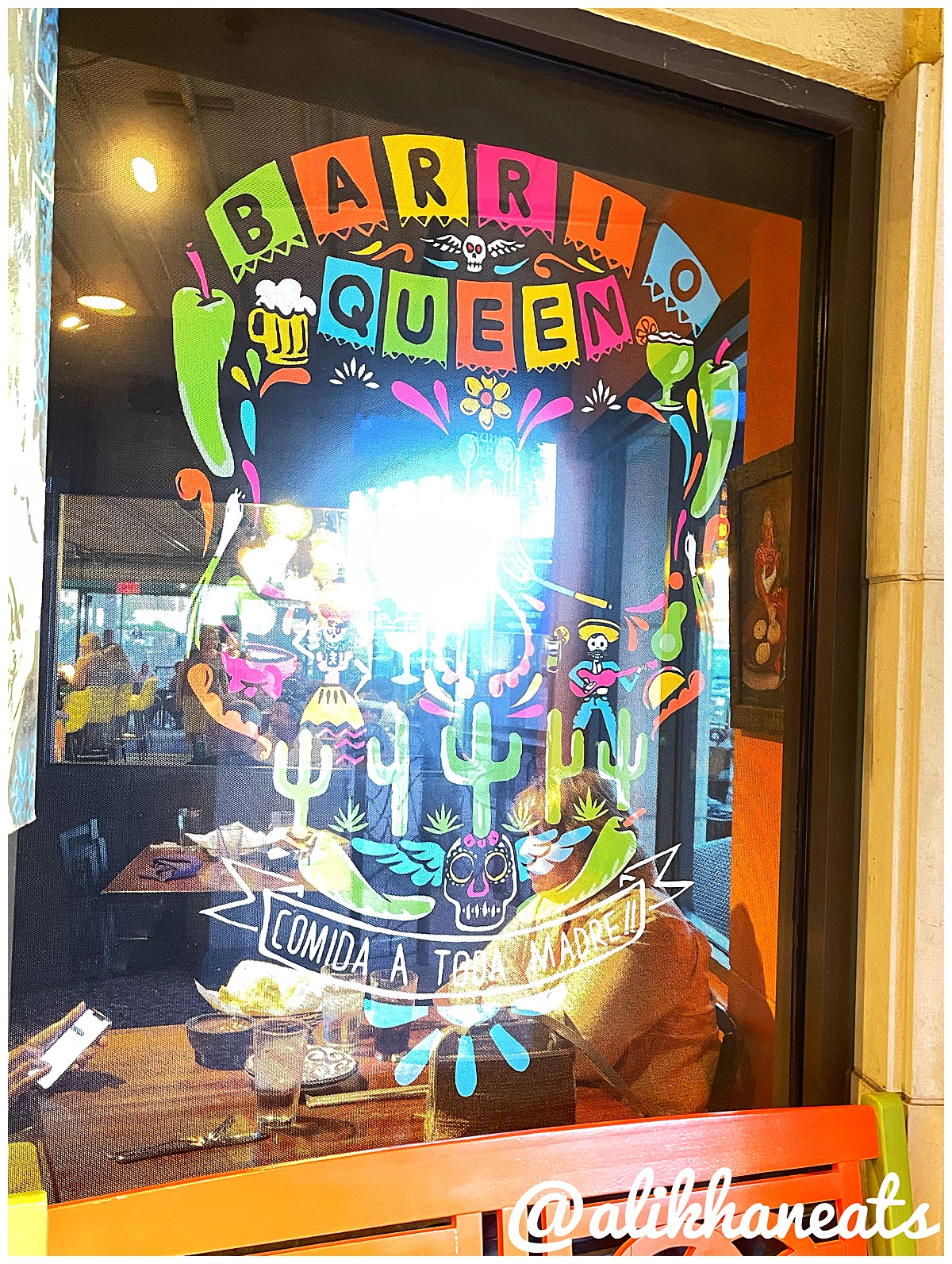 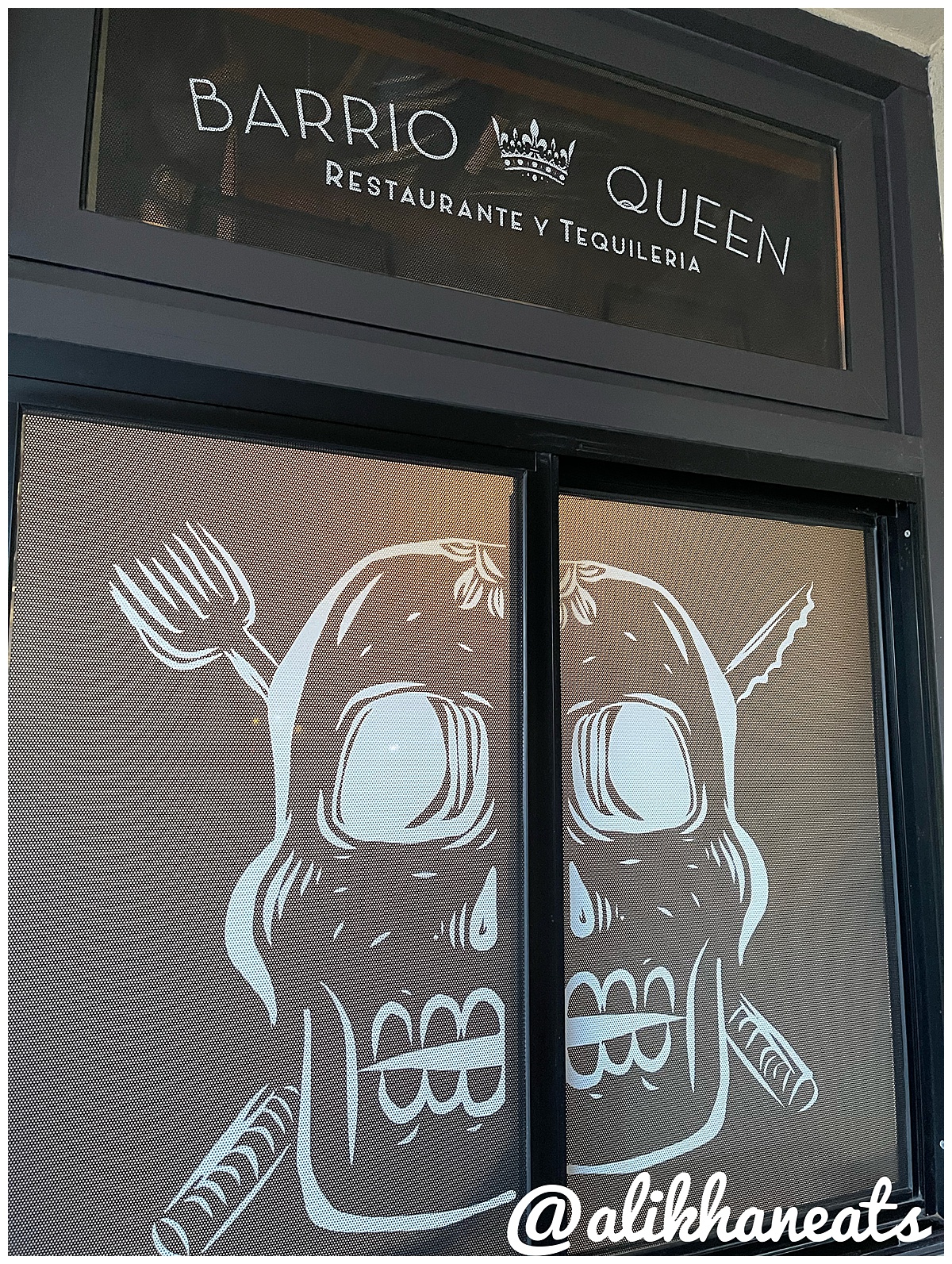 This Queen got style.

At least as far as the branding goes. Just like a bottle of Espolon tequila, that Dia Del Los Muertos design absolutely draws me in. For the record there are a few locations of Barrio Queen around the Phoenix-Scottsdale area, but I assume the vibe carries over to the other locations too. 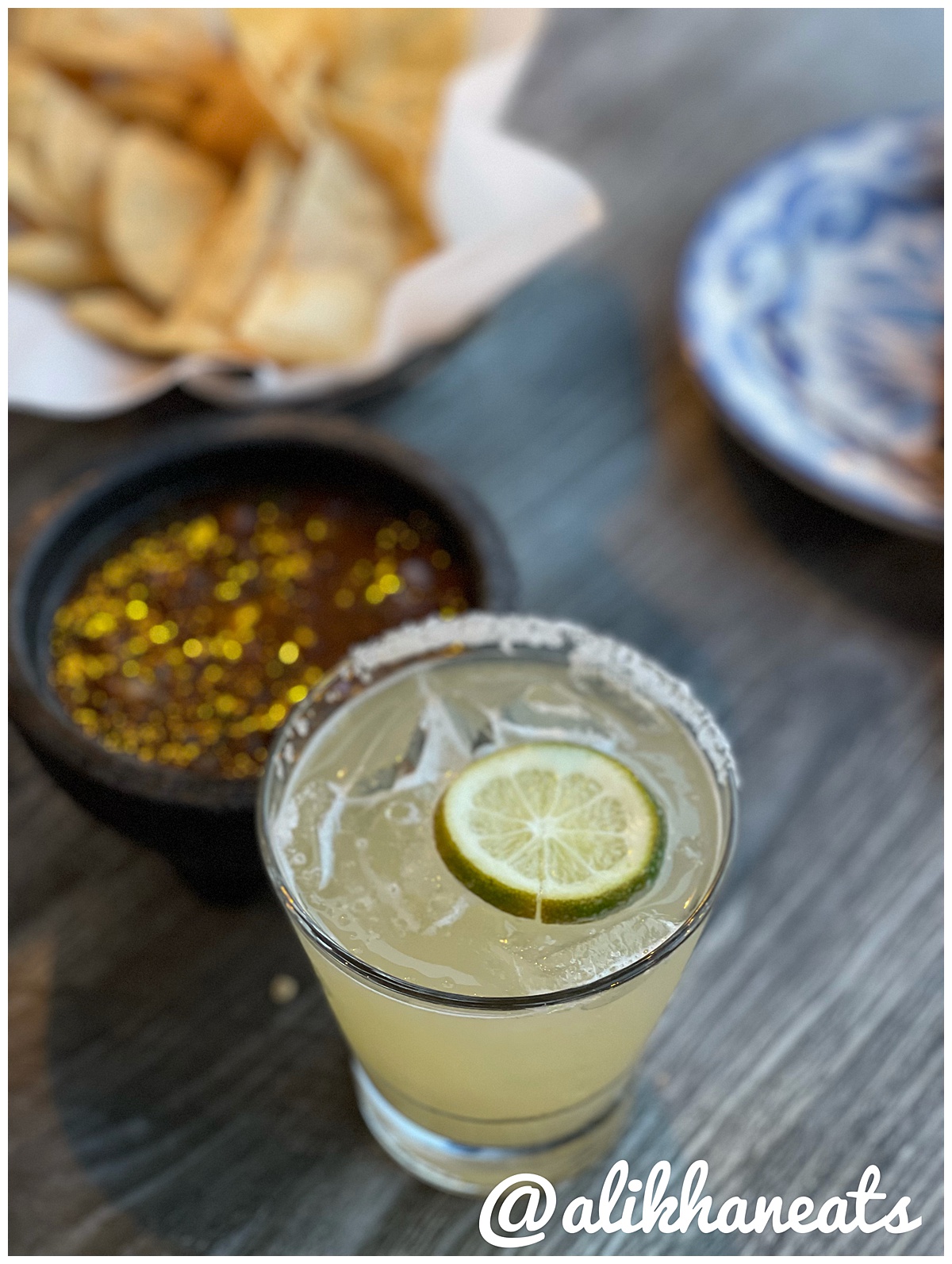 It’s gonna be hard to avoid the chips and salsa at Barrio Queen. They drop it on the table within moments of you arriving. Frankly I try to resist the filler but the chips were fresh out the fryer and hard to resist. I think I ate two baskets.

Now I should note that when it comes dining out for Mexican, I have two speeds: taco truck and modern. The latter being a place with a cocktail program and an assumption that food is going to be traced back to specific regions of Mexico. I’m not a Tex-Mex, combo entree kinda guy. I don’t need to see the word “authentic”, if anything that assumption is what brought me here in the first place. 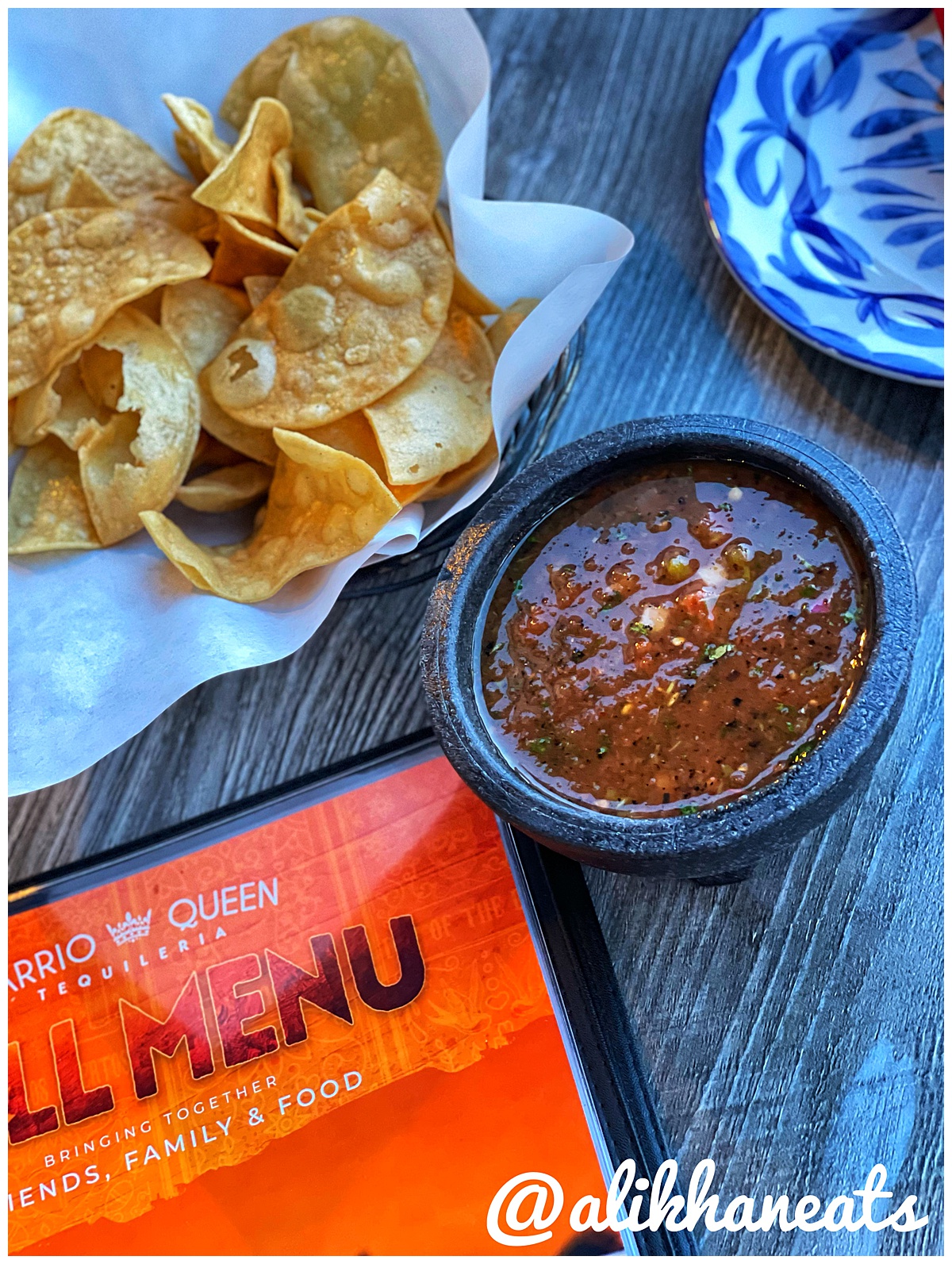 Barrio Queen is authentic but also has an expansive menu. It strikes as family friendly and the place you grab margaritas after work but that’s not too say it’s cheap either. I navigated the drink menu to their house margarita which ran me around $10. I’ve made better margs at home but this was also a stiff drink. And I like that. 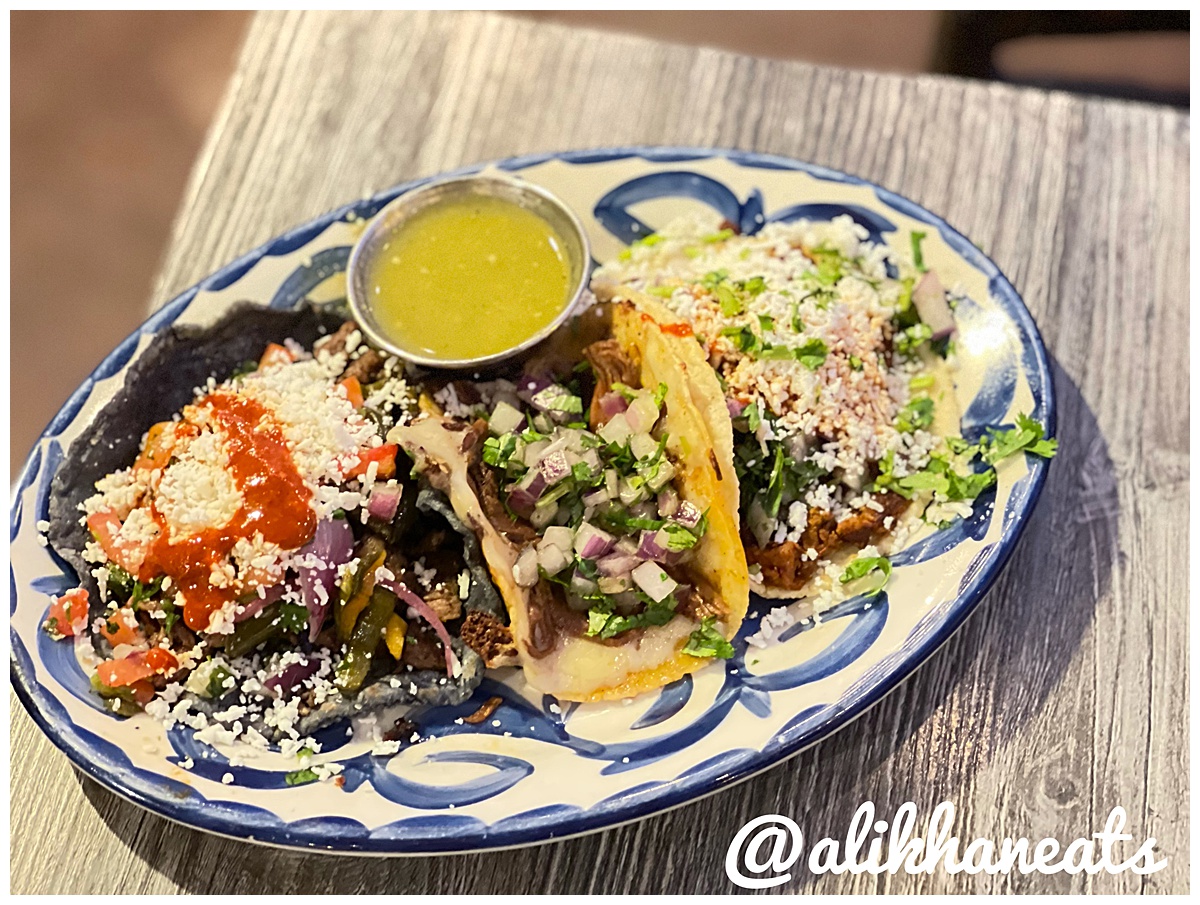 I knew I had to take a decent dive into the menu so I started with a couple tacos. There’s two sections of tacos on Barrio Queen’s menu. The “regular” taco menu features 21 different tacos that run $4.50 each or you can get 3 for $12. Then there is a “premium” taco menu that features five tacos that include the likes of Birría, Steak and Shrimp and one of my favs, Alambre: a steak taco cooked with peppers and onions that holds the promise of what fajitas should be. I went with premium.

This was the best of the bunch. Loaded with steak and peppers, this taco had zip and zing thanks to a soy sauce and lime marinade. I would get these again in a heartbeat.

Short ribs are braised in an earthy chili broth till fall apart tender. Then it’s hit with melted Oaxacan cheese. You can’t have birría without broth, at least in my book. The short ribs were a nice touch but if they had served it with some birría broth on the side, that Alambre might have serious taco competition.

I love gringa tacos. Basically an open faced quesadilla(yes such things are possible), Al Pastor is shaved from the vertical rotisserie before being with cheese and a tortilla and then getting seared on a plancha(flattop grill). I’ll be real here: this Al Pastor did not taste like it came off a spit(trompo).

All in all I didn’t love these tacos but I would get the Alambre again and maybe try some of the tacos from the regular menu like carnitas or asada. 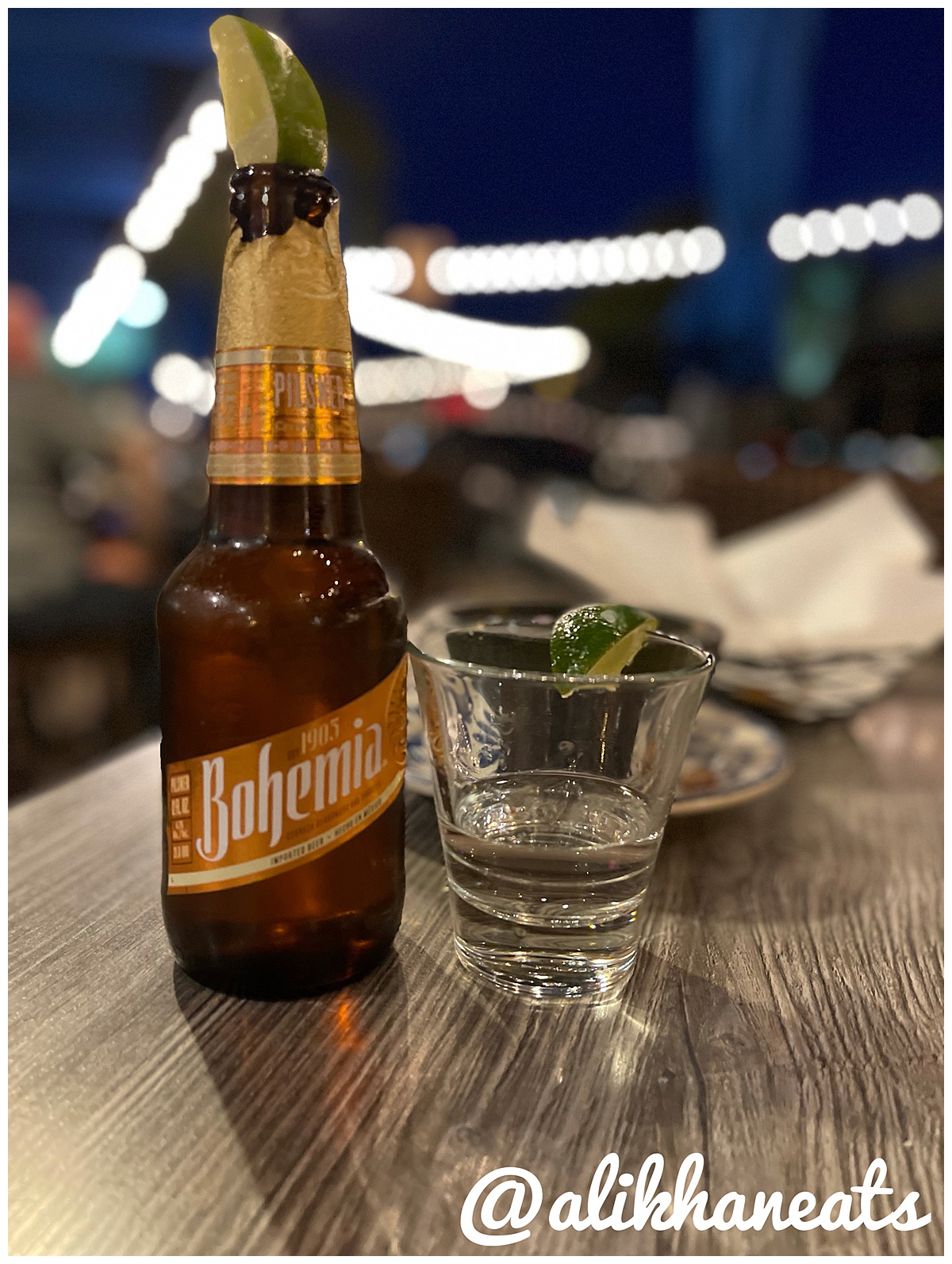 Intermission: beer and a shot

Earlier I said that Barrio Queen was a chips and salsa and margs kinda place. That also means it’s a beer and a shot kinda place too. They had a decent selection of tequilas and mezcal. More than a few were reasonably priced too. Now back to eating. 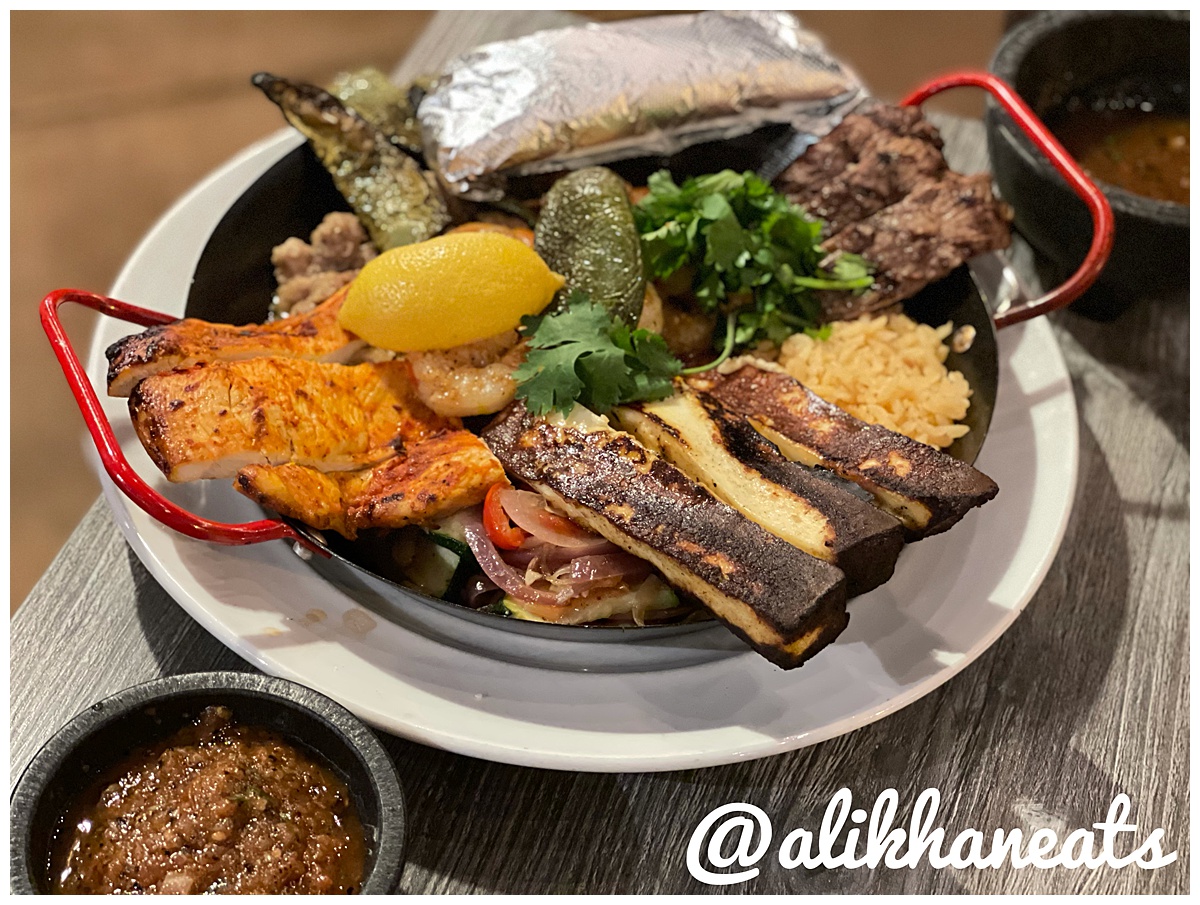 If there is one thing I’ve learned after dining at Barrio Queen it is this: always order a Molcajete, or in this case a Cazuela. Despite the name change the concept is the same: load up a dish with a ton savory things, break off a tortilla and get you some. I first encountered a Molcajete(same as Cazuela but in coarse stone bowl) in Santa Barbara at a place called Los Agaves. Barrio Queen wasn’t quite as good but I would absolutely get this shareable platter again in a heartbeat.

Mine came loaded with chicken, steak, shrimp and fried queso fresco, rice and beans, sauteed vegetables, and pork braised in tomatillo and poblano. Oh and it came with like three tortillas. It should have come with a tortilla factory, there was so much food. I asked for a spicier salsa than what came with my chips too. The stuff they give you at first is tasty with a nice earthy draw but daddy needed the heat. The waiter came back with habanero salsa, nothing “hot ones” level but I enjoyed it nonetheless. 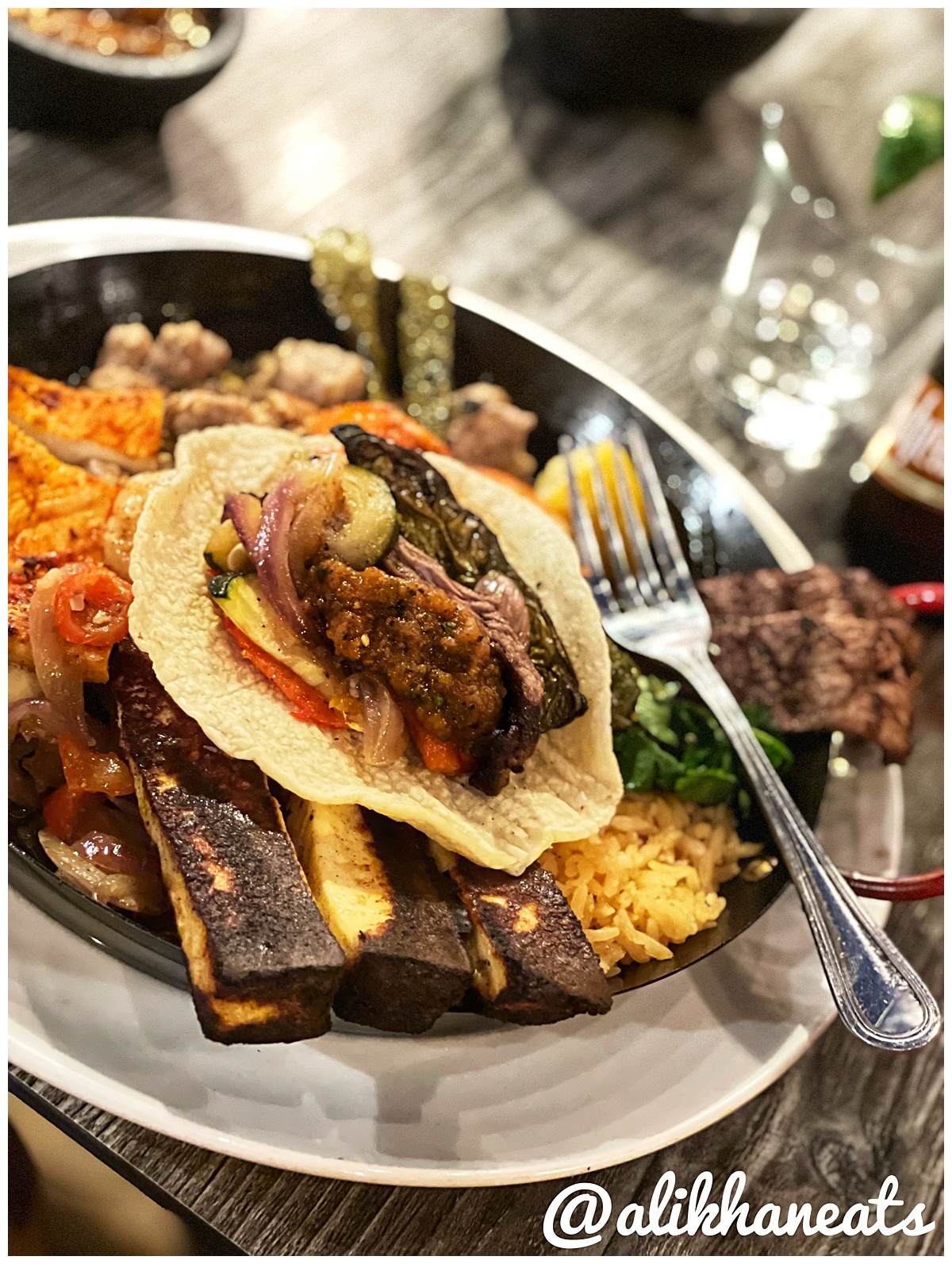 The Cazuela is a must order. And the star of the whole thing was the pork braised in tomatillos and poblano. That plus some rice and beans in a tortilla and that habanero salsa= game over.

I’m sure there is much more to be had when it comes to Mexican food in Phoenix but all in all, if you’re in Scottsdale I would jot down Barrio Queen as an easy to please option. I’d skip the tacos and go for the Cazuela or some of the entrees like the braised pork, maybe a molé etc. I ate that Cazuela for the next three meals. And I didn’t regret it for a second.